In this story from the Love + Radio podcast, a chance meeting in the Nevada desert that leads to a series of court battles that lasted for over 30 years.

Love + Radio comes from producer Nick Van der Kolk. He and his collaborators make strange and intense sound stories while aggressively bending and breaking almost every rule of conventional radio. Plus their topics are bloodier, stranger and dirtier than anything you'll ever find on your car radio.

The Man in the Road is the story of a man named Melvin Dummar, told mostly in his own words. In 1967 he picked up a man lying in the Nevada desert and gave him a ride. It was a chance meeting that turned Dummar into a 1970's media celebrity. 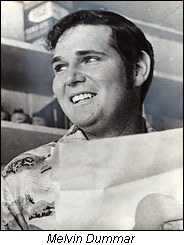 You can hear more stories at loveandradio.org.