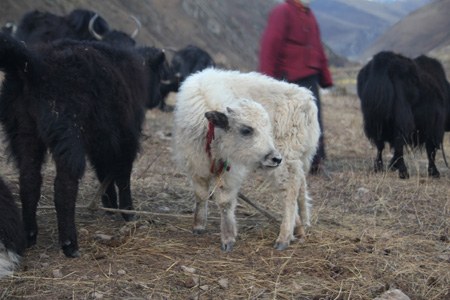 In the Kham region of Tibet, there are families who have been nomadic herders for thousands of years. Almost everything they need, they get from a herd of yaks who graze on the wide expanse of grassy hills within sight of the distant peaks of the Himalayas.

Last fall, producer Stephanie Guyer-Stevens went to Kham and met a family of nomads and their yaks. She heard about the spirits that protect the holy mountains, and learned about some yak economics. Families now send their kids away to school, and there is increasing pressure for them to join the modern economy.  The nomadic life is gradually fading away.

Produced by Stephanie Guyer-Stevens and edited by John Biewen.  Produced for Outer Voices.

Thanks to the Shelly and Donald Rubin Foundation, Lucius and Eva Eastman Foundation, and Terry Causey for their support of this work. Special thanks to advisors Françoise Pommaret, Alex Gardner, Robbie Barnett, Annabella Pitkin, Wade Davis and Ariana Maki. Also thanks to Karma Lhamo and Demba Jhyentse, Gesar archivist and storyteller and to Tsebtrim, guide and translator. 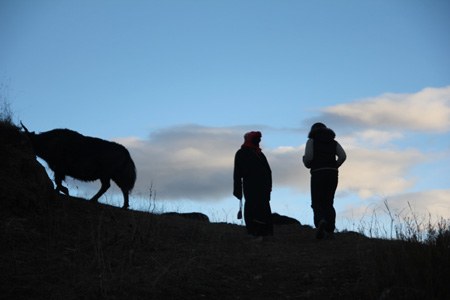 Producer Stephanie Guyer-Stevens, on the right,
walking with the shepherd in the early evening. 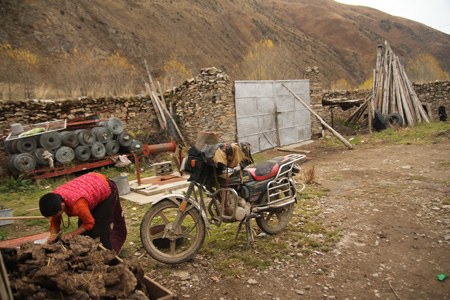 Inside the front gate of the winter house.
On the left, over by the dung box is the nun of the family.
Nuns and monks only wear clothes in shades of red and orange,
even when they're not in their robes. 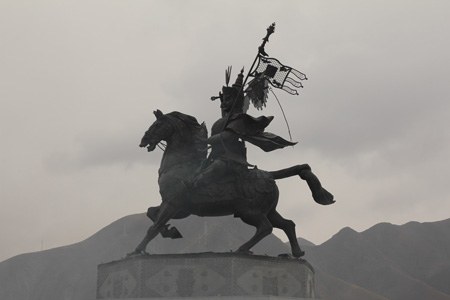 This is the statue of King Gesar in the center of Jyekundo.
There was an earthquake here in 2010 that demolished almost the entire town
and much of the area of Yushu prefecture around the town.
But King Gesar was untouched.