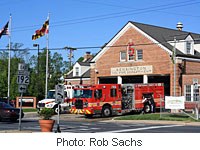 Kensington, Maryland is a town just outside Washington DC and like a lot of small towns, they use a volunteer crew of firefighters and EMT's to work overnights and weekenights when the career paid force is off duty. But unlike other stations, Kensington offers its volunteers a special incentive, if they're willing to pull four shifts a week. A lot of these volunteers are young people, and they can get money towards their education and even a free place to sleep in at the firehouse. Producer Rob Sachs lives in Kensington and he spent a week hanging out with the young crew to see how living at a firehouse changes these young men and women, and what they learn, as they spend their time saving others.

Next, a story about rescue workers from the other side of the equation, the rescued. Writer and producer Eric Friedman tells the story of a simple "Big Brother" outing with young boy that turns embarrassingly awry. He's trying to show his young friend the importance of spontaneity, but the spontaneous "off the trail" decision ends with a wrong turn and a helicopter "rescue."

Eric Friedman is a TV writer and producer who's in the middle of creating a pilot for Disney XD.

KCRW's Tom Schnabel was a Los Angeles County life guard for years. He's faced danger and saved lives, but a lot of people only want to know about one thing. It involves women in swimsuits running in slow motion.