Next... a story about a person, who's in danger of blowing up at any moment. Doug’s father had reached a point in his old age, where he had become an unpredictable danger to himself and others, and Doug was determined to try and swoop in to fix everything. But diffusing a bomb is a delicate operation, and Doug soon found out that a human bomb who happens to be your father, can be the most dangerous of all.

Doug Bost is a screenwriter and short story writer living in Brooklyn. He's written a short film called Policy of Truth, about experiences with his dad and Alzheimer’s. It’s currently on the festival circuit. 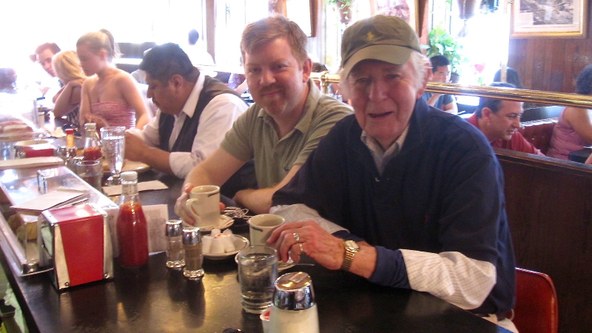 Doug Bost and his Father Jim
Courtesy of Doug Bost

When It All Blows Up

First... a story about a wrong guy in the wrong place, with all the wrong documentation. Moran Cerf is an actual person who really seems to have stepped out of a novel. Born...

Next... a story about a person, who's in danger of blowing up at any moment. Doug’s father had reached a point in his old age, where he had become an unpredictable danger to...

Finally... a story from Greg David Jones, who served in the army, where real bombs and real danger are an every day concern. And where a little luck might save your life.