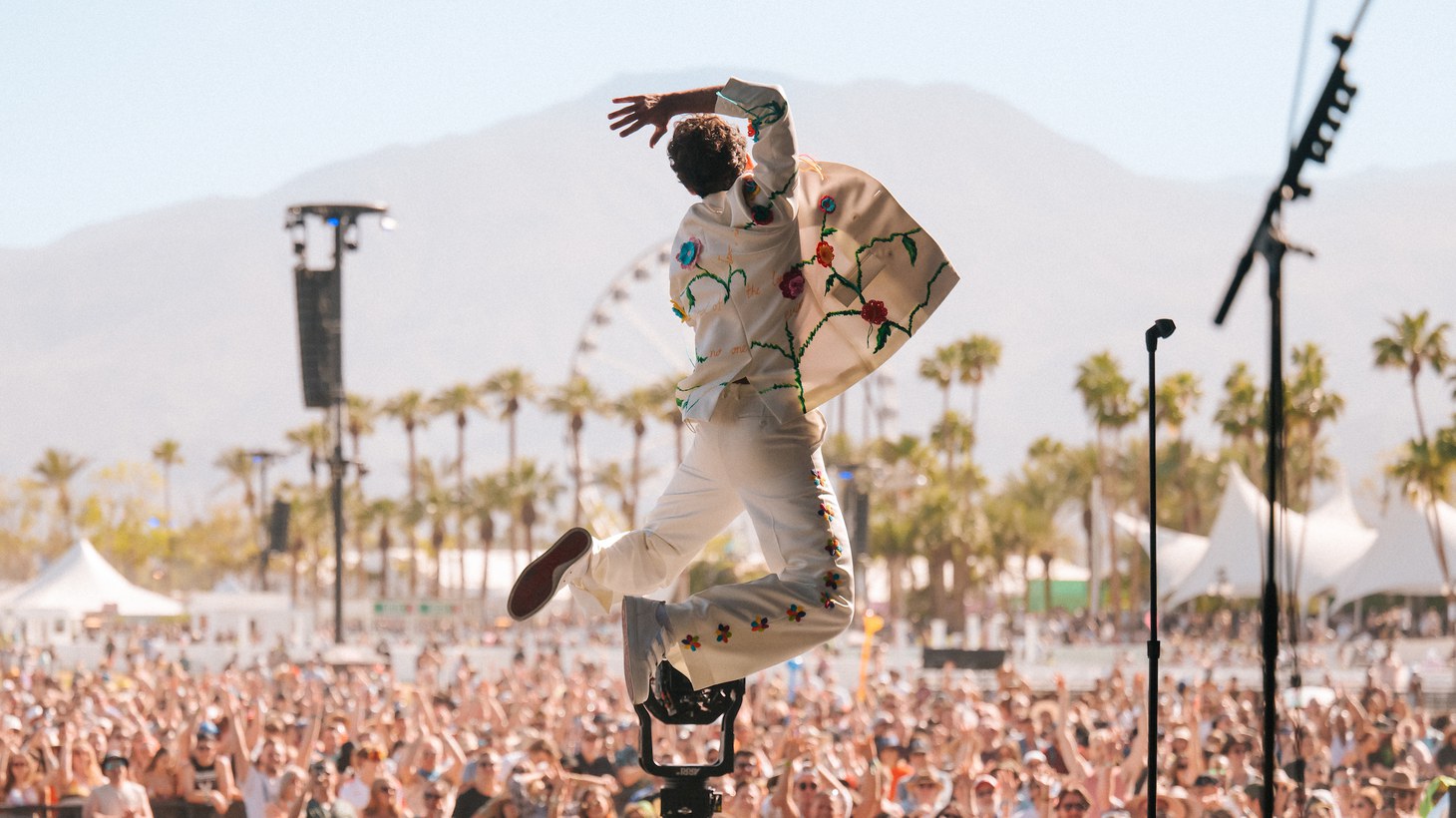 Mika performs at Weekend 1 of Coachella 2022. Image courtesy of Goldenvoice.

Each weekend of Coachella comes with its advantages and disadvantages. Weekend 1, of course, offers that first-taste excitement, rife with surprises, spectacle, parties, run-ins, and ye olde bragging rights (and this year, a short-lived window of what briefly felt like pre-COVID normalcy). But it’s also overrun with influencers and industry ilk — not everyone’s bag — and there are inevitable logistical kinks still being worked out.

Weekend 2 is for the heads. What it might lack in novelty sheen and clout (or add to anxiety with rising COVID cases), it makes up for with a generally smoother operational flow, warmed up artists, and a crowd that cares more about seeing than being seen. Plus, you get to reap all the pro-tips and recommendations from folks who came the weekend before to make the most out of your time (wink wink).

KCRW’s intrepid music staff ventured into the 125,000-person crowd of the polo fields last weekend to hand pick Coachella’s can’t-miss musical offerings and gather some key dos and donts for surviving and thriving at the megafest’s great return.

Easter was last weekend, but plan on going to church with this one. Heavenly sonic conjurer Jason Pierce, a.k.a. Spiritualized, is back with a magnificent new album “Everything Was Beautiful,” and this release day set in the intimate confines of the Sonora will be one for the books (and worth lining up early for). Expect no fewer than nine people on stage, including a chorus of backup singers and at least three guitars, as Pierce and co. veer from the contemplative to the ecstatic to the chaotic with a famously stirring, explosive live performance to give you your weekend dose of transcendence. — Andrea Domanick

This is lowkey the party event of the weekend. The Miami duo carry the torch for the Magic City’s rich lineage of twerk-worthy booty bass, established most prominently by 2 Live Crew. There will undoubtedly be asses shaking across the stage, throughout the crowd, and into the polo field when JT and Yung Miami go on to get things turnt up. No need to check your watch when it’s time for the twerkulator. — Travis Holcombe

Hit up this set from electrifying UK punks IDLES for a gut punch of everything you’ve missed most about live shows: Battery-charged stage antics, rhythms you feel in your teeth, shout-along choruses with fellow fans, and fists pumped in defiant joy as an act of resistance. Anthems like “Danny Nedelko,” named for a Ukrainian immigrant, are true songs for the people, spiritual palliatives that will leave you recharged to keep fighting upon return to the real world. — Andrea Domanick

It’s strictly good vibes only on this blissful dancefloor conjured by legendary Australian sample gods The Avalanches. Smooth, swaying grooves and effervescent melodies make for a warm bath of sound in which to rechristen yourself for the weekend of dancing in crowds ahead. The duo’s workup of Queen’s “I Want to Break Free” was a particularly triumphant high point, triggering smiles and a moment of shared presence reminding us all that we made it, we’re here. — Andrea Domanick

After Tame Impala took a turn for pop, King Gizzard & The Lizard Wizard have taken up the mantle of the greatest (Aussie) psychedelic rock band in the world. They’re not just limited to psych rock, either. On “Infest the Rats' Nest,” the prolific King Gizz dove into thrash metal territory, and on 2021’s, “Butterly 3000,” they toyed with indie pop. With the band releasing its 20th(!) album in 12 years — and second this year alone — today, you never really know what you’re going to get, but guaranteed to be a face-melting good time. — Travis Holcombe

For the past 25 years, nobody has done disco better than the French. From Daft Punk, to Justice, to Polo & Pan, and now to L’Imperatrice, the French just know how to make disco sound good and prove over and over again that le “French Touch” is real.

The cool thing that sets L’Imperatrice apart is they’re a live band with something like six people onstage making indie pop-adjacent disco tunes that make you feel like all's right with the world (as you very well should when you’re lost in a disco groove). — Travis Holcombe

I’ve admittedly never gotten that into Turnstile’s music, but you don’t have to to be totally floored by this performance. Leave genre and preconceptions at the door and prepare to get conscripted as the band schools you with a deep understanding of why their live shows have earned a cult-like following. — Andrea Domanick

If Coachella has an unofficial house band, it’s Disclosure. I first saw the (then-unknown) brothers Lawrence at the (then-tiny) Gobi tent up against the Chili Peppers in 2013, and from the first track knew it would be the last time they’d be on a stage that small. Their subsequent rise has mirrored that of the festival’s, and having seen them every time since, I planned on catching them for just a song or two out of nostalgia on the way to dinner. We stayed the whole time. The first drops of “White Noise” hit like a clarion call to a lost tribe, assembling tens of thousands of fans to revel in the sunset, each other, a live brass band on stage, and why we loved them in the first place. — Andrea Domanick

Molchat Doma hails from the embattled Republic of Belarus, but serves as a welcome reminder that a country’s government doesn’t speak for its people, offering support of Ukraine in social media posts and calling their country’s fealty to Vladimir Putin a disgrace.

Nor does said government speak for its people’s music. Molchat Doma’s “Sudno (Boris Ryzhy)” became a huge viral hit in 2019, and I am dying to see how hard that song will go off when they start playing it in the desert. If you’re a fan of dark wave post punk, you will want to be there. — Travis Holcombe

Stromae, who stopped by MBE this week, delivered one of my top four favorite Coachella performances of all time in 2015. I’m not even a huge fan of Stromae’s music, if I’m being honest, and I’m not even totally sure what he’s singing about most of the time, but I’m telling you, Stromae excels at every facet of putting on a killer live performance. There’s a style and grace to his live setup that’s hard to pin down, and feels closer to a cool opera than something you’d normally see at a music festival. — Travis Holcombe

The thing to understand about dance icons Hot Chip is that they’re a band, and low key (high key) one of the best doing it live. Since breaking out in the early ‘00s, they’ve come to embody the “if ain’t broke, don’t fix it” ethos, releasing muscular album after muscular album exploring all facets of electronic sound. Not only does this translate to a tight, well-oiled machine on stage, but it’s hard to imagine a group of lads who have more fun doing it. Their Coachella set sees them serving up hit after hit, and leaning into live instrumentation more than ever (Alexis Taylor, as it turns out, can absolutely shred). With a cover of Beastie Boys’ “Sabotage” and a new psychedelic, Devo-esque track on the docket — plus the just-released single “Down” — expect big things in store from their forthcoming album “Freakout/Release.” — Andrea Domanick

I’m pretty sure the first night I discovered “Faraway Look,” I listened to it no less than 25 times. I was transfixed. So much power, so much soul that I can’t even imagine what it must be like to see her perform that song live, but I’ll be there in the front row, ready to absorb Yola’s thunderous voice with an arm primed for goosebumps. — Travis Holcombe

When it comes to these Swedish synth-punks, you’re either a crazed fan, or you think everything about them is juvenile and stupid — at least, that’s been my experience with the listener feedback on the most polarizing band that I play on my show.

I have been an unabashed fan since the first time I heard “Sports.” My one and only time seeing them live was at the Echo in 2019, where they made the floor bounce to such a degree that I actually felt a tinge of panic that we might all fall into the Echoplex in a pile of rubble and gleefully chaotic punk joy. True to form, their Sunday afternoon performance at Coachella was my favorite set of the weekend, across all stages. They debuted a new song (see above) and played with an intensity and swagger that got the mosh pits on both sides of me stirring on several occasions. — Travis Holcombe

I don’t need to tell you to go see Fatboy Slim at 8:30 p.m. in the Yuma. Obviously go do that. But I’d be remiss to not share the hack of heading there the set before to check out UK dance fixture Michael Bibi. Not only will you avoid the nightmarish line and scramble for Fatboy, but you’ll get a simmering, delicious set of Bibi’s tech house to writhe to while making eyes at strangers in the shadows, or cooling off with a drink in the tent’s clutch indoor bar. — Andrea Domanick