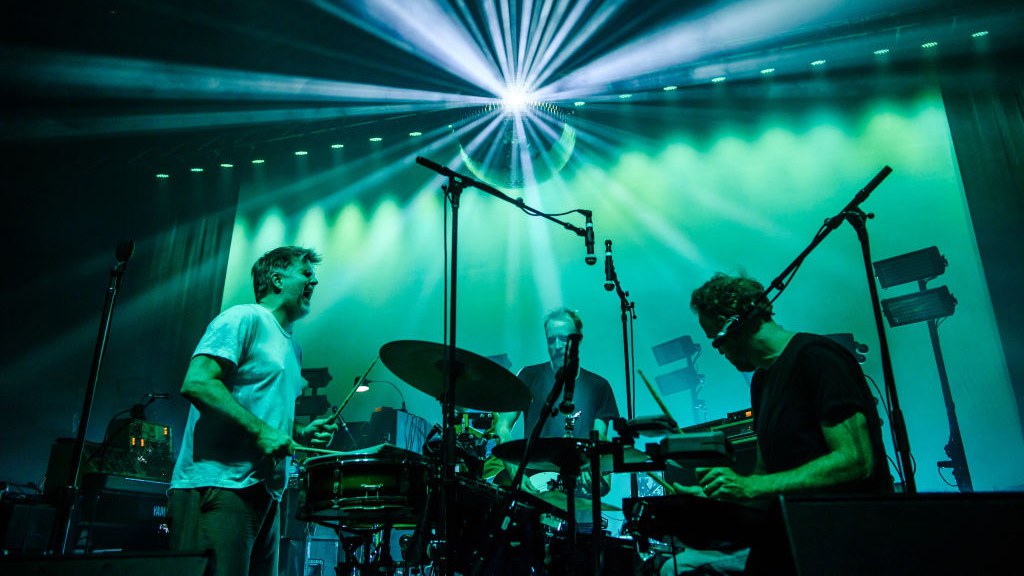 LCD Soundsystem livin’ it up. Photo by Stefan Hoederath/Redferns

This week’s selects come to you from the finely-tuned ears of our shiny new KCRW Music interns Kylee Wiens and Kai Wayans. We put them to task to share two introductory tracks apiece, and based on the picks alone, we can tell they’re gonna fit in just fine.

Kai brings us experimental jazz from Tortoise guitarist Jeff Parker and the latest from alt-country stalwart Lambchop, while Kylee serves up a sonic time machine with a late ‘70s lost R&B cut and a should-be-iconic slice of Chilean synthpop from 1990.

Rounding it out is a staff-selected dance floor reinjection of an electronic classic in honor of the recent first edition of early-aughts-scene-kid dream date festival, This Ain’t No Picnic.

This track’s your cue to sit up and listen — jazz is calling. Experimental and improvisational jazz artist Jeff Parker has been steadily impressing since the nineties, but this select, a favorite from his sublime 2020 album, Suite For Max Brown, is a perfect intro if you’re new to his undulating and intoxicating compositions. Mix a drink and strap in for a near-seven minute journey of building sounds, swirling notes, and inspiring living-room grooves.

Lambchop is just one of those bands: You’re either obsessed, or you’ve never heard of them. Hailing from Nashville and prolific under the blurry header of alt-country, the shapeshifting band led by frontman and auteur Kurt Wagner has offered music spanning styles, structures, and attitudes for over three decades. Out just this month, this latest track is somber, yes, but the invitation into melancholy is one you’ll want to accept.

Baby’s in the eye of the beholder. This 1979 track from Donnie and Joe Emerson, two brothers who never got their due, has been enjoying its place in the sun granted by a whole new set of teen-dream fans since being re-released (on red heart-shaped vinyl) by Light in the Attic Records back in 2012. With cozily lo-fi production, lovelorn vocals, and a familiar, lilting structure, this track’s vintage-yet-timeless appeal sparked an upcoming biopic about the brothers and their singular release, named for the album Dreamin’ Wild. Swoon!

Chile’s Los Prisioneros left a crater in the face of Latin pop music upon their arrival in the mid-’80s, and elements of their sound and style remain trackable across contemporary music. Listen for yourself to ID the foundational synthpop elements that carry this passionate hip-swinger, and you’ll swear you know it from the credits of a John Hughes film. Demonstrably pop-forward while maintaining an air of curious menace, this jam demands you to keep questioning the status quo.

Fans of mid-aughts heroes LCD Soundsystem perked up at some fresh activity recently — the band laid down new music for the first time in a long time, to be featured in Noah Baumbach’s upcoming adaptation of Don DeLillo’s “White Noise.” More immediately, LA LCD-heads are bathing in the afterglow of the band’s Saturday night headlining set at This Ain’t No Picnic. We’re accordingly offering this track to keep the party going: a favorite dance-forward remix of an early LCD hit and our nod to Despacio, the festival’s weekend long dance tent where frontman James Murphy’s DJ sets repeatedly threw down.