The soaring experimental gospel of LA’s Gabriels has a perfectly LA origin story — they met at a casting call. Band members Ryan Hope and Ari Balouzian were working together on one in a series of film collaborations they’d been a part of when singer Jacob Lusk walked through the door. No word on whether Lusk landed the audition, but that fateful session would birth some magic.

Though the three core members of Gabriels didn’t know where the project would lead, their varied backgrounds in film composition and classical performance has yielded two EPs worth of jaw-dropping musical craft, incisive lyrics, and a live show that will leave you breathless.

Speaking of which, on the heels of their standout “Bloodline” EP, the trio stopped by Anne’s backyard with a six-piece band in tow, and you couldn’t ask for a better match between band and backdrop. At one point, Lusk had to re-start a song after getting momentarily lost in the majesty of the Capitol Records building behind him. Grab your boo or your best solo dance shoes and get ready to swoon.

Expect to see much more of Gabriels throughout 2022 and beyond. They were selected as KCRW’s Breakthrough Artist (2021), with a landslide of support from KCRW DJs across the board. We’ve also made believers out of our pals at NPR as they asked us to write about the trio for their Slingshot’s 2022 Artists to Watch. 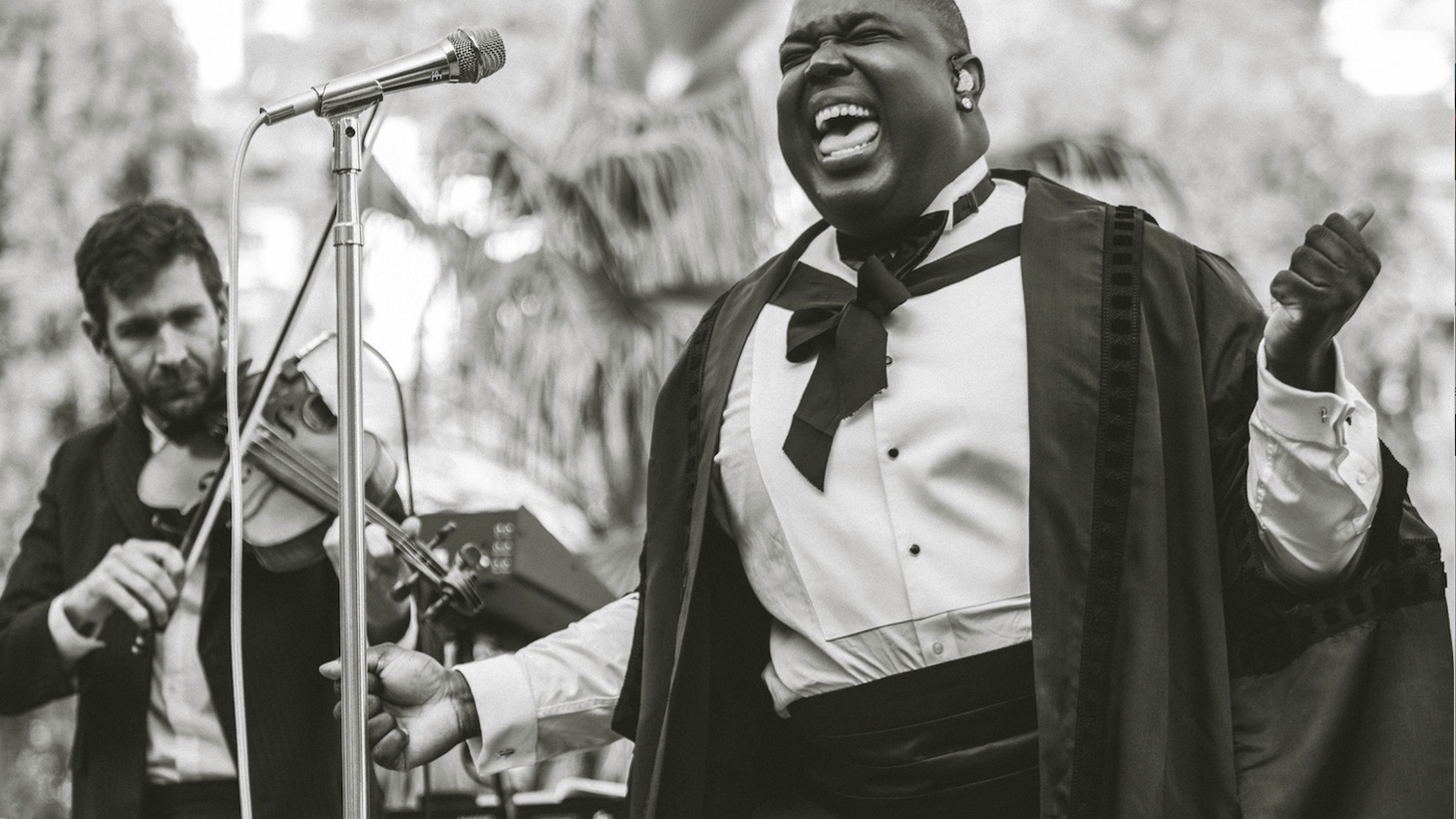 KCRW: You were a band for four years before you released anything. Why is that?

Ryan Hope: That's the thing, we weren't a band until somebody kind of made us one when we released the music, really. That was the weird thing — it kind of happened. And then everything came after releasing the music or getting the songs together. We made this song called “Loyalty,” and we made that for film — we were born out of making music for film.

Jacob, tell us about the string of jobs you had before and leading up to the beginning of Gabriels.

Jacob Lusk: I had about 10 or 11 jobs, man. I was working as a choir director. I was teaching the children. I worked for a running sunglasses brand, Goodr. I was still doing gigs at the time. I was doing anything that would give me a check. I love God, so I enjoyed it as well, but yeah, I definitely was doing a whole lot. And you were going to go into opera at one point, right?

Lusk: For about six months, yeah. I took a voice class, and I had done chamber music in high school and stuff. And then I had a vocal teacher. Her name was Miss Sweeney. I was at West LA College. She was like “You were born to sing!” So I started doing the classical stuff she did. She gave me one-on-one coaching. I had another coach, there's a school called the Curtis Institute in Philly, which is scholarship only. So I was just like, “Oh f-it, I'm gonna go down that path. That's great. I'm gonna make good money. I'm having a degree and I'm gonna sing. What's better than that?”

And then I met Nate Dogg and he took me to the street. [Laughs] He didn't take me to the street, but I met Nate Dogg and I started working with him. I actually dropped out of college, not because of him, but it was the first time I met someone who was actively working in the industry. He wrote a lot of records for other artists, so now I'm writing with him, I'm recording with him, and so I was like, “Oh, this can really be a full time thing,” and that was kind of the transition out of it, to be honest.

What was the idea behind naming the new EP “Bloodline?”

Lusk: The bloodlines thing is this concept of [how] a lot of times, where we come from and things that have happened in our past can hinder us for the rest of our lives. Because you're from a certain place, you can't do this. Because your mom or dad did this, you have to do this. Or even like alcoholism, gambling, there's all these things that [seem] cursed.

On “Bloodline,” the last line is “don't let it destroy you.” Like, you don't have to go down that path. You can be better than your situation, you can be better than your circumstances. You're not the things that you've done in your past, or things I've done in my past — and I done done some stuff, we all done did some stuff — it doesn't control or mandate what happens with the rest of my life. And that's where “Bloodline” came from.

Even just seeing our parents and what they went through, it really should be a motivation, and it is for all of us. Our parents worked their fingers to the bone so that we could have better opportunities and better things. And everyone doesn't come from that circumstance. But no matter the circumstance, you definitely can be better and greater.

Did you grow up listening to church music?

Lusk: Yes. I wasn't allowed to listen to secular music, really. So it was nothing but gospel. I didn't even know Motown stuff, really. So it was gospel and jazz. I could listen to jazz, because that's safe. And I'm kind of glad for how I was brought up. A lot of people hate being brought up in these really restrictive environments, but for me, it kind of taught me that it was okay to be different and I didn't have to go with the crowd. Brazilian singer-songwriter Rogê shares the latest preview from his forthcoming album Curyman, which is being called “a modern Brazilian masterpiece.”