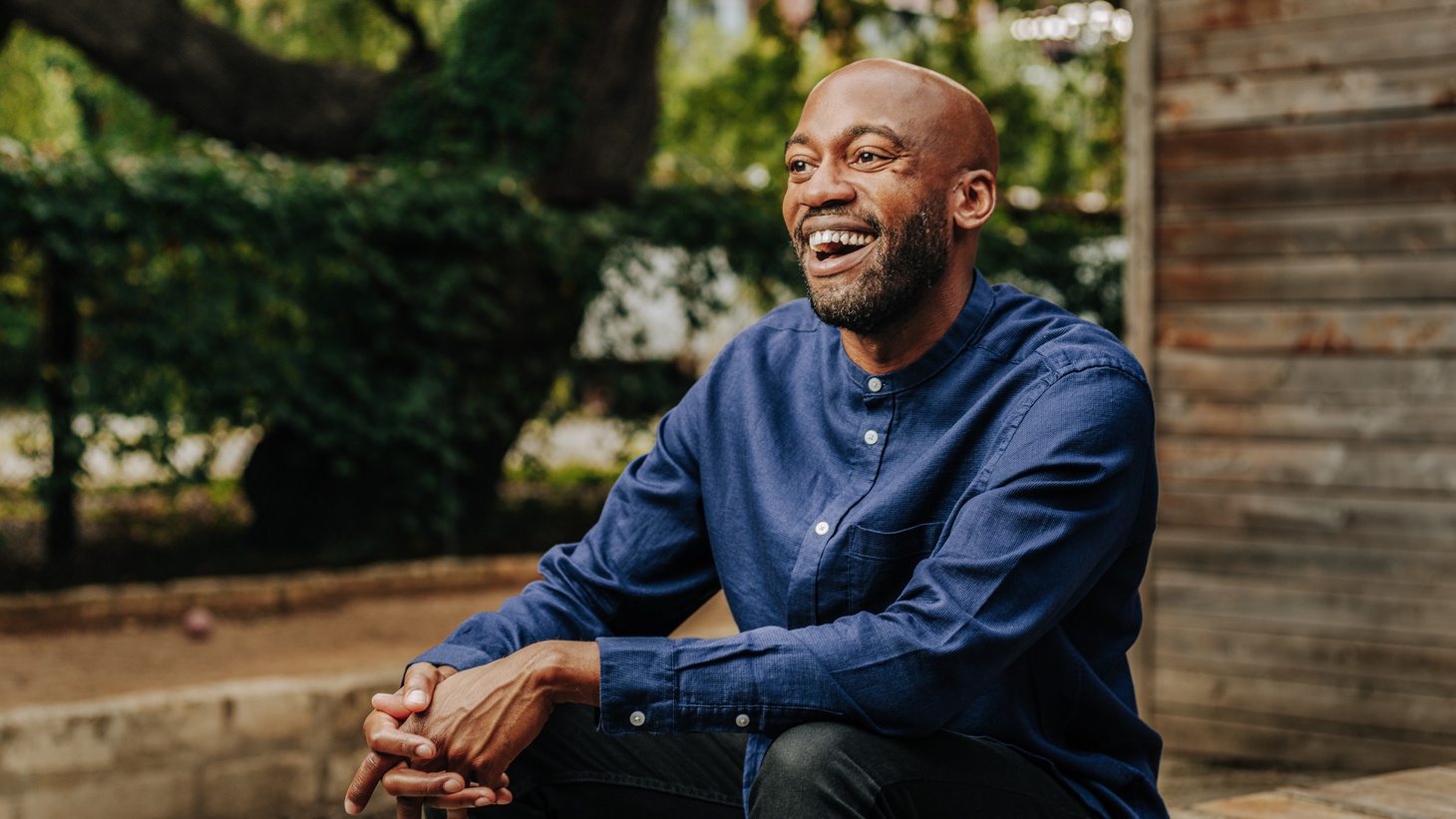 If you’re a fan of NPR, then you probably already love Sam Sanders. Perhaps he kept you (somewhat) sane through his coverage of the 2016 election cycle. Maybe he’s always been one of your favorite guests on Pop Culture Happy Hour. It’s very plausible that you’ve been shouting out answers during the “Who Said That?” segment of his show It’s Been a Minute ever since it debuted in 2017.

Our intrepid Morning Becomes Eclectic hosts Novena Carmel and Anthony Valadez ventured over to Sam’s neck of the woods recently to talk about Summer Songs, and the best music of 2021 (so far). Now it’s our turn to put Sam in the hot seat. Sanders, whose show now airs on KCRW at 10 a.m. Saturdays, stops by the show to reveal his rocker side, lay out some serious strategy for cuffing season, and provide some of the best insight you’ll ever hear as to why so many musicians tend to be *ahem* challenging to interview.

KCRW: For folks who don't know, tell us what “It's Been A Minute” is all about.

Sam Sanders: “‘It's Been A Minute’ is a news and culture show that is consistently trying to blur the lines between hard news and soft news. So we talk about a little bit of everything every week. And we give you an assortment of stories from the week of news. And then also some good deep meaty, long form interviews with creatives and musicians and writers and directors and actors. It’s a twice a week podcast, and it's also heard on a few 100 public radio stations every weekend. And on any given week, you can hear a newsy chat about the pandemic, politics or the infrastructure bill… But also a deep and rich conversation with creatives like Michaela Cole, it's a nice mix.”

We know you're a big music fan, so we're going to ask for some song picks that refer to certain things. To start, what is a song that best symbolizes a side of you that no one ever gets to see?

“You know, I talk a lot about R&B and hip-hop when I do interviews on the show. That's my sweet spot. I am a child who was raised on ‘90s R&B and that's kind of where I usually live. But another side of Sam is really loving intense hard rock music that makes me run faster. I run a lot and [for] my playlist when I run, I just want angry, driving, pulsating music. And one of my favorite angry, driving, pulsating rock songs is ‘My God Is The Sun’ from Queens of the Stone Age.

And then the song gets like two and a half minutes through, and you think it's about to close… And it just becomes another faster song for like a minute. It just doesn't quit. This is one of those songs that I like to start to play for the last mile of the run. And I'll always get a personal best. That is the part of me that just wants to be loud and angry, beating that pavement. Without fail, every time Queens of the Stone Age does it for me.”

We know you love literature, and you [just] mentioned lyrics. Is there a song that you wish you wrote?

“Probably my favorite album of the year so far is the latest Jazmine Sullivan’s release, ‘Heaux Tales.’ I love the way that her songwriting is so conversational. For me, the most powerful song on the album is her ballad, ‘Lost One.’ It's just a beautiful, rich, and soulful ballad, and her voice is haunting and powerful. But [some parts] of the verses feel like she's talking, singing, crying, and smoking a cigarette all at the same time. And she's giving you these lyrics, like she's just talking to her friend at the bar about a horrible relationship.

The first verse is: ‘You know, when you lost one, you lost a good one / You know, when you lost, you go out and screw different people to cope and ignore all precautions, and you drink and you drink and get faded.’ She's delivering these words, they aren't really stanzas. They aren't really lines. It's not even stream-of-consciousness. ... I just think it's powerful. And she also does this thing where she writes these songs that only she could sing. When I hear Jazmine Sullivan sing ‘Lost One,’ I don't ever want to hear anybody else sing it. It's hers. It's just hers.”

When we were on your show, we talked about summer anthems. And now the weather is changing. What the kids call “cuffing season” is upon us, when you cuddle up with someone you like. What do you think is a great song for cuffing season?

“‘Cuffing season,’ I think, is actually too broad. There is the laying the groundwork for the cuff itself, and then there is the cuffing. So I think the start of the cuffing actually begins in the summer. You got to find your cuffing buddy in the summer, to then start cuffing in the fall/winter. It's got to be a slow burn. You can't just start like that. So if I had to pick a cuffing season song that straddles that fence between summer and fall, it’s a song by perhaps one of my favorite artists of the last decade, Jai Paul. The song is called ‘All Night.’ It is just one of the most seductive and sensual songs I have heard in years. It's so lush. It just oozes sensuality.

The lyrics are all about wanting to make this one night with this girl that he loves last forever. And he sings in the song, ‘Girl, if it's got to be one night, then it's got to be all night / Let's meet up in the moonlight.’ That's how you start cuffing. That's how you lay it down. Who says no to that? You got me for the rest of the year.

Also, the story of Jai Paul is quite interesting. He was about to be an artist on the rise. I want to say around 2012/2013 he had some singles that were quite buzzy. He had been sampled by Beyonce and Drake. Everyone was waiting for the Jai Paul album which was gonna be this awesome hybrid of R&B with South Asian sounds. Then, before he puts the album out someone leaked the whole thing before it was done. Before it was mixed and finalized. Then the leak was scrubbed from the internet very quickly, Jai Paul just kind of disappeared for a while. And then years later the whole album was released, but it was still those rough mixes. In spite of those being the rough mixes that album is still just one of my favorites. It's so good. His musicality, the way he blends genres — it’s like he's channeling D'Angelo and Prince, and Bollywood. It's just phenomenal. So besides thinking that ‘All Night’ is a perfect song for cuffing season, the album itself is one that everyone should listen to top to bottom. The whole thing.”

“I watched the whole thing, and I was in several group chats about the show.”

Oh yes, we saw your tweets. So there's the dad in the show that kind of stands out to us for some questionable advice he gives to his son... What is some great advice that you've been given?

“It's a lot of different phrases of advice that ultimately become the same bit of advice. Which is this: Most things worth having take longer than you think they should to get them. Patience. I think the advice is patience. Everything you want will take longer than you think it should. And you should always be hustling, always want it, and always be hungry for it. But know that it might take some time. And you’ve got to moderate your ambition with patience. I think that is the best advice that I've received. ... [It comes] in different ways from people and from life. You got to just slow down.”

Without naming names, can you think of a time that you were excited to talk with a guest, but the connection just wasn't there?

“A lot of times, it's hard for musicians to really talk about their music. Y'all know [that] for a lot of musicians, their first language isn't the spoken word, their first language is music. They're most fluent in playing music. Singing, writing music, and songs. When you ask them to talk about it in an interview format, sometimes that's just not their preferred space. So I'm not surprised, I'm used to it now. But a lot of times [there’s] a musician that you might love, and their music speaks to your soul. But when you ask them to get on a mic and talk about it at length, it's hard. I get it. I used to get mad about it, but it is what it is. You keep making good music. It’s fine.”

“I would love for people to listen to the way that we talk about all different kinds of news events and popular culture, and understand that it’s all connected. Politics is not divorced from popular culture. The economy is not divorced from art. All of these things make the world together. I came up in a traditional newsroom background where there were sections. … This reporter covers sports. And that reporter covers politics, and that reporter covers business, and you cover the arts. I realized more and more that all that stuff is connected. And we need to be able to have conversations, especially as journalists that connect those dots. What I hope to do on the best weeks of the show is ask questions, and have conversations that make us want to connect the dots more between things that we don't think have a connection.”

Tune into “It's Been a Minute” with Sam Sanders, now airing on KCRW on Saturdays at 10 a.m.