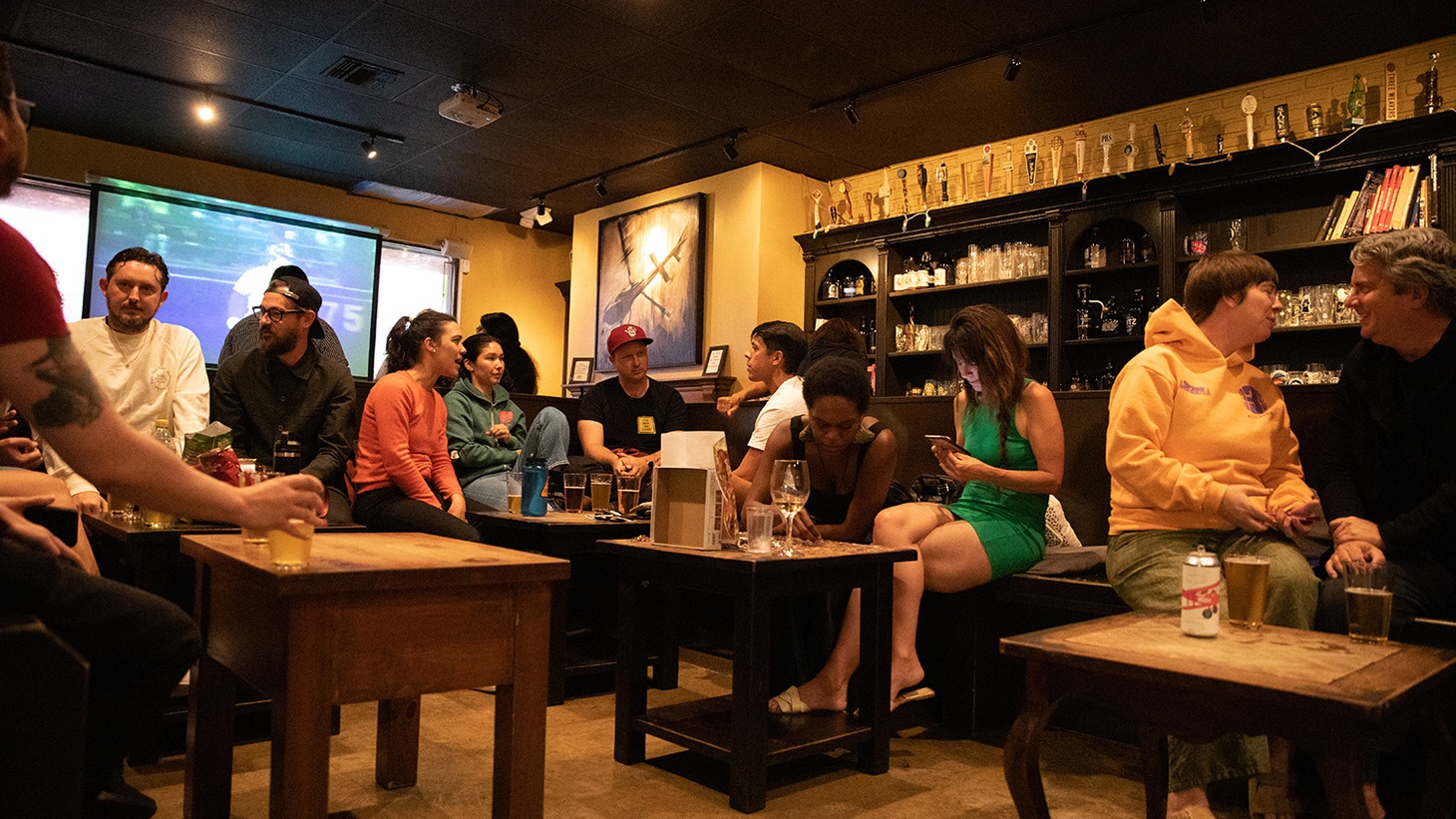 “Los Angeles is a monster of a city. … But this place is an oasis in the middle of it all. It almost feels like you're on the set of ‘Cheers’ or something,” says Sunset Beer’s regular customer Bret Allegra. Photo by Zaydee Sanchez for KCRW.

When Sunset Beer Company opened in Echo Park in 2010, the managers were well aware that long-time residents saw them as gentrifiers.

“Everyone was like, ‘Uh oh, there goes Echo Park. Here come the hipsters,’” recalls Bennett Erickson, the current manager.

Instead of ushering in the end of the neighborhood, the craft brew shop and taproom became a beloved institution. But this kind of loyalty does not protect businesses from the forces of change in LA. Sunset Beer is closing permanently on May 1.

“That alone means certain businesses can never open here,” says Nugent. “We were lucky to open when we could, but we can't afford it anymore.”

The types of businesses in Echo Park are changing with the demographics of the people they serve. Annual incomes over $100,000 have doubled in the area over the last 10 years, according to the American Community Survey. The neighborhood is majority Latino, but the population of people the Census calls “non-Hispanic white” is up from 12.9% in the year 2000 to 30.25% in 2020. 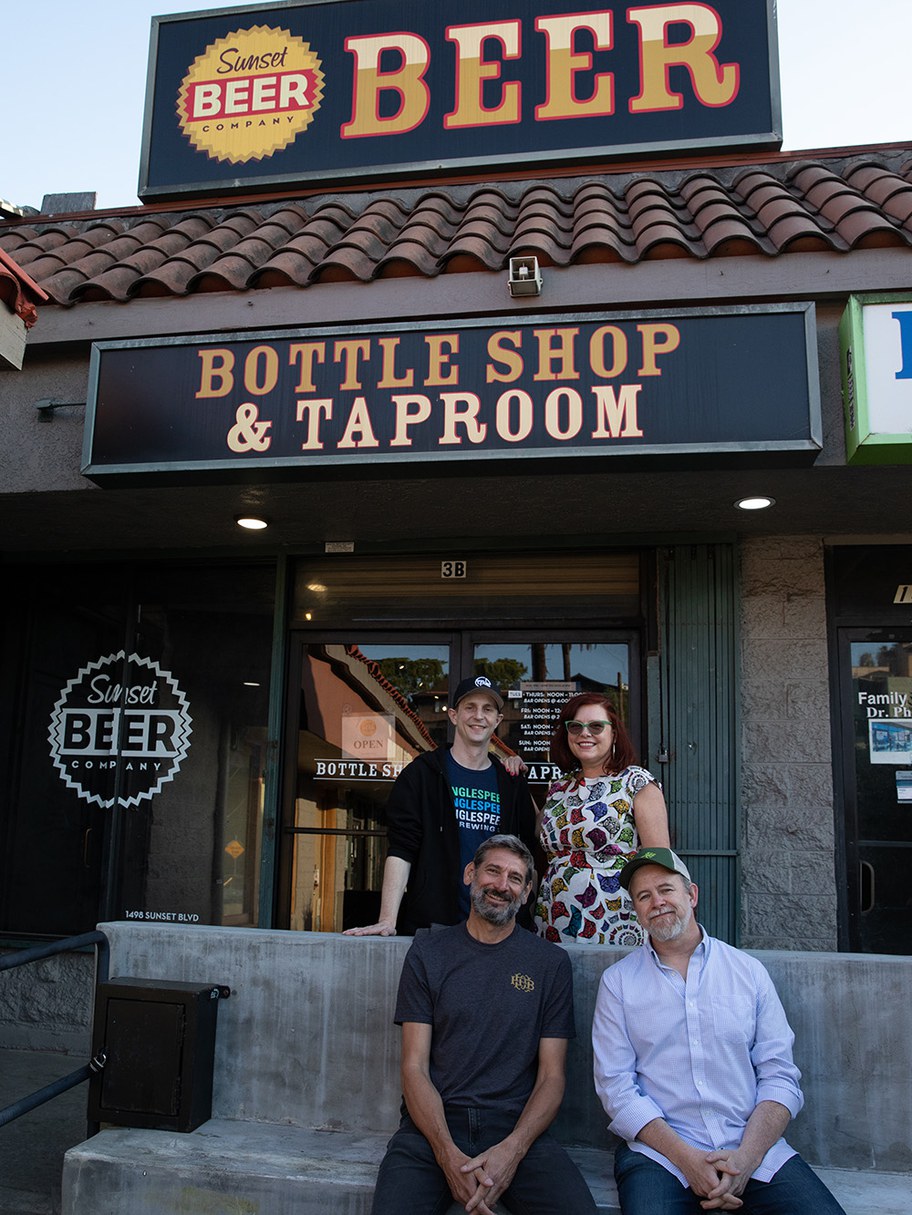 Sunset Beer manager Bennett Erickson and co-owners Jenna Miller-Von Ah, Drew Von Ah and John Nugent (clockwise from left) gathered for one last night together at the business they built together. Photo by Zaydee Sanchez for KCRW.

What Sunset Beer is experiencing is part of a typical narrative of neighborhood change, says Rudy Espionza, the executive director of Inclusive Action, an East LA non-profit that works to prevent small business displacement.

“Small businesses are the first to be displaced in a community that's changing because there aren’t any tools to help them defend themselves resulting in protections for them.”

The state of California does not allow for commercial rent control, so it is legal for property owners to raise rents as high as they think the market can handle. Rates continue to trend upward in Echo Park as the area attracts more and more investors.

Espinoza says the conversation around commercial development is too narrow with a focus primarily on profit. He would like the definition of what is valuable expanded.

“It's not only about the money that one makes from a deal,” he says. “It's also about the other things … other contributions a business or an investment makes to a community.” 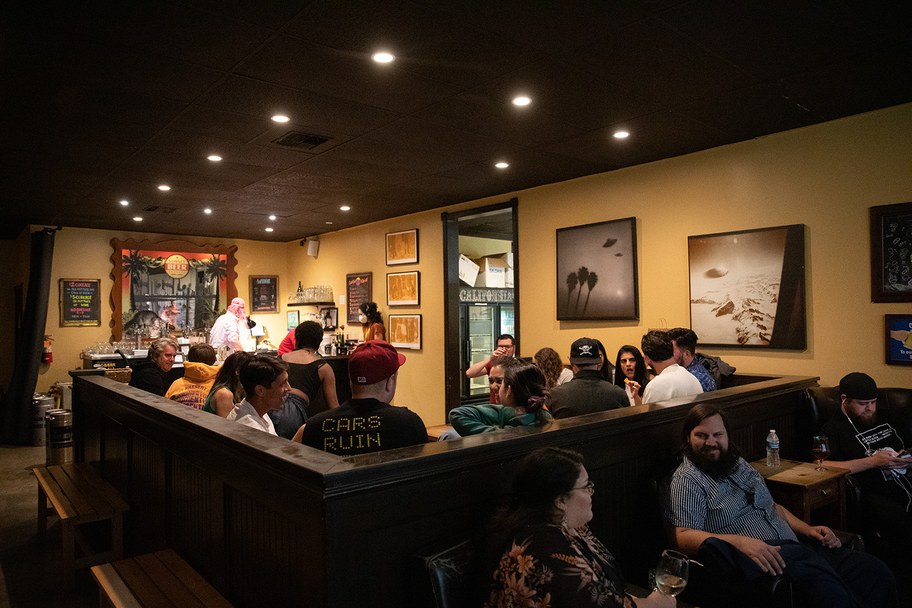 Customers gather in the taproom of Sunset Beer, designed to feel like a living room where you can relax and chat with friends. Photo by Zaydee Sanchez for KCRW.

“I think it's just even harder than we made it through two years of a pandemic with the support of this community and all of our employees who are just rock stars through it all.”

For regular customers like Bret Allegra, it has always been more than just a place where you could buy a beer for $3.

“Los Angeles is a monster of a city. It's crazy. There's angry traffic. But this place is an oasis in the middle of it all,” says Allegra. “It almost feels like you're on the set of Cheers or something.” 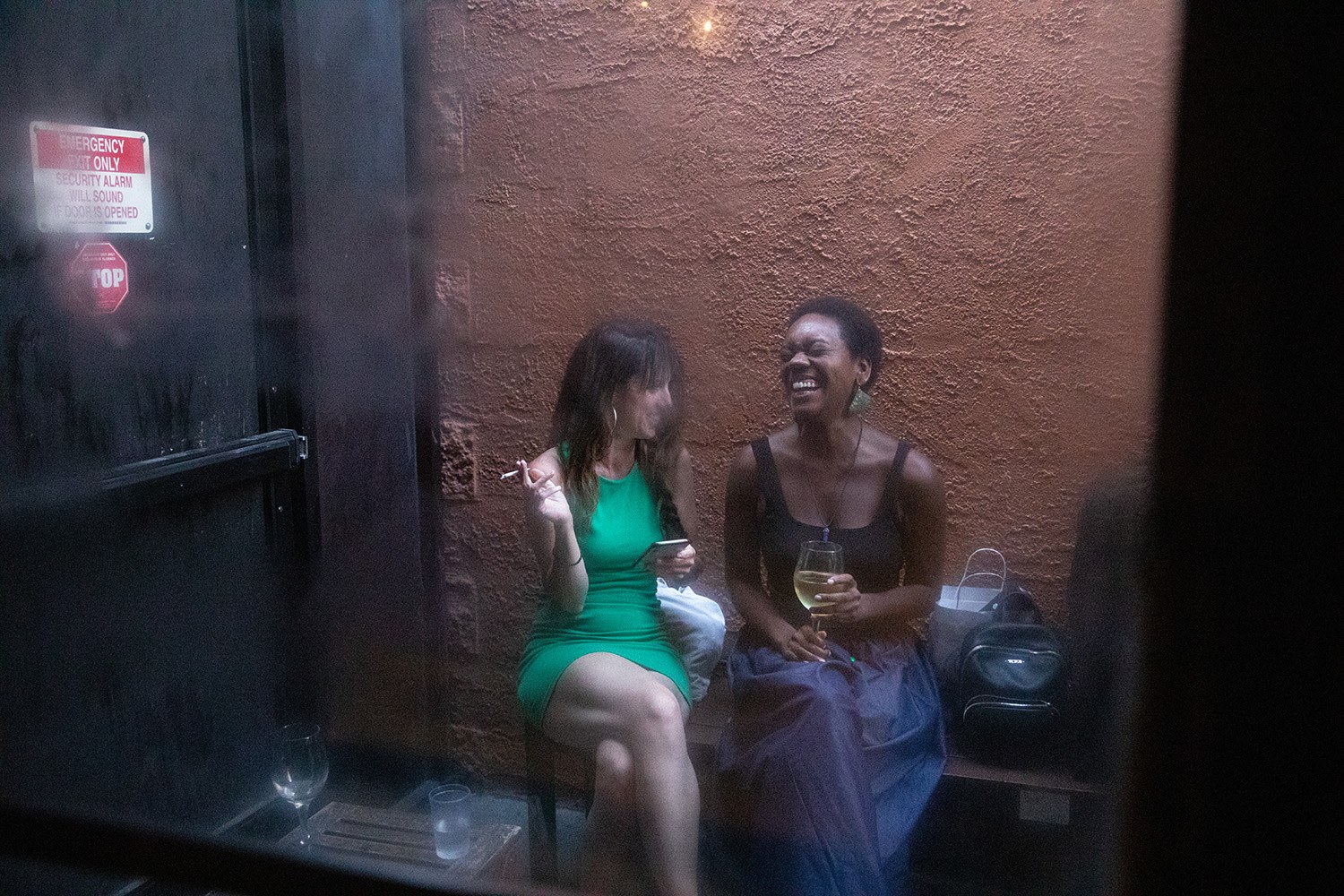 Kate Watson-Wallace (left) and Jessica Emmanuel sit on the patio at Sunset Beer where they are regular customers. After 10 years of business in Echo Park, the bar is closing permanently on May 1. Photo by Zayee Sanchez for KCRW.

That homey feel, where everyone knows your name, was what the owners were going for. They credit “not hiring jerks” and creating a lived-in atmosphere inspired by used-record shops. To make things comfy, they bought a used sectional couch that’s in the middle of the tap room.

“We designed it to just sort of feel like a living room, where you're sitting by the fireplace with your bookshelf, and you can hang out and just talk with friends,” says Drew Von Ah. He knew they were on their way to creating something special when they started to find napkins with quirky drawings and friendly notes stuffed in the drawer of a taproom table. The customers were making themselves at home.

“It just was this idea — this feeling that the community was kind of drawn to the space and taking it [and] making it their own,” says Von Ah.

The community that was taking over the space changed from the stereotypical craft beer fan, which is “pretty white-guy oriented,” says Erickson to “totally reflecting what you see in this neighborhood.” 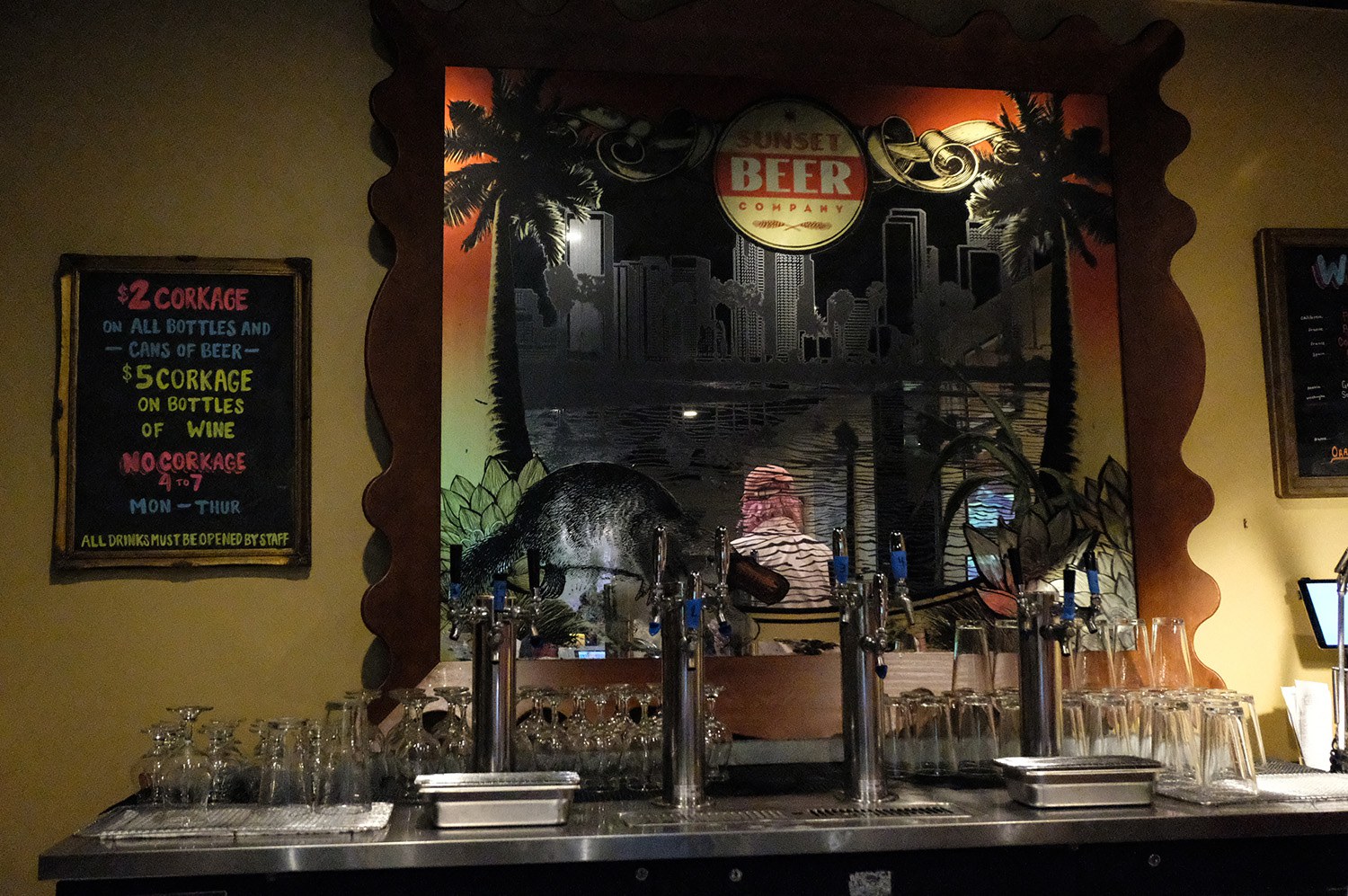 This is one of the things regular customers Jessica Emmanuel likes about Sunset Beer.

“There's all types of people that walk in through here. And I don't know of a place that has as much diversity of characters or personality types as this place,” says Emmanuel. “I just don't know of any that feel as warm and easy.”

Sunset Beer’s closure is especially sad for Astrid Duda. She met her husband here on a first date nine years ago, and when they got married in March 2022, they brought their wedding party to Sunset Beer for drinks.

“I think we were all in awe to find this place,” says Duda. “And we obviously appreciated it, but like now that it's not gonna be here, we're like, ‘Where do we go? What do we do? Do we hang out at home?’” 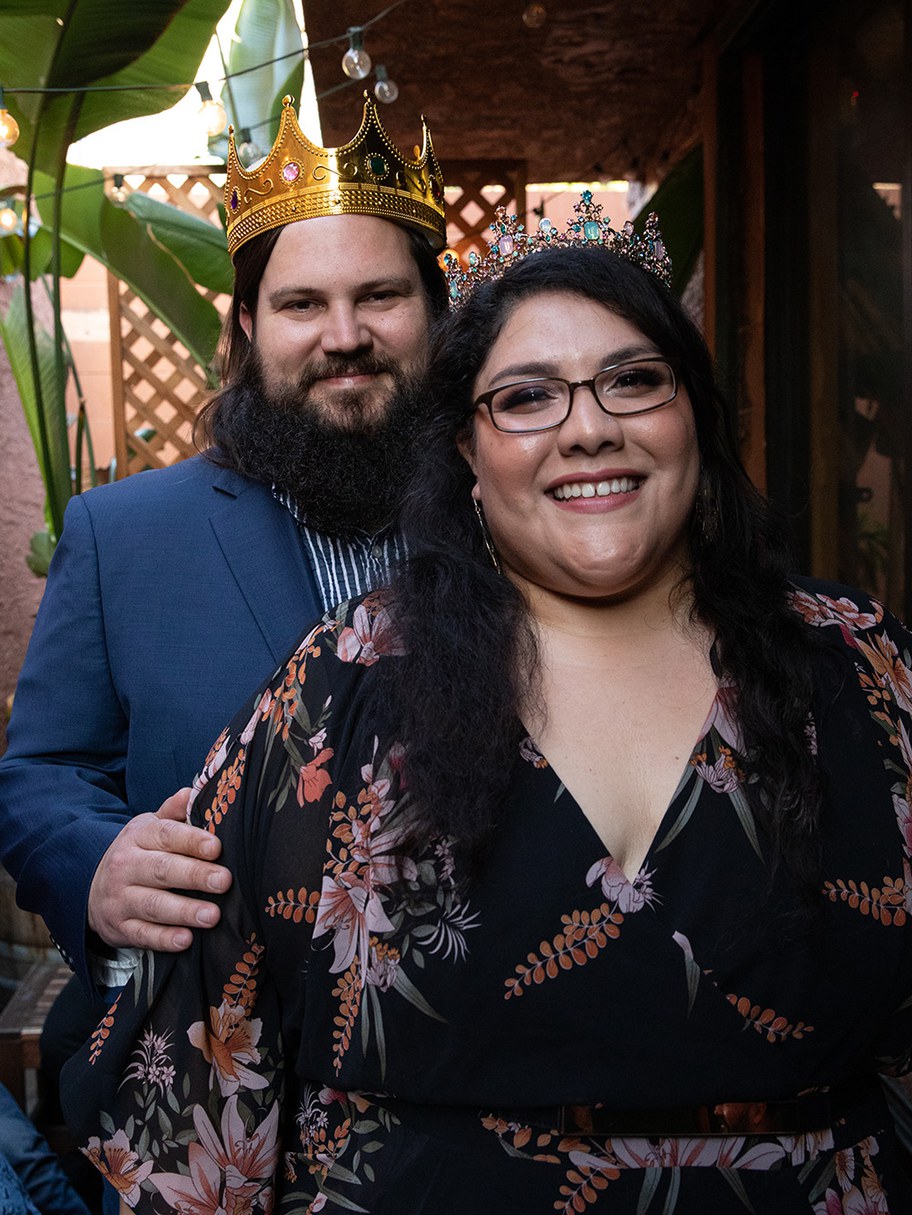 Matt Duda and Astrid Duda wear king and queen crowns at Sunset Beer as part of the party they threw at the bar. Photo by Zaydee Sanchez for KCRW.

In order to have one more night out at their favorite spot before it closes, the Dudas recently invited their friends to throw a prom together at Sunset Beer. They got dressed up, brought balloons in shades of pink and gold, and wore king and queen crowns. It was a celebration of the relationships they built at Sunset Beer.

“We've seen people grow up, fall in love, get married, get divorced,” said Duda. “I think everyone has your back here.”

The Mexican restaurant El Nayarit thrived for almost 50 years. “Waitstaff … had all been outsiders that became insiders, and they wanted to share that spirit with you,” says...

Sunset Beer Company is closing on May 1, but it leaves behind a legacy of building community and belonging for Echo Park’s newcomers.

Goofy foot or not, young skaters flock to Marriage shop in Echo Park

Marriage skateshop quickly became a hangout spot for many young skaters after it launched earlier this month. Owner Ronnie Campone has been skating for 30 years.