A ride on the Expo Line has become a fist-clenching affair: commuters’ faces and knuckles turn white at the prospect of running into their fellow rider when the train abruptly stops.

LA Metro had cut more than 5% of train spending for this fiscal year, and it started cutting service on the Expo Line in June. That’s been having a huge effect on how thousands of Angelenos travel between Downtown LA and Santa Monica.

“When I took the Expo Line before, I almost always had a place to sit,” says UCLA student Nina Long. 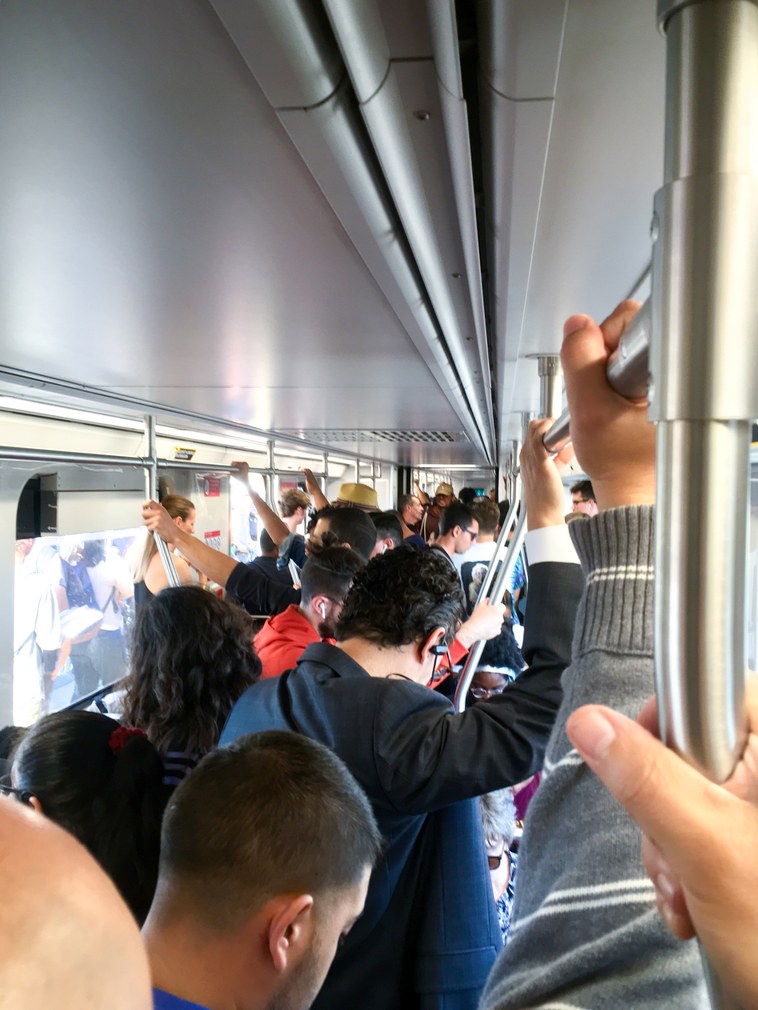 Commuters on the platform can’t enter the train because the vehicle is too crowded. Photo by Danielle Chiriguayo/KCRW.

Long commutes a couple of times a week, and she’s gotten used to seeing the overcrowding. “Sometimes folks get on, and they can just barely fit on the train. Like their backpack is hanging out the door and the door won’t close,“ Long says.

You can see more complaints on Twitter about “wall to wall bodies” and a “sweaty mess” on the trains.

@metrolosangeles Rush hour on the Expo line in AM and PM is insane. It’s wall to wall bodies and is feeling unsafe. Not sure if I can ride with my son anymore. Is something being done?

I ride the Expo Line 6x a week, 2x a day on average and it always brings me joy... the 25% service cut has zapped that joy and made something I used to love into an overcrowded, slow, sweaty mess @metrolosangeles plz fix this!!!!!

Another regular rider, 19-year-old John David Morgan, relies on the train nearly every morning on his way to class at Santa Monica College. To get to and from the Metro stations a bit faster, he uses his bike. But that can make commuting harder.

“When I try to get onto the train to put my bike in, I don’t want to block a door or cause any inconvenience, so I usually have to wait for a few trains,” Morgan says. “But there’s a disparity between most of the trains. One train will be really full, and another train will almost be like no one [is] on it.”

An upshot to crowds

Annually, the Expo Line sees about 1.5 million boardings, and it is considered the most successful of Metro’s rail lines. Packed trains are part of that success, right?

“Crowding is good, but only if you respond to it by providing more service because that means more people will travel, more people will benefit from whatever the trip is making possible in their lives,” says Jim Moore, who directs USC’s Transportation Engineering Program.

There’s even talk of prioritizing the Expo Line at stop lights. The train noticeably slows down at intersections near USC and Downtown LA. To help fix that, LA City Council members will vote Wednesday on whether to give the train priority over cars at these intersections, allowing the train to whiz past traffic.
What about buses?

LA Metro, like other transit agencies around the country, has seen a decrease in ridership over the last 10 years.

To fix that, Moore suggests focusing on bus riders, who make up the  backbone of the system. Add more buses, integrate bus and train trips, and when a train gets popular, don’t mess with success.

Can you be enticed out of your car for public transit?

A ride on the Expo Line has become a fist-clenching affair: commuters’ faces and knuckles turn white at the prospect of running into their fellow rider when the train...

Can mass transit be as appealing as cars?

We look at how our transportation system functions -- what works, what doesn’t, and what could improve it. One big issue that plagues public transit is travel time.