View of the City of Avalon on Catalina Island, from the century-old bell tower that chimes every 15 minutes. Many residents hold more than one job to keep up with the standard of living on the island. Photo by Caleigh Wells.

*This story was originally reported in February 2020, before the COVID-19 pandemic broke out.

Leticia Alvarez came to Catalina Island in May 1989. She moved from Mexico to work the busy summer.

Wages were low, but people could work a couple of jobs, get a lot of hours, and the housing was cheap. “You could find places. My first place was a little room for 300 bucks,” she says. 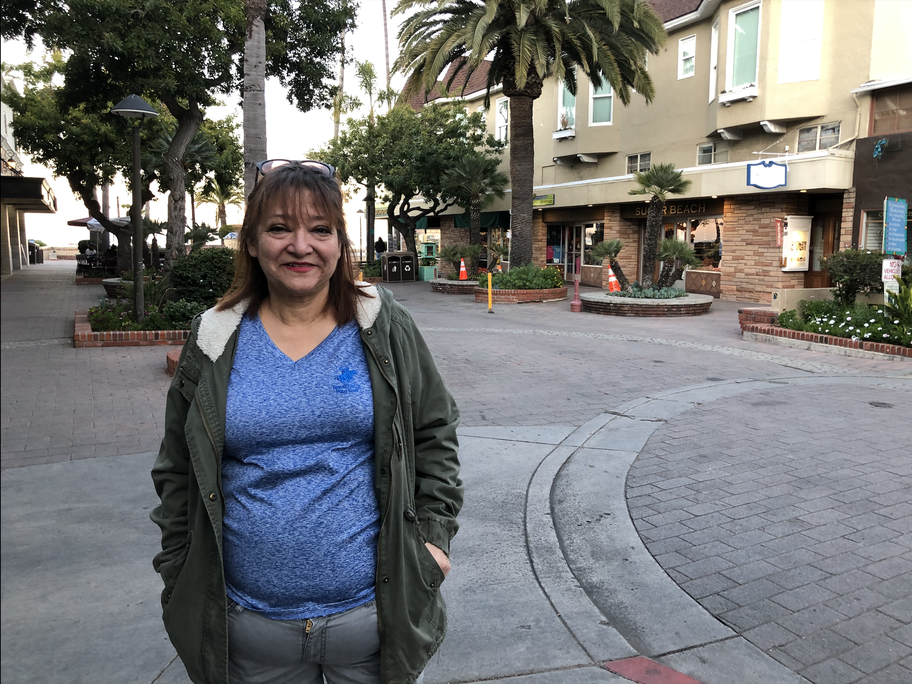 Leticia Alvarez has rented apartments for the 31 years she’s lived on the island. Photo by Caleigh Wells.

Then as the summer rush was dying down and Alvarez was getting ready to go home, she met a boy from Michigan.

“We started dating, and by the time I was going to go back to Mexico, he asked me to marry him,” she laughs.

So they never left. Three years later, they had a daughter. Then another one. “This is a great place to raise a kid. Pretty much you have 3,000 babysitters because everyone looks for your kid,” she says. 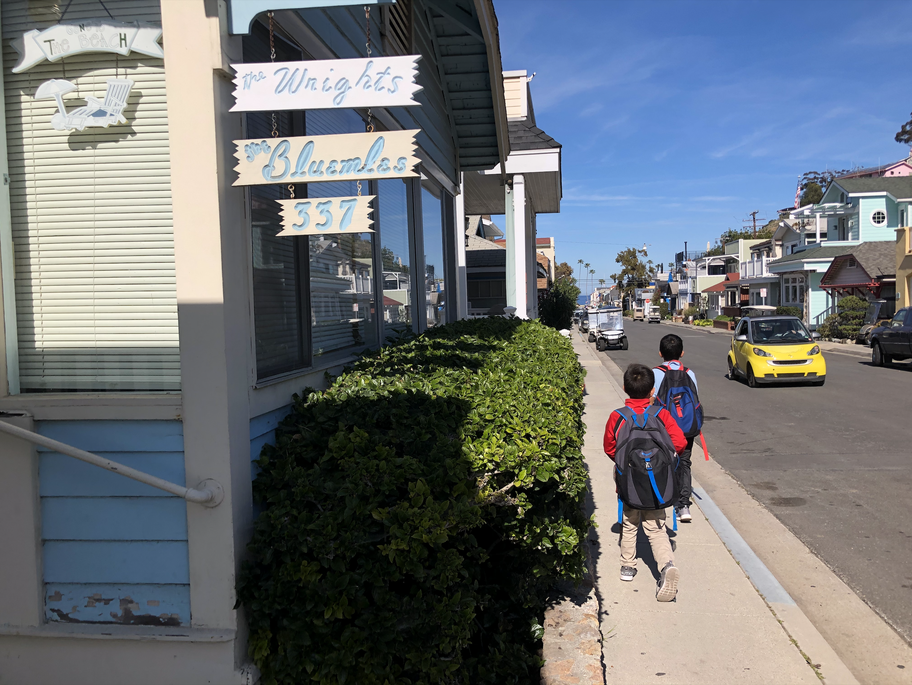 Two kids walk home from school alone. Residents say low crime is one of the perks of living here. Photo by Caleigh Wells.

Alvarez’s husband has since passed away and her daughters have moved overtown (that’s what islanders call the mainland). But 31 years later, Alvarez is still here.

She works hard to stay here, as do other Avalon residents. Many of them hold two or three jobs because the cost of living is really high.

Alvarez rented the same apartment for 27 years, and then when the landlord died and the building was sold, she was stuck.

“I literally started going street by street. I asked all my friends, all of them were looking for a place for me. We couldn’t find anything.”

She couldn’t find anything by word of mouth, so she put her name on a waitlist at one of the bigger apartment complexes. Five years went by. Nothing. The eviction notice was already posted on her door.

She was about to leave the island until, at the last minute, one landlord called her back. She then secured a two-bedroom townhouse for $2200/month in rent and utilities.

Like the rest of California, it was more affordable when the population was lower. In 1970, 1500 people called Avalon home, but now it’s over 4000, according to Mayor Anni Marshall.

A lot of buildings in town haven’t seen investment in decades. Renovation is expensive and demand is high, so tenants pay the kind of rent you expect in West LA. But some say they have leaky roofs, windows that don’t close, or heat that doesn’t turn on.

Meanwhile, a lot of landlords have figured out the real money is in vacation rentals. 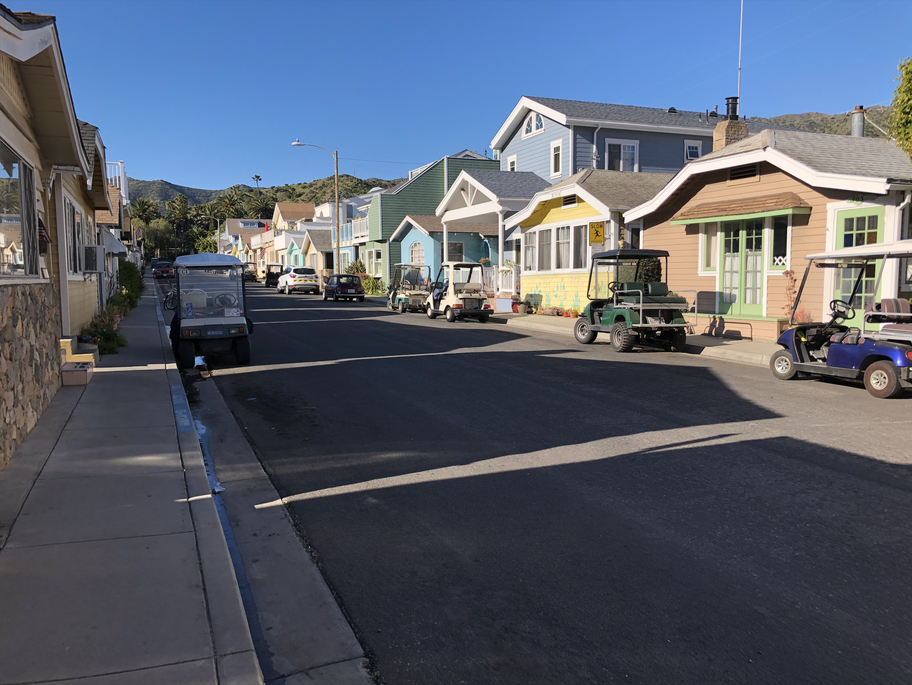 This part of town behind the shops is called “the flats.” Twenty years ago, it was mostly residents who lived here. Now it’s mostly vacation rentals. Photo by Caleigh Wells.

Mayor Anni Marshall points out houses as she drives through town on her golf cart. Having lived on Catalina Island since 1984, she knows almost every house, and three out of four homes she points at is a vacation rental.

Some islanders want to see more Airbnb restrictions, but others, including Marshall and the rest of the City Council, are hesitant. Fewer vacation rentals means less business for a town that lives on tourism. Don’t bite the visitors, the saying goes. They feed the locals.

Marshall says it might encourage even more landlords to use their property as a vacation rental, which would further the housing crisis for year-round renters. 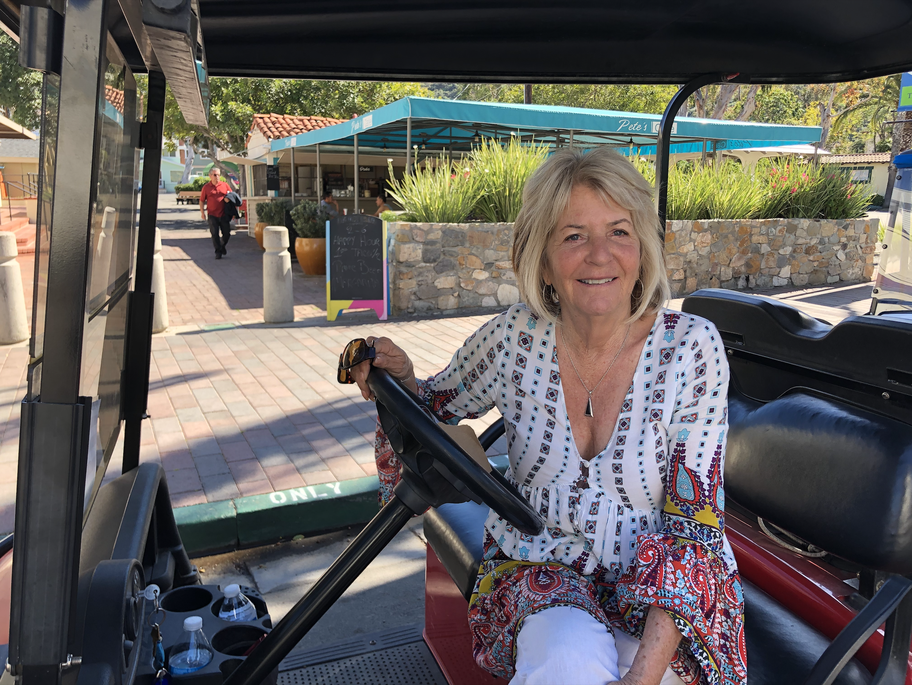 Anni Marshall drives a golf cart like most town residents.

She says rent control is out of the question too. “If we set rent control here, we’d be hung from the rafters I believe,” she laughs.

Why not build more housing? Since the 1970s, nearly 90% of the island has been protected from development by the Catalina Island Conservancy.

Even if you do find the property, there’s the water problem. It’s ironic for an island, but there’s limited fresh water access. Southern California Edison controls the water and is conservative in doling it out. Recent droughts have forced residents to ration water used for laundry and showers. More buildings means more residents — with the same amount of water stretched thinner.

Building more housing requires another waitlist. And the City of Avalon has to wait in line like everyone else, so affordable housing projects are delayed.

There’s no clear way out. And yet, residents make every effort not to leave the island.

That’s gotten harder, ever since Avalon’s tourism economy shut down in the wake of the COVID-19 pandemic.

Alvarez lost her job at the restaurant. The owner told her he isn’t reopening after the pandemic. “I was hoping to go back to work when everything goes back to normal, but now I have no idea what I’m going to do because I have no job,” says Alvarez.

For now, she’s receiving unemployment benefits, and that’s enough to pay rent and have a little money for food. But she said other residents in her position have had trouble filing for benefits.

Avalon Mayor Anni Marshall is pushing to reopen the island as soon as possible. “We are a tourist based economy 100%, so when you cut off your life blood, things start to die,” Marshall says.

The council decided the harbor will open on Friday, and starting on June 1, visitors can stay in vacation rentals and hotels again.

Even before COVID-19, securing a place to live in Avalon on Catalina Island was hard. There are no cars, next to no crime, and 360 degree ocean views. But the waitlist for...

Workplace design has shifted over the years to more open concepts that foster collaboration and interaction between workers, though the executive suite and coveted corner...