The owners of Highly Likely Cafe in the West Adams designed their bar to create an “international feel.” Photo by Jerome Campbell.

In LA, choosing where to buy coffee is about more than what that soy latte tastes like.

“I'll go to a spot where the coffee may not be that good, but the vibe is right.  ... I'll just continue going back there because I'm comfortable here,” says Michelle Johnson, a barista and coffee business consultant.

On her blog the “Chocolate Barista,” Johnson writes about how the design of a coffee shop signals who’s welcomed or excluded.

Those messages play out starkly in black neighborhoods in South LA that are fighting gentrification. We look at three new coffee shops. 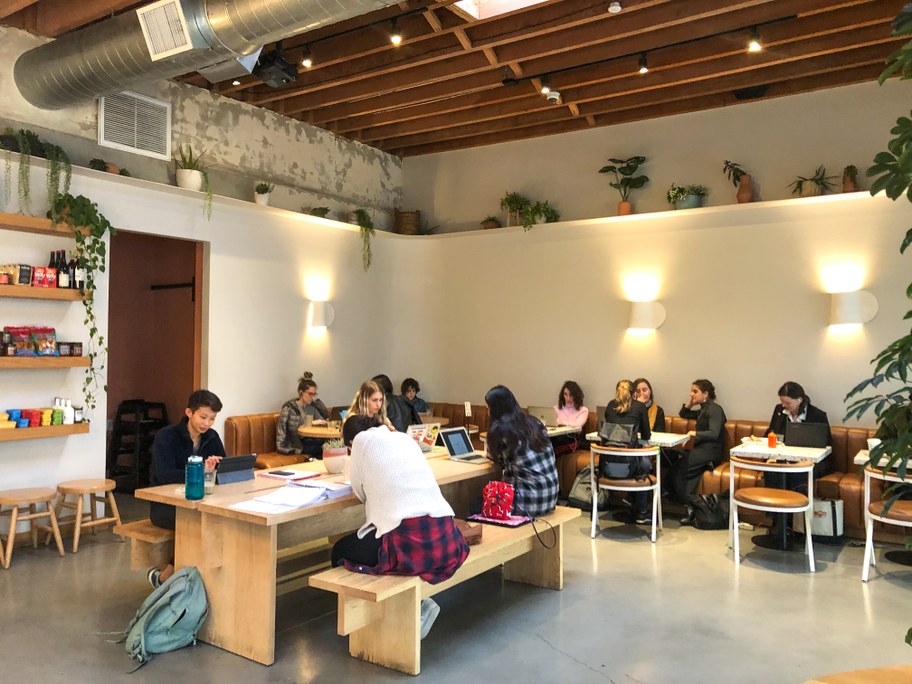 Almost everything in Highly Likely Cafe is custom made, including the terrazzo tables and pale wooden chairs tucked underneath.

A big green parrot is painted on the cafe’s white-coated brick facade outside. The shop stands out among the block of red brick workshops and auto shops in either direction.

Michelle Johnson notices, “We're in a black neighborhood and there aren't that many black people here. And I don't know where these white people came from.”

Black and Latinx people make up nearly 80% of residents in West Adams, Baldwin Hills and Leimert Park, according to 2018 US Census. However, white people make up at least 75% of customers inside this shop on this day.

“We always knew that Highly Likely was going to be something slightly more European looking,” says cafe co-owner Alex Matthews, who lives in West Adams with his wife.

He recognizes that his cafe is a sign that the area is changing: “If you've grown up here and you've been here your whole life to suddenly see something like Highly Likely in a neighborhood...I think it’s probably like an eyebrow raise.”

Myra Hassan works at the cafe and grew up in the area. She says black customers complain to her about the prices of food and drinks on the menu, and that many people who walk in don’t reflect the neighborhood.

However, she does appreciate the investments into the coffee shop and neighborhood. “I wish black people would own [the coffee shop] … but it's nice to just see some quality in the neighborhood for once,” says Hassan. 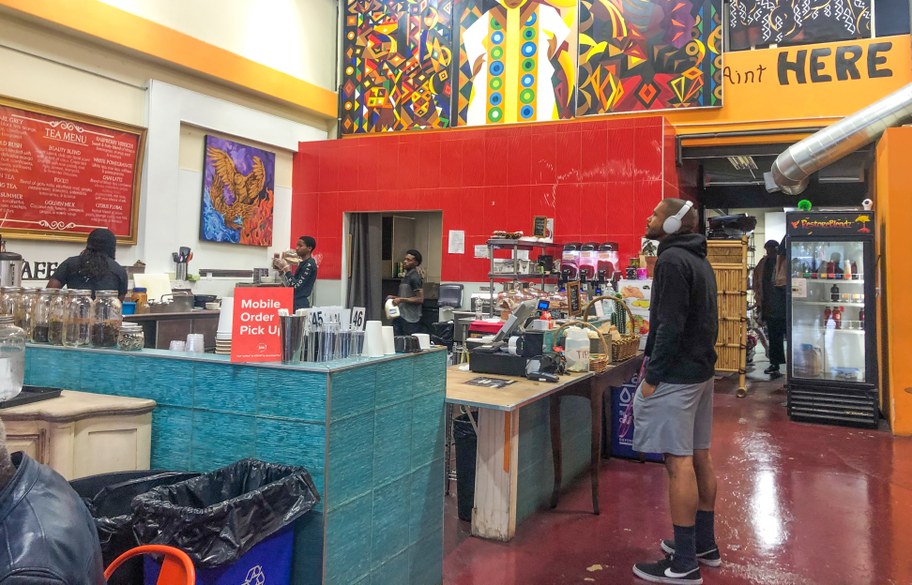 A man waits in line at the coffee bar at Hot and Cool Cafe in Leimert Park. Photo by Jerome Campbell.

Hot and Cool Cafe sits on the same block as black-owned Eso Won Books and the California Jazz and Blues Museum.

Most of the interior decor pieces, including the couches by the entrance, were donated by community members. That’s according to shop owner Anthony Jolly.

“The community found its pride and brought in stuff to create the feel,” he says.

For him, it’s important that all community members feel like they’ve made some kind of mark on the shop, including those who can’t afford a drink there.

Jolly says he even gives food to an unhoused woman who comes by to charge her phone, and the shop’s design needs to include her too.

“We don't throw people away just because they're having a hard time or misfortune, or they have a mental illness issue. …  We believe that they can be a part of this aesthetic too,” he says.

Johnson adds that black consumers might be discouraged from going to certain cafes because they might not know much about coffee, or the other customers there don’t look like them.

But Hot & Cool Cafe has a menu with pictures of the ingredients inside each drink, and that helps bridge a kind of education gap. 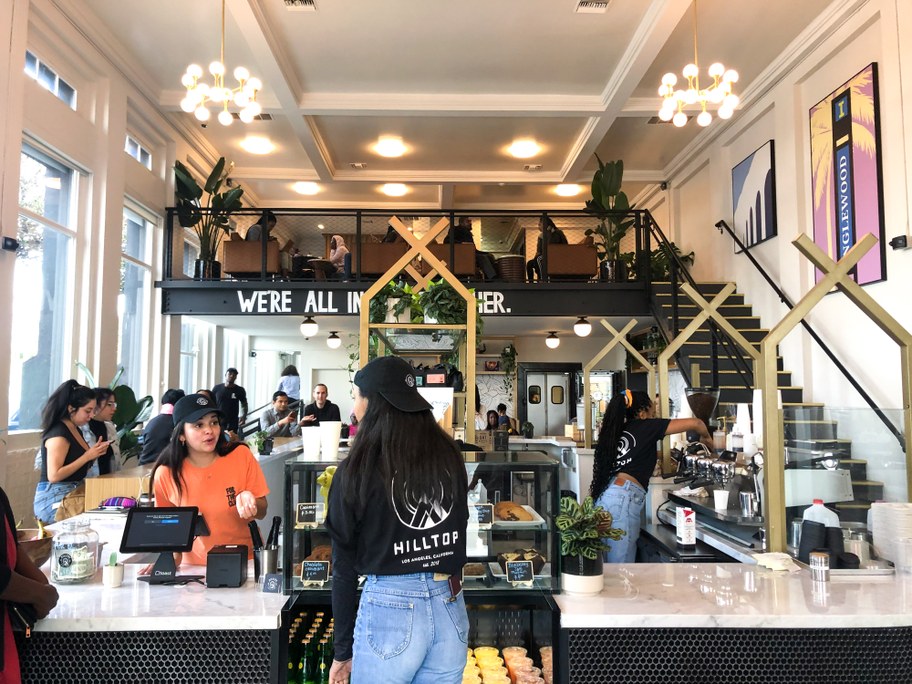 Inside Hilltop Kitchen and Coffee. Photo by Jerome Campbell.

At Hilltop Kitchen and Coffee, the decor features gold accents, and several chairs are upholstered with leather.

Co-owner Ajay Relan says the aesthetics are a mix of Inglewood and SoHo House, a members-only club in West Hollywood: “It's that sense of pride and almost luxury, but like approachable when you walk in.”

For Johnson, it’s a “coffee shop for black people with money.” She says the design reflects the African influence, but also feels inauthentic to the black people who live nearby.

The expensive-looking decor makes her wonder if a black-owned coffee shops could gentrify a black neighborhood.

“I still find that gentrification is a hard thing to grapple with when you take race out of it. … Now you have [to navigate] class. … At the same time, [Hilltop] is still a nice thing that I think that black people deserve,” she says.

In LA, choosing where to buy coffee is about more than what that soy latte tastes like. “I'll go to a spot where the coffee may not be that good, but the vibe is...

2019 was a tough year for the media landscape. An estimated 7,000 jobs were lost, and many publications went dark.

Did the Astros cheat the Dodgers out of the World Series?

Major League Baseball found that in the 2017 World Series, the Houston Astros concocted a scheme -- using video cameras and garbage cans -- at their home stadium to steal...