A 2020 graduate walks across the stage, 12 months after receiving her high school diploma. Photo by Caleigh Wells

The scene at Granada Hills Charter High School last week was a familiar one: Hundreds of students in black robes and caps walked across the football field, their names were announced, and they each took a picture with their new diploma.

It was also unlike any graduation in the school’s history. They wore masks and sat six feet apart from each other. They were each allowed to bring two adults, who sat in the sparsely-populated bleachers. The 1120 graduates were split up into two ceremonies, since the school couldn’t fit everyone on the field safely during a pandemic.

It was a far cry from last year’s ceremony, which took place virtually. Some students clicked on the YouTube link in their pajamas in their bedrooms. The school’s executive director, Brian Bauer, delivered his address from the middle of an empty football field. This year, his speech has a tinge of hope.

“I doubt many of us had any idea that a full year later, we would continue to be dealing with the single most unprecedented health crisis in our lifetimes. This coronavirus pandemic is perhaps the greatest challenge that any of us will face in our lifetime. And yet it is these challenges of life, students, that your teachers, counselors, coaches and other Granada Hills charter staff members have been working to prepare you for,” said Bauer. 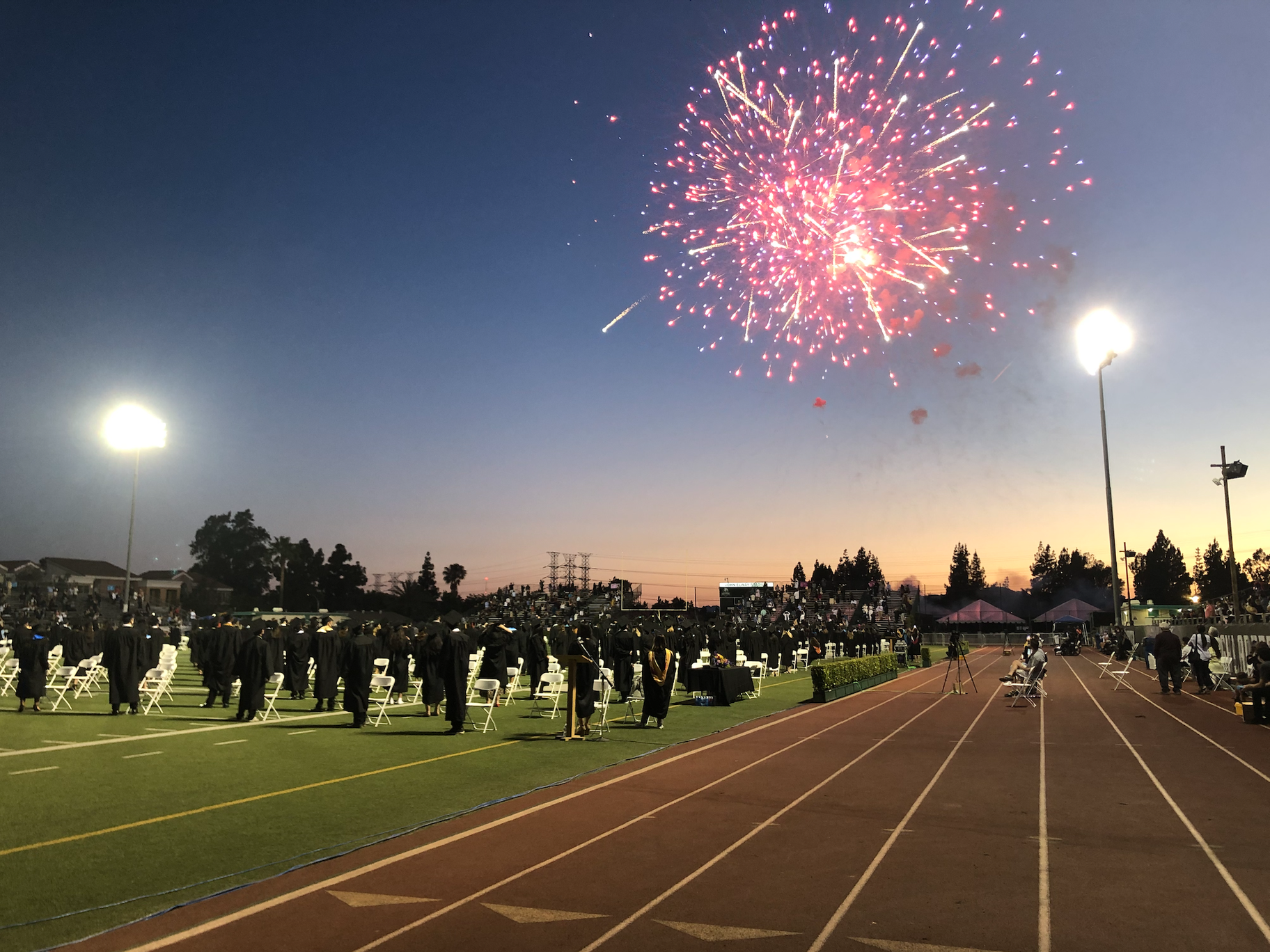 Even with all the extra precautions, the students say they’re thrilled to graduate in person. Zoba Ndife says it’s his first time on campus with his classmates since the pandemic forced the school to send him home in March of last year.

“I just was walking over there, and I saw my friend called Bennett, and I've known him since first grade, and I haven't spoken to him in a long time or seen him. And I was like, ‘Hey! How are you doing?’ It’s just crazy seeing these people again, and it sucks that we may not see each other again, and we may not see a lot of people I've seen throughout the school year again, but it’s still a good feeling,” he says. 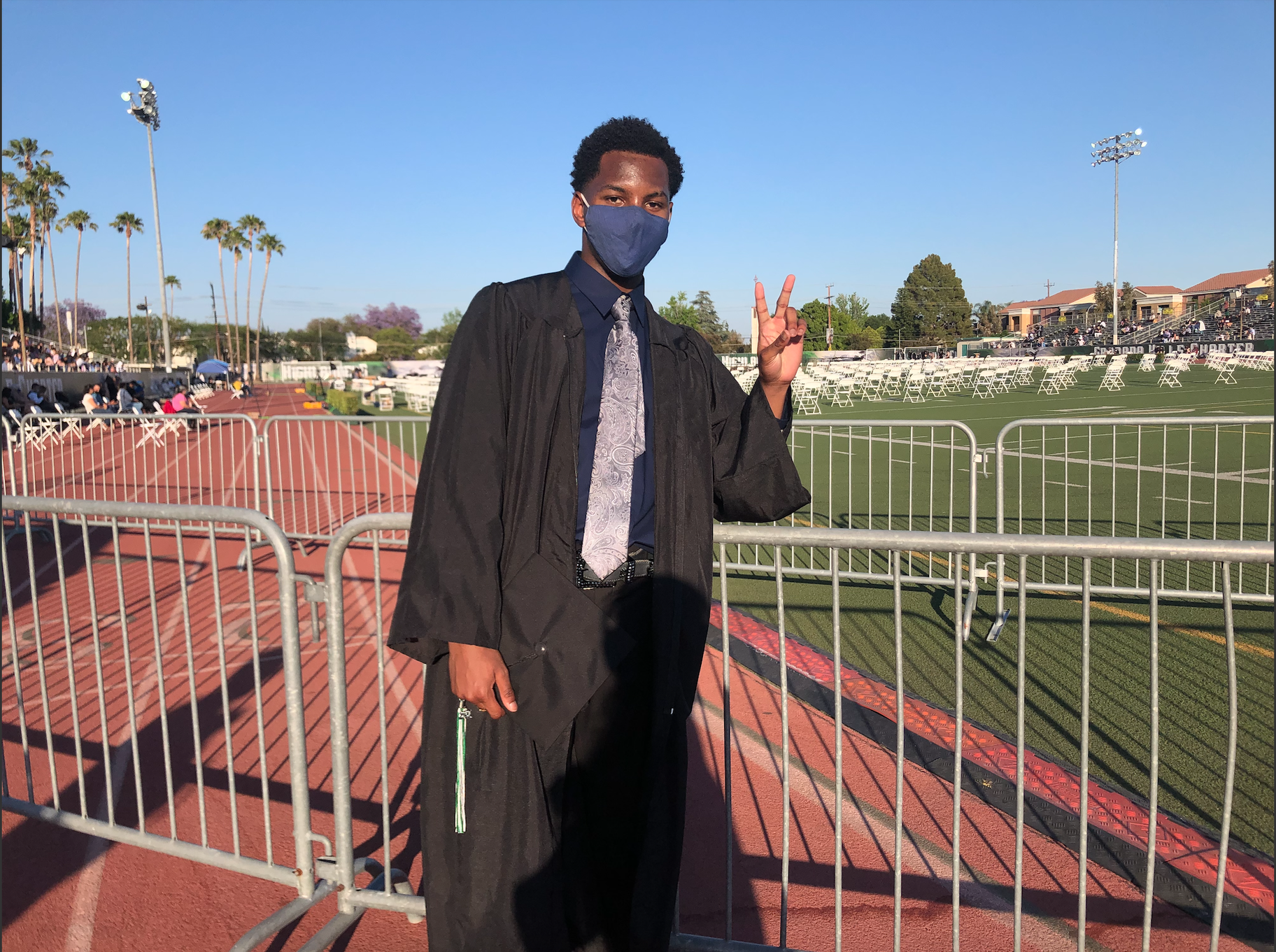 Zoba Ndife plans to attend The LA Film School to pursue his passion in music, after co-writing a song for his graduation. Photo by Caleigh Wells

Associated Student Body Vice President Dayanara Salinas says the students and staff decided to cancel prom so they didn’t risk a COVID outbreak that would force another year of watching graduation on Zoom. Instead, she and her friends got dressed up and danced in the backyard of a friend’s house last month. Salinas says it was well worth the tradeoff.

“It kind of feels surreal in a sense,” she says. “It still feels like I'm a junior in high school but nice seeing all my friends. And even though I can only graduate with half of the senior class, it’s really nice being able to all meet in person one more time before we move on with the rest of our lives.”

Graduating in person was so important to the class of 2020 at Downey High School, they voted overwhelmingly to postpone their graduation until they could do it together. Their ceremony just happened in May of 2021.

“Five hundred and five graduates from the class of 2020 have decided to return to their alma mater to participate in not only their high school graduation, but their first year reunion,” said principal Tom Houts in his opening address.

One year later, most of the 900 students wanted to participate, but there was only room for half of them physically distanced on the campus football field. One of the graduates on the field was Jaclyn Leon.

“It’s weird, but it’s not that weird, because I didn’t know my last day was going to be my last day, so it feels like my first high school reunion,” says 2020 graduate Jaclyn Leon. 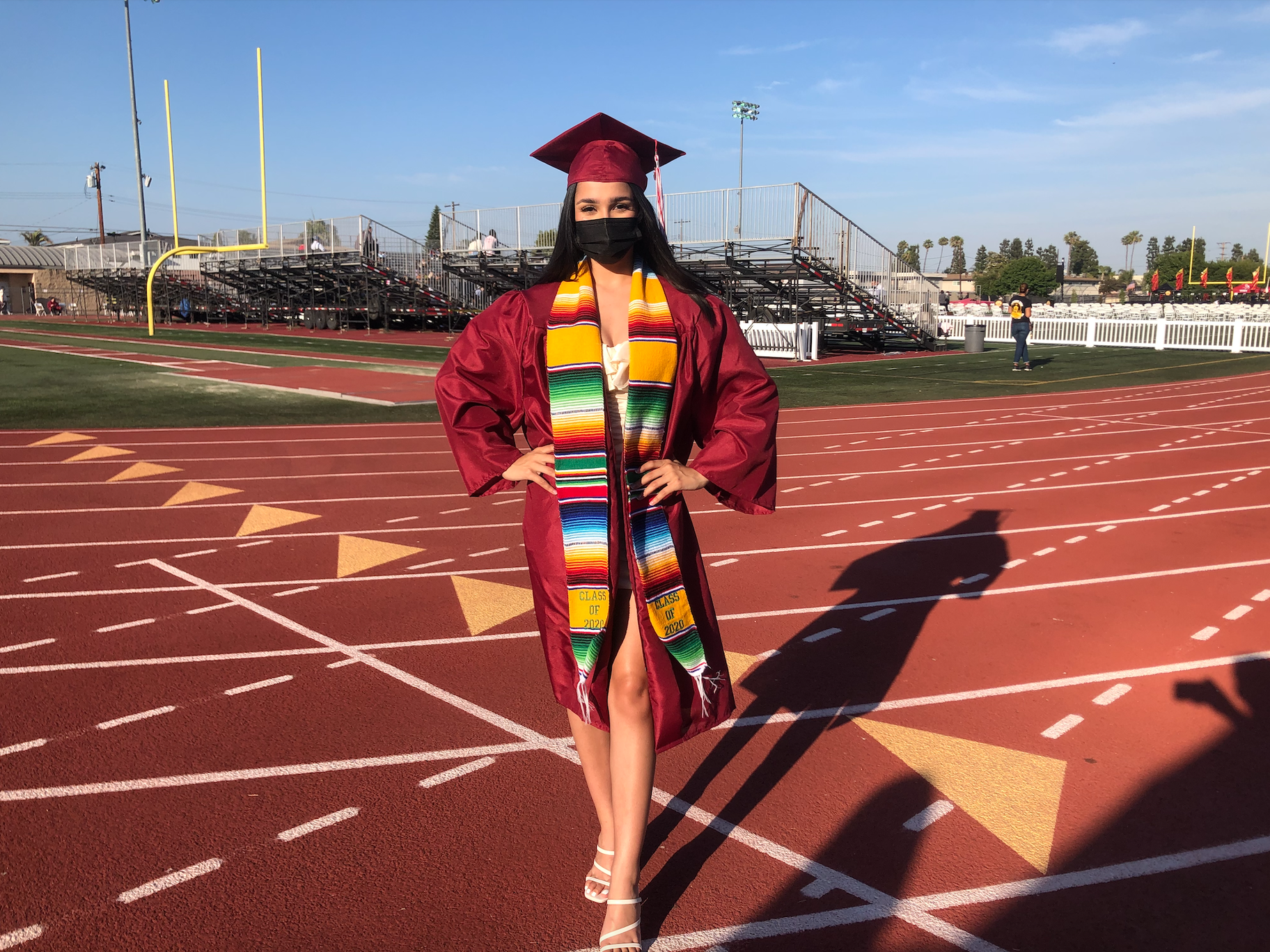 Rising college sophomore Jaclyn Leon is studying to become a nurse after graduating from Downey High School more than a year ago. Photo by Caleigh Wells

Janelly Durazo has spent the past year studying to become a nurse and working as a Starbucks barista. She says coming back a year later gives her family closure.

“Literally a year ago today, we didn’t ever think we’d have this, so to hear the news that we were going to have a real graduation is pretty surreal to me,” she says. “I decided to come back only because I feel like it’s a part of growing up, becoming an adult. High school graduation is something that’s very sentimental, especially to me and my family. I don’t know about the rest of the students, but Mexican culture, graduating is something very very huge, and I feel like it’s important to be here.” 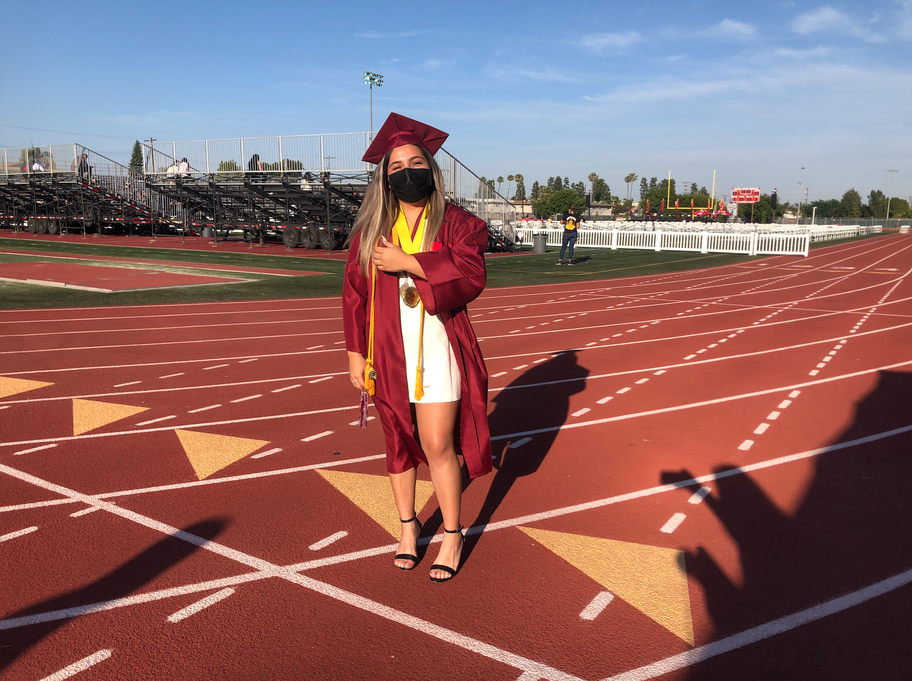 Janelly Durazo, a 2020 graduate, was hesitant to come back for her high school graduation at first, but said it was an important moment of closure for her and her family. Photo by Caleigh Wells

The ceremony even featured musical entertainment by 2020 graduate Pedro de Anda, who earned himself a reputation as the student who took the campus security golf cart for a joy ride just hours before the school closed due to the pandemic.

Houts says after hosting two graduations for the class of 2021, the energy at the ceremony for the 2020 graduates was “through the roof.” He might also be biased, since his daughter was one of the graduates who walked across the stage tonight.

“Your best time in high school is your second semester of your senior year, and that was basically ripped from these kids. So that’s why I’m just so happy to see them back and they’re so excited to be here.”

High school seniors say their in-person graduation ceremonies this year are surreal and sentimental. Some graduates of 2020 waited a year so they could turn their tassels...

Texas beekeeper Erika Thompson posted a video of her removing a swarm of bees from an umbrella and moving them into a box — all with her bare hands. No protective gear...

A native Angeleno, Lynne Thompson says the city informs the way she writes.