Ever dreamed of flying over LA traffic? There’s a new company for that Arnel Guiang had one of those L.A. drives you would not wish on anyone.

“I used to commute daily on the 60, to the 605, to the 105, to El Segundo every single day,” Guiang recalls, standing on the tarmac of Brackett Field Airport in east L.A. County.

The nearly 90-mile-long slog between his Pomona home to the Northrop Grumman office just south of LAX. and back defined his life, he says. Guiang rarely, if ever, made it on time to morning meetings. He spent hours upon hours each week in gridlock.

“Because I lived so far away, I was usually the late guy,” Guiang says.

Until one day, a coworker made a suggestion that he only dreamed about while raging in bumper to bumper traffic: “Why don’t I take you out in the plane sometime?” 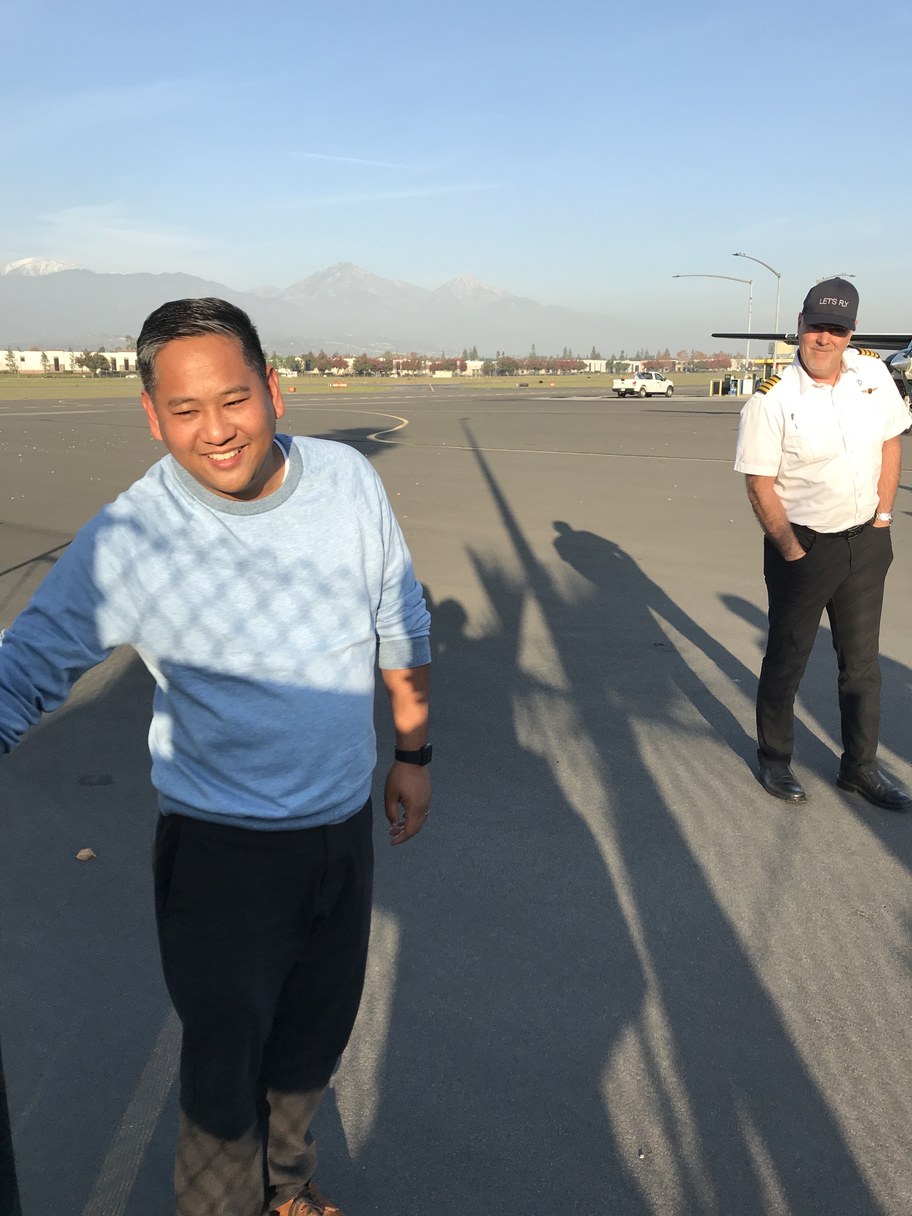 Arnel Guiang (left) and pilot Greg Landers on the tarmac at Brackett Field Airport in Pomona. Photo by Benjamin Gottlieb.

Guiang says the first time he landed in Hawthorne, the experience changed him.

“[It] took about 15 minutes to get home from Hawthorne Airport. It was like nothing,” he says. “And I knew from that point on, I said, ‘Hey, what if I did that as a business? What if I did that every single day?’”

That flight, Guiang says, was the spark for his budding commuter flight business called FLy Over All Traffic (FLOAT). He is one of the company’s cofounders, which is angling to begin flying passengers above L.A.’s congested freeways later this year. 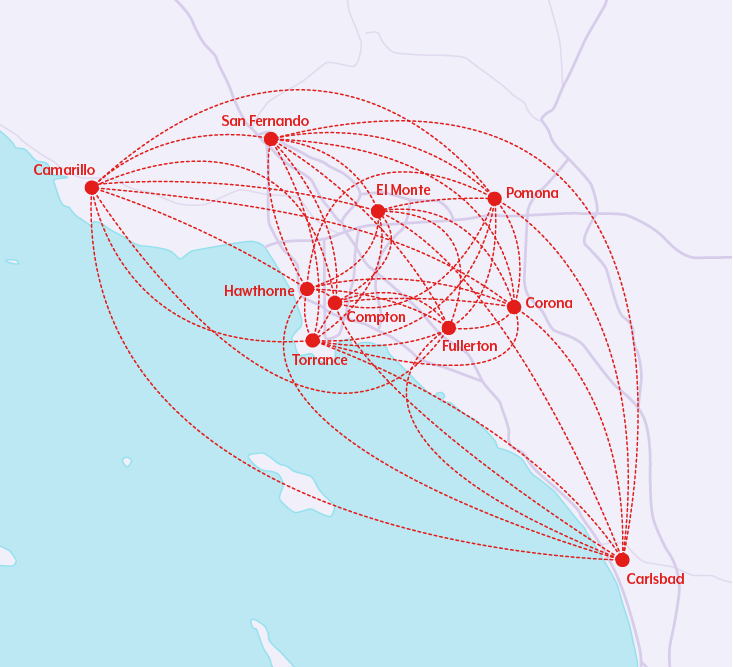 Some of the proposed routes that FLOAT could fly, connecting regional airports around Southern California. Photo courtesy of FLOAT.

Pricing for the service starts at $1,250 a month for commuter flights 5 days a week. The company plans to take advantage of Southern California’s vast collection of small airports and airfields, says Lisa Walker, who is a pilot and handles public relations for FLOAT. She admits it may not help solve the region’s traffic problems, but it is a start.

"There’s no one solution,” Walker says. “But we think we can be a part of it. You know, one of the biggest problems with mass transportation is that it’s point A to point B. Sometimes that does not work for everyone.”

Walker says the company has its initial flight paths from the Federal Aviation Administration (FAA), but it cannot release them yet because of federal rules. 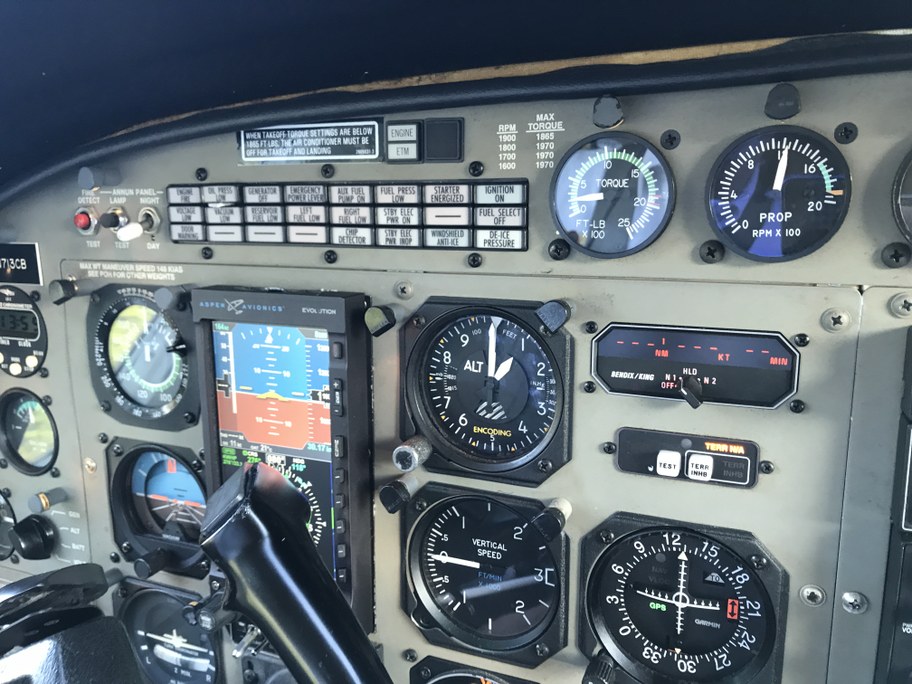 A view from inside the cockpit of one of FLOAT’s commuter airplanes. Photo by Benjamin Gottlieb.

“There’s no TSA. There are no crowds,” says pilot Greg Landers, who flies one of FLOAT’s Cessna Grand Caravan planes. The aircraft seats 11 passengers, including the pilot.

“People aren't distressed by the time they walk in the door of the airport. It’s just a fun environment to fly in,” he says.

But the idea is hardly a new one, and Walker admits the company is taking advantage of existing technology: the regional airports and in-use aircraft. What remains unclear is whether or not the company can be successful in the long-term.

Shon Hiatt at the USC Marshall School of Business says there are similar ventures that have shown promise in other cities. In Sao Paulo, Brazil, he says business executives often use helicopters to fly over the gridlock below, some of the worst in the world.

If the numbers add up for high paying professionals in L.A., he says, the business could grow. 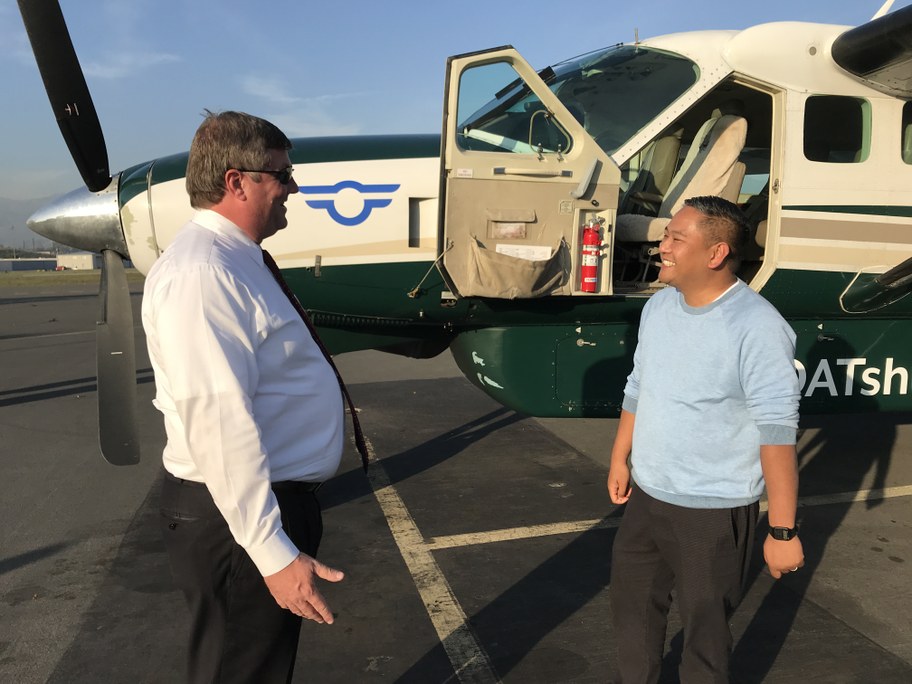 Arnel Guiang (right) says he hopes to expand his company in the coming months to include more planes and more routes. Photo by Benjamin Gottlieb.

“The average Angeleno spends 81 hours a year idling in traffic,” Hiatt says. “So if we look at the economics, the opportunity cost for a highly paid professional in law or finance making $500 an hour to drive - versus taking a commuter flight - could be up to $40,000 a year.”

The economics, however, are just one piece of the puzzle. Emissions from airplanes are a major source of CO2 pollution. A recent study by the United Nations found that greenhouse gas emissions from commercial air travel across the globe are growing faster than anticipated.

While FLOAT may not be positioned to make a dent in that trend, Walker says the company is looking at new aircraft technology, even though it may be years away. 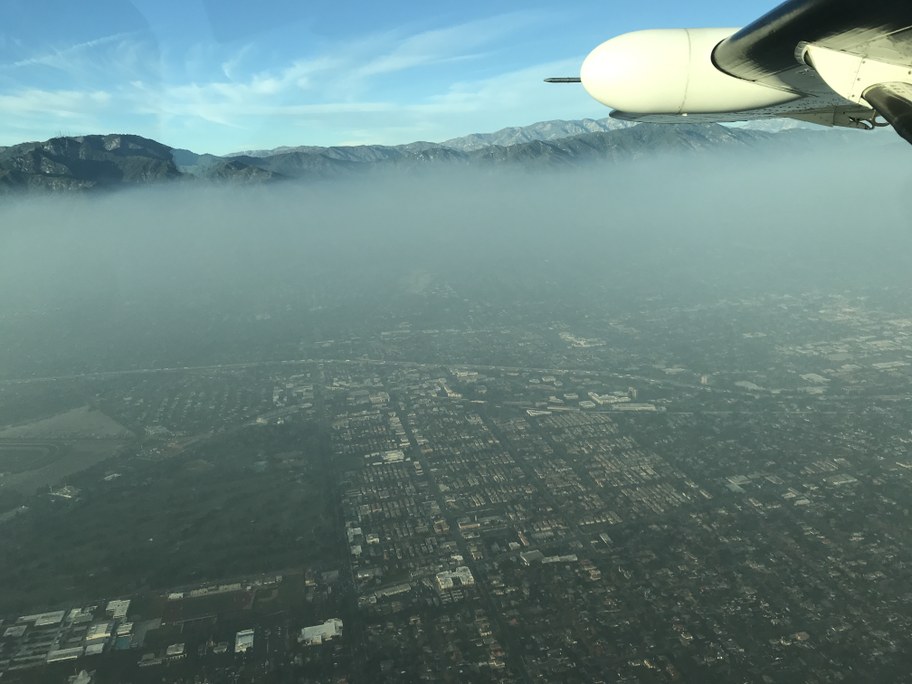 A view from FLOAT’s Cessna Grand Caravan plane looking down at the San Gabriel Valley. Photo by Benjamin Gottlieb.

“The technology is moving toward electric planes. That’s the path of the future,” Walker says. “So it will become more environmentally safe as time goes on. What we are doing is using existing airfields that are underutilized, existing FAA rules and existing infrastructure to start solving this traffic problem now.”

Commuting in LA – by plane

Ever dreamed of flying over LA traffic? There’s a new company for that

FLy Over All Traffic (FLOAT) is angling to begin flying passengers above L.A.’s congested freeways later this year.

Why the Women’s March is still relevant

Tens of thousands of people are expected to gather this Saturday in downtown for the fourth annual Women’s March LA. But some critics are questioning the relevance of the...

Changes are coming to the Firehouse restaurant and Arts District

Downtown LA’s Arts District has been turning into the hippest of hip meccas with happening hotels, restaurants, retail, and office space. But recently, there have been a few...