This cable-stayed bridge is held up by 80 white cables attached to two towers, which do the heavy lifting. Photo courtesy of Denis Wolcott/the Gerald Desmond Bridge Replacement Project.

After 10 years of construction and nearly $1.5 billion, the replacement Gerald Desmond Bridge in Long Beach opened to traffic.

The bridge brings more engineering drama to an area that already has the green Vincent Thomas suspension bridge. The two-mile, six-lane new crossing soars above the water, but it appears light and elegant.

Designed by Arup, it is California’s first cable-stayed, vehicular bridge (the new North Atwater bridge in Los Feliz is a cable-stayed pedestrian crossover). This means all the heavy lifting is done by two slender but very strong towers. Attached to each of those towers are 40 cables that splay out like a fan or a skirt to the edge of the bridge.

The new bridge — to be renamed eventually — was built primarily because the port needed a taller bridge and wider dock to allow bigger container ships entry. 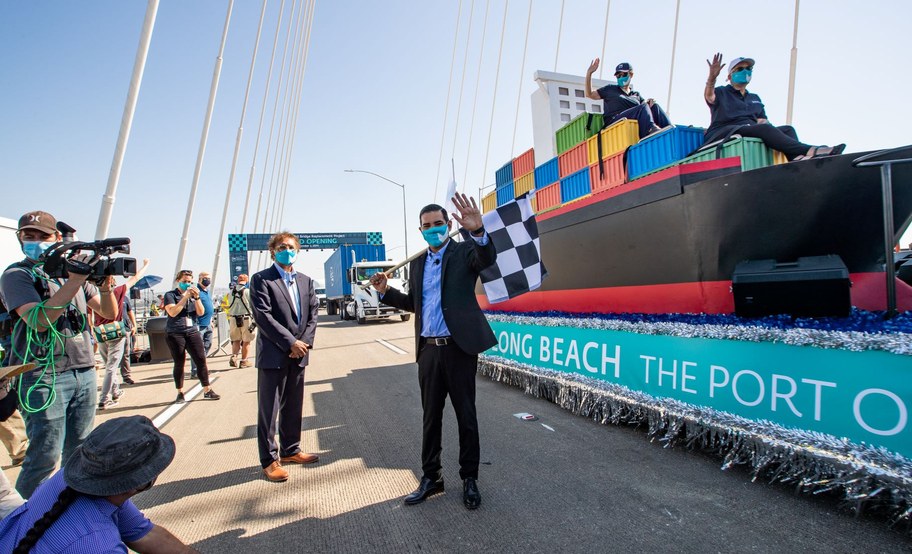 The global transport of goods, however, is a big contributor to carbon emissions. At the same time as the Port of Long Beach is celebrating its new bridge, it is displaying its green initiatives. At the virtual opening for the bridge, the port made a feature of the clean energy trucks — powered by electric battery or compressed natural gas or fuel cells — that they hope will replace the diesel trucks driven by most truckers. 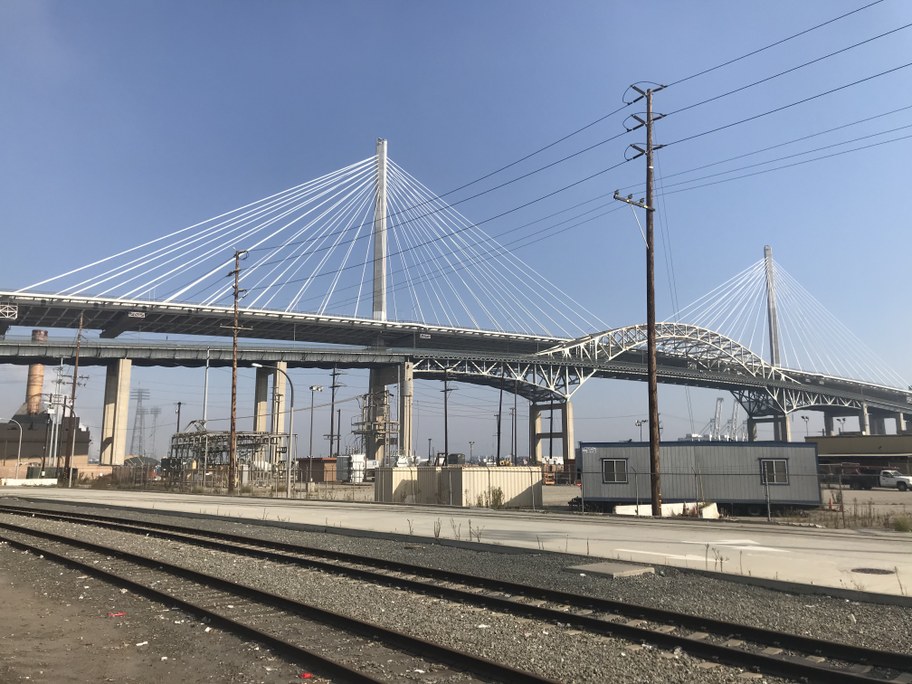 The Gerald Desmond Bridge is seen from the ground. The original 1968 bridge sits alongside but will be demolished. Photo by Frances Anderton/KCRW.

As for the experience of the bridge itself, one Port of Long Beach spokesperson, Denis Wolcott, described the first drive on it Monday as exhilarating and giving “chills to the soul.”

That thrill will extend to pedestrians and cyclists. A lane for bikes and walkers is still under construction. The bridge goes up to 205 feet above water level and a mile of that is over the sea.

Child care safety during the pandemic

Parents have no clear guidance on when it’s appropriate to send their toddlers and babies to day care centers.

When the pandemic hit in March, and the economy started to tank, but the housing market so far hasn’t crashed. In August, the median home price in the region reached a...

After 10 years of construction and nearly $1.5 billion, the replacement Gerald Desmond Bridge in Long Beach opened to traffic.