Stella Kim and James Cannon arrived at Kedren Community Health Center at 5 a.m. to wait in the standby line for COVID-19 vaccines. With about 30 people in front of them, they felt they had a 50% chance of getting a shot that day. Photo by Caleigh Wells.

Every day, dozens of people form an unofficial standby line on the sidewalk outside.

Before the sun rises, there are already about 30 people in line. At the front is Michael Jansen. He and his teenaged son arrived from Silverlake at 7:30 the night before. He brought food, entertainment, panchos and tarps for the rain that morning, and a tent to sleep in. It’s not his first rodeo.

“We started on a whim, we just heard about it through a text, someone saying, ‘Hey, there’s extra vaccine.’ We’re like, ‘Okay, it’s leftover vaccine, it’s not hurting anyone, it’s leftover,’” he says.

It’s his sixth time standing in this line, hoping to get lucky. “I feel like it’s a civic responsibility to get a shot in your arm as quickly as possible. I would hate for things to get thrown out,” he says.

Kedren opens every day at 8 a.m.  When it closes at 4 p.m., vaccines that didn’t get used during the day could go to people camping in tents or sitting in lawn chairs outside.

After Jansen is a man named Ben. He wants to be identified only by his first name. Many people in line are entertainment industry workers or company founders, and they worry about friends and colleagues knowing that they’re traveling to Kedren Health to wait for a leftover vaccine.

“I haven’t seen my family in a while, and they’re in Florida, and they’re doctors and they’re vaccinated. And so I would like to eventually — once I’m immunized — travel and see them,” Ben says. 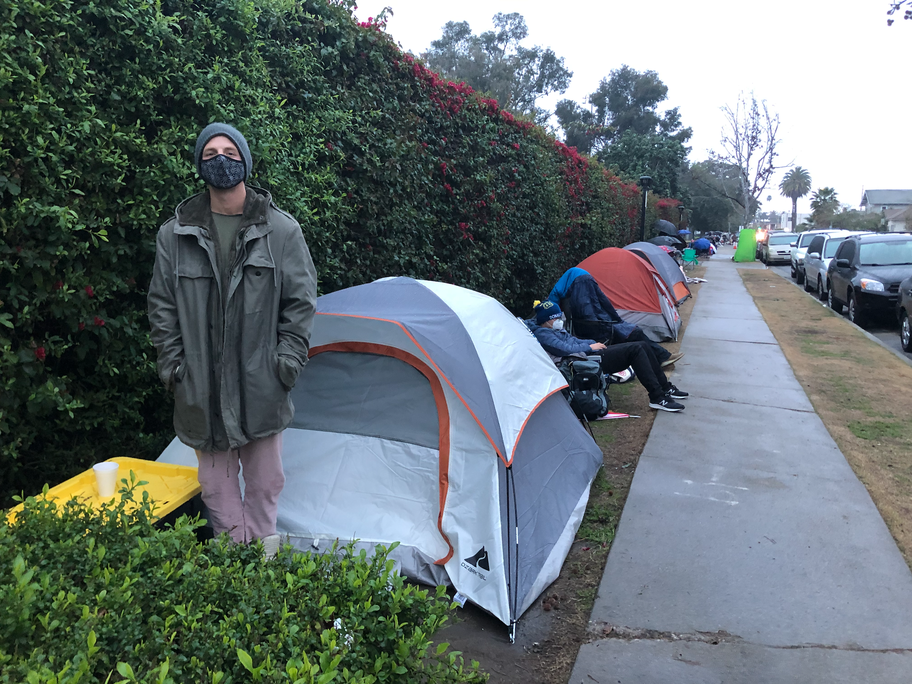 Ben, who chose to withhold his last name for privacy reasons, arrived at Kedren Community Health Center at 10:30 p.m. to secure a spot in the COVID vaccine standby line for the next day. He slept in a tent he bought for $20. Photo by Caleigh Wells.

Ben lives in Venice. Other people in line hail from Encino, Hollywood and Hancock Park. They’re passing the time on their laptops or tablets.

Most people in the queue are white, so they’re conspicuous in the Historic South Central neighborhood of LA, where 97% of residents are Latino or Black, and the median household income is less than $40,000.

By noon, the line resembles a lively tailgate party. Some people brought bluetooth speakers. One group brought a card table and is playing Settlers of Catan.

Stella Kim has the day off from her job in retail. She came at 5 a.m. and brought a Nintendo Switch and plenty of snacks.

“Being able to have that peace of mind is invaluable, and since we don’t really know when it’s going to be our turn,” she says. “I fully recognize that we’re privileged enough to be able to sit here all day long. Not a lot of people can spend that time to do that,” she says.

Kim learned about the line through word of mouth. There are also local Facebook groups and websites that publicize where leftover vaccines are available, and they’re growing in popularity.

There’s a sense of camaraderie. Some of the people who have been here before recognize each other and have become friends.

Around 3:30 p.m., a half hour before the clinic closes, the vibe changes. All at once, they pack up their tents and lawn chairs and face the front gate. The backyard barbecue has become a single-file queue. Everyone at the front is nervous but excited.

“I’m pretty sure we’ll give seven of them at least,” says a woman in scrubs to the people at the front. “You’re really close.” 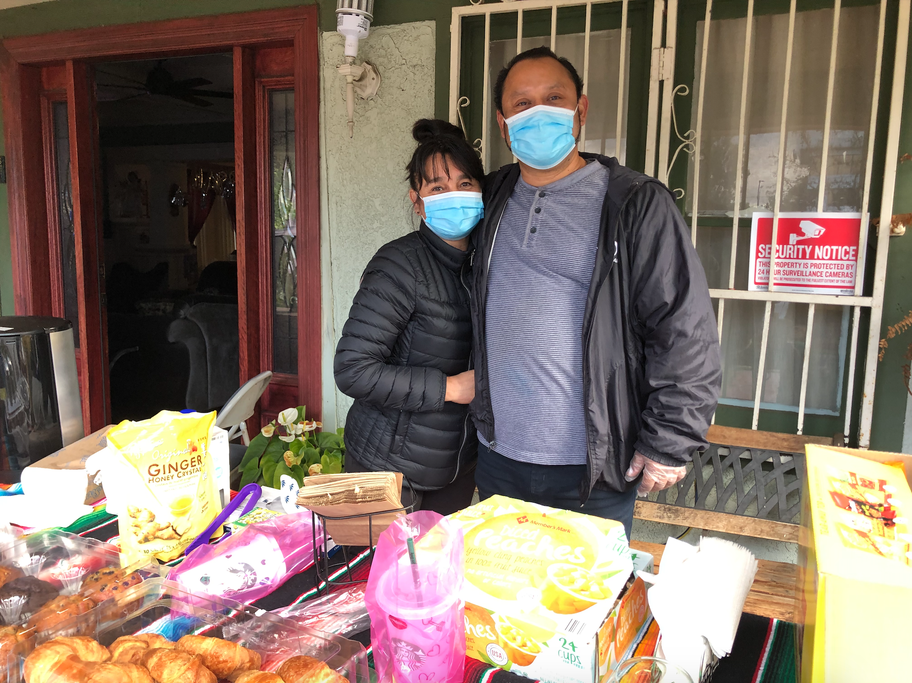 Jorge Guerrero and his partner Christina Solano live across the street from Kedren, and started selling food and coffee from their front porch to the people in line. Photo by Caleigh Wells

Meanwhile, a steady stream of cars drives up and drops off  people who are almost all Black and Latino and under age 65.

This group stands to the left of Kedren’s gate, while frustrated overnight campers are to the right. All have their eyes on the doors, waiting for someone in scrubs to tell them there’s a shot inside for them.

The people in line get uncomfortable. “They’re kind of here under another pretense, thinking they can cut the line,” says Ben.

Victoria Sance watches the scene. She waited in the standby line and got her shot last week. But she keeps coming back.

“I was the only Black person in the line. What’s wrong with that picture, lady? If all these white people know, how come the Black people in the community don’t know that there's been extra vaccine?”

She says she’s designated herself as a sort of poll watcher for this standby line.

People in line begin to heckle Sance. “Tell us where to stand,” calls one of them. Because yes, there are unofficial standby lines in Encino and West Hollywood, but Kedren Health is known for having more leftover doses.

An hour after the clinic closes, about 30 people from the local community who arrived later are escorted inside.

Kedren Health Center officials have been watching this scene for days, and finally they decided to do something different. People from the neighborhood — the 90011 zip code —  got to go first. Everyone else in the standby line had to wait.

The head of vaccine distribution, Dr. Jerry Abraham, says the clinic is doing what it can to serve those at highest risk for getting COVID-19.

“Our neighbors here at Kedren are a 80-90% predominantly Spanish-speaking Latinx community. Why are they not getting through?” he asks. “90011: That’s a zip code with a very high heat map for infection rates. There’s a clear reason why they might be able to walk through or skip ahead or be prioritized.”

Abraham has heard from community members angry when they see white people waiting for vaccinations.

“There are those tensions that exist, and we are doing everything we can to be peacemakers and to get this vaccine out as quickly and as safely as we can. And we want to avoid conflicts between the groups that are finding their way outside.”

Outside Kedren, the sun has set and it’s getting cold. Finally, the doctor comes out to the standby line. He says he waited and stayed late to make sure every last vaccine was used that day. And then he announces that none were available for the people in line.

Within minutes, the line dissipates. Ben stays behind to pack up the $20 tent he bought the week before.

He says he understands why Kedren prioritized the neighborhood residents, but he’s frustrated by the unpredictability of it all.

“It doesn’t feel like there’s much consistency to what’s going on here. It feels like people trying to get backstage at a concert, and some people know the DJ, and some don’t.”

He says after 19 hours on this sidewalk, he’ll go home to catch up on the work he didn’t get done sitting in his tent all day. He’s not sure yet if he’ll come back or if it’s time to give up and wait his turn.

People ages 65 and up can currently get vaccinated against COVID-19 in LA County. But the public health department says fewer than half of that age group have received the...

The deregulation of electric utilities in California has been an issue for years. More cities are choosing to join forces and do their own thing when it comes to purchasing...