Kai Lenny hydrofoiling at home in Maui, Hawaii. Maui is the unofficial center of the hydrofoiling world. Many of its innovators, companies, and stars are based there. Photo by Jake Marote/Red Bull Media House.

Since the pandemic started, local surf lineups in Southern California have become so overcrowded that they’re akin to gladiator pits. But there’s a new type of surfing that lets the rider skip those mosh pits: hydrofoiling. With the hydrofoil, the whole ocean becomes surfable.

About three years ago, there were hardly any foilers in Southern California, but today there are likely hundreds. Still, hydrofoiling isn’t for everyone. It’s difficult to learn, it’s expensive, and it’s dangerous.

Hydrofoiling’s undisputed star is Hawaiian big wave surfer Kai Lenny. He’s the ultimate waterman. Kite surfing, windsurfing, free diving, stand up paddle boarding — he does it all at an expert level. Each one of these water sports is perfect for certain ocean conditions — windsurfing when it’s windy, paddle boarding when the waves are small or non-existent, etc. But hydrofoiling is perhaps the most versatile of them all.

Hawaii native Kai Lenny is the iconic waterman of his generation. He can do hydrofoiling, kitesurfing, windsurfing, free diving, stand up paddle boarding, and big wave surfing all at an expert level. Photo by Jake Marote/Red Bull Media House.

Lenny didn’t pioneer the idea, but he’s credited with making it more mainstream.

Lenny says hydrofoiling is possible in any ocean condition. “The coolest thing about the hydrofoil is the ability to ride the biggest waves in the world and the smallest waves of the world.”

The hydrofoil was developed by the U.S. military over 100 years ago to make torpedo boats faster. More recently, people started putting hydrofoils on boards for recreation. The hydrofoil itself is a very strange looking object. A hydrofoil board is made up of three parts: A board, a mast attached to the board, and then the actual hydrofoil attached to the bottom of the mast.

“The best way to describe a hydrofoil, it's an underwater airplane. And so you have a front wing that creates a lot of lift and a back wing as a stabilizer,” says Lenny. 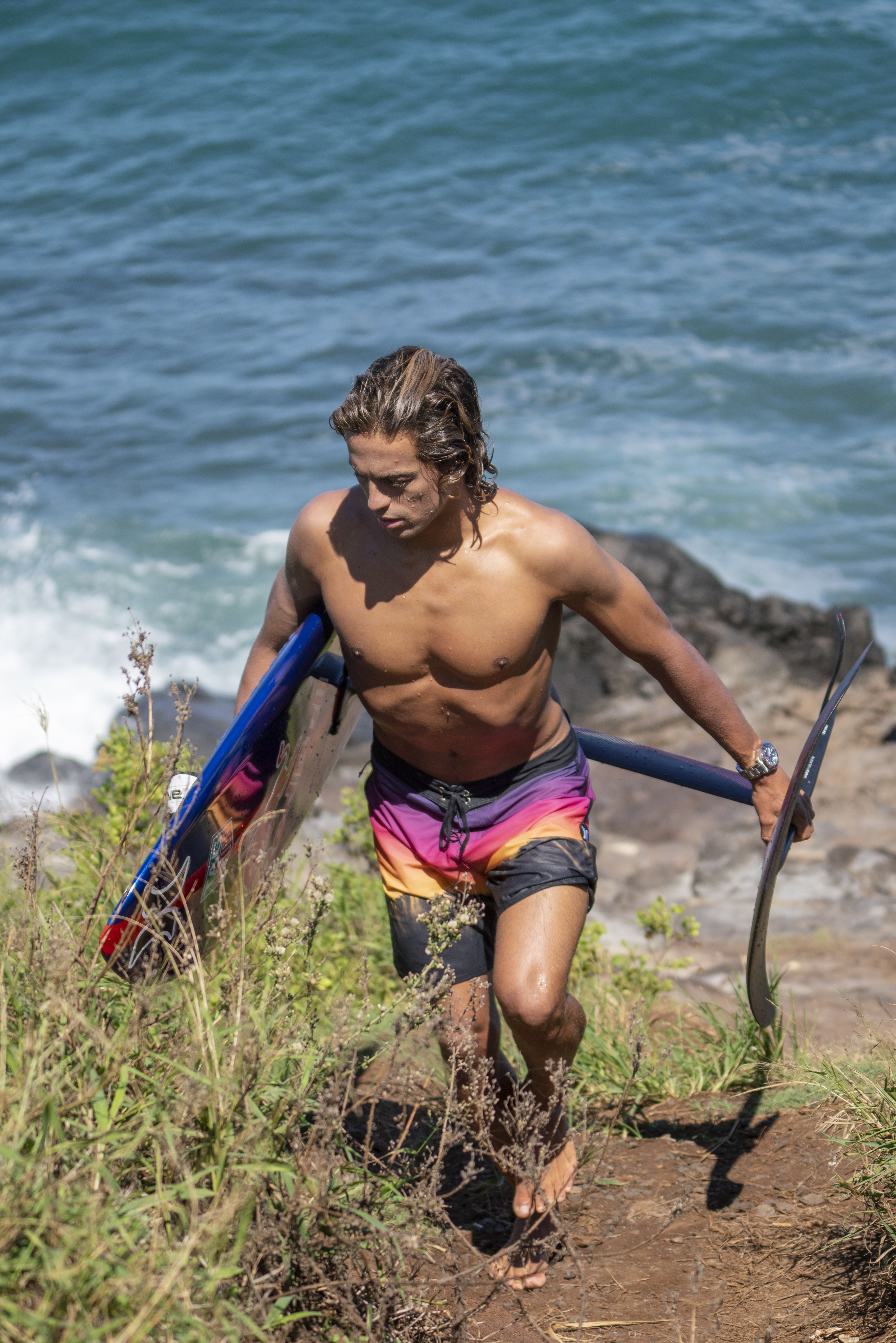 Kai Lenny was mentored by Laird Hamilton and the “Strapped Crew,” who are hydrofoil surfing’s pioneers. Lenny describes a hydrofoil as an underwater airplane. Photo by Jake Marote/Red Bull Media House.

When water runs over those wings, it pushes the board up and out of the water about a foot or two. This raises the rider out of the water and makes it look like they’re actually flying over the water. It’s similar to how an airplane lifts off when its jet engines propel it forward.

In 2017, Kai and his brother Ridge Lenny started the Hydrofoil Company, which designs hydrofoil boards. One of Kai Lenny’s big innovations was a hydrofoil board that lets riders paddle into waves themselves. Previous hydrofoil designs, like those developed by Laird Hamilton, required the rider to be strapped in and then towed into a wave.

Today Lenny is at Pillar Point Harbor in Half Moon Bay in Northern California. He’s going out to foil Black Hand Reef, just to the side of Maverick’s, the legendary big wave spot. He’s going to be towed into the waves by a jet ski. The waves today are somewhere in the 20 feet tall range. It can get dicey quickly out there, so it’s best not to go out alone. 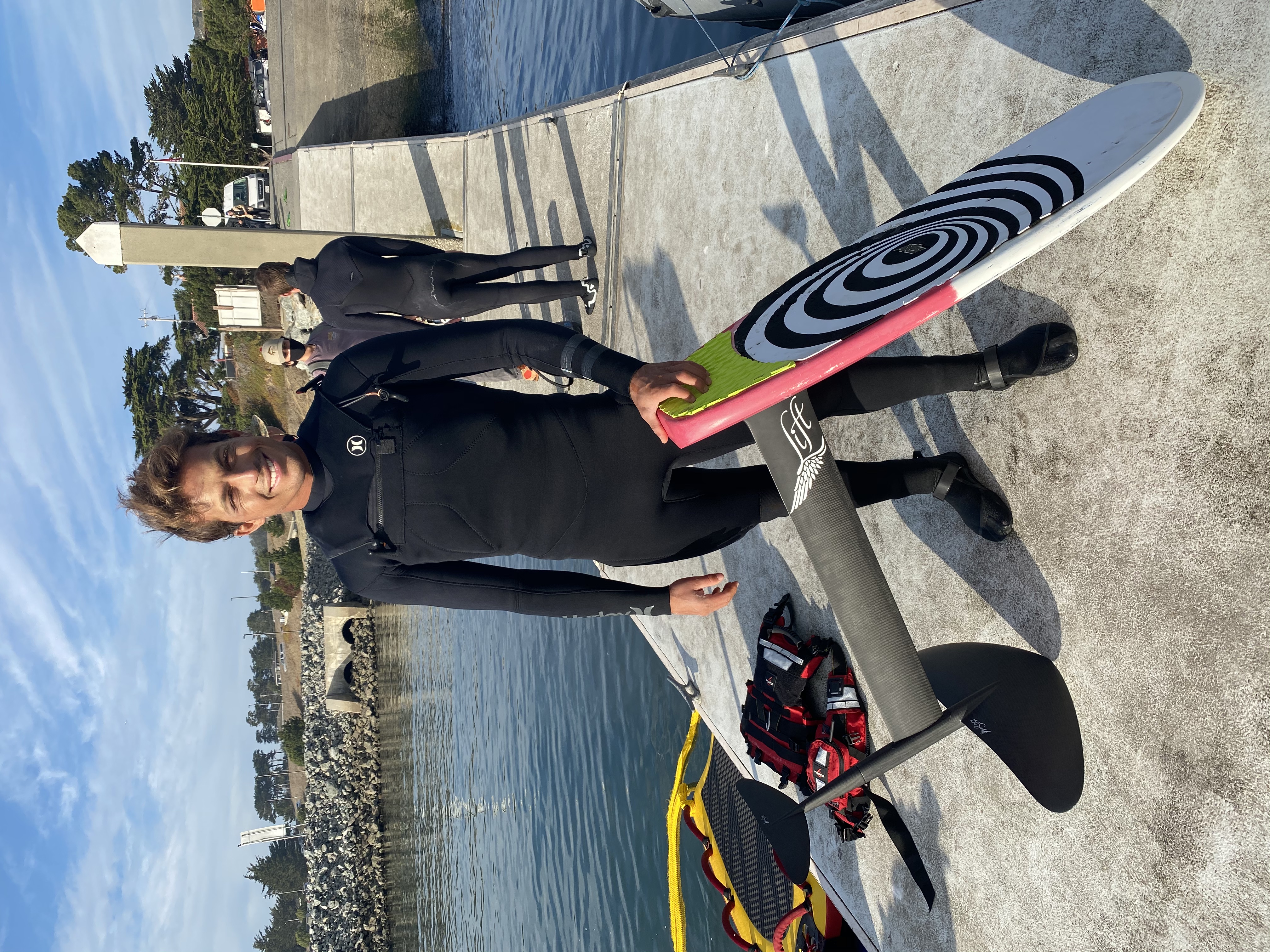 Kai Lenny just before he hits the water in Half Moon Bay, San Francisco. Photo by Adriana Cargill

Lenny throws his board into the water, grabs the tow rope and holds on as the jet ski speeds up. The hydrofoil lifts out of the water and it looks like he’s floating about a foot above the water, giving him the appearance of levitating.

They head straight out to where the waves are breaking and whip the ski around throwing Kai into a 10-foot tall wave about to break. Instead of getting the wave, Lenny falls off his board because he’s hit kelp.

One downside to foiling is that it can get caught on sea life. On occasion, foilers have also hit sharks, turtles or other creatures. Because when this thing gets going, depending on the type of foil, it can hit 40 miles per hour.

Lenny is towed into another wave, this one is 15 feet plus in size. He lets go of the tow rope and starts carving up and down its face. He moves so fast, it’s hard to clock what he’s doing. The foil cuts through the water like a hot knife through butter. It looks like he’s dancing on the wave.

It's easiest to learn how to hydrofoil by being towed behind a jet ski or boat. In Los Angeles and Orange County, there are a few different teachers who offer lessons. One is Peter deAvila, who is based in Marina del Rey. He tows students behind his boat for two hours at a time in the Santa Monica Bay.

His basic tips on riding the foil: “This is its own balance. Can't compare it to anything. The three angles you're dealing with are pitch, roll, and aw, just like an airplane. So you're basically flying an airplane with your feet.” 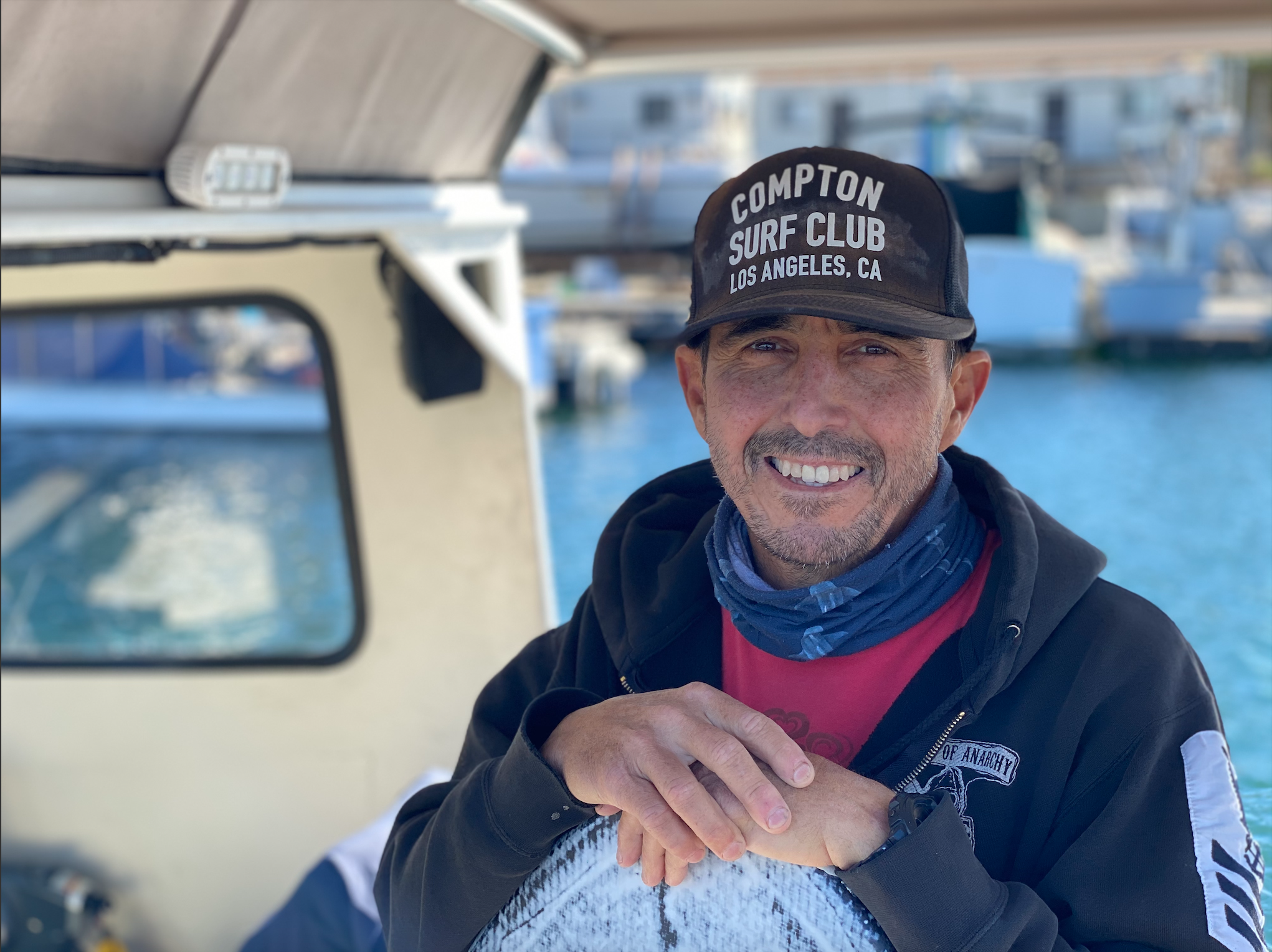 Peter DeAvila is a hydrofoil instructor based in the LA area. He runs hydrofoil lessons through Airbnb’s experiences. Photo by Adriana Cargill. 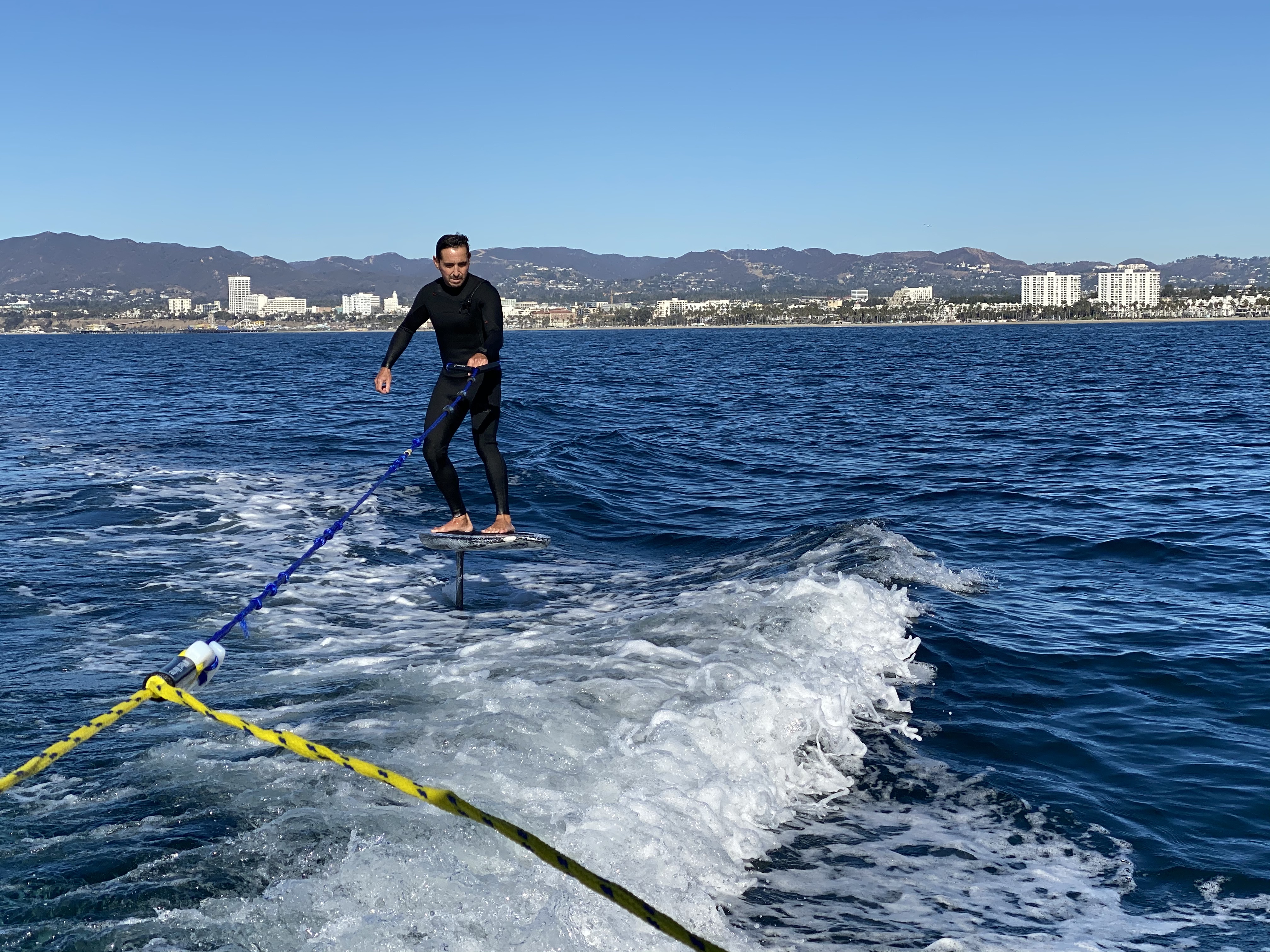 Peter DeAvila foiling the waves of the boat wake in the Santa Monica Bay. Photo by Adriana Cargill.

Ari Soffer is one of deAvila’s former students, and he says it took him about a year to learn. But he’s a huge fan, even after getting pretty injured.

“I dislocated my shoulder a few months ago. We were doing a downwind run from Leo Carrillo down to Zuma. It was super windy and gusty. I actually fell in the water. And then the wind whipped up, and I had the leash attached to my left arm. And the thing flew over my head and just pulled my arm out of [its] socket,” Soffer says.

Soffer foils with a wing, which he uses like a sail for a windsurfer. With the wing, he doesn’t need waves at all to foil. The wing catches the wind and it powers him through the water. Now, Soffer clips his wing to his life vest instead of his arm to ensure he doesn’t dislocate his shoulder again.

“Dude, this is the most revolutionary thing ever,” says Soffer. “You can literally with the wing … it flies on the wind, it floats, puts no strain on you, and you can use the same thing to power you out into the ocean.” 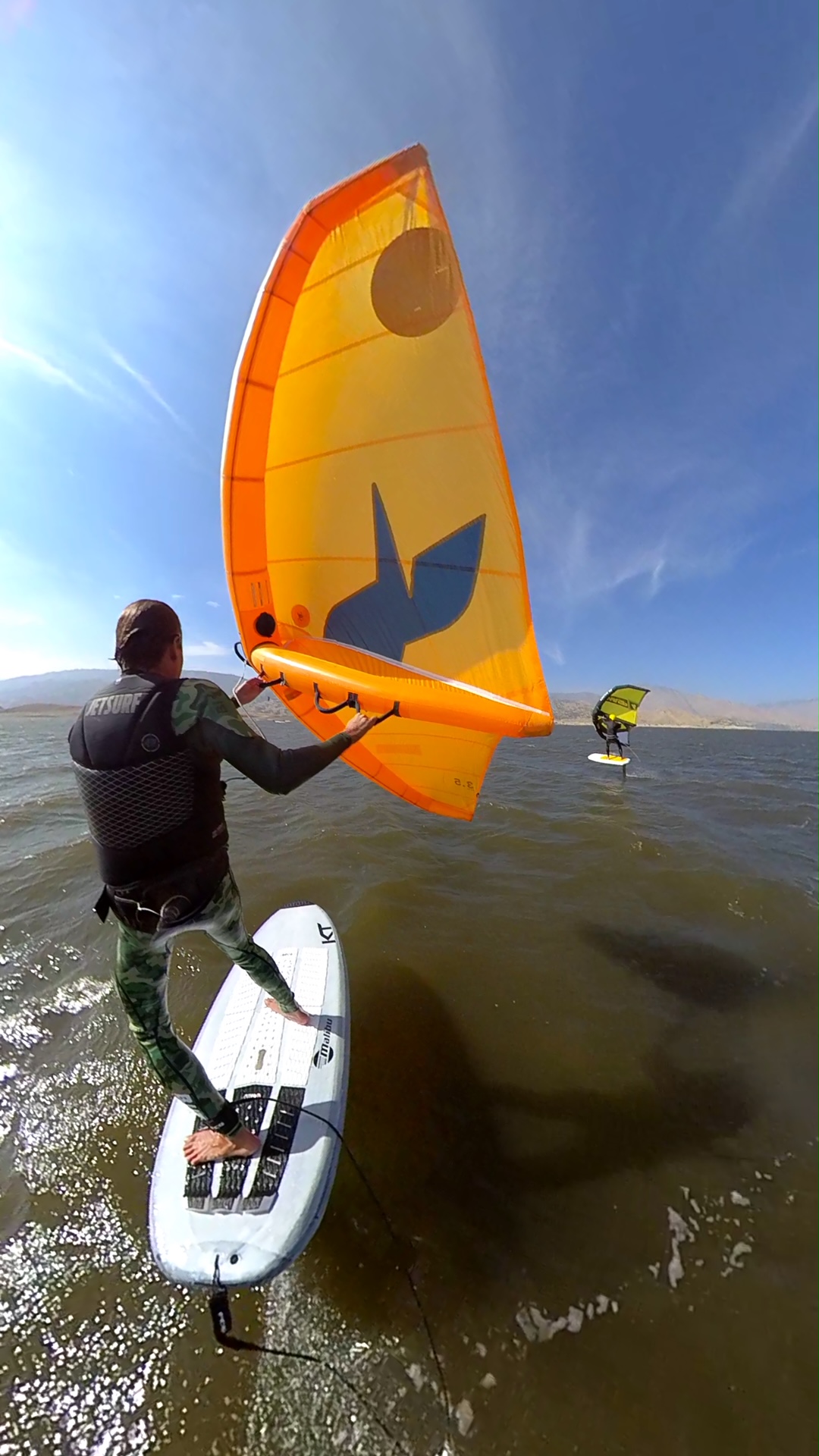 Ari Soffer uses a wing to hydrofoil in Lake Isabella, California. With a wing, you don’t need any waves, you can hydrofoil anywhere there’s water and wind. Photo courtesy of Ari Soffer.

The sport is still very much evolving with new boards, new techniques, and new safety protocols.

Christian Shubin is the owner of Poseidon Paddle and Surf in Santa Monica, one of the only places in Los Angeles that sells hydrofoils. He says injury risk, difficulty, and cost are why he thinks hydrofoiling will remain a niche sport. The gear can run between $2,000-$4,000 to start. But despite all the downsides, ari says it does give the rider one undeniable upside: the feeling of freedom

“It’s the most unbelievable freeing thing. …You can ride for miles. It's the best feeling ever, just being able to get onto a swell and ride from way out in the ocean … for an unlimited amount of time,” says Soffer.

With such an alluring benefit, despite how difficult it may be, Southern Californian is likely to see more hydrofoilers in the near future. 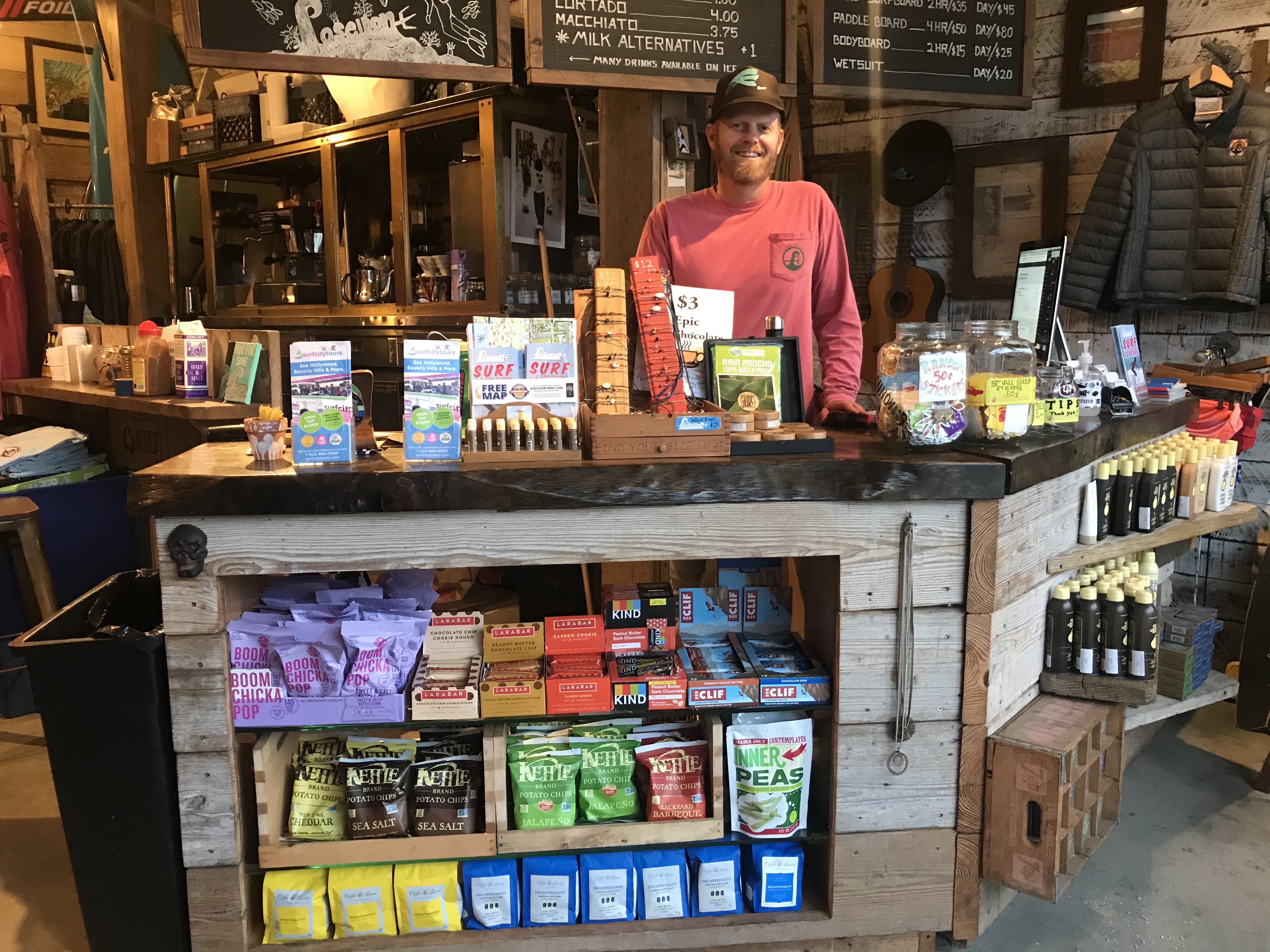 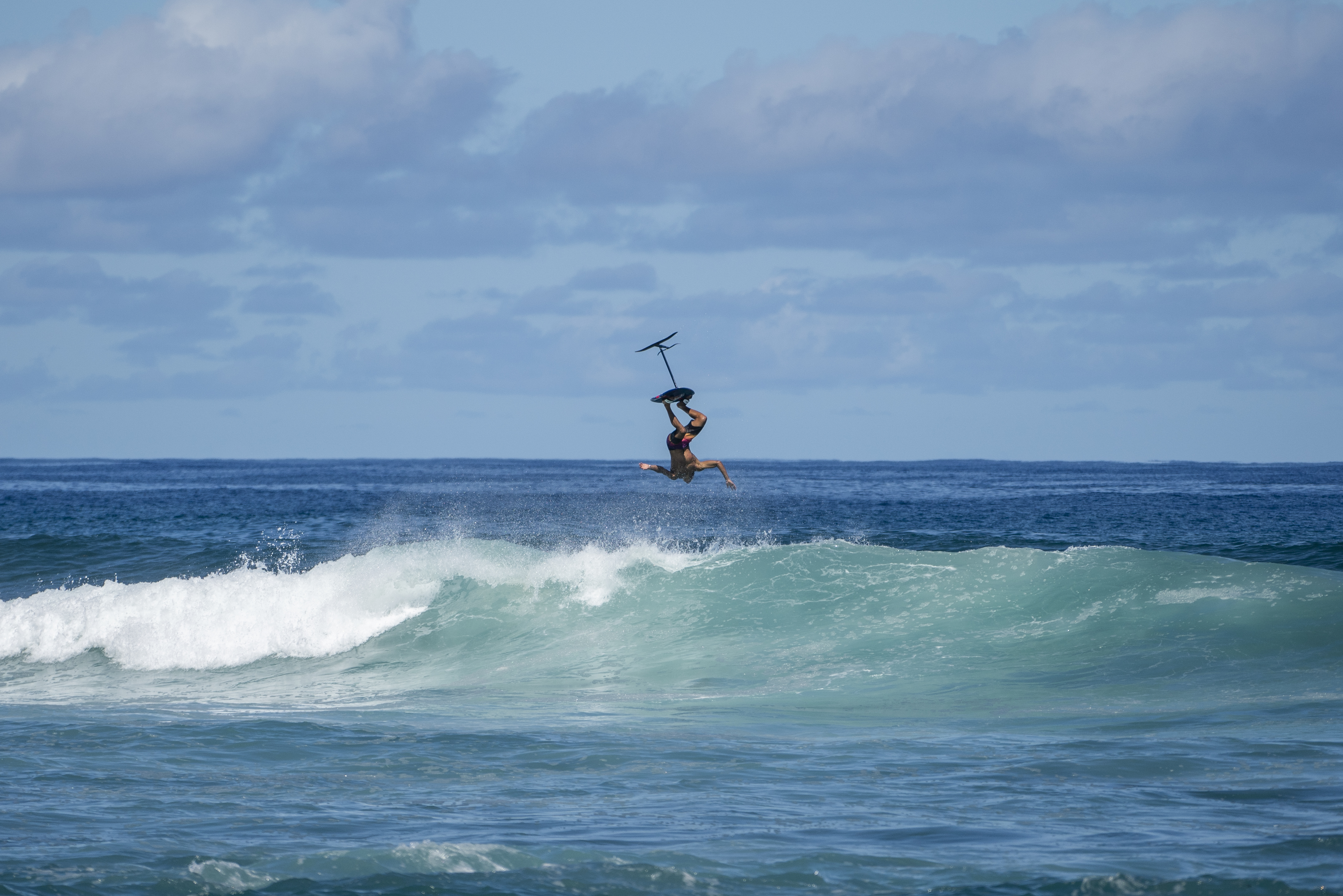 Kai Lenny does a 360 flip in the air in Maui, Hawaii. Photo by Jake Marote/Red Bull Media House.

COVID vaccine: When and how Angelenos get it

Dr. Anthony Fauci said again this week that he expects the “new normal” to be around the corner, with theaters and music venues reopening in the fall.

About three years ago, there were hardly any hydrofoilers in Southern California, but today there are likely hundreds. Still, hydrofoiling isn’t for everyone. It’s difficult...