Day laborers crowd around activists who distribute masks, hand sanitizer and literature about COVID-19 at a Home Depot in Alhambra. Photo by Benjamin Gottlieb.

It has been 15 days since anyone has hired him for a construction job, and he says he is not sure how much longer he can go without being paid.

“I have bills,” he says, standing in the parking lot of a Home Depot in Alhambra, asking customers if they need any construction help. “I need to buy food.”

The home supply store is open. There is a line out the door.

He is one of an estimated 40,000 day laborers who, on any given day in California, are looking for work on street corners, in parking lots, and at hiring centers, according to a survey by the UCLA Labor Occupational Safety program. Like many other professions, day laborers are seeing serious reductions in hours and earnings because of the economic shutdown caused by the novel coronavirus. 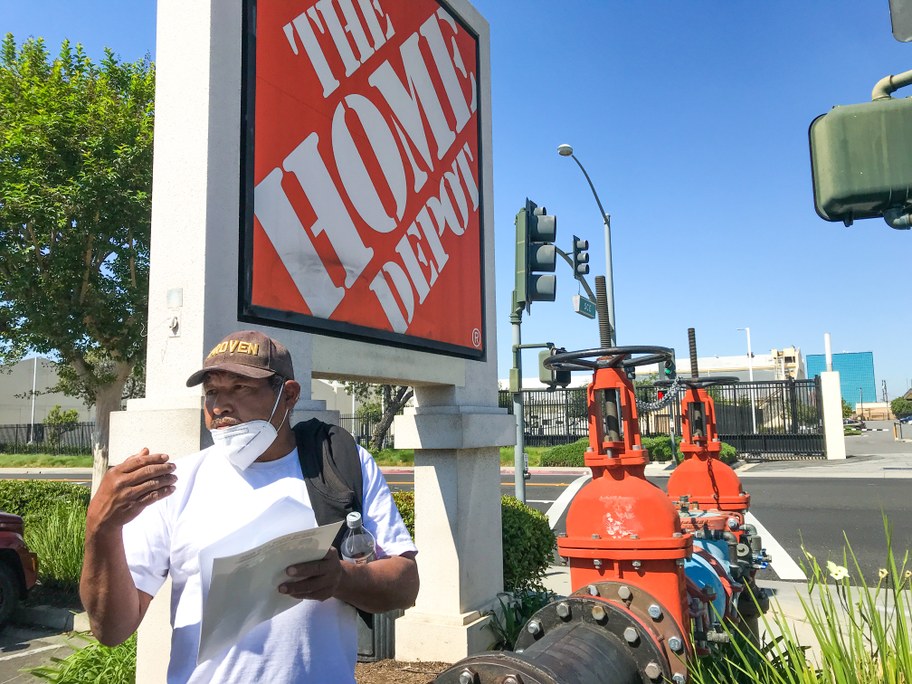 Jesus Gutierrez says he has not worked in weeks. He lives with his wife, son and three grandkids. He says he is not sure how he will pay his bills. Photo by Benjamin Gottlieb.

But unlike most other professions, the majority of these workers lack legal status in the U.S. Their immigration status has created a situation where many feel unsupported by federal, state and local governments.

“Even though construction is going on ... there are a lot of people out of work,” says Bernardo Osario, a volunteer who has teamed up with other organizers to educate day laborers about available benefits and best health practices. “[Homeowners] don’t let you inside. The concern is safety, and right now, nobody wants to take any chances to get infected [with COVID-19].”

About a dozen or so activists met up one recent weekday morning at the Pasadena Job Center. They assembled information packets for day laborers on everything from eviction protections to health recommendations. Medical masks and small cups of hand sanitizer were distributed among the group to be passed out to immigrant workers in the field. 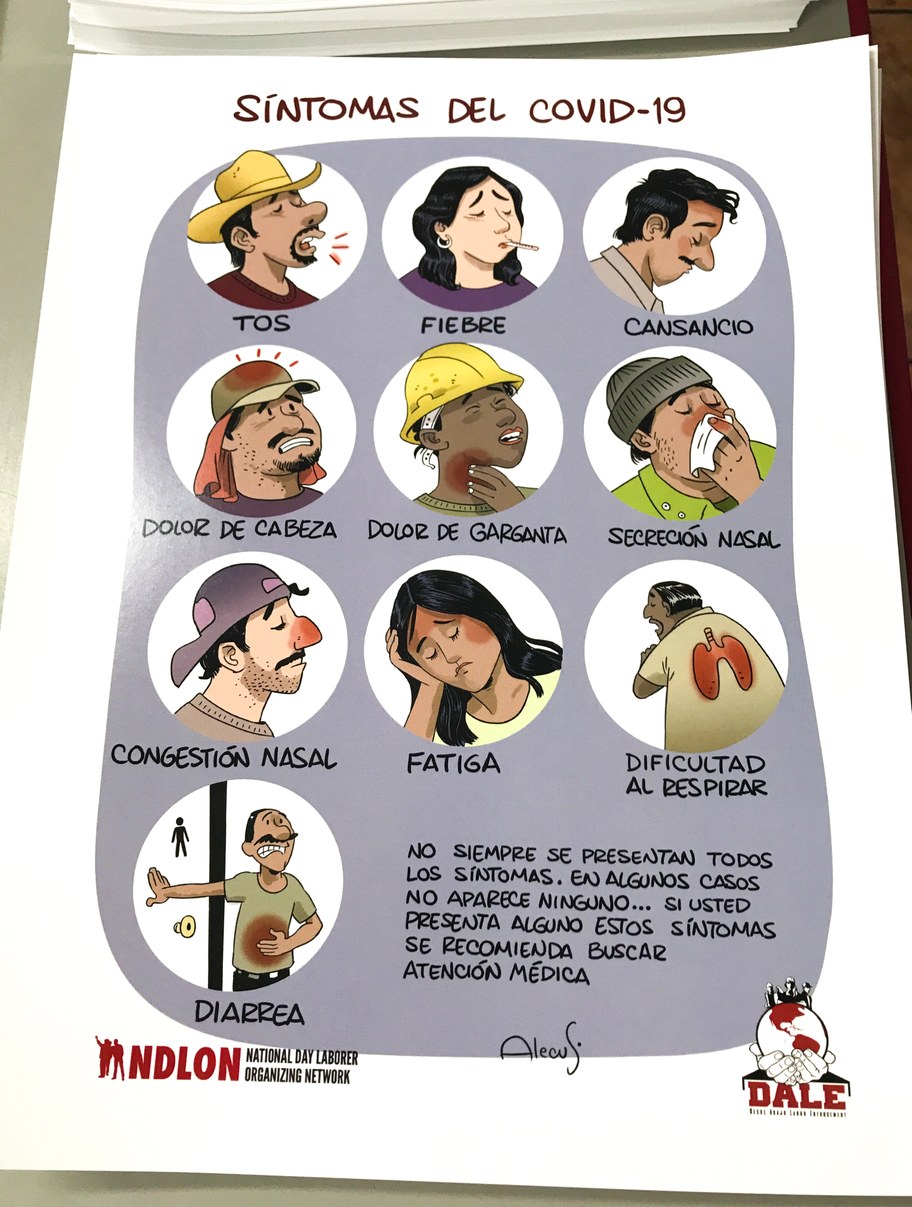 This flier was printed by the National Day Laborer Organizing Network. Activists prepare to pass out information packets about COVID-19 to day laborers in the Pasadena area. Photo by Benjamin Gottlieb.

“We have a health crisis, an economic crisis, a political crisis, and a crisis of people not knowing the laws,” explains Leonardo Vilchis, co-founder of the community nonprofit Union de Vecinos. Because of that, he fears many day laborers will become housing insecure and end up on the streets.

“They don’t know what they can say to their landlords or they’re afraid to do it. That’s why we need to be out here and pass out as much information as possible,” he says.

Vilchis drives around the Pasadena area, stopping at corners and parking lots with day laborers to explain their rights as renters. Governor Gavin Newsom has placed a moratorium on evictions until at least the end of May for workers affected by COVID-19.

Other cities, like Los Angeles, have similar orders on the books. 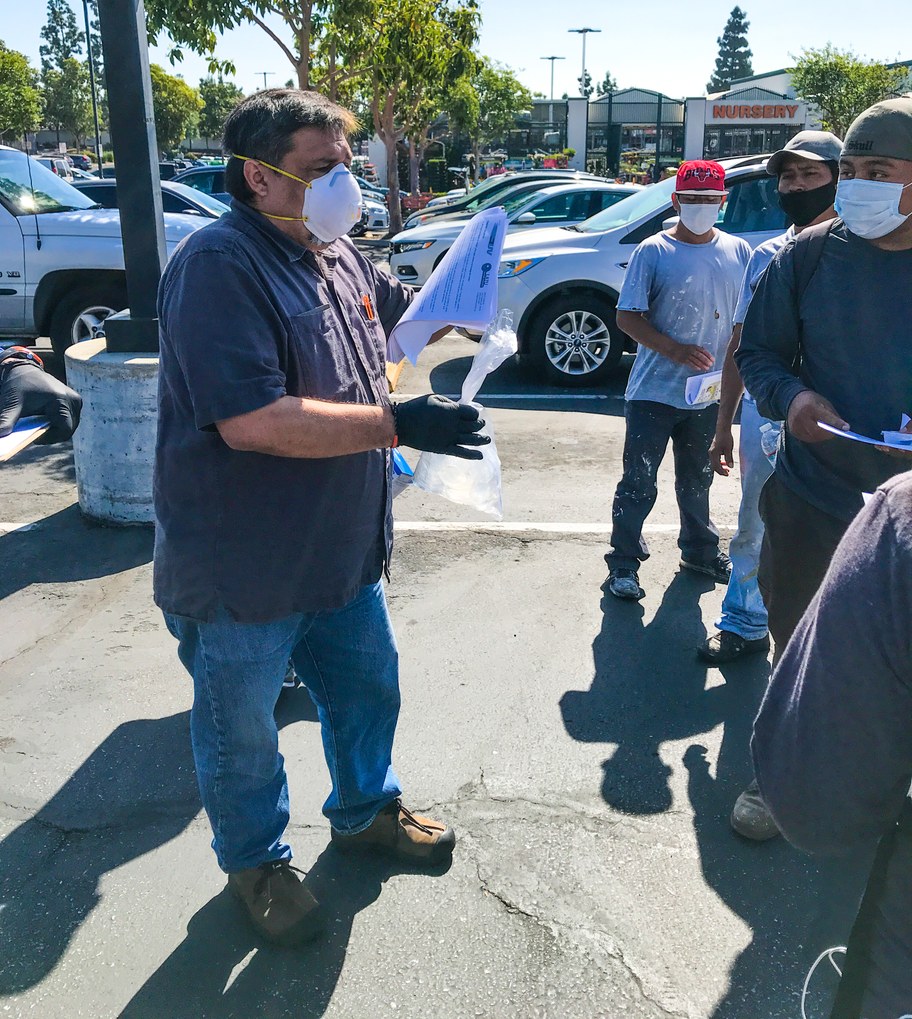 But, Vilchis says, many day laborers are unaware of the protections. Others are afraid to exercise their rights. Making matters worse, immigrants are largely ineligible for government aid, including the federal stimulus checks, even if they pay taxes.

When asked about this earlier this month, President Donald Trump acknowledged the hardships immigrants are facing during the pandemic. But he said citizens need to be helped first.

Gov. Gavin Newsom has faced added pressure to act in the federal government’s absence. He unveiled plans to provide disaster relief to immigrant workers impacted by COVID-19. Under the plan, the state would team up with local nonprofits to distribute aid: $500 for individuals, $1000 for families.

Applications for the money will be available in May.

Even so, many day laborers are skeptical they will receive help. 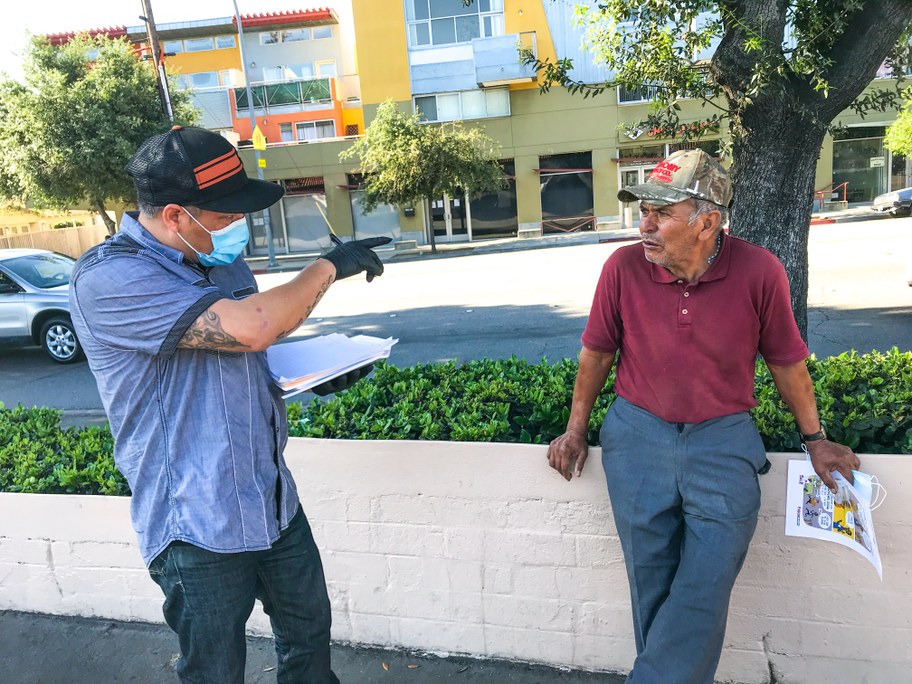 An estimated 40,000 day laborers in California are looking for work every day in parking lots, on street corners, and at hiring centers. Many are feeling the economic...

‘Where are you going to put everybody?’: LAUSD teachers concerned about schools possibly opening in July

This week, Governor Gavin Newsom indicated that students could possibly return to classrooms in July. Some educators are concerned about a summer reopening.

COVID-19 has made it tough to see art in person, and that spells out trouble for art galleries.