Second grade teacher Kari Share says her students love to read outside after a year of virtual instruction. Photo by Caleigh Wells

Reading time for Kari Share’s second grade class at Red Oak Elementary in Ventura County looks a little different this year. One by one, she sits on the ground with each of them, and asks about the plot or helps sound out a tricky word.

But instead of rows of desks, these kids are on a concrete stage outside of their classroom, surrounded by the sound of birds and the rustle of black oak trees. 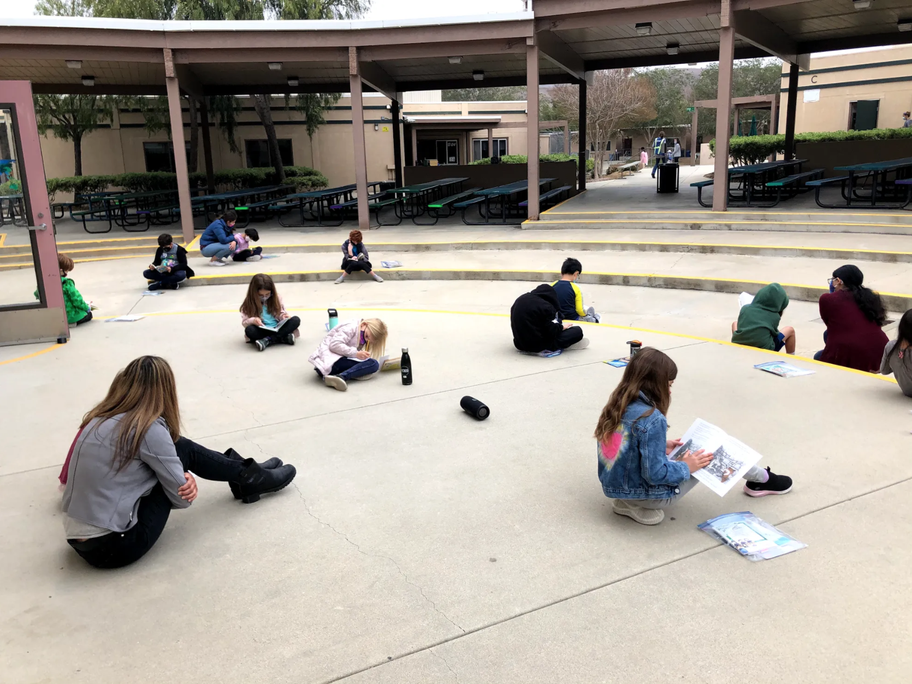 “We've been reading for so long on iPads, so that they actually have books in their hands makes them so happy,” says Share. “Just the fresh air I think gets them excited and just being outside is nice. We get to hear all these wonderful birds and it’s just peaceful.”

Now that kids are back in school, administrators are looking outdoors to find ways to keep students safe. And the kids are thrilled.

“My favorite thing about the school is that the campus is mostly outside,” says second grader Brielle.

“It’s more comfortable than our desk because we stay inside a lot and it’s like really relaxing outside than inside,” says student Aaliyah. 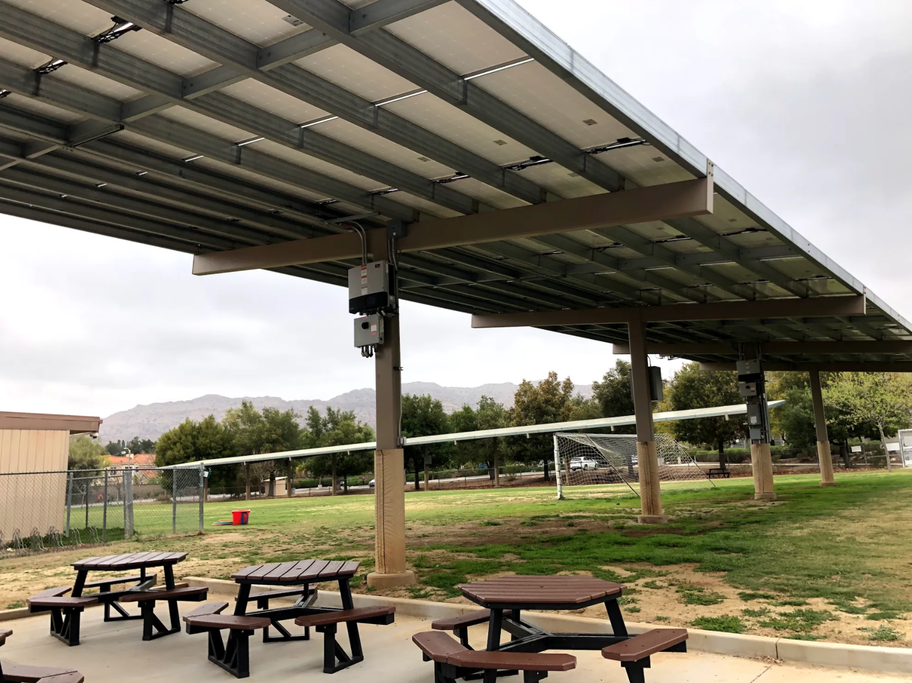 Red Oak Elementary created outdoor learning space by buying tables to put under the solar panel array between the field and the jungle gym. Photo by Caleigh Wells

Those student reviews wouldn’t be surprising to researchers like Professor Marci Raney of Occidental College. She calls the outdoors the optimal learning environment, and she’s glad schools are starting to agree. “We're no longer thinking of learning as being restricted to sitting in desks in rows in a space where there's someone standing at the front of the classroom telling you what to know.”

She says when kids are outside, their stress levels decrease more quickly. She studied kids at two campuses in Eagle Rock, just before the pandemic sent everyone home. One ripped up the asphalt and renovated their grounds, and the other didn’t.

“What we saw … was the [positive] change in their standardized test scores over the time that after the renovations happened,” she says. “We also saw specifically with language arts, a decrease in the achievement gap between the low-income and the non-economically disadvantaged students.”

Fewer kids got sent to the principal’s office. They played more collaborative games instead of competitive ones, and the kids who sat on the sidelines were more likely to jump in.

Before they renovated their campus, the school in that study consulted a California-based nonprofit called Green Schoolyards America. The group helps schools redesign their asphalt school grounds as park-like green spaces to improve student well-being, and improve the environment.

They’ve been around for decades, but Executive Director Sharon Danks says she’s seen 10 times as many schools asking for their help since the pandemic hit.

“Around 15% of the schools had tried at least one outdoor classroom on their own grounds. … And then when the pandemic hit, we started getting inquiries from the other 85% that had never tried it but could see that this was a way for more space or fresher air or other resources that they could use in the pandemic,” she says.

Red Oak Elementary in the Oak Park School District is part of that 85%.  It’s in a suburban neighborhood just north of the Ventura County line, where grass and square footage abound. Creating outdoor classrooms was a matter of buying new tables to put under the solar panel array between the soccer field and the jungle gym, or putting pavers in the shade of one of the school’s 87 trees. The state and federal COVID funding more than covered all that. 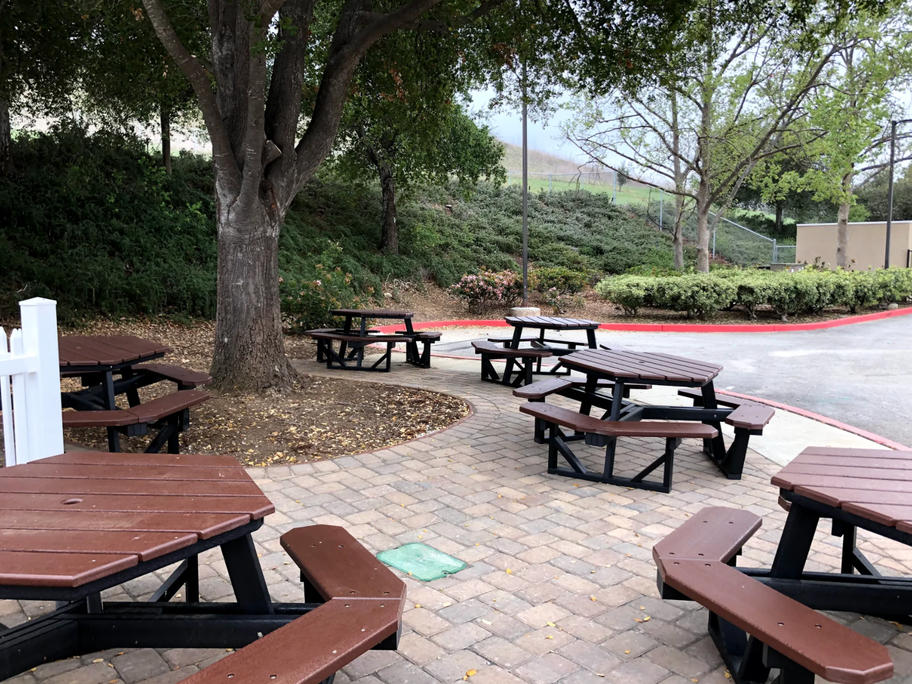 It’s a different story at Kingsley Elementary in Little Armenia. The sound of birds is accompanied by the consistent drone of the nearby 101 freeway.

“As you can see our campus is mostly asphalt,” says principal Karina Salazar. “Part of this project is about creating more opportunities for students to have shade, to be able to work outdoors, and to have more green so it’s part of creating more green spaces on the campus.” 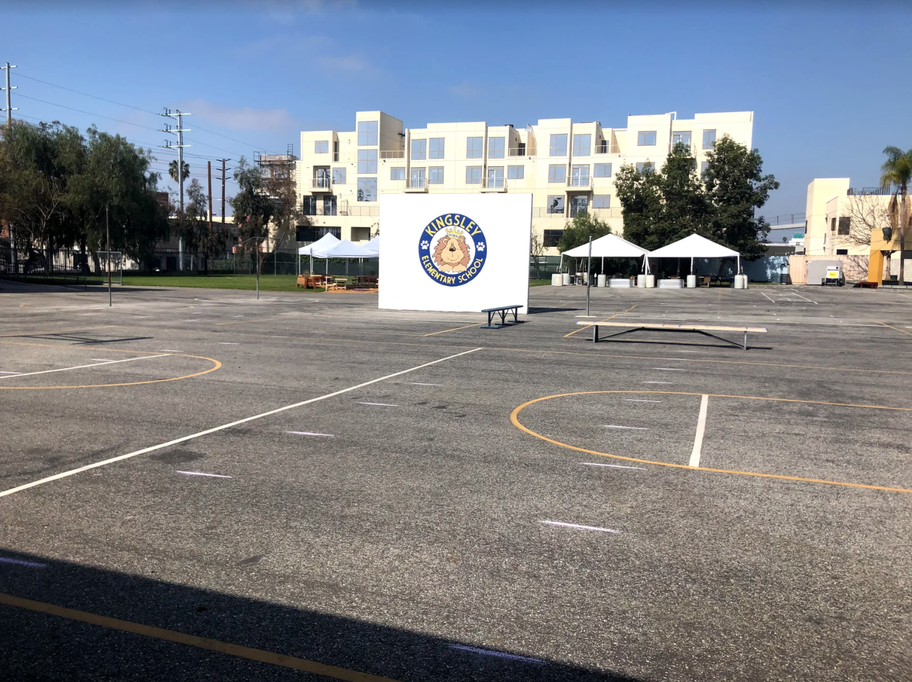 The outdoor classrooms at Kingsley Elementary are under the tents at the back of the mostly asphalt schoolyard. Photo by Caleigh Wells

The grass field is about a quarter of the size of the one at Red Oak. There are a few trees around the perimeter, but most of the playground is in direct sunlight, and almost every square inch of the campus already serves a purpose.

And yet, the school created four outdoor classrooms that sit on what was part of the schoolyard. They set aside $15,000 and managed to finish under budget by being clever, thrifty and resourceful. 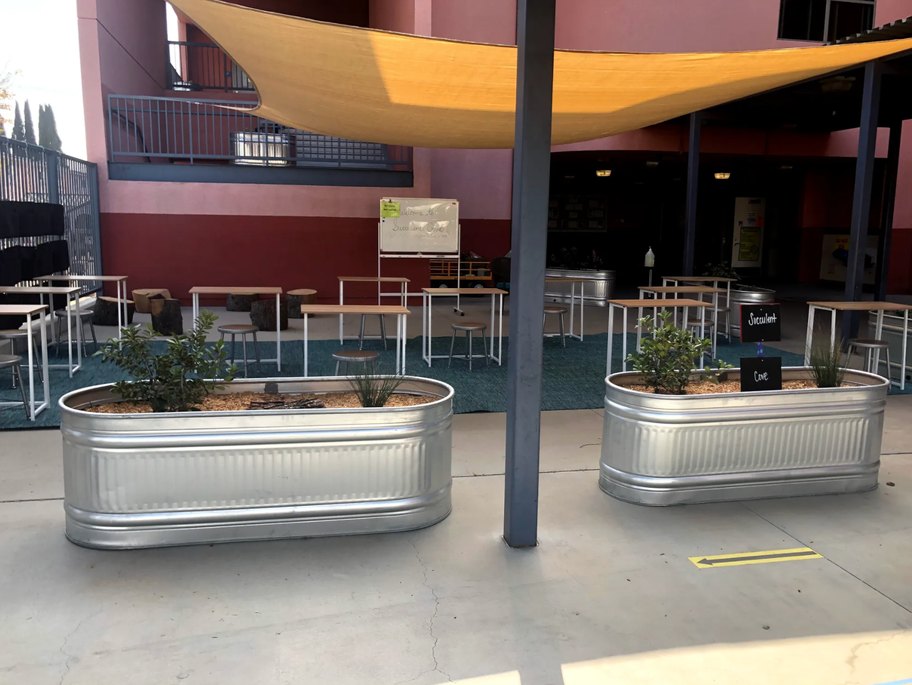 Kingsley Elementary uses a shade sail over an outdoor classroom to protect students from direct sunlight. Photo by Caleigh Wells

One of the teacher’s dads hand-made a dozen wooden desks for one of the classrooms. A local nursery donated tree stumps for a nearby reading area. LAUSD bought most of the tents that shade the classrooms as a COVID safety measure. And the planters that, when fully grown, will serve as nature walls, were assembled by volunteers. 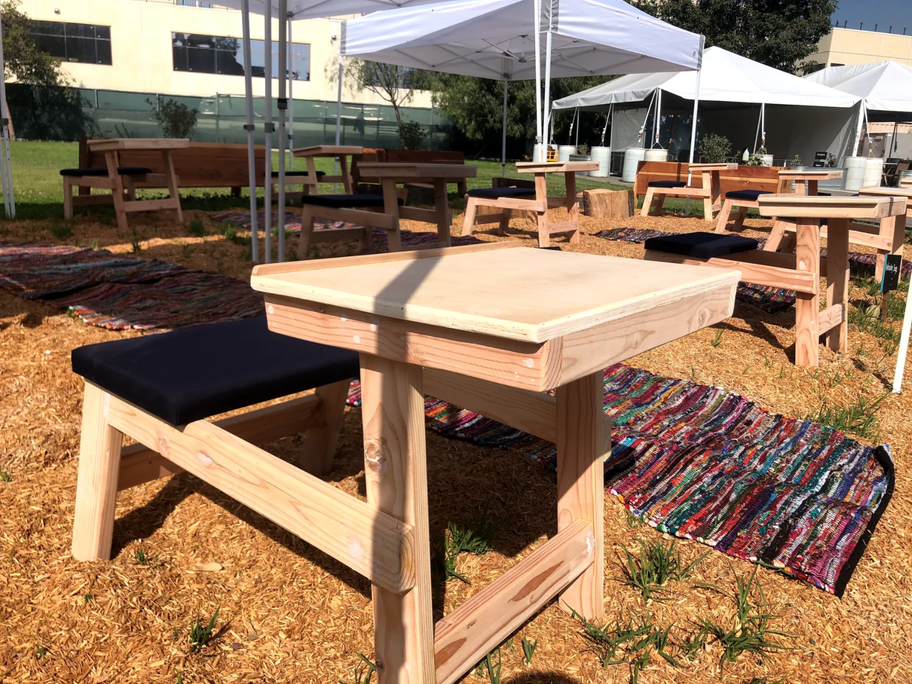 The 20” x 30” “woody mulch” classroom was carved out of the grass field on the schoolyard. Photo by Caleigh Wells

Salazar says teachers reserve the outdoor classrooms for their kids, and already all four “rooms” are fully booked for the rest of the school year.

“There was an overwhelming response that they were in favor of using this type of tool,” she says. “Of all the teachers that expressed an interest being outdoors, more than half of them wanted to be out here more than half the day.” 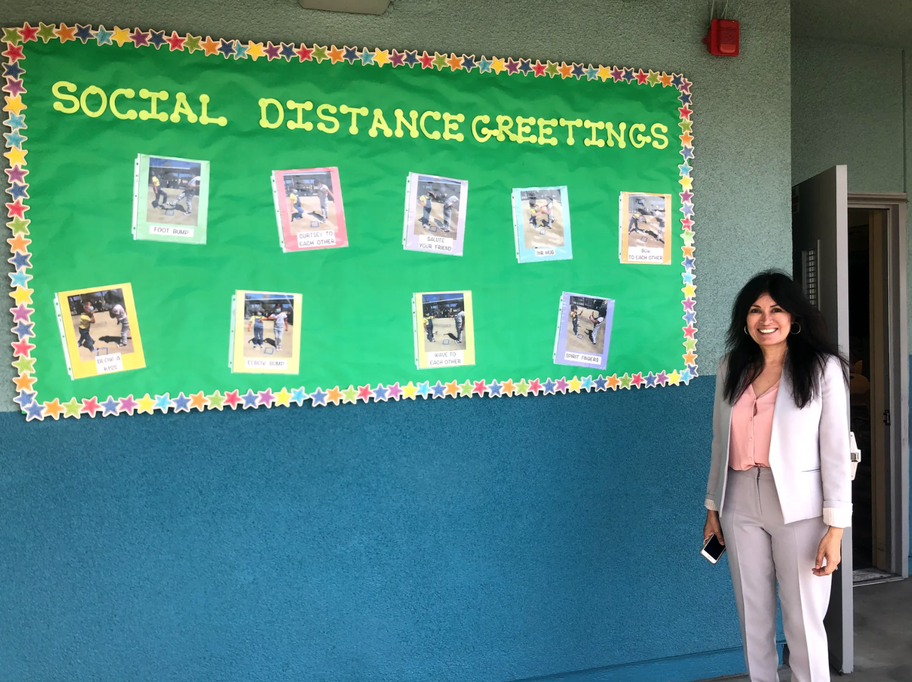 Principal Karina Salazar stands next to a bulletin board showing socially distanced greetings on the first day of school. Photo by Caleigh Wells

The principals at Red Oak and Kingsley both say what started as a COVID safety measure will likely be a permanent addition to the campus. The next step at Red Oak is designing new classroom buildings with sliding doors that open into outdoor learning spaces. For Kingsley, it’s taking out some of the asphalt schoolyard and replacing it with something greener.

Now that kids are back on campus, teachers are bringing lessons outside to keep them safe. The health benefits for students extend far beyond COVID safety.

On Monday, the Los Angeles Public Library will begin limited in-person services at the Central Library and 37 branches across the city.

"It really is special, being African American and playing a predominantly white sport because I'm able to represent a community," says Max Irving.