The entrance to Culver City’s Ralphs supermarket, with customers waiting in line to get inside, March 18, 2020. Photo by Amy Ta.

Remember what going to the grocery store used to be like, back in the old days of … just a couple weeks ago? COVID-19 has given us a new reality.

“As soon as we open, everybody busts through the door,” says Danny Morales, a grocery clerk at Ralphs in West LA. “You know, no regard for nobody. Everybody for themselves.”

Morales has been with the grocery chain for four months, working mostly through the holiday season. He’s never seen the store this busy. 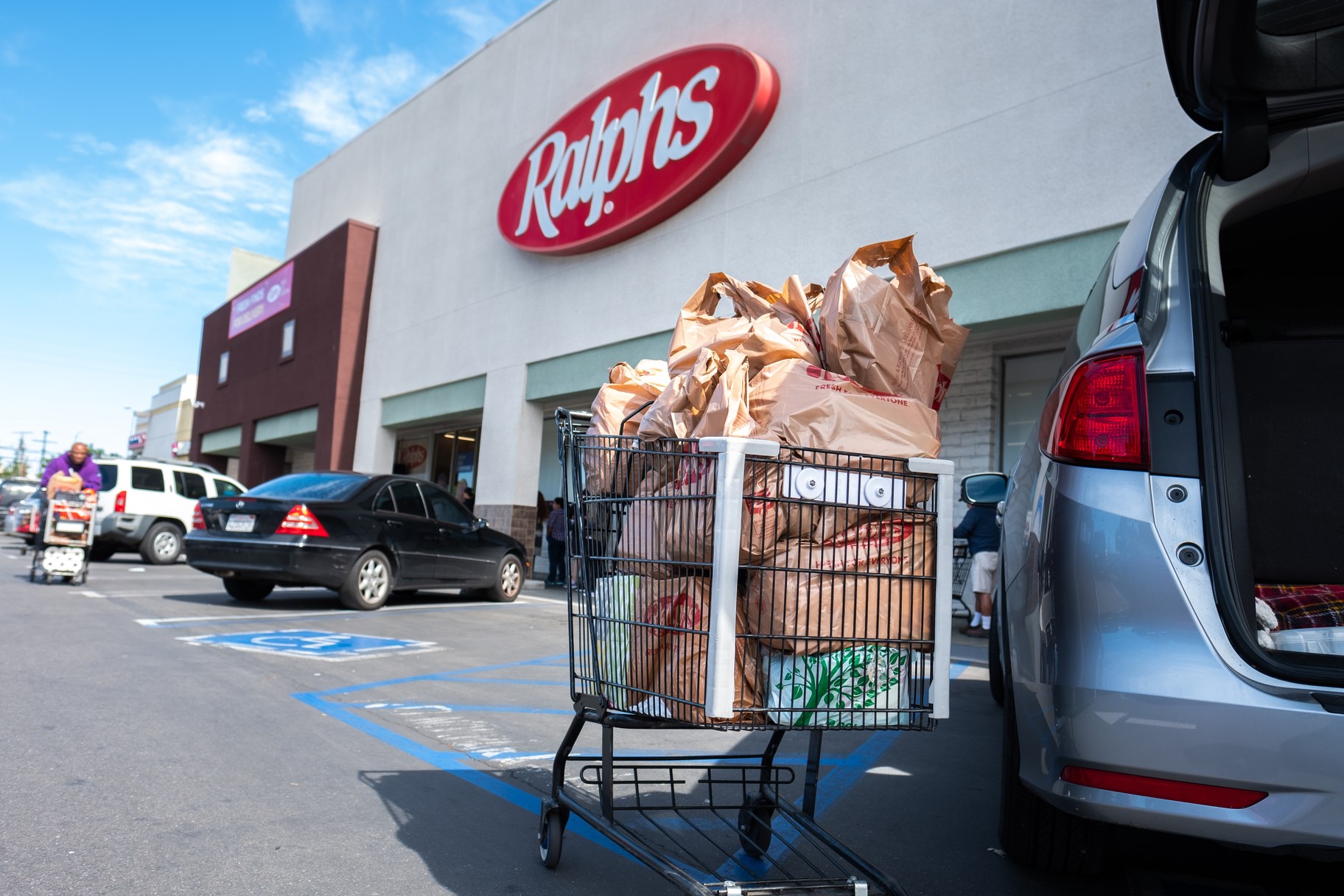 A loaded grocery cart outside of Culver City’s Ralphs supermarket, where customers wait in line to get inside, March 18, 2020. Photo by Amy Ta.

She says, “You could see it on a week by week basis. The first initial people are making jokes or laughing, ‘Oh, this isn't a big deal.’ And then you start seeing people with face masks. Then you see people starting to go, ‘Don't touch me, stay six feet away from me.’ So it's just progressing more and more, where people are taking it more seriously or reacting more seriously towards it.”

She says customers' attitudes started to mentally affect her: “You hear customers yelling at each other like, ‘Keep a distance from me!’ And it starts to have an impact on you mentally, whether you want it to or not. Anxiety is getting a little bit heavier, but we've been cleaning a lot more to kind of keep that down.” 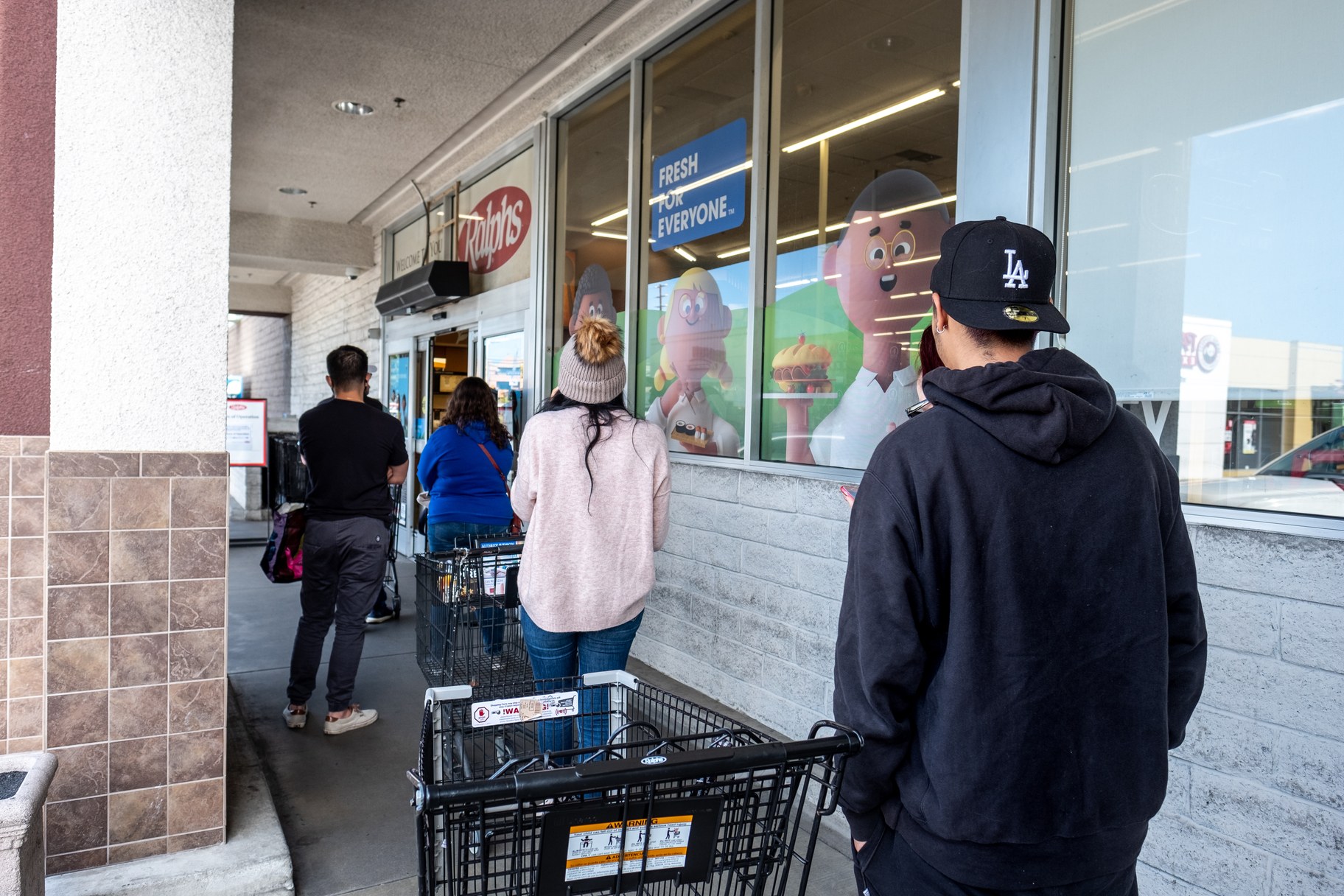 Near the front of the line to get inside Ralphs supermarket in Culver City, March 18, 2020. Photo by Amy Ta. 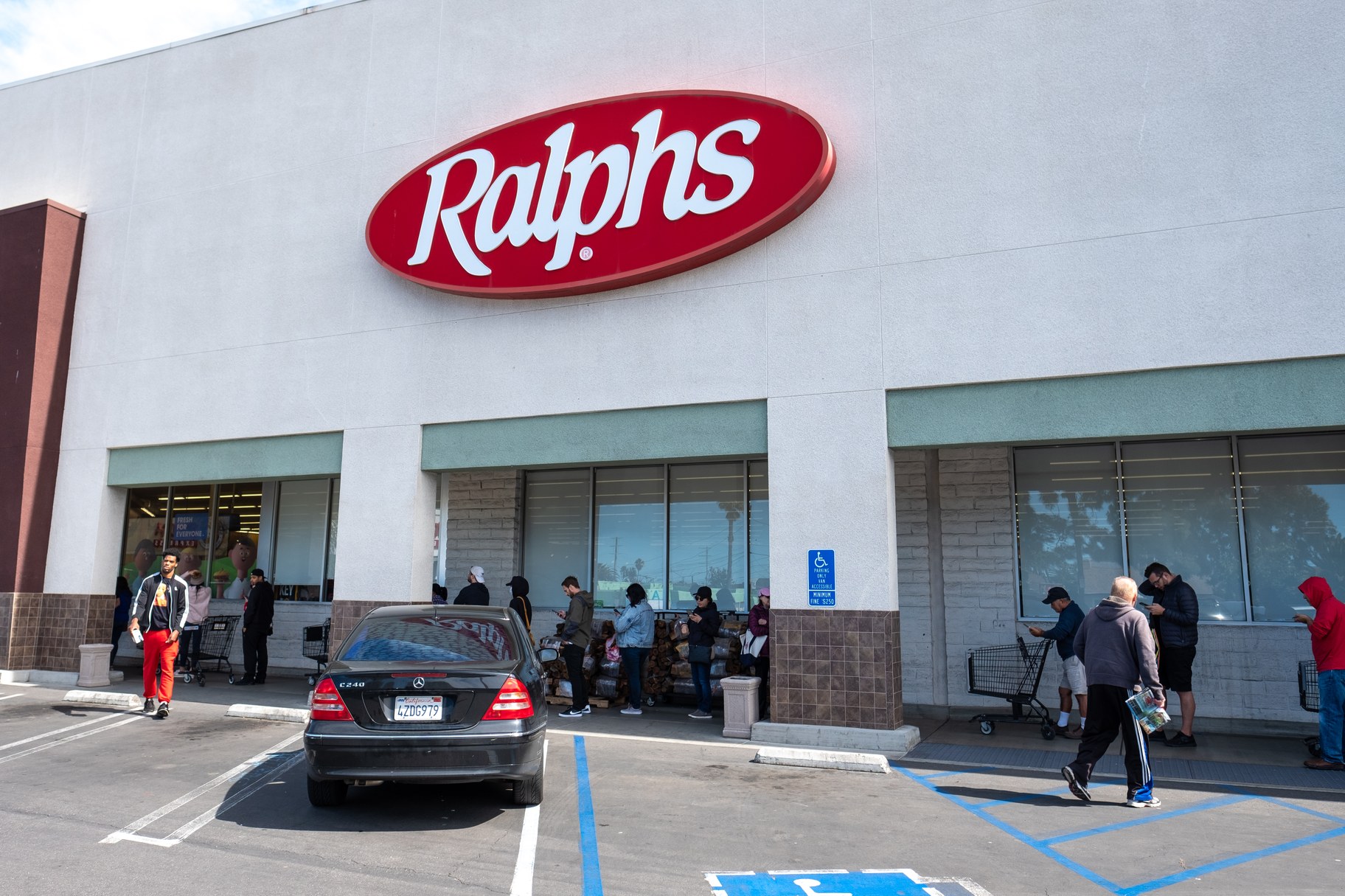 Customers wait in line to get inside Ralphs supermarket in Culver City, March 18, 2020. Photo by Amy Ta.

But the situation is slowly improving, she says.

“It's starting to get a lot more civilized in the stores. You have a limit to how many things you can buy. There's a limit to how many people could be in the store at certain hours. … There's time for us to get things back on the shelves. … Stores and companies are working together to make sure there isn't mass panic going on.”

What surprisingly doesn’t make her anxious is the possible exposure to COVID-19. Grocery store employees are interacting with people more than nearly anyone else except health care workers these days.

“I'm sure each clerk has sanitizer that is readily available for them. We have hot water upstairs that we can use to wash our hands. We've all been pretty good about that in the past because you have to go through training on that. It's just nice to see it being reinforced not just for us, but on a global scale, at this point,” she says. 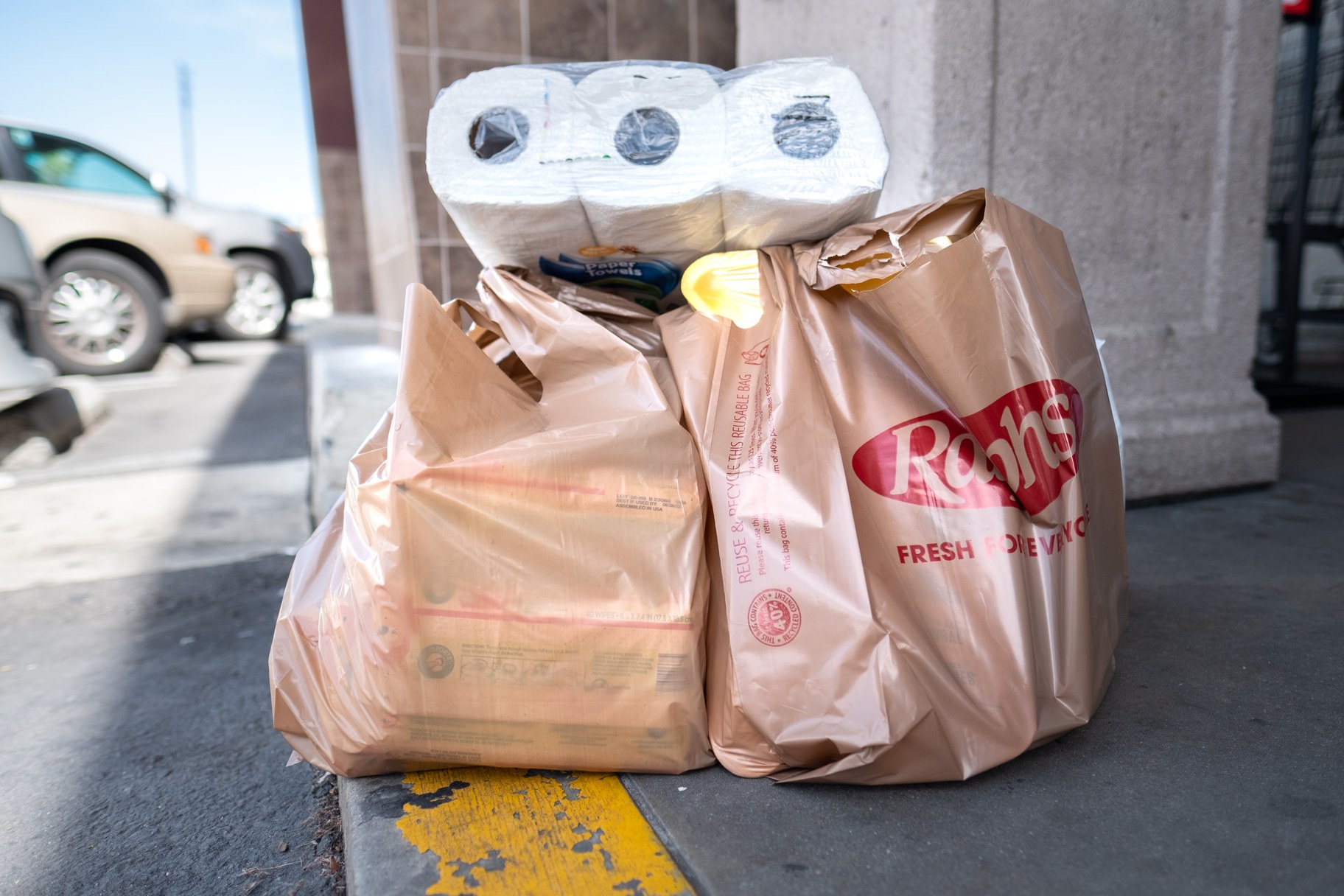 At Erewhon Market in Venice, cashier Susan Salkeld has come to accept the situation.

Salkeld started at the store in August. She’s adjusting to the new normal.

“It was the line that never went down. Just the bagging, and the cans, and the produce -- it was overwhelming. You would see these giant scary carts,” she describes.

Despite this, she’s enjoyed helping people during this pandemic way of life. In fact, it’s given her something to look forward to.

“I was getting to that point where I was feeling really tired. And then it just gives me a purpose, I guess, to go to work. It's not just that hourly job trying to get through the day anymore. So now, I'm more excited about it. And that's what's been getting me through it.”

One small chain of grocery stores, Vallarta Supermarkets, is trying to adapt to the new normal. They are hiring more employees to help restock shelves and are assuring customers that food and household items won't run out, more shipments are coming.

To help the most vulnerable population, they have started a new initiative. Vallarta Supermarkets will open early exclusively for seniors, 65+ years of age or older, pregnant women and those with disabilities from 7:00am-8:00am before opening to the rest of the public. Across all of its 50 locations in California.

Remember what going to the grocery store used to be like, back in the old days of … just a couple weeks ago? COVID-19 has given us a new reality.

No traffic, most people at home. Does coronavirus help with air pollution?

COVID-19 means people are stuck at home, kids are out of school, many are anxious about getting sick and whether the health care system can keep up.

Now that many of us are working from home or staying home from school due to coronavirus, your routine has likely changed.