The Bobcat Fire destroyed 17 of the 81 historic cabins in Big Santa Anita Canyon, including this one. Photo by Susan Valot for KCRW.

Before the Bobcat Fire ripped through the San Gabriel Mountains in September, Big Santa Anita Canyon, with its lush creek and shady live oaks, was an idyllic getaway for thousands of Southern California locals.

The lucky ones owned one of the 81 historic cabins here, on land rented in 20-year increments from the U.S. Forest Service. They cannot live in them full-time and they cannot rent them out, but they can hike in to enjoy the escape from city life.

The Bobcat Fire destroyed nearly 115,000 acres, making it one of the largest wildfires in LA County history and taking 17 cabins with it. Only 64 remain, a remnant of the Great Hiking Era, which stretched from the 1880s into the 1930s.

That was when the likes of John Muir trekked through these steep mountains. In that time, people built these little cabins along the trails as a way to get away from LA, only 15 miles away as the crow flies.

Adams’ Pack Station, built in 1936, is at the heart of this area. Cabin owners pop in to say hello. Hikers stop by to get passes for being in the forest.

“When people came up, they’d come, they’d have a burger, they’d sit down on the deck and have a beer … or cold drink. We had sold ice cream and sandwiches,” said Maggie Moran, who bought and took over the pack station in December 2019. “It was a great place to still be in the mountain after your hike. You didn’t have to just get in your car and leave.” 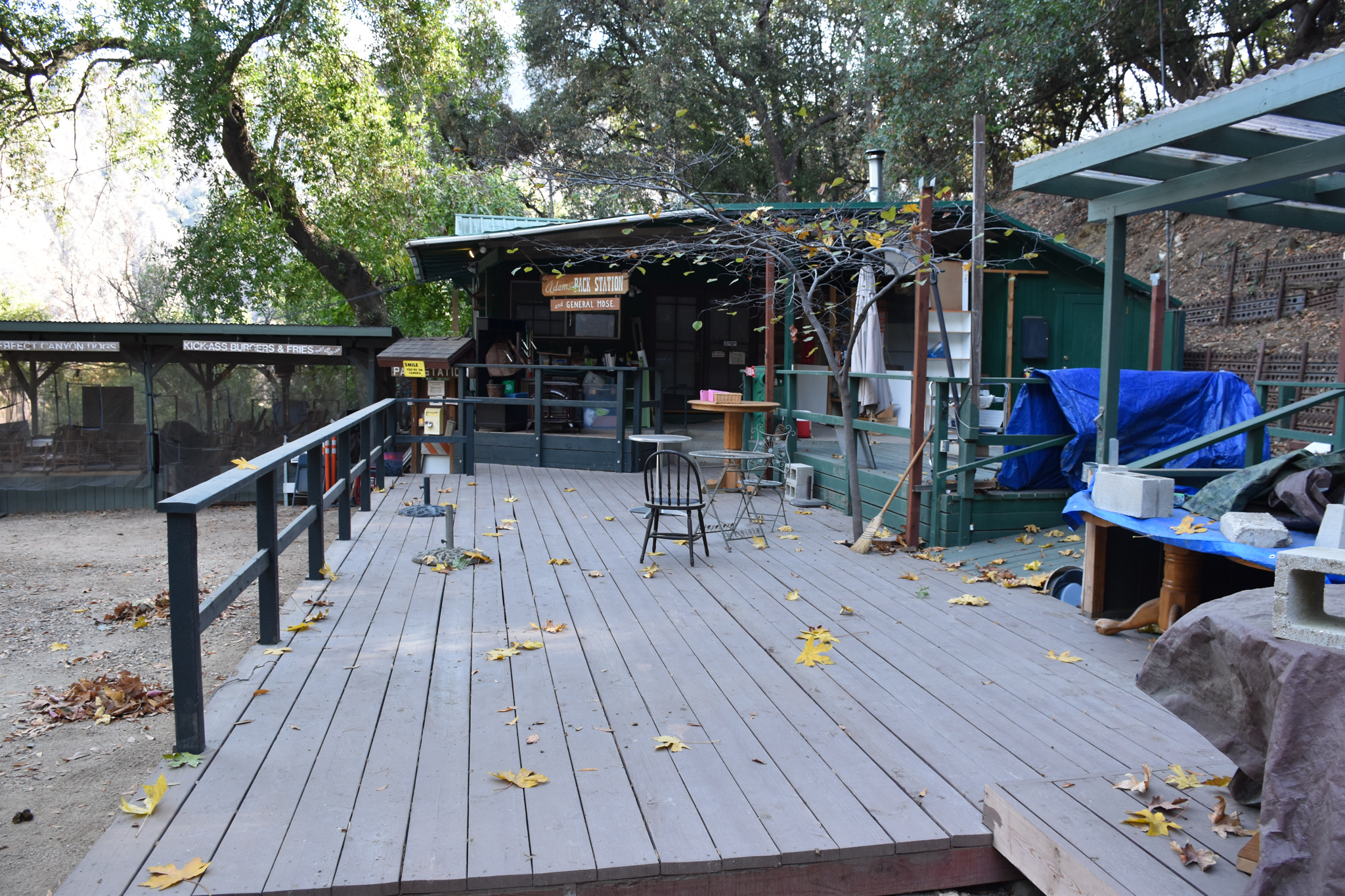 The deck at the historic Adams’ Pack Station is usually filled with hungry and thirsty hikers, but business here is expected to be slow until April 2022, when the forest in the burn area is scheduled to reopen. Photo by Susan Valot for KCRW.

Moran was forced to evacuate herself and her donkeys, which are normally hired out to carry in groceries, supplies and building materials for cabin owners and those who don’t want to trek in gear to the historic Sturtevant Camp about four miles up the canyon.

“It was scary because I live here and all of my belongings were here. So I thought we were going to lose the business, home, everything. And it survived,” Moran said. “And then I immediately felt like, ‘Oh my gosh, what is a pack station without cabins?’ And we didn’t know if any cabins would survive. ... Without them, I’m nothing. Without us, it’s very difficult for them.” 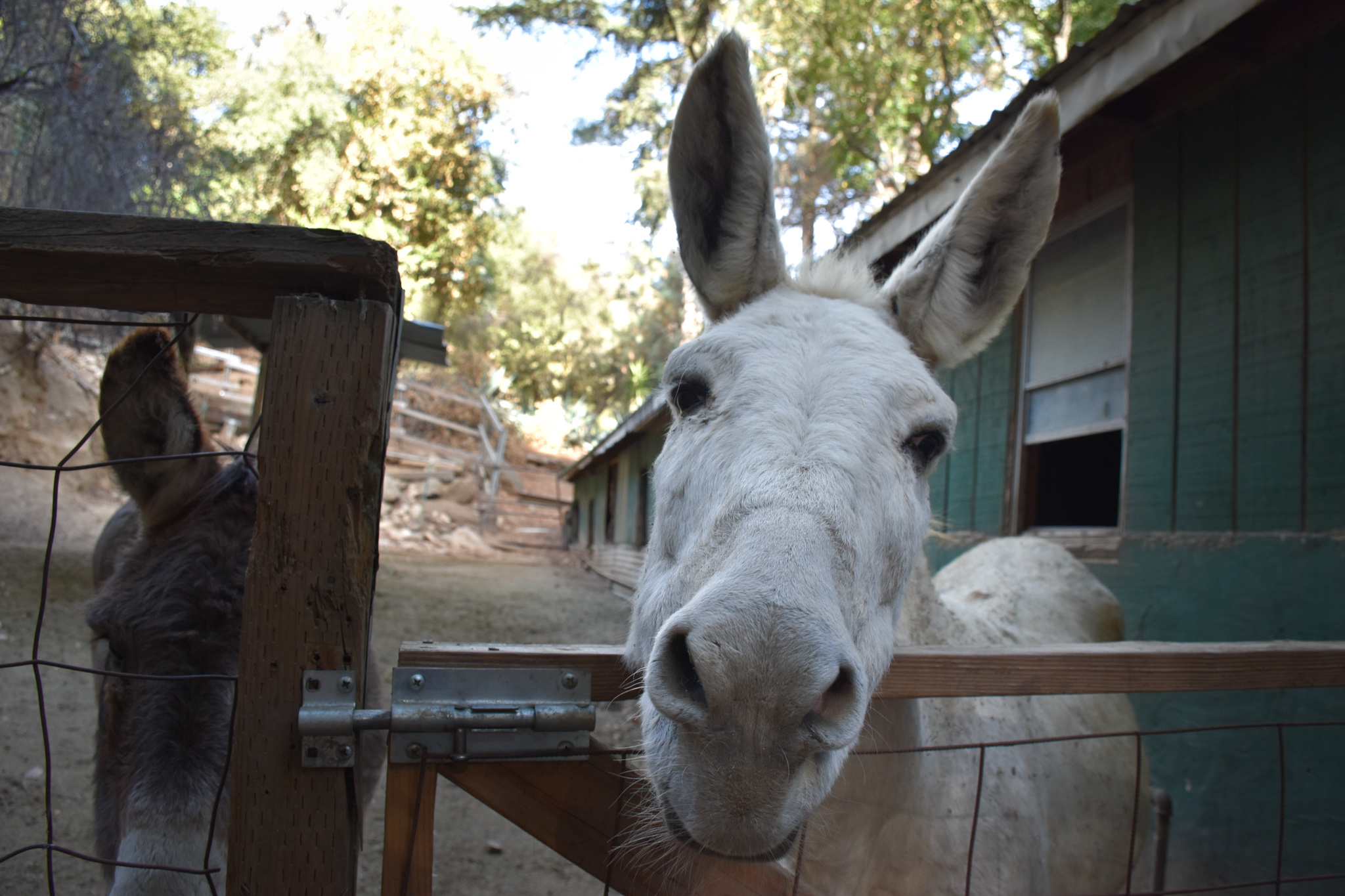 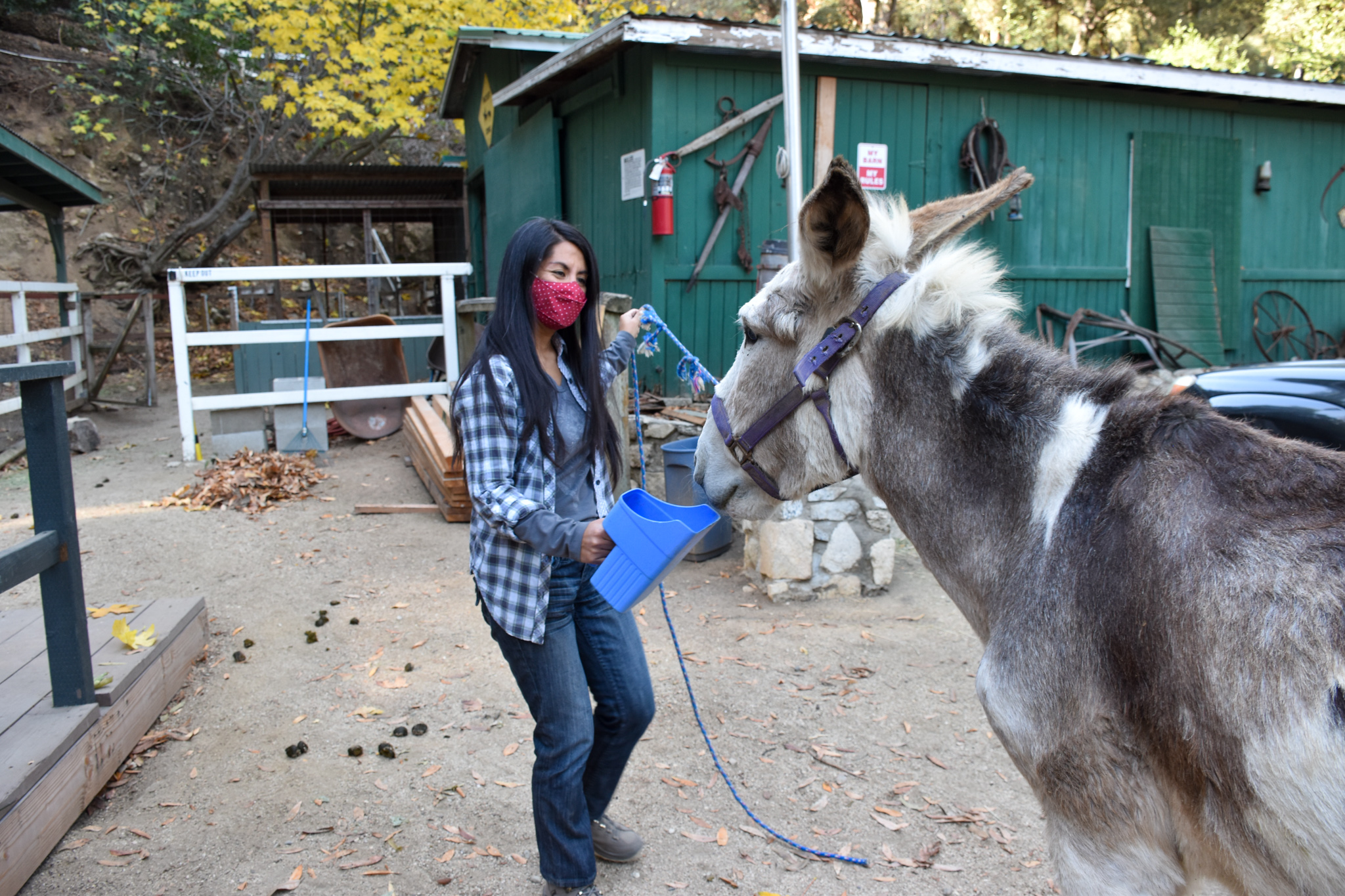 Adams’ Pack Station owner Maggie Moran coaxes Calico to the barn with some food. Moran and her donkeys had to evacuate because of the Bobcat Fire and now must wait for business to pick up until the forest here reopens in April 2022. Photo by Susan Valot for KCRW.

Now, the forest in the burn area is closed, but when it’s safe, the cabin owners are being allowed in during the day. Moran has started a GoFundMe campaign to get by until the forest reopens.

“There’s a saying on the pack station website back when we bought our cabin, just kind of describing what this place is. It’s not Big Bear. It’s not Arrowhead. Don’t come up here if you’re a hermit. Your fellow cabin owners will get to know you. They’ll recognize your car in the parking lot. However, they will also take the shirt off their back to help you. And that’s been so true,” said Bambi Hale, whose cabin survived.

Looking down into the canyon, you can see green trees along the creek, but beyond, the mountainsides are that familiar black moonscape with the skeletons of bushes and vegetation. Green roofs of some cabins that made it peek through the now-open vegetation. You pass a former resort from this area’s heyday. A stone staircase leads to a lodge that was gone long before this fire. An untouched bridge crosses over a stream.

Then around the bend, a dark green cabin that survived sits at the base of a steep blackened embankment. High above rests a row of stone and a beautiful stone fireplace tucked behind. The walls and everything else are gone.

This is Cabin 25, belonging to Ben Lambert.

It was his pride and joy, which he bought 25 years ago and spent that time fixing it. Ben Lambert bought his cabin 25 years ago. The Bobcat Fire destroyed it, leaving only the fireplace standing. Lambert has been laying down material in hopes that it will help keep the land in place during winter rains. Photo by Susan Valot for KCRW.

Lambert picks through the pile, pointing out a bent metal chair and other stuff he can’t even recognize. He said after the fire, he found glass icicles  dripping off the fireplace mantle.

Lambert said he’d just finished framing and painting windows that he’d hauled to the cabin and left sitting on the floor, ready to install. He said there’s no sign of them.

“It was like a nuclear bomb blast or ray gun [went off],” Lambert said.

Lambert said initially there was confusion after the fire went through, about whether the cabins survived. But then someone showed him a photo of the ruins of his cabin. So he said he was ready for it when he first was able to hike in after the fire.“For me it was coming around the corner and seeing that whole moonscape of that mountainside, you know, when you’re walking down in here … [it] was more … the gut punch,” Lambert said.

Lambert said he’d joke that he was drunk for a month, dealing with the loss, but he said there’s some truth to that.

“It’s a mourning,” Lambert said. “If I were to describe it, it’s like a family member dying.” 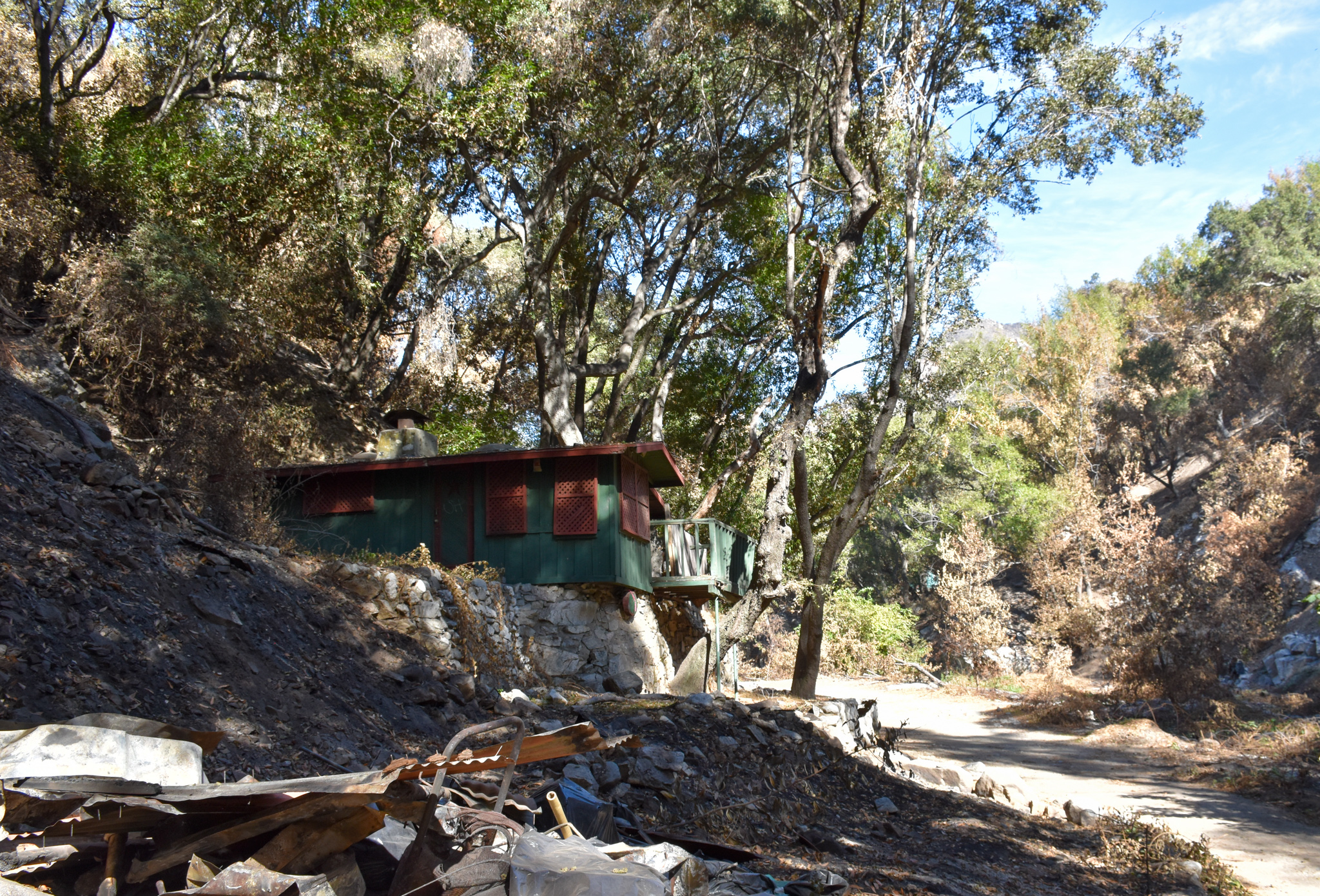 The debris pile at the bottom of the photo is all that is left of Ben Lambert’s cabin, which was destroyed by the Bobcat Fire. The cabin next door, pictured here, survived. Photo by Susan Valot for KCRW.

Cabin owners say it’s like losing a piece of something that connects you to the past.

“I think of it like living history,” Hale said. “It’s a pretty rich tradition. These are built 100 years ago, which in LA terms is such a rarity. … I remember hearing one cabin owner during that week that we were waiting anxiously, I remember her saying, ‘You know, I’d rather my house in the city burn down than my cabin, just because, you know, a house is a house.’ I guess, you know, for a lot of people you need it, it’s a necessity in life, but this is really where our souls live.”

Lambert hopes to rebuild, but the Forest Service has not decided yet on that. It wants to see what the winter rains and likely mud will do.

A little ways up the trail, Ruth and John Wood’s cabin made it. Their deck overlooks a cabin that is now in ruins, with its owners yet to visit.

Decades ago, this place was part of a Girl Scout camp where Ruth stayed as a girl. John says they were drawn back to this area by the small-town feel.

“You can’t walk anywhere without bumping into a neighbor. And canyon etiquette is that if you know someone is in, you just go over and knock on the door and say hello,” John Wood said. “Typically, we will come in on a Friday night and you literally set your mental burden down from the week and it’s gone. And you don’t think about it for a day and a half because we usually would spend two nights here. And there’s no replacing that just break with COVID, the break with crazy politics. It just goes away and …  life becomes very simple and very basic. And that’s so wonderful and it’s so different from our other life. And I think we’re not alone in that and that’s why people are so attached.” 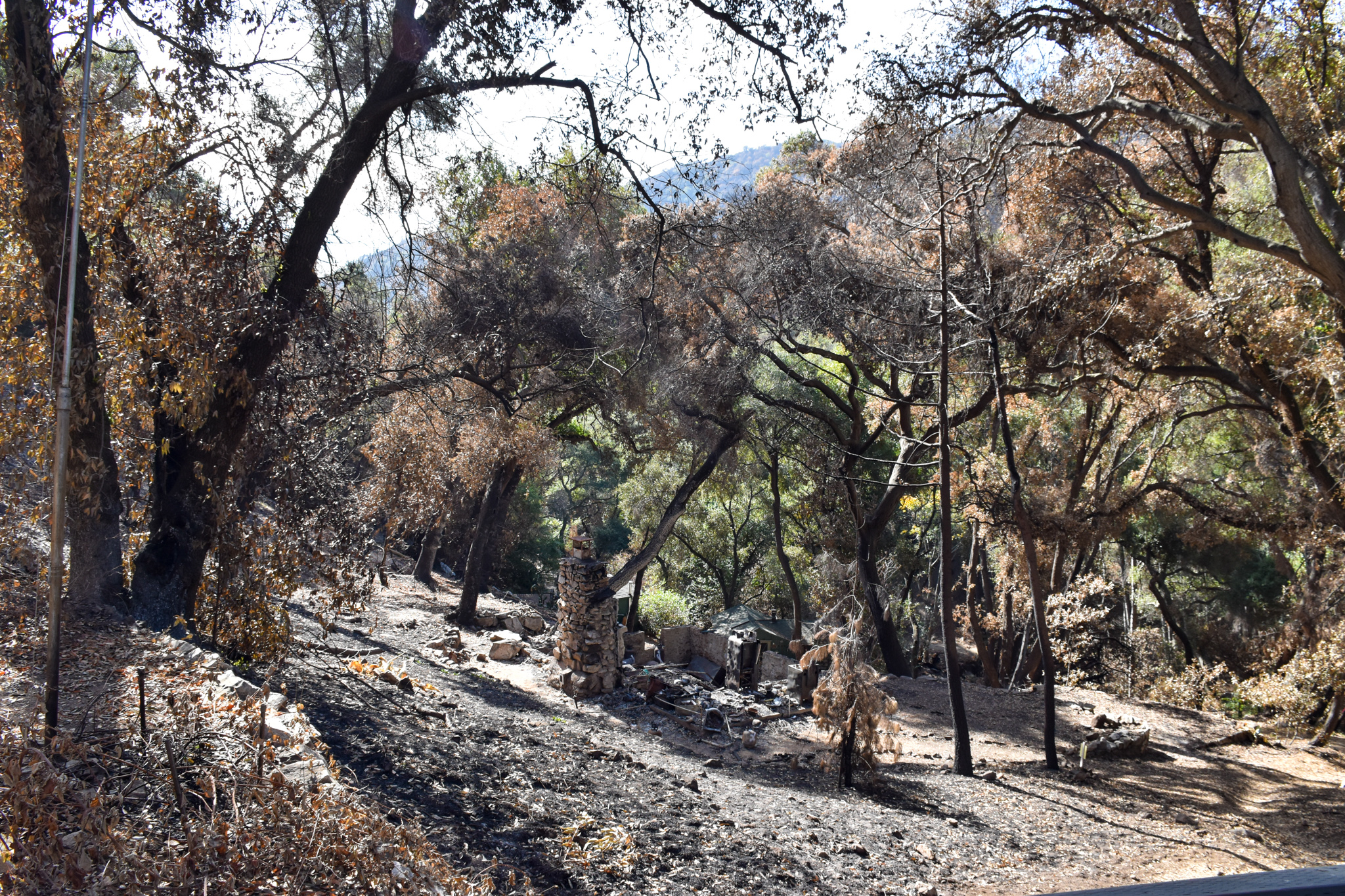 John and Ruth Wood’s cabin, which survived the Bobcat Fire, overlooks the ruins of a cabin that was destroyed by the fire. The cabins in this section were part of an old Girl Scout camp. Photo by Susan Valot for KCRW. 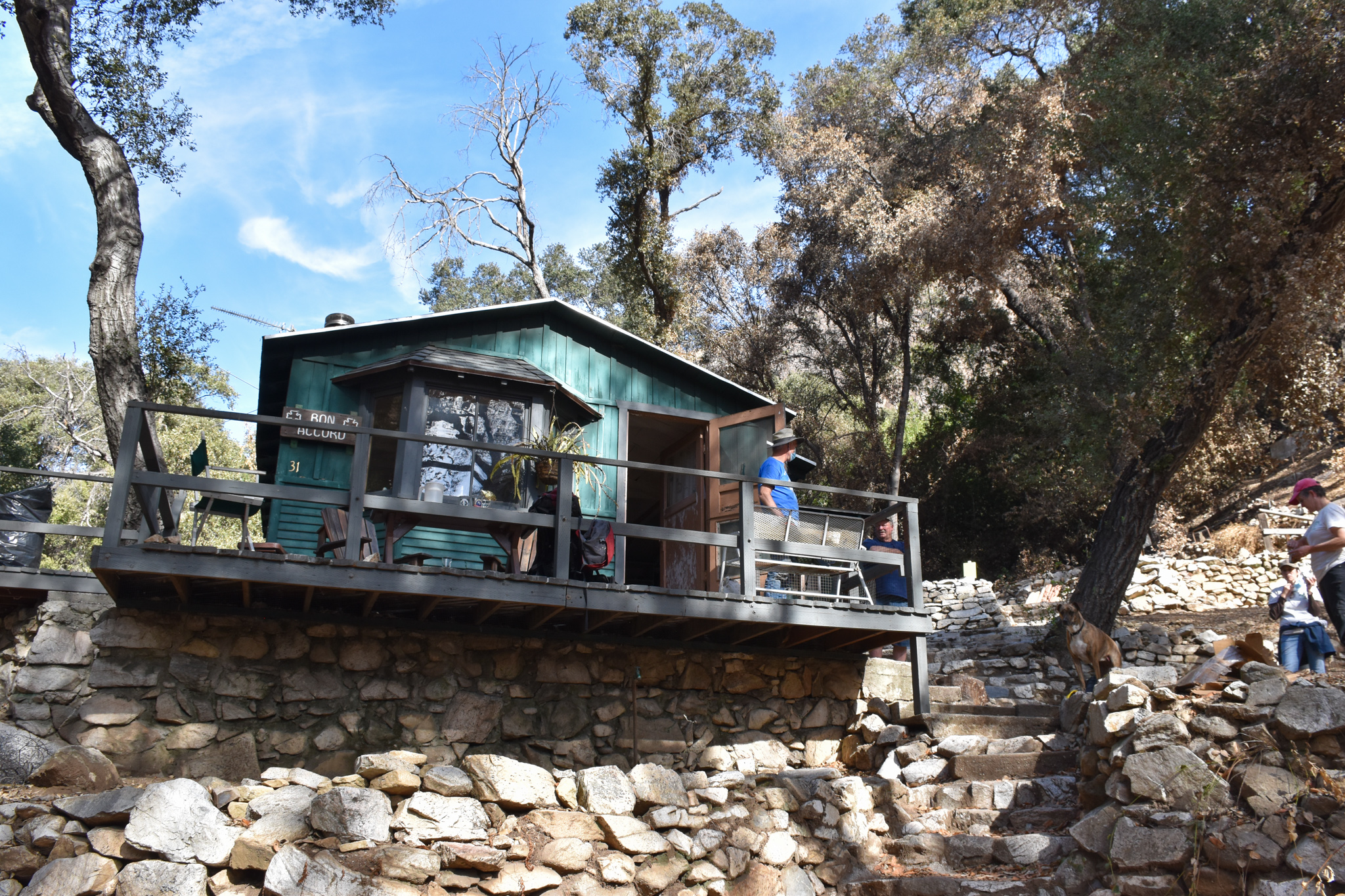 John and Ruth Wood visit neighbors who stopped by on a November day when they were working on some repairs to their cabin. The Wood family lost an outbuilding and a firewood pile, but their cabin survived the fire. Photo by Susan Valot for KCRW.

This part of the Angeles National Forest will not reopen until April 2022. But even with all of the challenges, the sense of community remains. 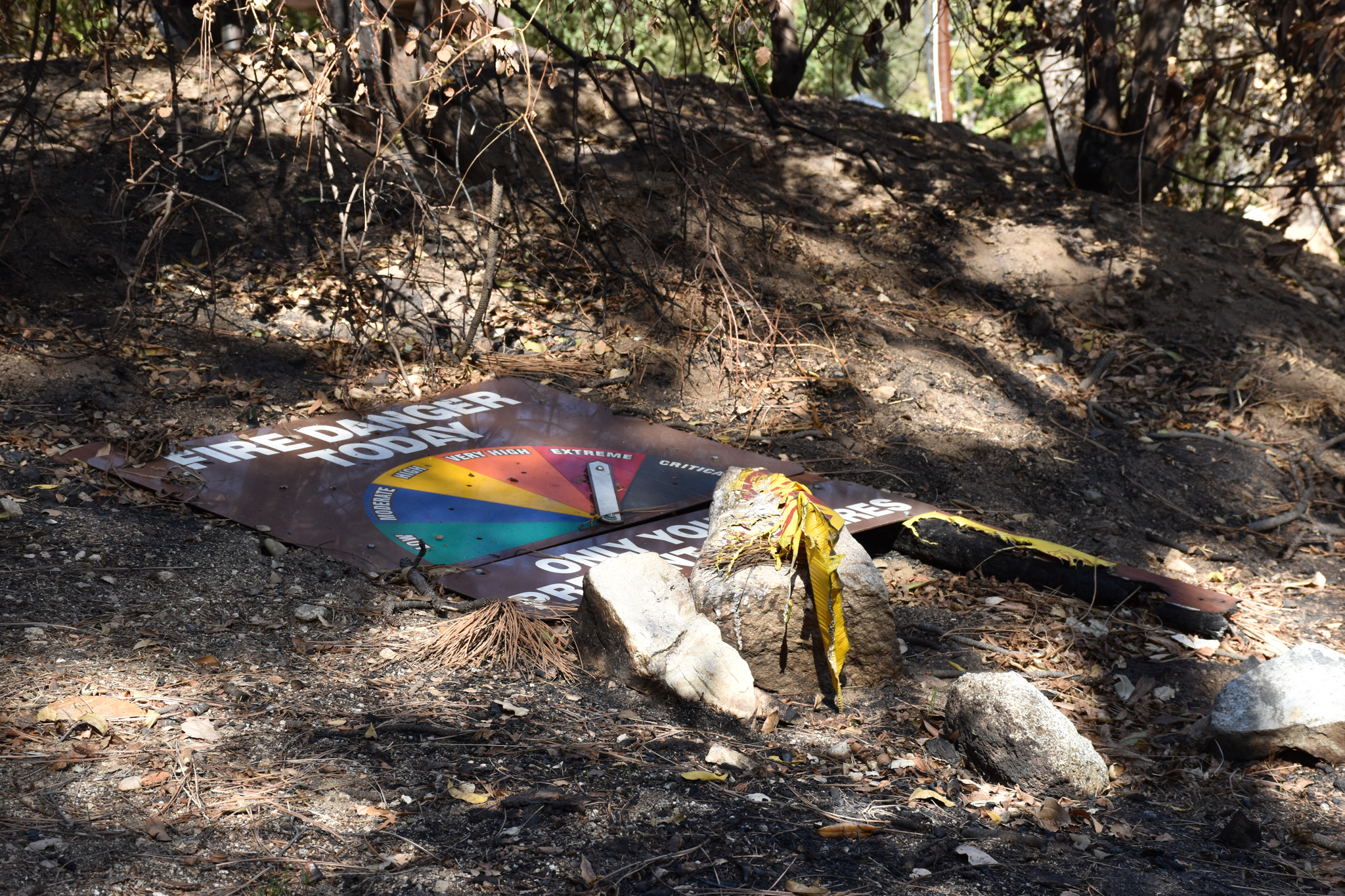 A fire danger sign lies unscathed amid the burn scar of the Bobcat Fire, stuck on “extreme,” the second-highest fire danger. Photo by Susan Valot for KCRW.