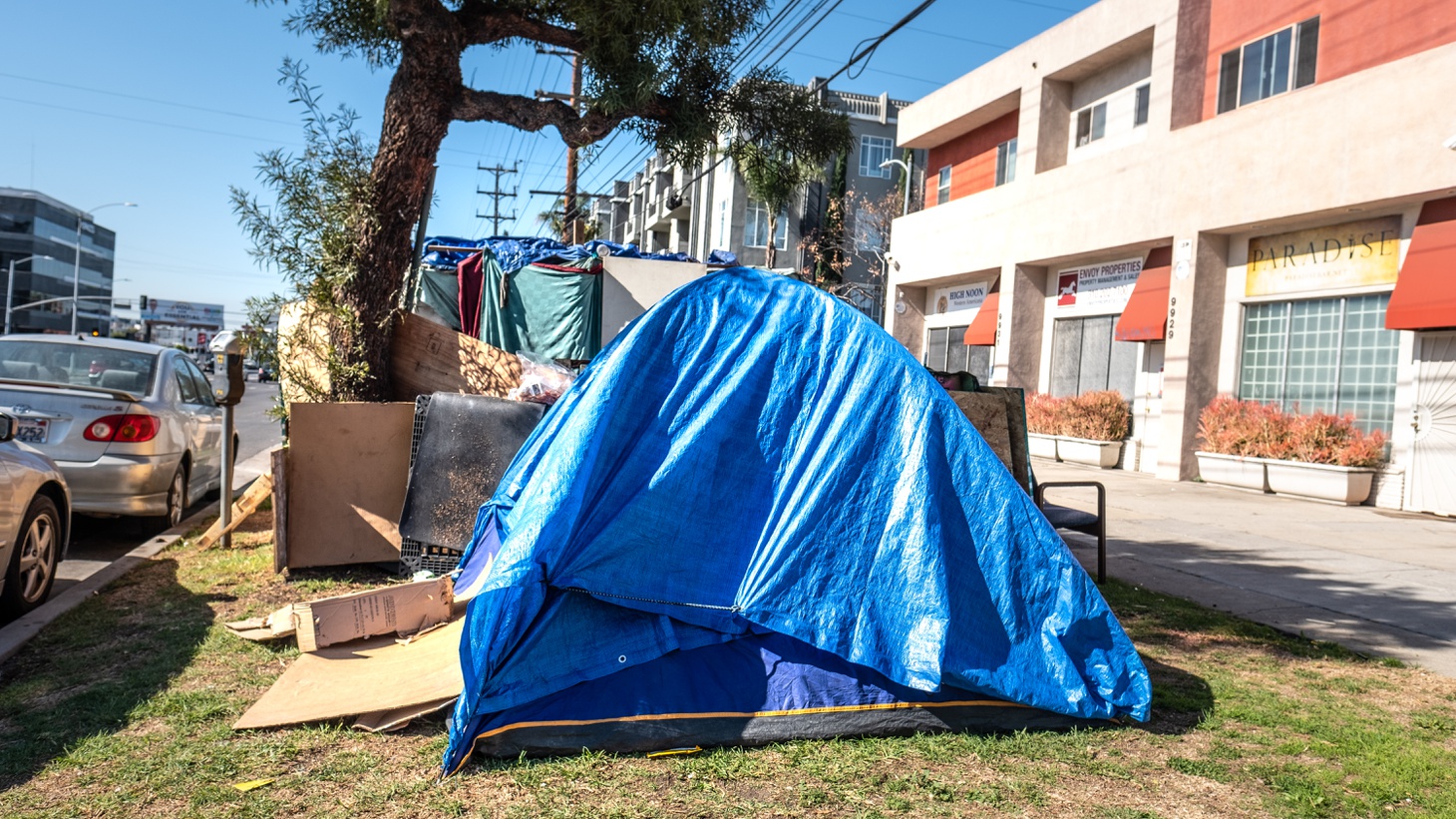 LA City Council voted this week to allow the removal of street encampments like this one at 70 new locations. Photo by Amy Ta.

The Los Angeles City Council this week expanded restrictions on street camping, despite calls from advocates for the homeless to allow unsheltered people to stay put during the COVID-19 surge. Council members voted 11 to 2 to prohibit camping at 70 locations in and around downtown LA, Northeast LA and San Pedro, adding to a growing list of spots where the council has approved similar restrictions.

During Wednesday’s virtual City Council meeting, several members of the public called in asking the council to suspend the measure until the Omicron wave dies down.

According to the LA County Department of Public Health, 207 “homeless service settings” are currently experiencing COVID-19 outbreaks. About 75% are at group shelters. There have also been more than two dozen documented outbreaks in homeless encampments and in facilities with individual rooms.

The Centers for Disease Control recommends allowing unhoused people to remain in place unless individual rooms are available to them, and providing sanitation services like restrooms and hand-washing stations to encampments.

“One thousand people died on our streets last year,” he said. “And quite frankly, the overwhelming majority did not die of COVID. They died from being on the streets.”

Buscaino was one of 11 councilmembers who voted to approve the new no-camping zones. Mike Bonin and Nithya Raman cast the two dissenting votes.

The ordinance that paves the way for camping prohibitions passed in August, and was conceived as a way to balance the regulation of public space with the rights of the unhoused. A federal court ruling says the city can’t ticket or arrest anyone for camping on public property unless shelter is available to them. At this time, the City of LA does not have enough shelter space for everyone who is homeless.

Under this new law, council members can identify specific areas in their districts where they want to prohibit camping, get approval from their colleagues and provide 14-day notice to anyone camped at those locations and then enforce the bans. During a two-week period after the notice, outreach workers are supposed to help unhoused people relocate.

City officials say that while they’ve identified locations where they want to exercise the new restrictions, they have not enforced the law yet, in part because of the COVID-19 surge. Signs have been posted at some of the locations, but no citations have been issued or arrests made.

“This simply is a set of motions that would enable enforcement as opposed to causing it,” said Councilmember Paul Koretz. “It doesn’t automatically mean that suddenly all these encampments and areas are immediately enforced.”

Advocates argue that posting signs is in and of itself a kind of enforcement. Shayla Myers of the Legal Aid Foundation of Los Angeles said that in some areas where notices have gone up, unhoused people are taking it upon themselves to move to other parts of the community.

“When you’re a cop with a gun, you don’t ever have to ever issue a single citation to enforce the law in Los Angeles against people who are unhoused,” Myers said.

The Los Angeles City Council expanded restrictions on street camping this week, while advocates for the unhoused called for a pause on such bans during the current COVID-19...

Why blood supplies are down, what it means for patients at trauma centers

The nationwide shortage of blood is the worst in over a decade, according to the Red Cross. This week, a SoCal trauma center closed for a few hours because of it.

The LA Rams have a chance to play in Super Bowl LVI on their home turf. But they first have to beat Arizona on Monday.