Tiny home company cashes in on the homelessness crisis 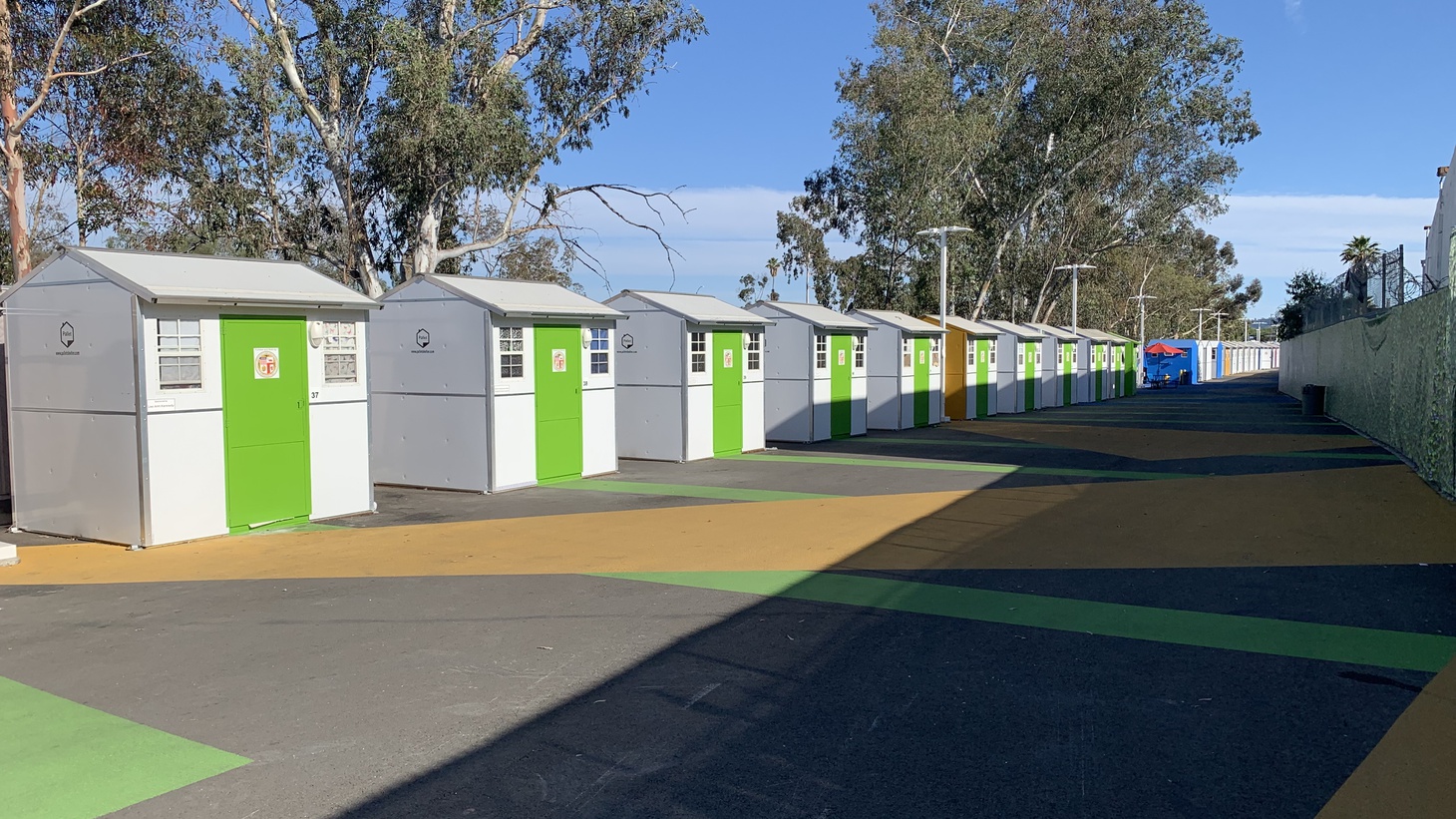 This tiny home village in North Hollywood has 75 structures. It’s one of 11 villages in and around the City of LA to open in the past two years. Photo by Anna Scott.

The number and size of homeless encampments in cities like LA have spiked upward sharply over the past two years – and so have profits for one company that serves them. Business is booming for a manufacturer of the small, prefab homeless shelters known as tiny homes.

Between 2019 and 2020, the Washington state, for-profit company Pallet saw a staggering 7,000% growth in demand for its product, according to founder and CEO Amy King.

In March, the startup announced that it had raised $15 million from a half dozen investors to expand its business. The investors include individuals and social impact-focused funds like Citi Ventures and DBL Partners.

So can a company banking on the homelessness crisis also help alleviate it? Or does growing investment in a short-term, better-than-the-sidewalk solution mean politicians are losing focus on upstream efforts like increasing affordable housing stock and preventing people from falling into homelessness in the first place?

King, noting that Pallet’s workforce includes formerly unhoused and incarcerated people, says her company can both profit and help. As she sees it, the company provides both upward mobility to its employees and a badly needed emergency option for people living on the streets. Still, she said, “I will be very happy to celebrate the day that we shut the doors of the shop because our product is no longer needed.”

Critics see Pallet’s success as an indicator of a troubling pendulum swing.

“The only thing that solves this crisis is housing,” says Pete White, executive director of the Los Angeles Community Action Network, an unhoused advocacy and organizing nonprofit based in Skid Row. “We find ourselves now in a place where there has been a backpedaling away from anything akin to permanent housing.”

“We refuse to refer to a tool shed as a tiny home,” he adds.

Pallet isn’t the only company manufacturing small, free-standing shelters, but it has cornered the market. So far the company has supplied 82 of the fenced-in communities known as tiny home villages around the country and in Canada, including 10 sites in the City of LA. An 11th site, for unhoused veterans, stands on a federally-owned Veterans Affairs campus in West Los Angeles.

This growth was fueled partly by the need for individual shelter options amid the pandemic. In LA, demand was also pushed by litigation.

The city has long been severely short on shelter beds for the more than 41,000 people estimated to live unhoused inside its limits, by last count. At the same time, a federal court ruling prevents the city from ticketing or arresting people for camping in public spaces unless shelter is available to them. That’s one reason street encampments have grown.

In 2020, a group largely made up of downtown business owners and residents sued LA City and County over encampments and conditions on the streets. City officials recently settled and agreed to build potentially thousands of new shelter beds. The goal is to create enough shelter, housing or some combination of both to accommodate 60% of the unhoused people in each council district — a threshold expected to allow city officials to enforce anti-camping laws.

Pallet, which lobbied the mayor’s office, City Council members and various city departments throughout 2020 and 20201 on homelessness policy and projects, was in the right place at the right time.

The company’s eight-foot-by-eight-foot product (they also offer larger models) sell for approximately $7,000 each, plus shipping, and can be put together in less than an hour. Villages can also be assembled on oddly-shaped pieces of publicly-owned land that might not work for traditional construction. So far LA has spent $48,452,115 to construct tiny home villages, according to the City Administrative Officer’s (CAO) office, plus $25,133,900 annually to operate the sites.

The CAO says the villages account for 1,252 beds. That number assumes two people per tiny home, which some City Council districts are starting to require, including part of the San Fernando Valley, represented by Paul Krekorian, and the district that includes much of downtown and Boyle Heights, represented by Kevin de Leon.

The structures are equipped with climate control and electricity, and the villages include on-site social services, three meals a day, and access to shower and restroom trailers.

To many, tiny home villages represent a long overdue emergency response to the thousands of people living and dying on LA’s streets each year, and an untenable number of encampments on public property.

“The streets can't be the waiting room for permanent housing,” says Ken Craft, CEO of the nonprofit Hope of the Valley, during a recent tour of a tiny home village in North Hollywood. His organization has been hired by the city to operate five villages in the San Fernando Valley. “We’ve got to bring people indoors because the longer we leave them outside, the worse things are getting.”

City officials, including LA Mayor Eric Garcetti, say the city is finally doing it all — expanding emergency relief and investing in permanent housing through efforts such as Proposition HHH, a voter-approved bond measure to help pay for new subsidized apartments, and Project Homekey, a state-funded initiative to buy and convert commercial properties into homeless housing.

But in a city with finite resources, Pete White of LA CAN sees the scales tipping toward temporary shelters and sweeping unhoused people off the streets, rather than investing in permanent solutions. The rush to reach the 60% threshold, he says, and the embrace of tiny homes, is about enforcement more than compassion.

“It's all criminalization when you peel the onion back a little bit,” he says.

People staying in tiny home villages give mixed reviews. While many are grateful for privacy, meals and a roof over their heads, they also say that the cramped quarters and 24-7 security gets old quickly. A typical stay, according to Craft of Hope of the Valley, ranges from four to 12 months, because of the lack of permanent affordable housing in and around LA.

“I’ve been homeless for a long time,” says Steve Mason, 58, who moved into a village in North Hollywood about a month ago. While it’s been a welcome relief in the short-term, he says, “It’s my time to trade one of these gorgeous tiny homes to someone else less fortunate than me and move on.”

Tiny home company cashes in on the homelessness crisis

Kevin Beasley’s new art exhibition in LA features mixed media that explores the Black experience and how it shapes American history and culture.