Two days after LA’s City Council voted to resume sweeps of some homeless encampments, the first major cleanup in months happened Friday in San Pedro. Dozens of people camped in tents along a waterfront stretch of Beacon Street were forced to move, including 35-year-old Elicia Suarez and her wife, Elisa Ayala.

“This is a last-minute thing right now,” Suarez said as she scrambled to pack up belongings outside the large tent she shares with Ayala and their dog, Bear. In the past, Suarez said the city gave a few days notice before this kind of cleanup. This time it was barely 24 hours. “Why are they making us move when it’s coronavirus?” she added.

The Centers for Disease Control and Prevention recommends allowing people living in encampments to stay where they are if individual housing is not available. Clearing encampments, according to the CDC, can increase the potential for disease spread by dispersing people throughout the community.

A spokesman for LA Mayor Eric Garcetti told KCRW that his office is working on a set of protocols for encampment cleanups based on advice from public health experts, including the CDC. But during Friday’s sweep, a spokesman for City Councilmember Joe Buscaino, who represents San Pedro, argued that the city is already following proper procedures.

Kvartuc was referring to a 100-bed “bridge housing” shelter that recently opened near the Beacon Street encampment. It’s one of about 20 new transitional housing facilities around the city, including three in District 15, which includes San Pedro. The shelters are part of a program spearheaded by Garcetti called “A Bridge Home.”

When the program launched, part of its design was to create so-called “special enforcement zones” around the new shelters, with increased cleanups by the city’s sanitation department and increased police patrols. The idea was to ward off neighborhood opposition to the new shelters with the promise of encampment-free streets around them. During the pandemic, the city ceased all cleanups. But last week’s 10-4 vote by city councilmembers reinstated deep cleanings in the zones around bridge housing shelters.

In a letter to the City Council ahead of last week’s vote, the San Pedro Chamber of Commerce wrote that its board of directors had supported new shelters in the area, but now needs “the tools to clean up the area and assist the residents and businesses that have been living with the encampment in their neighborhood.” 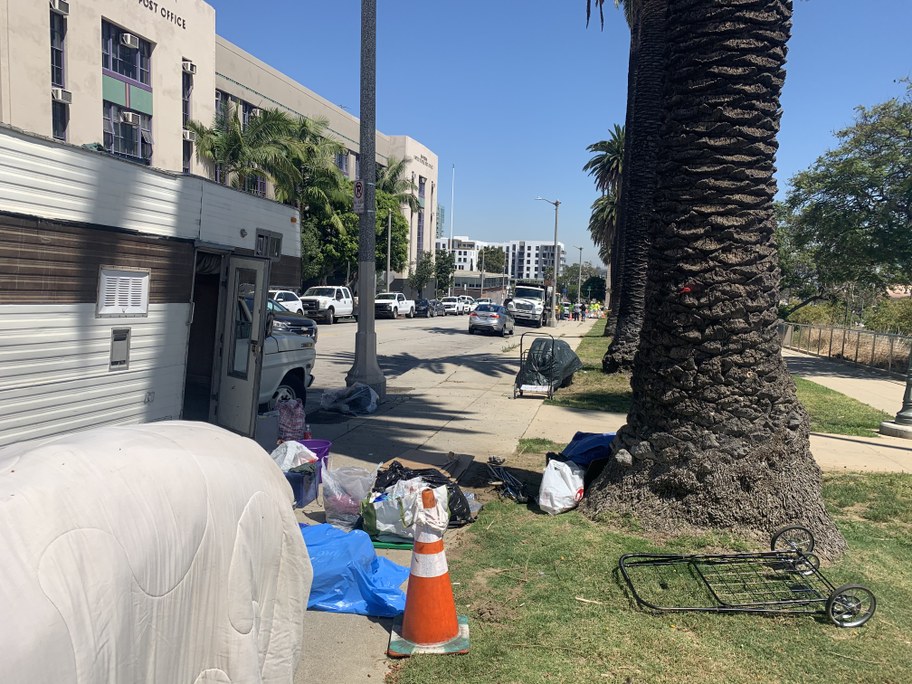 City workers break up a homeless encampment for street cleaning on Beacon Street in San Pedro. Photo by Anna Scott.

Dana Dixon lives around the corner from the encampment. On Friday she said that a lack of garbage cans in the area compounded health concerns. She said people living in the encampment “often use our garbage cans and there will be clothes that … have excrement on them, and that’s concerning.”

The day before the Beacon Street cleanup, city workers conducted outreach at the encampment. During the cleanup, city officials provided mobile showers and restrooms that were used by 23 individuals, according to Buscaino’s office. His staff also reported that sanitation workers removed 4,800 pounds of trash and debris and 70 pounds of human waste.

“The councilman spent the last two years getting that shelter built,” said Kvartuc. “And the promise was made that it's for this population … not all of them will accept it, but we owe it to this neighborhood after they said yes to the shelter, to ensure that there are no tents.”

He also said that many encampment residents have nearby shelter beds but keep their tents as “second residences,” something his office would like to curb. 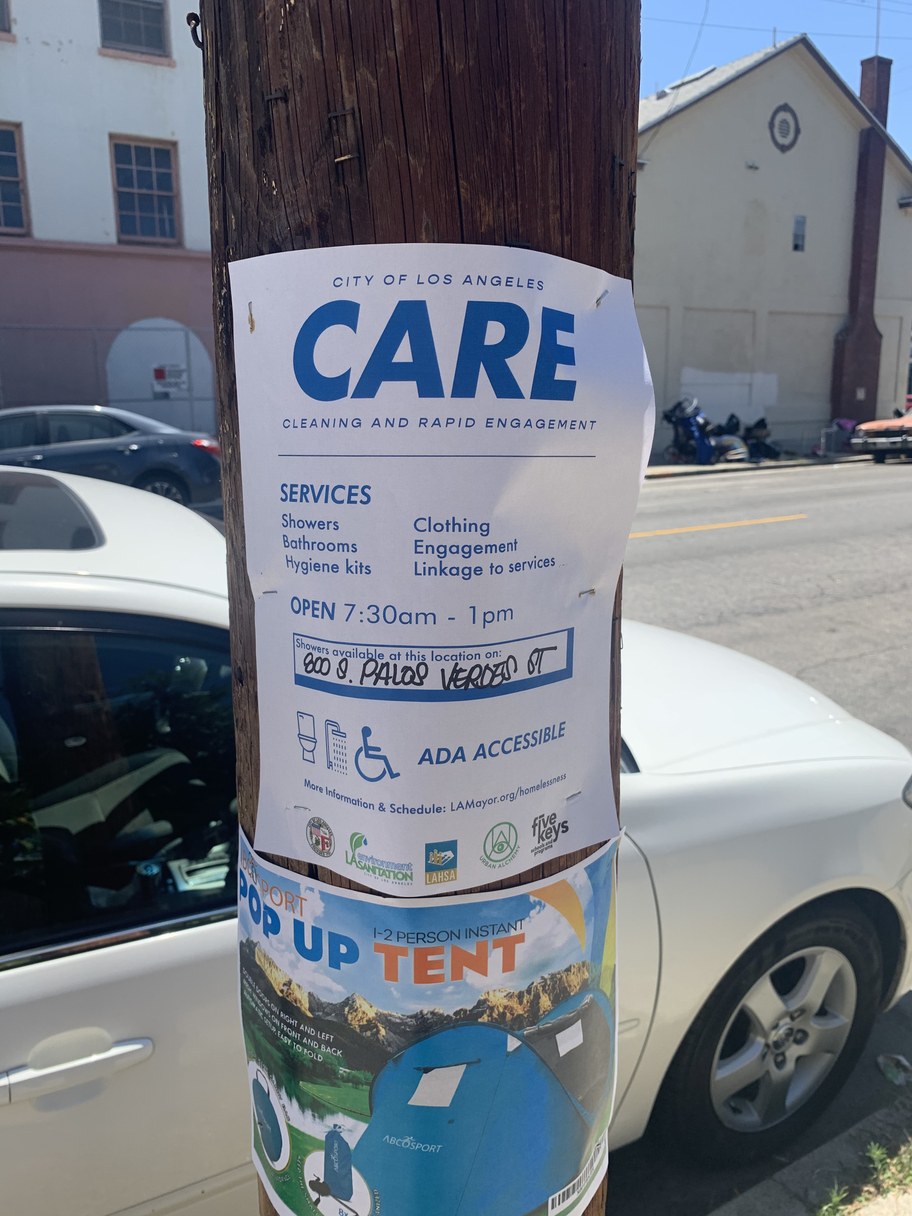 A notice posted near Beacon Street about services available during the sweep. Photo by Anna Scott.

Elisa Ayala, the encampment resident who lives with her wife, Elicia Suarez, said she has a bed at a shelter down the street that’s overseen by LA County. But she spends her days outside to be with Suarez. They said they stayed at the shelter together for about five months before Suarez came back outside.

“Me and her, we walked in there … first day when it first opened up,” said Suarez. But she said she left after promises of housing assistance and job training didn’t pan out. “Guess what? None of that happened.”

Suarez and Ayala said they still hope to eventually move indoors to a place of their own. In the meantime, Suarez suggested the city open a designated camping area for unhoused people on and around Beacon Street to relocate to.

“Maybe they should map out an area … that's like, businesses that aren't really open or anything, that’s not too far from here,” she said. “Cause everybody’s scattering everywhere, nobody knows where to go.”