On San Vicente Boulevard in Brentwood, there’s a homeless encampment that’s hard to miss. While it’s not unusual to see makeshift shelters on the streets of just about every neighborhood in Los Angeles, this particular encampment is striking in its uniformity. More than two dozen large, identical tents stand in a line on the sidewalk, with matching American flags pinned to the outside.

“We call this ‘Veterans Row,’” said former Marine and combat medic Ryan Higgins, 45, on a recent afternoon as he sat strumming a guitar. Not coincidentally, the tents are right outside the walls of the West LA VA, a 388-acre, federally-owned compound offering health care and other services for military veterans. For years, homeless veterans have gathered and camped on the sidewalks around the campus. But “Veterans Row” only sprang up in the past few months. Residents there say it is designed to grab attention.

“We’re standing our ground as a peaceful protest,” said Dean Lee, an Army veteran. But against what, exactly? And why now? 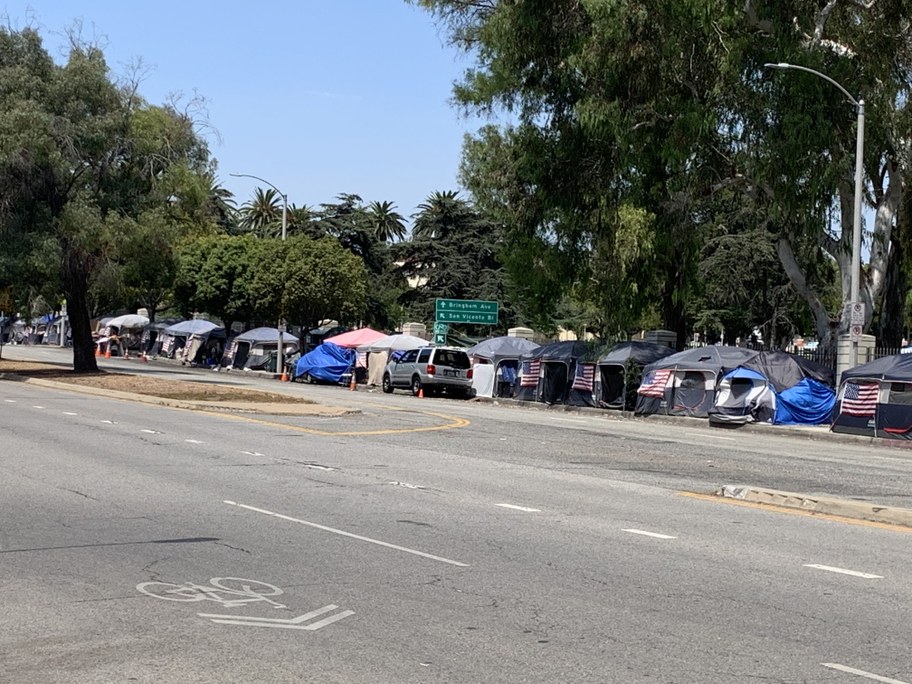 Right outside the West LA VA, there are more than two dozen identical tents with matching American flags pinned to the outside. Photo by Anna Scott.

The origins of some veterans’ grievances with the West LA VA go all the way back to the campus’ founding in 1887. That year, a wealthy family donated the land with the stipulation that it had to serve as a home for military veterans — and for a long time it did. At its peak during the Korean War, about 4,000 veterans lived on the property, according to the 1887 Fund, a nonprofit created by descendants of the original land donors.

By the 1970s, however, VA officials started leasing the property to all kinds of commercial enterprises. They maintained medical and other services for veterans, but brought in a dog park, a UCLA baseball stadium, and even a parrot sanctuary at one point, to name a few.

A decade ago some homeless veterans sued VA officials over those nonveteran-related leases. Ultimately, many were deemed illegal and a number were eventually cancelled. (The parrot sanctuary is gone, for example.) But the issue didn’t end there. Years later, a bribery scandal unfolded involving a parking lot operator who’d rented space on the campus. The head of the lot business and a VA contract officer were sent to prison over it.

From the fallout came a new vision to return the West LA VA to its original mission. In 2016, officials unveiled a proposal to bring approximately 1,600 units of permanent supportive housing for formerly homeless veterans to the campus, along with a variety of amenities and enhanced veteran services. But the plan has moved slowly.

The West LA VA campus currently houses 54 permanent supportive housing units open to formerly homeless veterans. Approximately 200 more are scheduled to open in 2022, with the rest of the project unfolding in phases over the next decade.

The plan is only now approaching the earliest stages of major construction due largely to its scale and complexity, said Dan Garcia, CEO of Vets Advocacy, a nonprofit created as part of the settlement stemming from the homeless veteran lawsuit.

“It took a long time to get started,” said Garcia, who is an Army veteran himself and served in Vietnam. “But I think that we’re in a very good place right now.”

Two significant roadblocks, Garcia said, were an extensive environmental review process and the fact that the U.S. Department of Veterans Affairs is not a housing developer and had to bring in an outside team to handle financing and construction of the new master plan. Now that team is in place. It includes the nonprofit lender Century Housing Corporation, the affordable housing developer Thomas Safran & Associates, and the nonprofit U.S.VETS, which is the country’s largest service provider for homeless veterans. They are all acting as co-developers on this project

The condition of the West LA campus also presents a time-consuming challenge, said Stephen Peck, president and CEO of U.S.VETS.

“The infrastructure is 50 years or 60 years old,” he said. “All the buildings need to be renovated significantly ... it's a huge job.”

But in the end it will be worth the wait, Peck said, because this one property will provide enough permanent housing for almost half of LA County’s nearly 3,900 homeless veterans.

While the West LA VA master plan and other permanent supportive housing projects around Los Angeles inch along, the coronavirus pandemic has brought new urgency to getting people off the streets now. To that end, in April VA officials decided to try something that had not been done in LA for four decades prior: They opened a tent city on the West LA campus, with access to restrooms and services.

It started with 25 people in one parking lot and has now expanded to almost 50 people in two lots. The deputy chief of clinical operations for the West LA VA’s homeless programs, Dr. Anjani Reddy, said the program has served more than 200 veterans and helped them access health care and permanent housing resources.

This sanctioned encampment also had a big role in how “Veterans Row” came to be.

Every Sunday for the past 12 years, Bob Rosebrock has protested outside the West LA gates. He opposes any commercial uses on the land and has long advocated for a tent city on the campus as a way for the property to serve a maximum number of veterans while permanent housing is being developed. When he heard about the VA’s new tent program, he tried to donate a 10-by-14-foot, walk-in tent.

The tent was rejected, he said, because it was the wrong size. “Only tent they would accept were these small pup tents,” he said. “We can do better than that.”

Rosebrock called on donors, ranging from his sister to the conservative activist organization Judicial Watch, to purchase about 30 large tents, plus the American flags. He distributed them to people living on the street outside the West LA VA with help from other activists, including Robert Reynolds, a 31-year-old Army veteran. 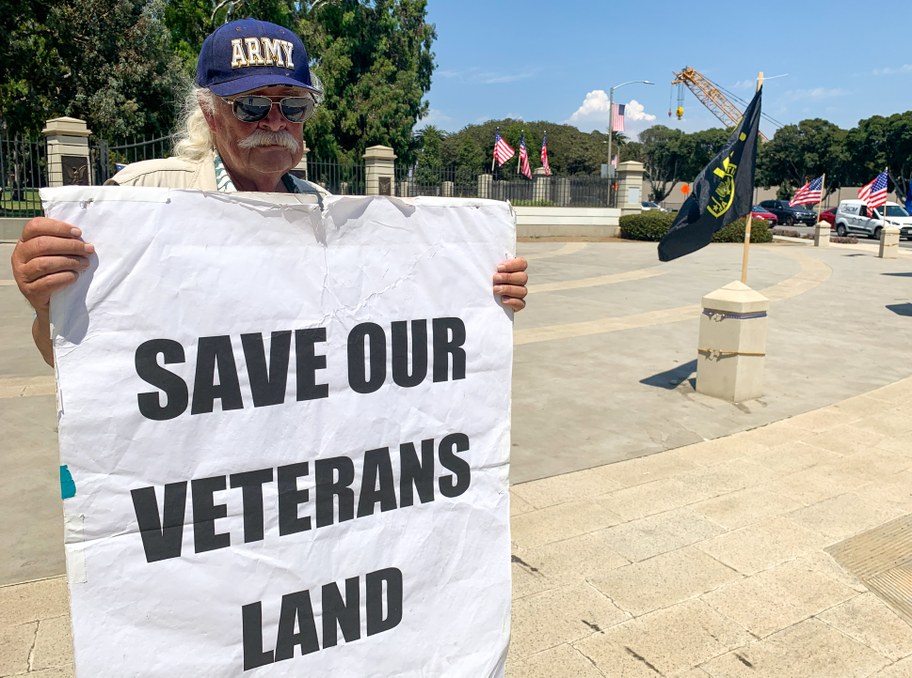 Army vet Bob Rosebrock has protested outside the West LA VA every Sunday for 12 years. He opposes commercial uses on the land. He advocates for a tent city on the campus so the property could serve as many veterans as possible, while permanent housing is being developed. Photo by Anna Scott.

Reynolds served in Iraq, where his combat experiences left him with PTSD. A few years ago, he landed on San Vicente Boulevard himself. Now he’s housed, but he returns to the streets of Brentwood most days to help other veterans. He views ‘Veterans Row’ as an informal bridge between the streets and assistance offered on the VA campus, from substance abuse treatment to housing programs.

“We are currently trying to push people into the VA,” he said. At the same time, “We really pride ourselves on the fact that no longer will a homeless veteran arrive at the West LA VA and have to sleep on the sidewalk.”

Reynolds, like others on Veterans Row, also sees the encampment as a protest. He doesn’t think the master plan for the West LA VA goes far enough. He would like to see the amount of housing return to its Korean War-era peak.

Officials with the VA and its development team say that’s impossible. Back then, veterans were housed in bunkers and other structures that have long since been demolished, according to the 1887 Fund. Plus the current plan, when completed, will already be three times bigger than any similar project in the country, said Stephen Peck of U.S.VETS

“Something three times bigger than that — it’s kind of unimaginable,” he said.

Over the next few weeks, the West LA VA plans to expand its tent city again, from 50 to 100 people. They’re also moving it from the parking lots to a lawn with space for larger tents. VA officials say they’re conducting outreach on Veterans Row to try and move eligible veterans there to the grass inside.

It’s not the ideal scenario anyone imagined and new permanent homes are still years away. But with its growing tent city, the West LA VA could soon house more homeless veterans than it has in years.


*A previous version of this story misspelled Stephen Peck's first name as Steven, and also implied that Century Housing Corporation, Thomas Safran & Associates and U.S.VETS would have different roles in redeveloping the West L.A. VA campus as lender, developer and service provider, when in fact they are all co-developers on the project.