Arroyo Seco Tiny Home Village: The newest option to bring people on the streets into housing Next to the Arroyo Seco Parkway, just behind the Avenue 60 bridge, dozens of rooftops are visible behind a wall, surrounded by a fence and behind a security gate. Each roof sits on a tiny house about the size of a garden shed, eight by six feet tall. Their outside walls are painted with hearts, rainbows, bumblebees, and bunnies.

This is the Arroyo Seco Tiny Home Village. It is an alternative to a homeless shelter, with 177 separate sheds for each person or couple. It is meant for unhoused adults who live within a three-mile radius of this Highland Park site.

“That’s important,” says Rowan Vansleve, president of Hope of the Valley Rescue Mission, which operates the village. “If you are going to have a homeless shelter in your community, you should see people in that area get off the streets first. You want to see your streets cleaned up. You don’t want people being bussed in from all over the city.”

With homeless encampments proliferating across Los Angeles, including in Highland Park, the need is obvious. But that doesn’t mean there will be demand. Will local unhoused residents take up the opportunity for shelter these tiny houses provide? 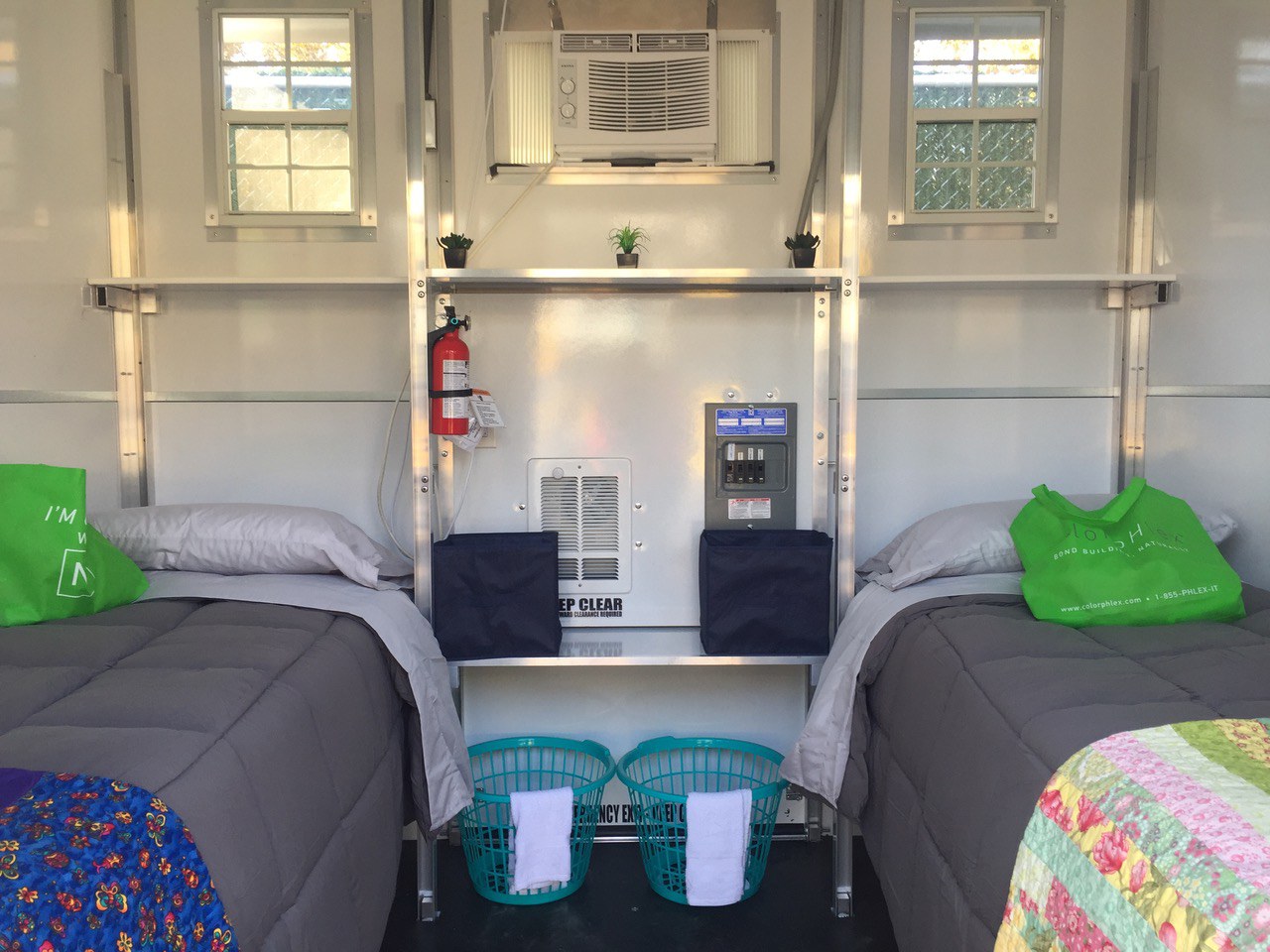 This tiny home for two is ready for new residents at the Arroyo Seco Parkway village. It comes with air conditioning and heating. Photo by Kerstin Zilm.

Rules, curfew, a bed, and a key

Living in the village comes with rules. Weapons, drugs, and alcohol are not allowed inside the fence. Curfew is from 10 p.m. to 6 a.m.  There is no running water in the homes, and bathrooms are shared. The furniture consists of two beds that can be pulled up and latched to the wall, a small desk, a bookcase, a kennel for those who bring a pet, and one more crucial thing: a key.

“The locking door is probably the most important part of this shelter,” says Vansleve. “To a woman who has been a victim of violence on the street, that locking door can be the difference between her getting health and healing, and staying on the street.”

About three blocks from the new tiny home village, Gina agrees. Having a place she can lock is worth playing by the rules.

Gina has been living on the streets for six years. She is embarrassed about her living situation and does not want to give her last name. The 51-year-old constructed her own precarious little home out of shelves, tarps, and blankets on a dirt spot at an intersection in Highland Park.

She signed up to move into the new village as soon as she heard about it. “Just tell me when it’s open. I’ll be there,” Gina says. She cannot wait to have an address again, open a bank account, wash her clothes in the shared laundry, shower before work, and get a good night’s sleep.

Gina’s friend Matt, who also won’t give his last name, lives in a camper parked nearby, and he is not so enthusiastic about moving in. He has a problem with the curfew from 10 p.m. to 6 a.m.

He has looked at the tiny home village from a distance. All those flowers, hearts, and bumblebees painted on the homes are a little too cheerful for him. “I don’t live in a circus. I’m just not that happy every morning.”

Gary Sheffard has been sleeping at the same spot on a Highland Park sidewalk for 12.5 years. The tiny home village is just a 20-minute walk away. To Gary, moving there would mean leaving the comfort of everything he knows and being lost.

Adjusting to a home, structure, and a new routine is not easy

Stephen Smith can relate. In February, the 59-year old moved into a similar tiny home shelter in North Hollywood with 39 houses. He did not sleep the first night after he arrived. For a week, he kept his routine, had food and a beer in his car before returning to the village, and did not talk with anybody.

“I was listening to see what’s going on and what’s not going on. People just walking back and forth, where I was pretty much used to staying in my car, and I didn’t have to deal with nobody.”

Smith is more comfortable now. He installed a TV in his tiny house and stacked books, soup cans, water, and air freshener neatly on the shelves. He started to appreciate the caseworker, the structure the shelter gives him, the available services, and the camaraderie. “I look at that as: People honestly do care. When you are out on the street, people really do not care about you. Let’s get that straight.” 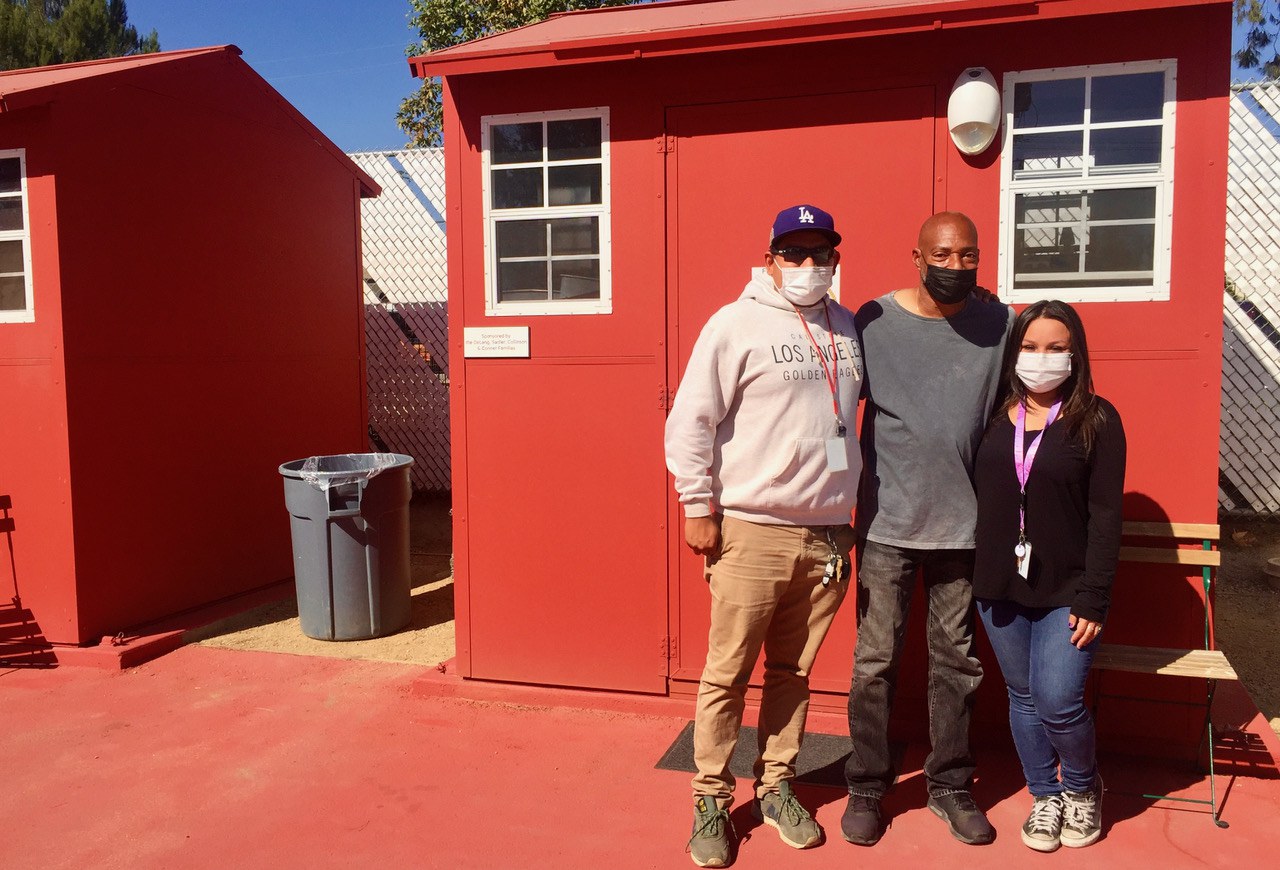 Stephen Smith poses with his case workers Priscilla Rodriguez and Gerardo Valdez in front of the tiny home he has been living in since February at Chandler Blvd. in North Hollywood. Photo by Kerstin Zilm.

Not everything in this village is perfect, Smith warns. He would like to have a kitchen and be allowed to bring a knife for chopping vegetables. He has seen people return to the streets because they broke the rules. Others preferred to go back to encampments where they’ve formed a community of friends.

Winning over the neighborhood

It’s not just unhoused people who need assurance that a tiny home shelter in their neighborhood is a good idea, says Vansleve. The group gets protests and even death threats every time they open one of these sites. “Nobody is ever going to say, ‘I want a homeless shelter in my neighborhood.’ It’s not going to happen,” he says.

That’s why Hope of the Valley offers open houses, tours, sleepovers, and events like art walks before the opening of a new village.

Just before the Arroyo Seco village opens, Corina and José Rivas come to take a closer look. They live one minute from the shelter, and when they found out about it, they were initially concerned it might be bad for the community.

Vansleve explains to them that the site is funded by the City of Los Angeles, costs $23,000 per bed, and the expected time until residents leave for permanent housing is six to nine months. The Rivas family come around.

“Seeing what has been created for the people in need of a shelter puts you at ease,” says José Rivas. “To know that the only difference that is going to happen is it is going to create more neighbors for us. Hopefully, this is one step for their future to progress.”

Meanwhile, around the corner, Matt seems to be wavering. He is already on a list to move in when a house is available and says he might be willing to give the cheerful tiny homes — and even the village’s rules — a chance. “It’s somewhere safe to sleep. The air conditioning sounds pretty good. The shower is probably number one. I mean, it beats the street.”

Arroyo Seco Tiny Home Village: The newest option to bring people on the streets into housing

Next to the Arroyo Seco Parkway, just behind the Avenue 60 bridge, dozens of rooftops are visible behind a wall, surrounded by a fence and behind a security gate.

The toll of a year and a half of remote learning is now starting to show its colors. The LA Times analyzed data over the past school year to find out how students are faring...