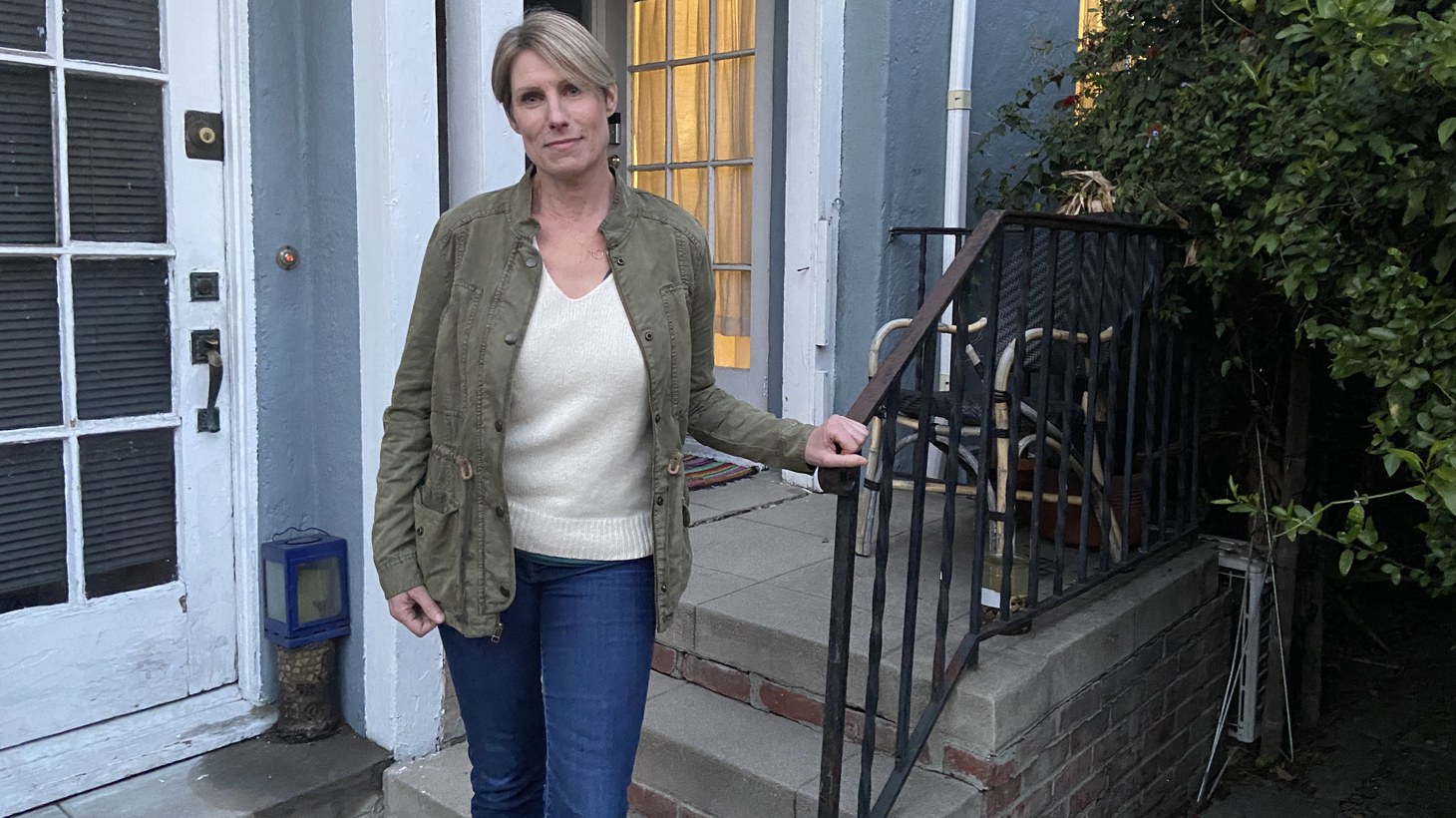 “In the beginning, it was just me and I was on the air for two hours every single night. … By the time I was busted in 1998, there were 98 DJs, and it was a 24/7 operation,” recalls Sue Carpenter outside the former headquarters of her pirate radio station, KBLT. Photo by Giuliana Mayo.

In 1995, on a hill high above Silver Lake Junction, a pirate radio station was born when a motorcycle-riding freelance-journalist-turned-pirate named Sue Carpenter hung up her shingle – or antenna.

Broadcasting from a closet in her unassuming apartment building, Carpenter named her station after a sandwich, “KBLT'' and flooded the airways of Los Feliz and Silver Lake.

“In the beginning, it was just me,” Carpenter recalls. “There was this weird closet under the stairway that I repurposed into the radio station.”

Eastsiders caught on, and soon Carpenter had to get more DJs to keep up with demand. And with the DJs came even more listeners. “I would go shopping at the time and people were tuned in [to KBLT] on their radios,” she recalls. “People would call in on the voicemail and just say that they were listening in their homes.”

For years, no one busted her.

“My landlord definitely did not know,” Carpenter says. She told her neighbors the antenna she was putting on their balcony was for TV. “But it was like you'd never seen a TV antenna that looked like that. And then eventually, when that wasn't tall enough, I climbed up on the roof and put an even crazier antenna up there.”

The goal was to provide an alternative to the music being played on commercial radio at the time, like Mariah Carey and Hootie and the Blowfish. “It was like Cambodian psychedelia, it was vintage country. It was drum and bass. It was classics. I played 60s French pop. So it was a real gamut of music that you wouldn't normally hear on the radio,” says Carpenter. “One of my favorite shows was called Three Martini Breakfast. It was Wednesday mornings. And these guys would show up in seersucker suits driving like 1940s cars, and they would come in and they would play Frank Sinatra.”

But it couldn’t last forever, pirate radio being illegal and all.

In 1998, the FCC was hot on their trail, chasing down other pirates who were also using frequency 104.7 in their small pockets of LA. One day the FCC took down a pirate station outside USC. “And because those people knew us, they called us and said, ‘They thought we were you! So you need to go dark.’ And we did,” Carpenter explains. “We were dark for a couple of months. Then we came up with this elaborate [system] bouncing this signal from my house to a high rise on Sunset Boulevard. And then we had like all of Los Angeles for a glorious two weeks. And then somebody turned off the signal. And I raced to my own doom on my motorcycle and ran up the stairs and ran into the FCC. And that was the end.”

The FCC gave Sue a choice: Hand over the equipment, or pay a $10,000 fine. She did the math and let them confiscate the $500 worth of gear she’d picked up at Radio Shack and headed back to the Silver Lake station that they never found — no small point of pride — to shut it down for good.

“The very same day that I got busted, I was offered a job at the LA Times,” Carpenter says. “And so that's what happened to me. It was like, ‘come out from the underground and join the mainstream.’ And that’s where I’ve lived ever since.”

In 2004, Carpenter wrote a memoir about her time behind the mic called “40 Watts From Nowhere,” which is out of print, but can still be found on various corners of the internet. 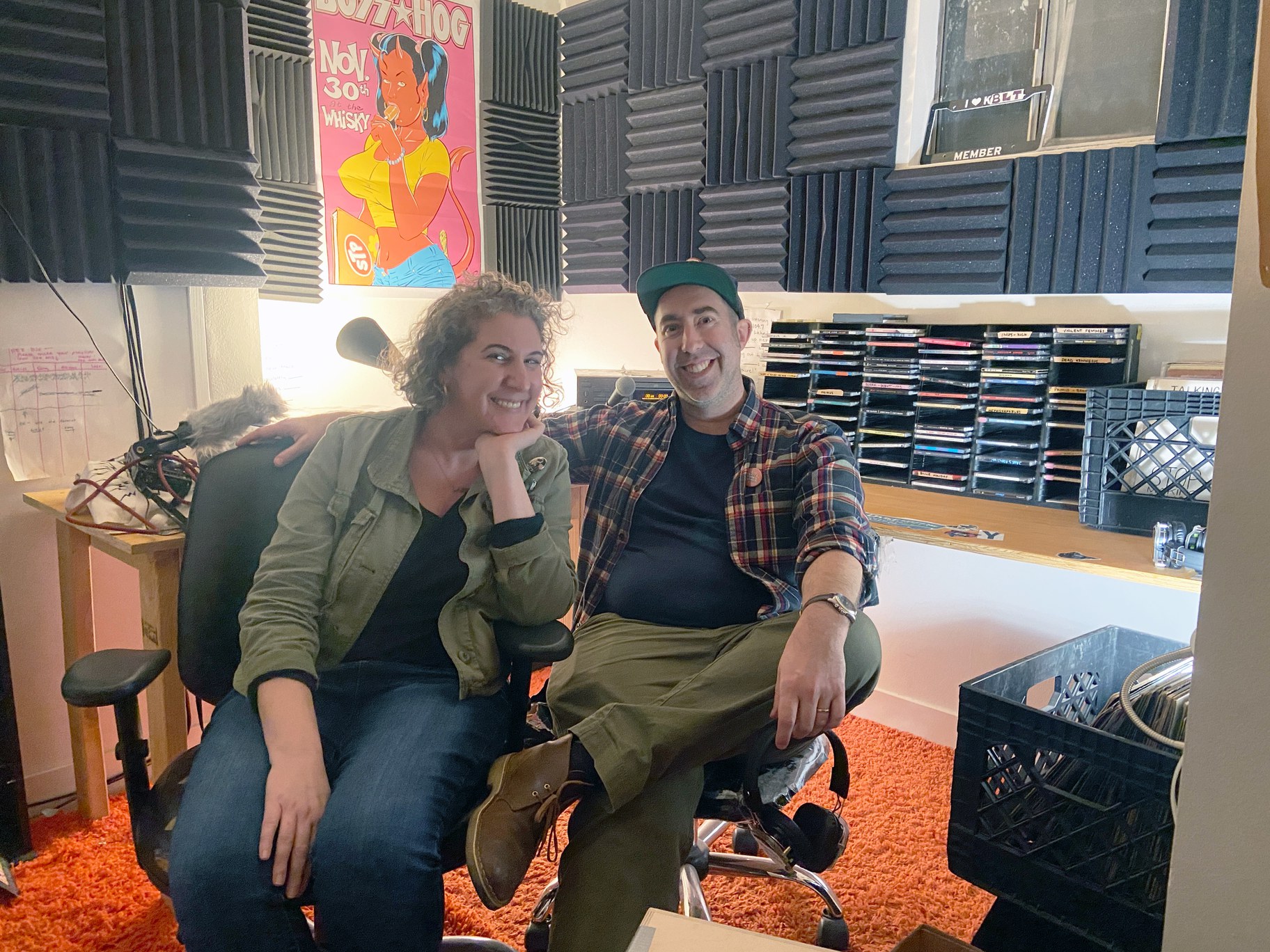 Andy and Jeff Crocker sit in the reimagined KBLT DJ booth beneath a vintage rock poster by the artist Coop. Photo by Giuliana Mayo.

Fast forward to 2022. The married duo behind Mister and Mischief, an interactive theater experience company, Andy and Jeff Crocker, stumbled upon the legend of KBLT while doing research for their next production. They immediately knew this was going to be it. But first they had to find Carpenter.

Andy, being a resourceful mother in the 21st century, had just the way to  track her down — she logged on to her Facebook mom group.

“I put in a message and was like, ‘Hey, does anybody here know Sue Carpenter?’ And I'm not exaggerating — within five minutes someone was like, ‘Here's her number. She's expecting your call.’ And then I called her up. She's still saved in my phone as ‘Sue Freaking Carpenter’ because I couldn't believe it was happening. But yeah, the power of the Facebook moms group,” says Crocker.

Now connected, Andy and Jeff began planning the 40 Watts experience, first putting it up down south with some help from The La Jolla Playhouse and finally making their way back to Silver Lake, where the show opened on 2/18.

I met the Crockers as they were ushering in the last group of the night not far from KBLT’s original location outside a tattoo shop on a trash strewn Silver Lake sidewalk.

What followed is supposed to be a bit of a secret, so I’ll just say that I, and the other four members of the group were led down some rickety stairs and into what felt like a time capsule from the late 90s. After our guide yelled: “It’s pirate radio motherf***ers!,” we popped on some headphones and heard a bit of narration that would guide us through the interactive experience.

We were in an apartment, pirate radio station and all, meant to mimic Carpenter’s former digs. Picture rock posters by Coop, handwritten DJ schedules from back in the day, CDs and crates and crates of records. For the next 90 minutes, we would get to experience what it was like to be a DJ on KBLT in their final days. 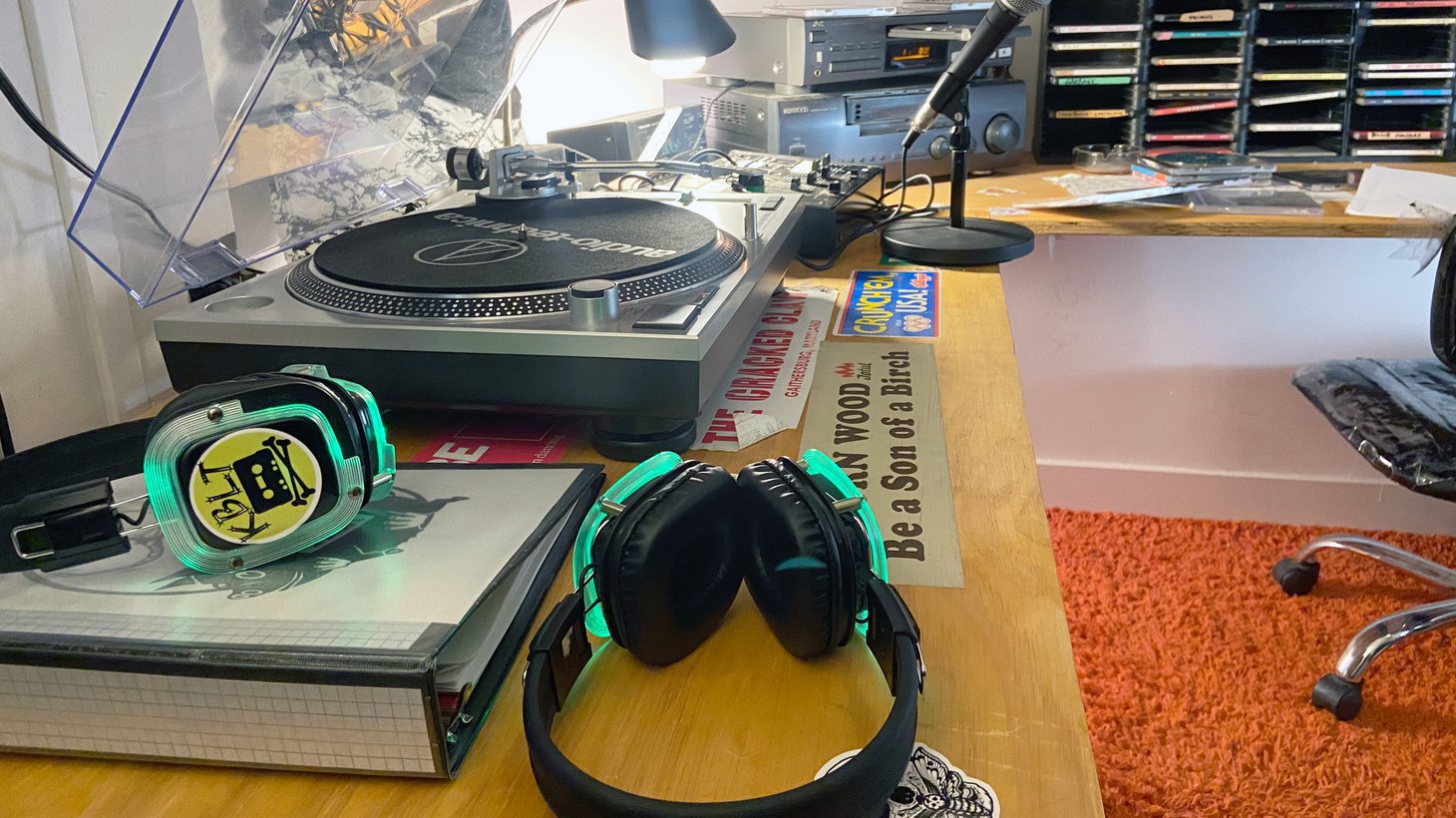 The 40 Watts experience is heavy on late 90s details and experienced through headphones handed out by the Crockers. Photo by Giuliana Mayo.

The 40 Watts experience has been selling out. Is it because of the recent resurgence of 90s nostalgia? People of a certain age, like me, who will never forget the first time they saw the movie “Pump up the Volume?” Former KBLT listeners?

Jeff Crocker says he’s seen all kinds of people come through, but one participant stood out.

“As he was leaving, he's like, ‘Oh, man, I lived in Silver Lake in the 90s. I loved KBLT. All my friends played at KBLT and they said they were going to bring me there. And I never got to go because it got shut down.’ This was his first time finally getting to do the thing that he'd always dreamed of. And that was something that I don't think either of us ever expected was going to happen. This was some sort of wish fulfillment for an urban legend that existed at a very narrow period of time. That was pretty cool.”

The inspiration for it all, Sue Carpenter has been known to pop in on occasion too, which has made for some memorable moments.

“I think my favorite story has gotta be when Sue came and played the show without telling anybody who she was. It was a group of strangers. One of them was Sue. And we got to watch someone mansplain how to use the console to Sue Carpenter. And of course, she's the coolest person so she was like, ‘Sure, man,’” giggles Andy Crocker.

The 40 Watts From Nowhere experience is running multiple times a night in its undisclosed Silver Lake location through February 5, for those who want to get their 90’s pirate radio fix.

The Pacific Opera Project aims to make the arts more affordable and entertaining. Their next show is “Superflute,” a retelling of Mozart’s “The Magic Flute” with Nintendo...

LA vocalist Amanda Achen never thought she would be singing songs written for a video game franchise. But she’s embraced the journey it’s taken her on.