The Los Angeles County Museum of Art was designed by William Pereira in 1965. Now four of the buildings at the museum are being demolished to make way for a new $750 million structure. Photo credit: Gunnar Klack (CC BY-SA 4.0).

The Los Angeles County Museum of Art (LACMA) is taking down four buildings to make room for a new $750 million* structure. Demolition began on April 6, and by Easter Sunday, the Leo S. Bing Theater was reduced to a pile of rubble.

Of the four buildings, the Bing was generally Angelenos’ favorite. It was the most intact inside. It held talks and screenings. It was designed in 1965 by William Pereira, a commercial architect and planner who was a Hollywood set designer. Architecture enthusiasts didn’t particularly love his vision initially, but then they gained affection for the restrained modern style.

The other LACMA structures being demolished include the Ahmanson and Hammer buildings (both designed by Pereira in 1960), and the 1980s Art of the Americas building (designed by Hardy Holzman Pfeiffer Associates).

With the demolition comes opposition, as KCRW’s Frances Anderton explains.

There’s been an outpouring of rage on social media, compounded by shock that the wrecking ball struck during the COVID-19 pandemic. Furthermore, despite the fact that this demolition has been signaled for several months, there is a sense of surprise that it has actually happened.

“Oh my god, I'd not focused on the fact that LACMA's 600-seat Leo Bing Theater, one of the best of LA movie showcases, was about to be demolished. What a shock.”

Turan reflects a general feeling that the Bing is the biggest loss. 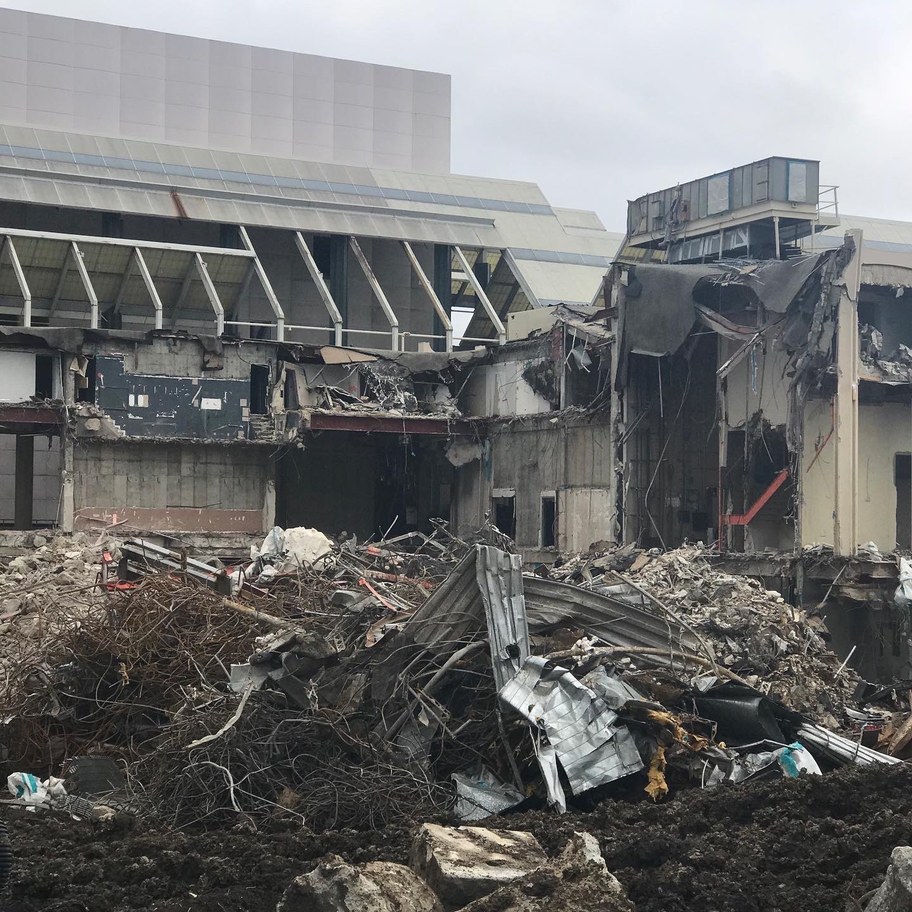 The current remains of the Leo S. Bing Theater, designed by William Pereira and opened in 1965. Photo by Frances Anderton.

Many construction projects have been on hold since the pandemic began. Does this mean rebuilding LACMA is considered an essential activity?

Yes. LACMA says, “Both the County and City of Los Angeles have declared building construction to be an essential activity, and the County has strongly urged us to continue moving forward in our work in the construction of our new building for the permanent collection.”

As with many construction projects, there is a complex schedule of operations, and loans are contingent on meeting time posts.

But to outside observers, there’s a feeling that this happened in the darkness of night, while critics of the new building were sheltering in place.

What about construction safety during COVID-19?

According to LACMA, workers from Clark Construction are following city, state and Centers for Disease Control and Prevention health guidelines related to the coronavirus. That includes keeping six feet apart when working, and frequently washing hands at portable sinks.

There have been recent efforts to stop the construction. Where do those stand?

Two citizen groups have been campaigning fiercely. The group called Save LACMA is still working to get a measure on the November ballot that would cap the county’s — ie, the taxpayer’s — financial obligation to the project, and call for a public member to attend board meetings.

Save LACMA argues that its board, made up of millionaires and billionaires, is carelessly putting a huge burden on regular taxpayers to pay $450 million** out of the $750 million cost of construction.

Save LACMA adds that county funding, including $117.5 million released last April, should be reallocated toward medical supplies for hospitals during the pandemic.

Ron Hollman helms Save LACMA. He said, “Sadly, LACMA is currently hurting the community rather than help heal it, which is not what an arts institution should do. Demolishing the Bing, and the rest of the original campus, at this time has been particularly heartless.”

But museum director Michael Govan has called the project an investment in the city’s future, saying it would be “an engine of job creation and economic recovery.” Govan says he expects up to 4000 jobs to be created for the project over the coming years, and it is almost 90% funded.

When will construction be completed?

Demolition is due to be completed this summer. The new building is scheduled to open at the end of 2023.

What did the public think of the buildings being demolished when they were newly constructed in the 1960s?

There was a mixture of excitement at having a grown-up museum to mark LA’s cultural maturity — and dismay among architecture enthusiasts at a seemingly missed opportunity to have a more adventurous Modernist building by Mies Van Der Rohe, who was in the running for the commission.

So this caps a long struggle over the future of this building? 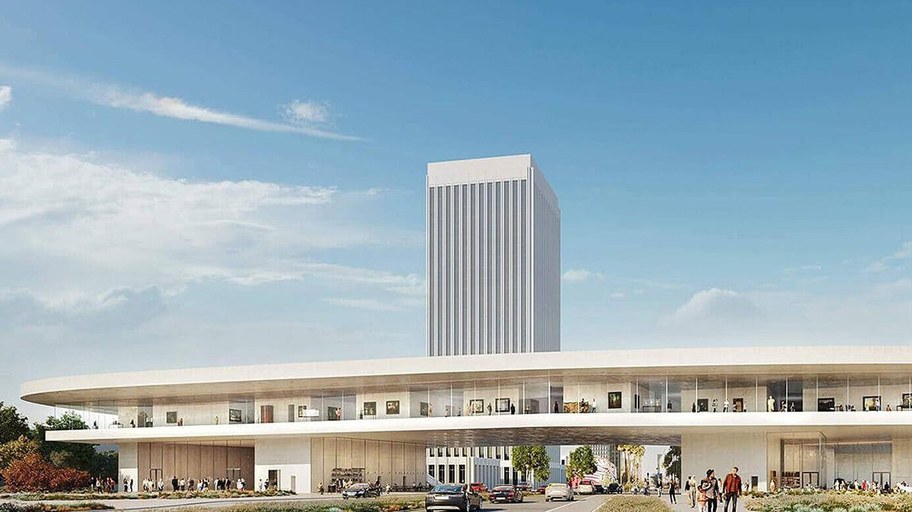 In late 2001, the LACMA board and its executive director Andrea Rich selected Rem Koolhaas from a limited competition to design an expansion of the museum.

His proposal broke with the brief given to the competitors, which was for a new masterplan and a retrofit of the existing buildings. He proposed tearing down four buildings — the Ahmanson and the Art of the Americas building — and replacing them with one structure.

Rem Koolhaas wound up losing the project. His strategy was later reprised by Michael Govan with his chosen architect Peter Zumthor.

Now demolition has started. We are another step closer to seeing that vision realized.

Since airing this report, we learned that the Citizens Brigade to Save LACMA, not to be confused with Save LACMA, has launched a pop-up design competition, inviting architects to propose alternatives to the Peter Zumthor scheme that will replace the four destroyed buildings. The group says it has received 26 submissions, and $10,000 will be divided between the winners, expected to be announced April 22. Curiously, the jury includes two people with very close ties to LACMA: former curator Patrice Marandel (who has been very critical of the Zumthor scheme) and Lauren Bon. Bon, artist and founder of Metabolic Studio at the LA River, is also daughter of the philanthropist Wallis Annenberg, who endowed Michael Govan’s director chair.

**LACMA also states that SAVE LACMA has inflated county contributions to the project, from $125M to $450M. The museum contends that Save LACMA arrived at the $450M figure through combining a county contribution of $125M with a $300M bond and $25M per year from the county for the museum's annual operating budget (unconnected to the building project). The museum says the $300M loan will be repaid through private philanthropy.

How social workers are doing their jobs online amid COVID-19

When LA’s “Safer at Home” order was enacted, Ava Moten was gripped by anxiety.

This week, the ACLU of Southern California sued the Department of Homeland Security over health and safety concerns at an ICE facility in Adelanto, California, where more...

The Los Angeles County Museum of Art (LACMA) is taking down four buildings to make room for a new $750 million structure. Demolition began on April 6, and by Easter Sunday,...