Gena Brooks works at several housing projects in Los Angeles and, when she walks around these neighborhoods, people greet her warmly even though she doesn’t live here.

“I can move in this place, in this community, being African American. And nobody — if I’m in my street clothes — knows that I'm the cop,” Brooks says as she waves to residents at Watts Empowerment, a community center in the middle of the Imperial Courts housing project. “My costume is part of one of the faces I wear. I'm a mother. I'm a Black female before I'm anything else.”

In this nationwide moment of reckoning for law enforcement, Brooks is part of a small LAPD unit that department leadership believe may represent a scalable model for 21st century policing. The LAPD calls it the Community Safety Partnership (CSP) program, and Deputy Chief Emada Tingeridies says its goal is to create a collaborative relationship between police and the communities they serve. 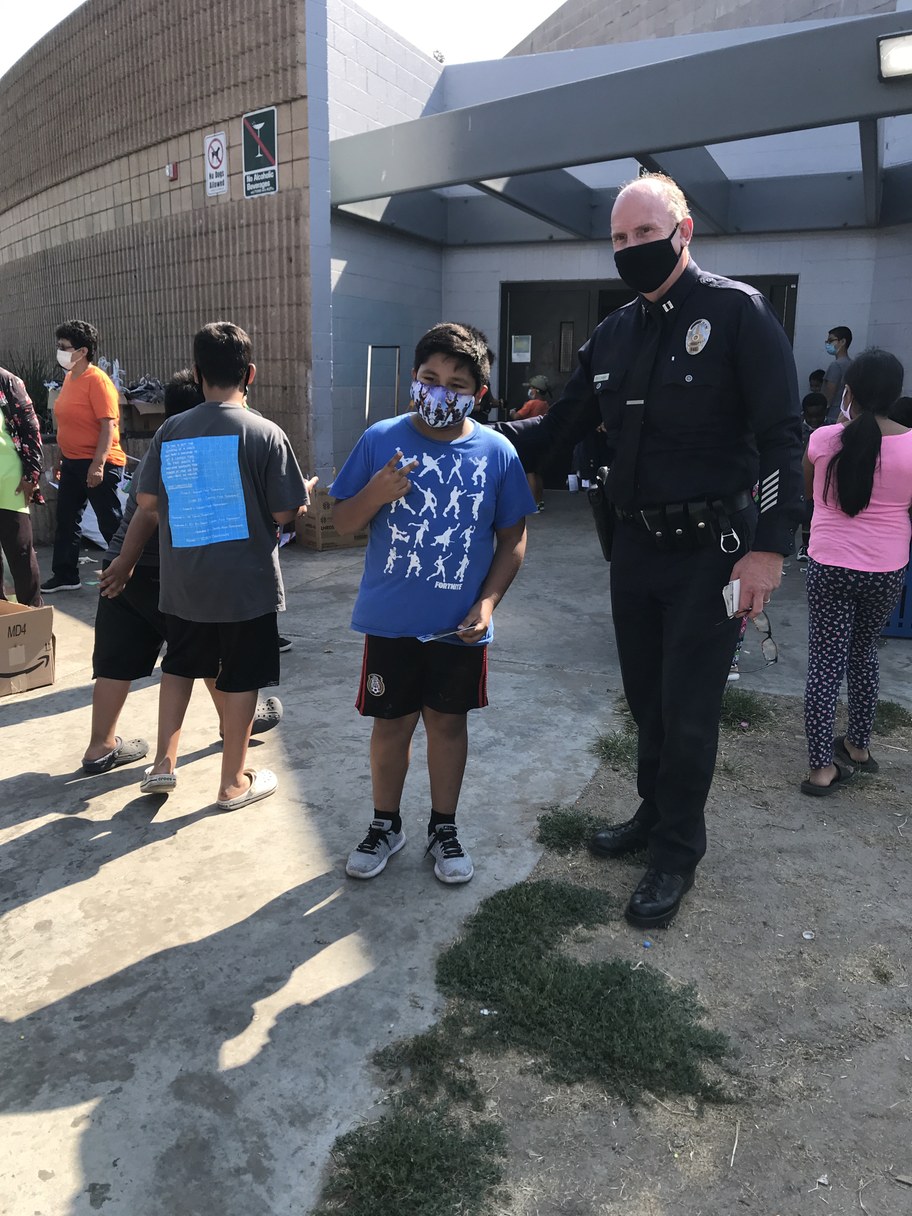 “We bring in community members to train. We bring in ex-gang members,” says Tingeridies, who was recently named the head of a new CSP Bureau. “We break bread and have lunch with the communities that the officers are going to be serving, and they really have this holistic approach and understanding of the community.”

Tingirides says crime falls when a community — especially those with histories of gang violence — have personal relationships with the officers that serve them. Her view was confirmed earlier this year in a study by the UCLA Luskin School of Public Affairs, which found that crime dropped in neighborhoods with CSP officers.

“Even in Los Angeles, as we've had record low crime rates, in the housing developments that had CSP [programs], crime went down even more,” says Jorja Leap, a UCLA professor who led the year-long study.

In fact, Leap and her team estimate 221 violent crimes were prevented by the CSP program.

Part of the way this works, Brooks says, is by empowering residents in housing projects, from Nickerson to Ramona Gardens, to serve as liaisons between cops and community. Juana Ortega, who lives in Imperial Courts, is one of those leaders and says she firmly believes in the CSP mission.

But not all residents feel the same and many civil rights activists fear the CSP program does little to solve what they call systemic problems with policing. Melina Abdullah, the head of Black Lives Matter LA, equates this style of community policing to picking the lesser of two evils.

“When all you're given as a solution to public safety is policing, then of course, you look for the most palatable form possible,” Abdullah says. “Our communities are quickly realizing that it's less important to know the names of deputies or officers than having community resources.” 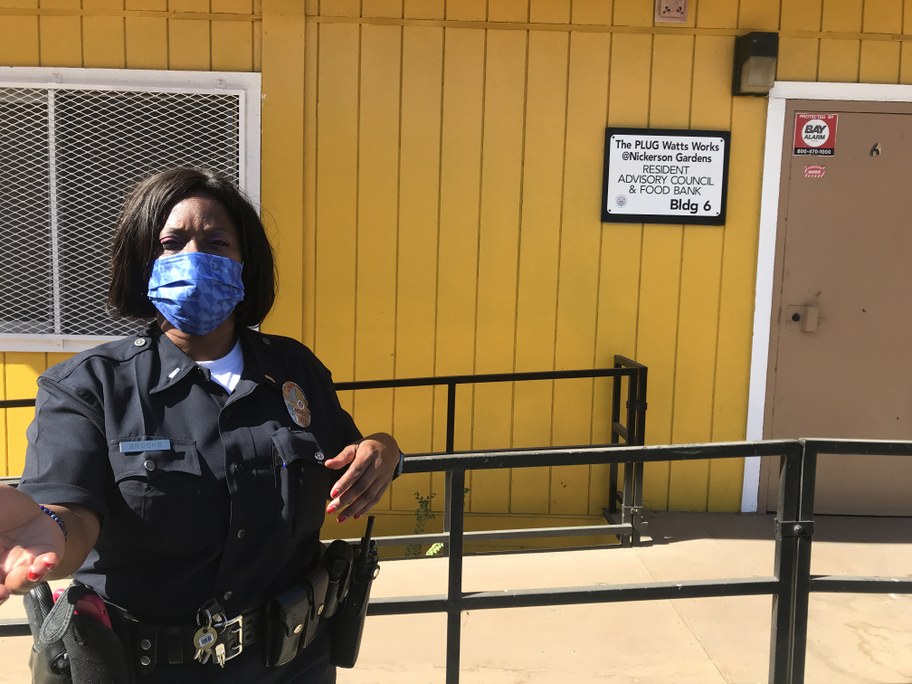 Abdullah has long advocated for defunding the LAPD and redirecting its roughly $1.8 billion budget to fund economic and social programs for LA’s underprivileged neighborhoods. In her mind, there is no reason for the LAPD to be involved in things like domestic disputes or public health.

Darren Stokes interns for a youth program at Nickerson Gardens. He says the CSP officers he interacts with behave differently than regular uniformed cops but the program isn’t the only solution.

“When there's no one just on the back of yo’ neck, you're more comfortable. You make more rational decisions,” Stokes says. “When you're being watched, that's when you start becoming paranoid and you just act on impulse.” 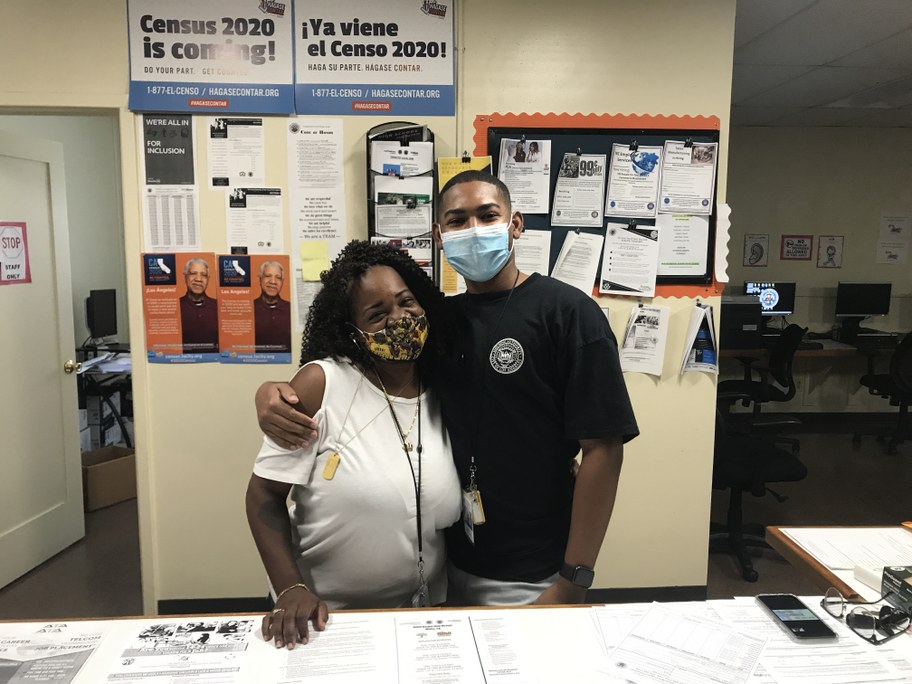 Darren Stokes (right), who works at Nickerson Gardens, says he understands why many residents of South LA are dubious the Community Safety Partnership program will mend the relationships with police.