How LAUSD’s classic coffee cake evolved and led to love Today we stroll down memory lane on Greater LA. The journey starts with a really yummy piece of coffee cake that reporter Danielle Chiriguayo brought into our office. She tells her story below.

If you grew up in the LA Unified School District, you and I might have something in common: an appreciation for the LAUSD coffee cake.

I couldn’t stop thinking about it after recently strolling down memory lane.

So I did a social media search and realized I wasn’t alone:

I think about how that old school LAUSD coffee cake really slapped sometimes.

I decided to track down some kindred spirits -- from Apple Valley to Marina Del Rey.

She walked me through the baking process, and informed me that the cafeteria at Marina Del Rey is among the few that still bake coffee cake from scratch.

Or as “scratch” as possible. The majority of the mix now comes in pre-packaged bags to streamline the baking process. 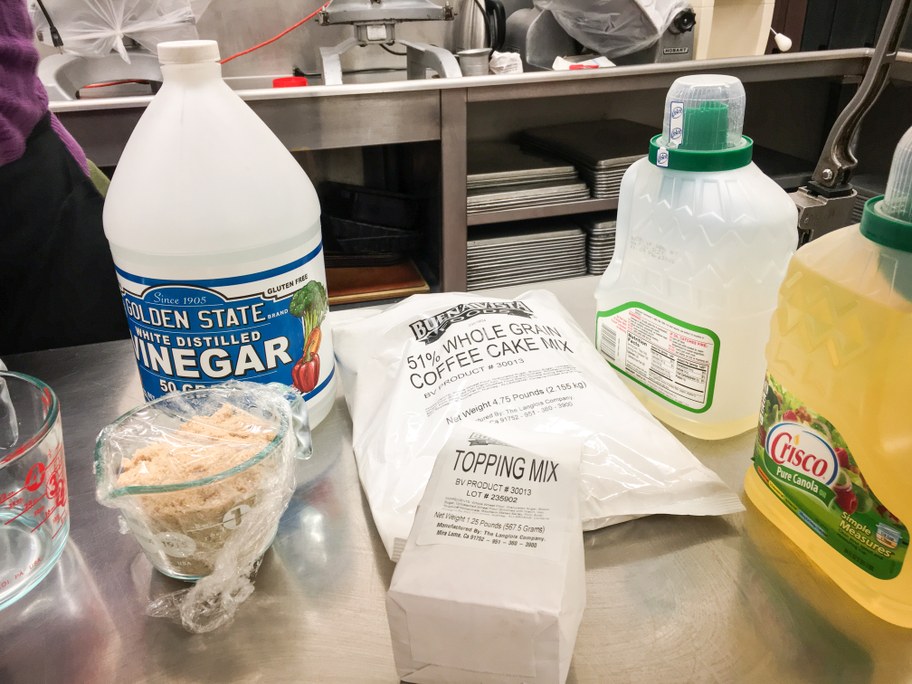 Today’s coffee cake is made from a pre-packaged mix. Credit: Danielle Chiriguayo

Rewriting the recipe for 2020

The earliest documented recipe is from 1954, according to LAUSD nutritionist Ivy Marx.

“Over 60 years ago, we weren’t concerned -- not so much -- about obesity, high blood pressure … and the nutrition standards weren’t very strict,” Marx said.

With today’s recipe, one serving contains about a fraction of the original calories, 5 grams of fat, and 2.5 teaspoons of sugar. It’s made with whole grain flour.

Over the decades, healthy-eating initiatives have changed what foods are served at LAUSD schools. But the coffee cake still reigns supreme. On days when it’s served, more students get in cafeteria lines across the region, according to LAUSD metrics.

It’s run, in part, by East LA native Eliseo Montoya. But he wasn’t an LAUSD kid growing up. He went to a local Catholic school.

And yet, the coffee cake was a mainstay throughout his childhood.
Some days growing up, his mom would send him across the street to Belvedere Junior High to buy slices of the cake. It’d be a treat for the family.

About 10 years ago, as Montoya explained, he was at a crossroads. He felt nostalgic for his school boy days. So he went on Facebook to look for his junior high flame, Sonia Fregoso. He was neighbors with her, and they saw each other daily.

“I saw her walking, a big old smile and everything, and [she] just caught my eye. And we flirted and she picked up on me. She [was] flirting with me and winked at me. And I was just an innocent Catholic school boy,“ Montoya said.

As they began to reconnect, he learned that Fregoso made LAUSD coffee cake.

As time passed, Montoya and Fregoso ended up back together. They even got married.

But they ran into financial problems, couldn’t find work, and were facing eviction. Montoya collected cans on the streets. Some days, he made $20. It wasn’t a lot, but it was enough to buy a few burgers for his family.

Then a family friend of theirs had an idea. Why not sell the coffee cake?

“So I went on Facebook and took a picture of the coffee cake. And we had a great sale. We didn't make a killing, but we were able to eat and help pay rent and keep our head above water. We did that for a couple of months. And just to the graciousness of our friends and their friends ... it was a life-saving moment for us,” Montoya recounted.

Today, the Montoyas are out of the financial red zone. They do the bake sales if they need a little extra cash, or when there’s a special occasion or holiday.

Find out why @radiochio and @bigdanimals are making the classic LAUSD coffee cake at work. Plus, we've got the recipe for you 😉
MORE ➡️ https://t.co/5tfM5ukyJX#GreaterLA pic.twitter.com/Fw3CTLpdtn

Combine the first six ingredients. Mix until crumbly. Reserve ½ cup of the above for topping. Add the cinnamon. Combine the last four ingredients and add to the first mixture. Blend together, but do not over-mix.

How LAUSD’s classic coffee cake evolved and led to love

If you grew up in LA, you may have fond memories of LAUSD's coffee cake. We've got the original 1954 recipe for you here.

Governor Gavin Newsom delivered his annual State of the State speech today. A lot of it focused on fighting homelessness. LA County saw its homeless numbers jump to nearly...

A dedication of the newest phase of downtown LA's historic walkway

The Plaza Historic District, or El Pueblo Historical Monument, is the oldest section of the city.