‘All of us got it. No one was spared.’ LAUSD teacher changed her mind about in-person classes during COVID When Jordi’s mom, Carla Suarez Capdet, pictured him starting school, she didn’t imagine him on a laptop at home.

“Like most parents, you have this kind of idealized version of what your son’s first day of kindergarten will look like with an oversized backpack and lunch pail and none of that happened,” she says.

Neither did the individualized education program (IEP) that LAUSD granted him. His IEP includes a special day class and time with neurotypical kids every day. Instead, it’s just squares on a screen.

“Really the majority of his day is just an hour or so of Zoom, and then [the] rest of the time is supposed to be asynchronous, which is kind of independent work. So you can imagine how independent work must look like for a child who’s 6 years old, minimally verbal, and has moderate to severe autism.” 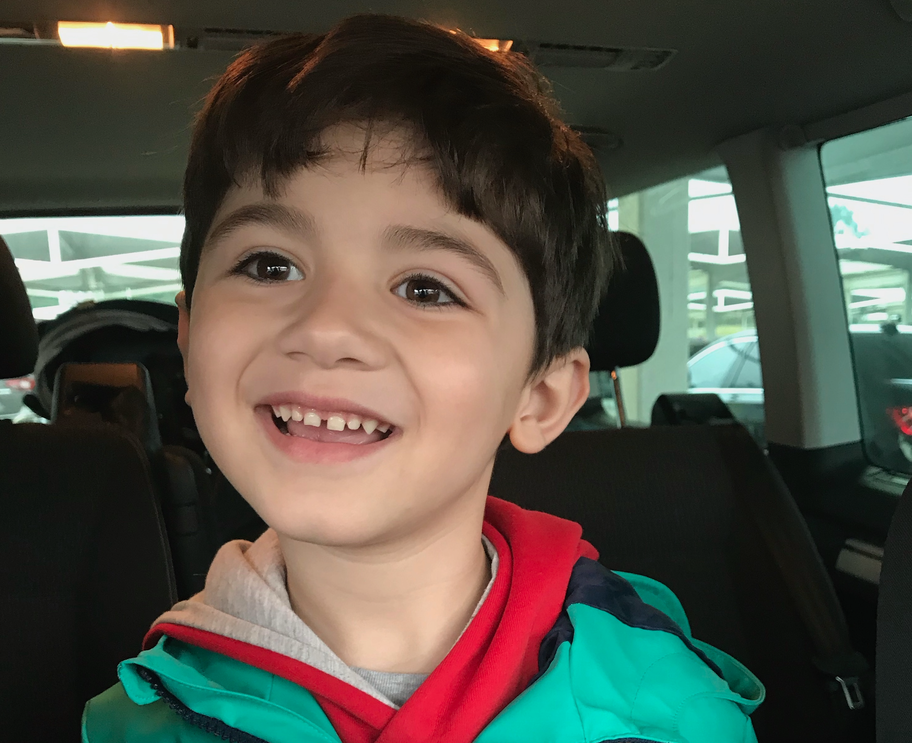 Capdet knows what Jordi’s missing out on. For just five days in the fall, he went to school on campus. That was when schools were open just for some kids with special needs.

“When he met his teacher, he was just over the moon, he was bouncing all over the classroom, he was shouting out letters. ... He was so excited that when we got back home, the only thing he could say was, ‘Drive Mr. M,’” she recalls. “It was amazing just to see him light up and be excited about learning. He needed that in-person connection.”

Then there was a surge in cases, and LAUSD Superintendent Austin Beutner shut down campuses again.

“So when we saw him on that fifth day, I knew we weren’t going back to campus but Jordi didn’t. So later that week he was just devastated, sobbing, and he grabbed his iPad, and he went into Google Maps, and he literally drove himself to school,” she says. “He didn’t put in the address because he doesn’t know where his school is, but he knows the route and he had memorized it in those five days. And he literally drove himself to it and zoomed down to his classroom and said, ‘Mr. M,’ and pointed at it, and my heart just broke.” 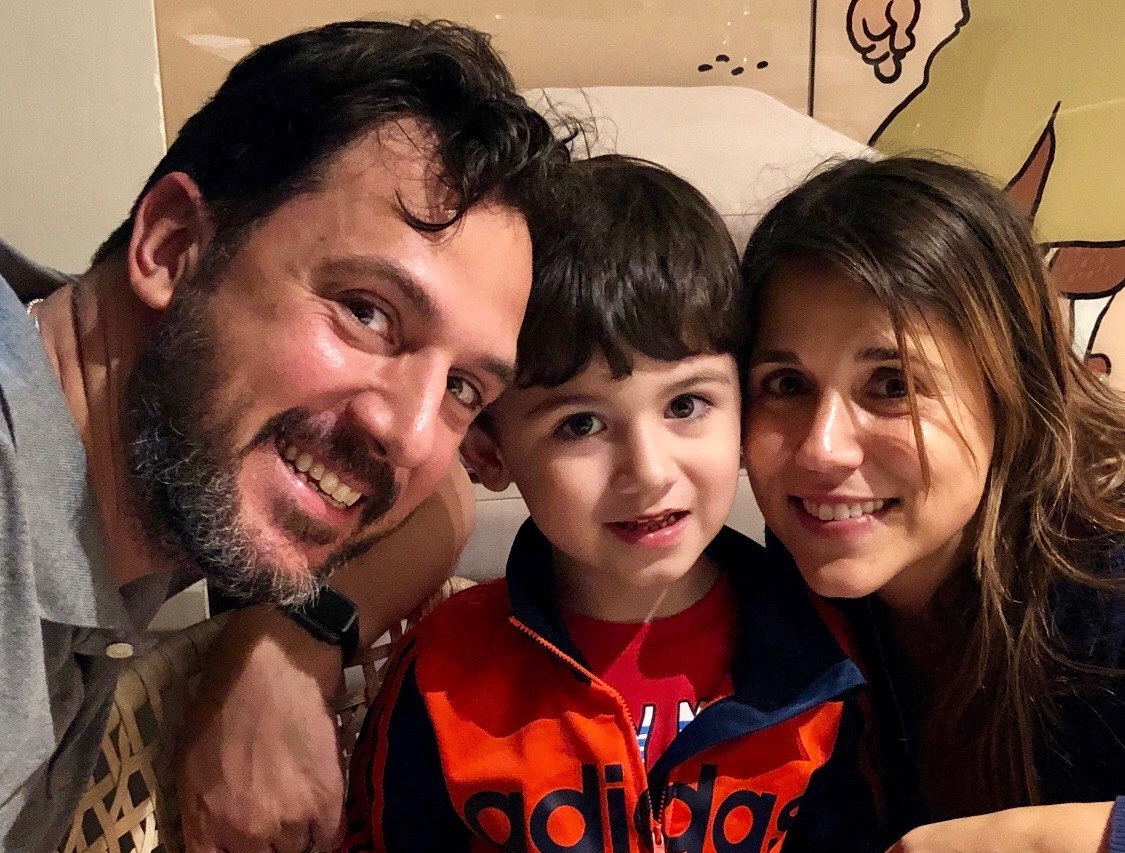 Capdet believes kids like her son need to be back in the classroom. Now case rates are too high for that. But even when they were lower, the LA teachers’ union, UTLA, strongly opposed reopening. And Capdet says they keep moving the goal posts. First they demanded PPE and safety protocols, then HVAC updates, then COVID testing and contract tracing. Now the demand is vaccinations for all school staff and lower case rates.

UTLA secretary and bargaining co-chair Arlene Inouye says it’s not safe for teachers, and it’s not their fault the cases keep surging. State and county officials have reopened lots of public spaces that have kept COVID rates high. “Don’t put it on educators to open up our doors when you have made really poor decisions that have made it worse,” she says.

Plus, the state has been inconsistent about what safe levels of COVID transmission means. Gov. Gavin Newsom announced last month that counties need to demonstrate a case rate of 25 per 100,000 residents before they can reopen elementary schools. No Southern California county is even close to hitting this metric right now.

But before the most recent surge, the requirement was seven cases per 100,000, or less than a third of the new allowable spread rate.

And this time, Beutner agrees with the union. “It's hard to be confident we’re somehow safer today than we were back in December, when health authorities told us similar virus levels put us in dire straits,” he said in a video streamed this week. “If schools are truly a priority, why are malls and card rooms being allowed to reopen when the LA area is nowhere close to meeting the state standards for schools to reopen?”

LAUSD parent Tunette Powell also doesn't like seeing businesses reopen while schools stay closed. She says education is just as essential. She lives in Hyde Park and has a kindergartener, a fourth grader and a sixth grader learning remotely. Meanwhile, she works in-person at a private elementary school.

“We’re not thinking about how we do this and do this well,” she says. “[They’re] like, ‘We don’t care about teachers.’ Do we care about grocery store workers who haven’t been able to go home? You know what I mean? Do we care about health care workers? Like on and on and on. Education is extremely important.”

Some schools in LA County have been open during the pandemic. Las Virgenes Unified, which serves affluent cities like Calabasas and Agoura Hills, was the first in the county to bring back kids up through second grade in early November.

But LA Unified predominantly serves students of color, and more than 80% of them live below the poverty line — two groups disproportionately affected by COVID-19. The district recently reported last month that one in three students from several low-income neighborhoods who were tested at district-run sites were positive for COVID-19. 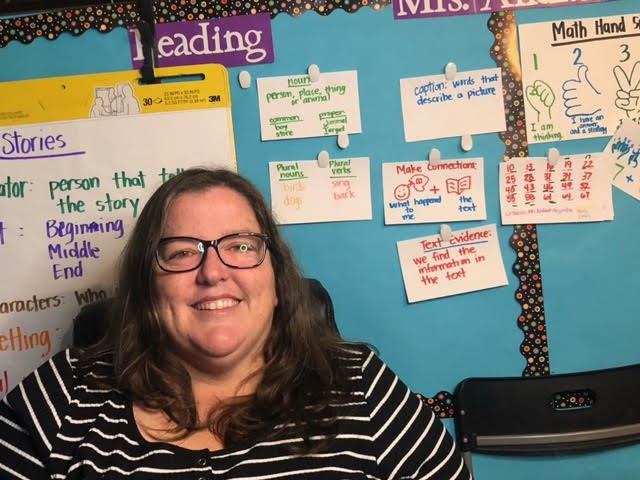 Bridget Andrade bought a cubicle and set it up in her garage to create a backdrop while she teaches her first graders virtually. Photo courtesy of Bridget Andrade

Bridget Andrade teaches first grade at Avalon Gardens elementary in Willowbrook in South LA. At first she was eager to send her kids back to school, but her personal experience with COVID changed her attitude. Her husband is a teacher, and she’s got three kids in elementary, middle and high school. Right now, her whole family is infected with COVID.

“I said no matter what, we’re going to go back to school when schools open. But now I don't know that I feel that way because I realize the risk. My kids [are] going to school. They have three schools they’re going to. They’re being exposed to all the kids that are in their class, their teachers. And then they’re bringing that back home to my husband and I. And we’re exposing whoever we come in contact with. And if I go to my school and my husband goes to his school, and he’s exposed to his students and I’m exposed to my students, and then we all come home to the same house, we’re sharing five schools’ worth of exposure.”

Her father’s in the hospital, her mother-in-law just came home from the hospital, and all three of her kids experienced severe symptoms. And she says protocols like temperature checks aren’t good enough. None of her kids ran a fever.

“It just made the reality of how contagious it is … more real to me because all of us got it. No one was spared. And I just keep thinking, ‘Okay I teach, I know how kids are.’ Kids do not maintain social distance,” she says.

Andrade has all the frustrations of other parents. Her three kids have ADHD and they’ve all suffered academically more than the average child, trying to focus on Zoom all day long. One of her sons was hospitalized with mental health issues stemming from the stresses of COVID-19. And even with that, she doesn’t want them back in classrooms yet.

Andrade doesn't expect to be back this school year. Until it’s safer, she plans to keep teaching her kids from the cubicle she bought and set up in her garage, adorned with the same bulletin boards that line her empty classroom.

COVID or no in-person school for a year: What’s more dangerous?

‘All of us got it. No one was spared.’ LAUSD teacher changed her mind about in-person classes during COVID

LAUSD says COVID case rates are too high and school staff must be vaccinated before in-person classes resume. It wasn’t until one teacher and her children got COVID that she...

Use this pediatric COVID calculator to measure back-to-school risk

An interactive calculator estimates, for any county in the U.S., the likelihood that a group of asymptomatic children will contain at least one child with COVID-19.

‘Just because something opens up — doesn’t make it safe,’ says doctor on reopening of economy

“If you’re going to decide to go to a restaurant, make sure they are adhering to social distancing, I would say at least 10 feet, and make sure that it isn’t very crowded. …...