Music venues in LA are closed due to the pandemic, so artists have been performing online and at other creative places.

“We've been looking for places to play because musicians, especially that play jazz like us, get a lot more out of it when we're playing live,” says Ken Weiner, a 47-year-old saxophonist and tech worker.

In summer, Weiner was getting antsy being cooped up in his house, not playing live music with friends and a crowd.

He thought of using a Zoom-type service to perform with friends. Ultimately, he says, “It's just not the same as being in the same room or being outside together.”

Then one day when Weiner was riding on the Ballona Creek bike path toward Marina Del Rey, he spotted an empty stage alongside it.

“I ride my bike by this bike path often, and I saw this stage here that no one ever uses. So I figured, hey, why not set up the band here and just play for the bikers?”

Now Weiner and his non-electric (the outdoor stage has no outlet) jazz band perform there every Sunday at 4:30 p.m. 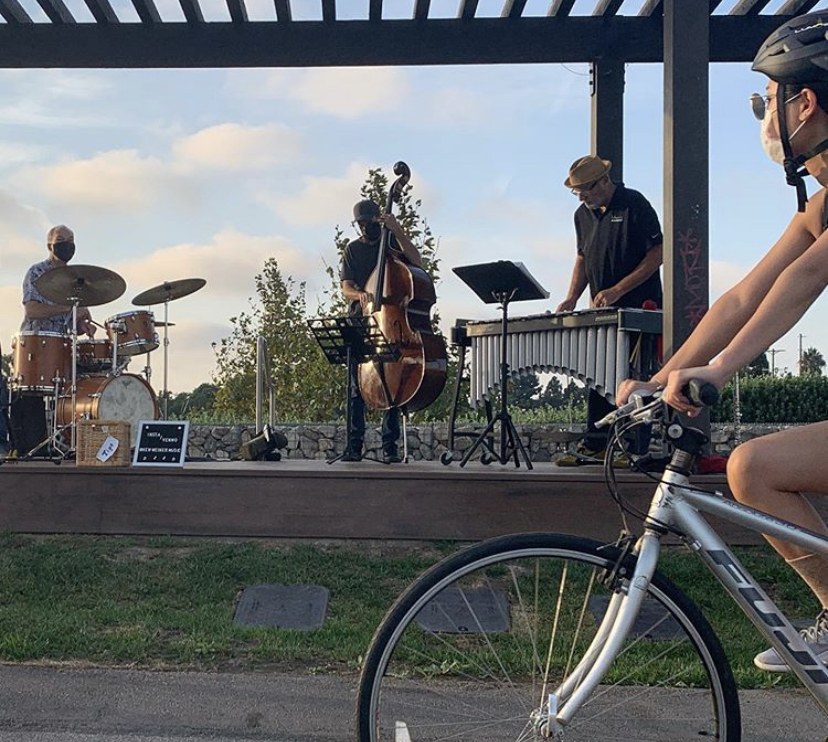 Ken Weiner and his jazz band perform as a cyclist rides by. Photo courtesy of Ken Weiner’s Instagram.

“Outdoors isn't too bad, we can maintain our social distance,” he says.

Another musician getting creative is Raquel Rodriguez. The 32-year-old singer has opened for Lizzo, shared the stage with Gwen Stefani, and was booked on a tour and festivals overseas this year before the pandemic hit.

She was also hosting large backyard performance sessions pre-pandemic, with 80-100 people. That included clients, other musicians and close friends.

Now she’s taken those sessions to the front of her View Park home.

“One of our neighbors actually came to us [with the idea],” Rodriquez explains. “I was just in the front yard and she drove by and was like, ‘Hey, would you guys be interested in throwing a concert for your neighbors? We would love to hear you.’”

Now she and her labelmates regularly host a concert on her front yard, with neighbors setting up blankets and chairs to watch. Sometimes Rodriquez and her neighbors can’t help but feel the music.

“Everybody's wearing a mask, pretty much staying in their own little circles and dancing in the middle of the street. It's pretty cool. Every time a car comes by, they slow down and they're like, ‘Yeah, this is awesome.’ And we're like, ‘Get out of the way! We want to dance!’”

Though she’s found some joy, Rodriquez admits the pandemic has been tough on her, especially financially. Luckily, her fans help by buying merch and sending money when things get tight.

The mariachis in Boyle Heights, for instance, performed just about anywhere and everywhere before the pandemic — indoors, outdoors, at quinceaneras and weddings.

“Before, we could work six to seven hours a day. But now we're lucky if we work even two because most of the time, we’re not working at all,” says Isidiro Valdez, a mariachi with 30 years of experience.

He’s 66 years old and never seen his line of work this bad.

On weekends, he gets to Mariachi Plaza around 10 a.m. and waits for work. Sometimes he waits until 5 p.m., if he gets any work at all.

This is his only means of income. He says he’s stayed afloat with government assistance. He’s relying on those funds until they run out.

South LA has a new luxury tower with $3100 rents. Why are there no affordable units?

A few years back, developers had an idea: Take a piece of land south of the 10 freeway that was occupied by a radio station cluster, and build a 30-story, fancy glass...

Bobby “Boris” Pickett was an aspiring actor in LA when he recorded "Monster Mash" in 1962. It spent the week before Halloween that year at the top of the charts, and it’s...