A little over three years ago, the County of Orange hired its first “homeless czar” to oversee developing strategies (including an emergency shelter system) to tackle a growing homeless population. In that time, the homeless population has risen from around 4,500 in 2017 to 7,000 in 2019. Photo by Jesse Hardman.

Orange County’s homeless population has risen to 7,000 from from 4,500 two years ago.Anti-camping ordinances in the county mean they can get fined for sleeping in their cars on the street. But a federal court decision, which the Supreme Court let stand just this morning, says those anti-camping laws cannot be enforced if there aren’t enough shelters for people to use instead.

So county officials have been scrambling to turn old bus stations, motels, warehouses and other spaces into shelters. They’re basically constructing an Orange County shelter system from scratch.

ACLU researcher Eve Garrow says those shelters are great, as long as they’re truly used for short-term emergencies. But she warns that a few weeks at an emergency shelter can turn into months without the right social service assistance. Those months can be traumatizing -- in some cases even more than living unsheltered.

“There's no research to suggest that people's health, wellbeing and mental health improves when they live in shelters. In fact, it deteriorates. Because living with 200-400 other people sharing the same space can be extremely stressful,” Garrow says.

Four years ago, there were no county-funded year-round homeless shelters in Orange County. Now there are three. Contentious debates led to some being put in isolated areas.

Garrow released a report last spring that called out three OC shelters, including Bridges at Kraemer Place, for unsanitary and unsafe conditions. “Staff in these emergency shelters can be quite abusive. They can be verbally abusive. Sometimes they engage in sexual harassment. Sometimes they'd neglect people with disabilities or people who are very ill,” she says.

Larry Hynes, executive director of Mercy House, which manages Bridges, says in an email statement that Garrow’s report doesn’t accurately depict the shelter. But he says his organization has used the ACLU investigation in a “constructive way” to make sure the organization is “providing client-centered shelter and dignified housing.” Hynes adds that an internal review has “confirmed our belief that Bridges at Kraemer meets our standards and our mission.”

Callie Rutter has been living at Bridges since last March. She’s juggling a job search with chemo treatments for cancer. She says it’s hard to stay healthy in her shelter. She describes that it lacks bathrooms and showers, and serves sugar cereal, Cheetos and frozen vegetables. 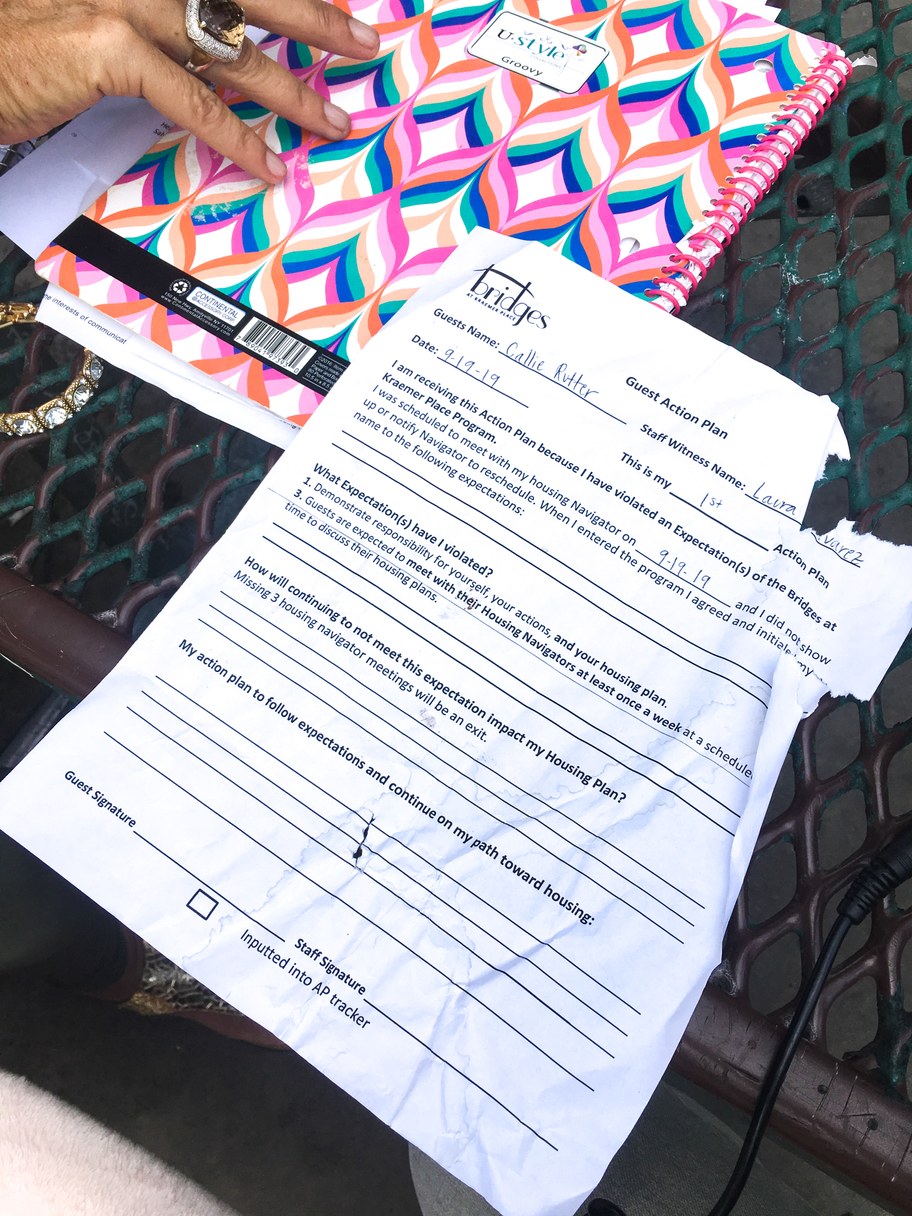 Orange County homeless resident Callie Rutter shares a disciplinary writeup from staff at the Bridges at Kramer Place shelter. She said she was reprimanded by the shelter for missing a meeting while she was at a medical appointment for her cancer. She claims policies at the shelter are often punitive. Photo by Jesse Hardman.

Susan Price, the outgoing head of Care Coordination in Orange County, says she’s been working on a standard of care document for shelters in OC. But as she gets ready to leave her job, she’s worried that short-term solutions, like shelters, are too much of the focus. There’s still no long-term strategy for housing Orange County’s homeless.

“Folks that are currently experiencing homelessness don't have good credit backgrounds, can't compete in the market on, you know, three times the rent to move in and things of that nature. So it's hard. It's hard to overcome those barriers,” Price says.

Catherine Moore, a 48-year-old mother of three, used to live at a shelter called La Mesa. Her slide into homeless started a decade ago. She left an abusive marriage, and with no support network to fall back on in California, the Rhode Island native wound up on the Santa Ana riverbed. She became addicted to speed. It helped her stay alert at night. She wound up at La Mesa transitional shelter, which reminded her of a stint in county jail.

Entering her 10th month in an emergency shelter, with no promise of any affordable housing, Moore was restless. So she emailed some of her shelter complaints to the head of the organization that runs the space.

Then she got housing. Now Moore lives in a one bedroom apartment in a converted motel. 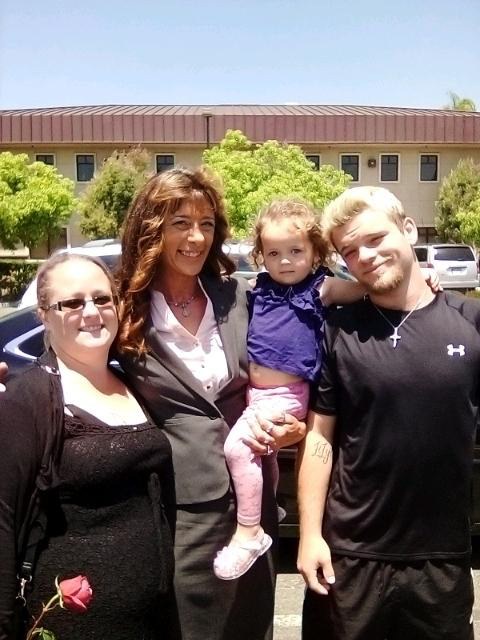 Catherine Moore (second from left) has been homeless in Orange County for the better part of the past decade. She poses with her son Logan, granddaughter Lily, and Lily’s mom Kristi.  After spending 10 months at La Mesa emergency shelter, Moore was placed in a housing incentive program, and got a small apartment in a converted motel. Photo by Jesse Hardman.

A judge ruled that Orange County cannot arrest people for sleeping in public spaces if there are no alternatives. So the county has been creating shelters out of bus...

A civil war is brewing in the OC GOP

Orange County used to be the bedrock of the Republican party in Southern California. But the party is facing an existential crisis.

Tis the season of going to a parking lot full of Christmas trees to haggle with a vendor and bring home a tree. But where do LA’s Christmas trees actually come from? The...