San Gabriel Valley restaurateurs are determined to make their businesses work, even with mounting losses Jason Tsai, owner of Popping Yoke, sits inside his empty dining hall on Main Street in Alhambra. The restaurant has been holding on during the pandemic despite a reduction in profits, but the suspension of indoor dining could be devastating. Photo by Benjamin Gottlieb.

Jason Tsai knows what it’s like to have his business stifled by the pandemic.

“Popping Yoke is a brunch spot. It’s not designed for to-go, so it wasn't really working,” Tsai says while sitting in the back patio of his restaurant on Main Street in Alhambra. “Nobody is coming over here for an egg benedict to-go ... or a mimosa to-go. They want dining.”

In-person dining of all kinds is on hold right now in LA as COVID-19 cases spike statewide. But giving up just isn’t in Tsai’s DNA. He came to the U.S. from Taiwan as a teenager and says he’s determined to make his businesses work even with losses mounting.

Tsai also has an advantage. He’s been able to keep this brunch restaurant open by leaning into other concepts he runs, especially his donut and ice cream stores. 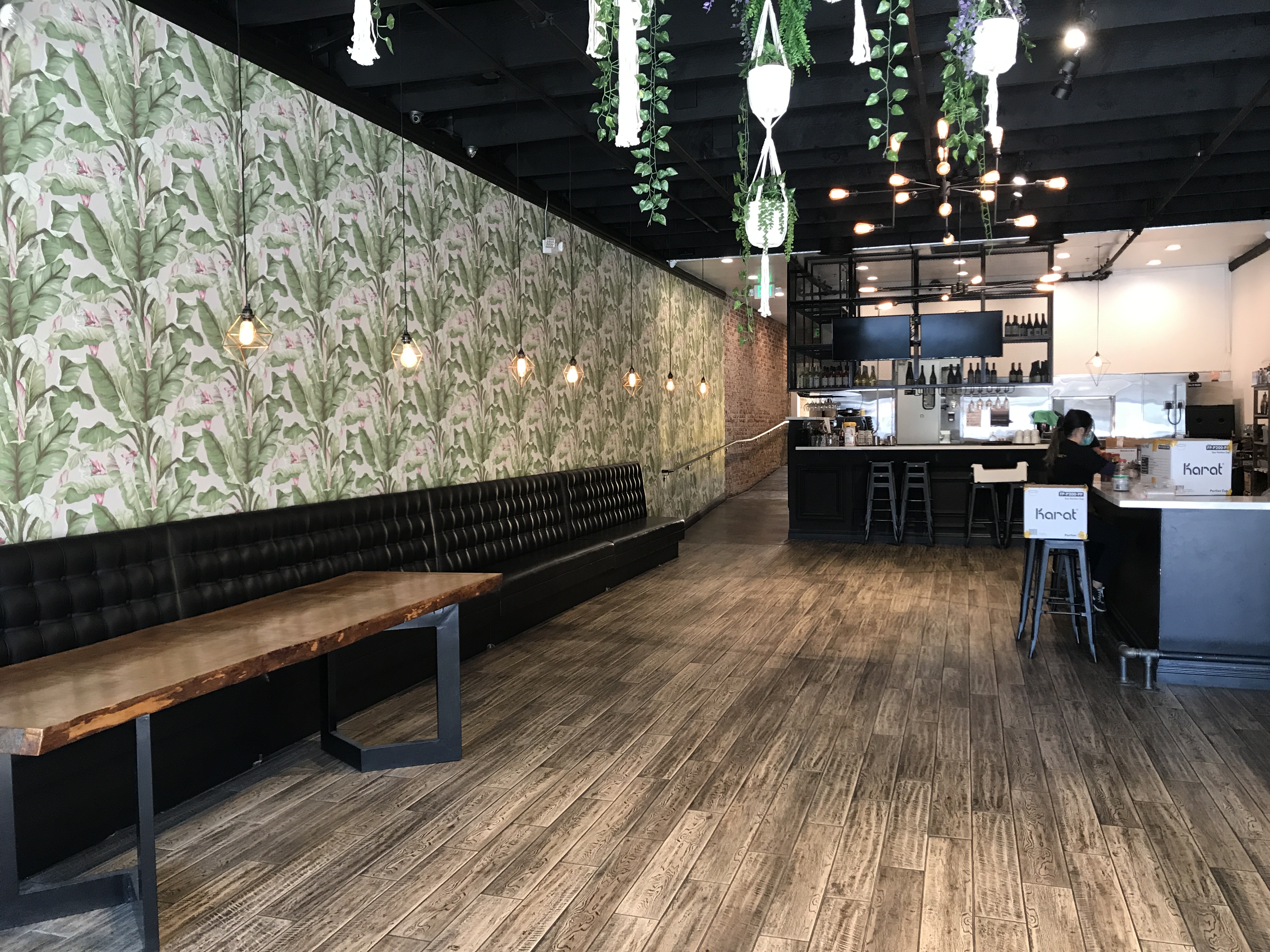 The dining room inside Popping Yoke sits completely empty due to restrictions in LA County regarding indoor dining. Photo by Benjamin Gottlieb.

“My business for donuts actually went up,” Tsai says. He owns Dot & Dough, with three locations including in Monterey Park. “Because donuts are easy … people just park and grab a box of donuts and leave, or order on UberEats or Postmates.”

Tsai’s story exemplifies the challenges restaurateurs are facing in the San Gabriel Valley. Owners that are able to adapt to takeout and delivery-only dining — or leverage some locations over others — are surviving.

Those who can’t face a sobering landscape, one that could lead to mass closures of small businesses, says Jot Condie, the head of the California Restaurant Association.

“Our prediction was probably about 30% of restaurants [in California] would never open back up again. Now, it's likely to be far north of that. ... In parts of Los Angeles, San Diego, the Bay Area, the numbers are likely to be much higher around 50%,” says Condie. 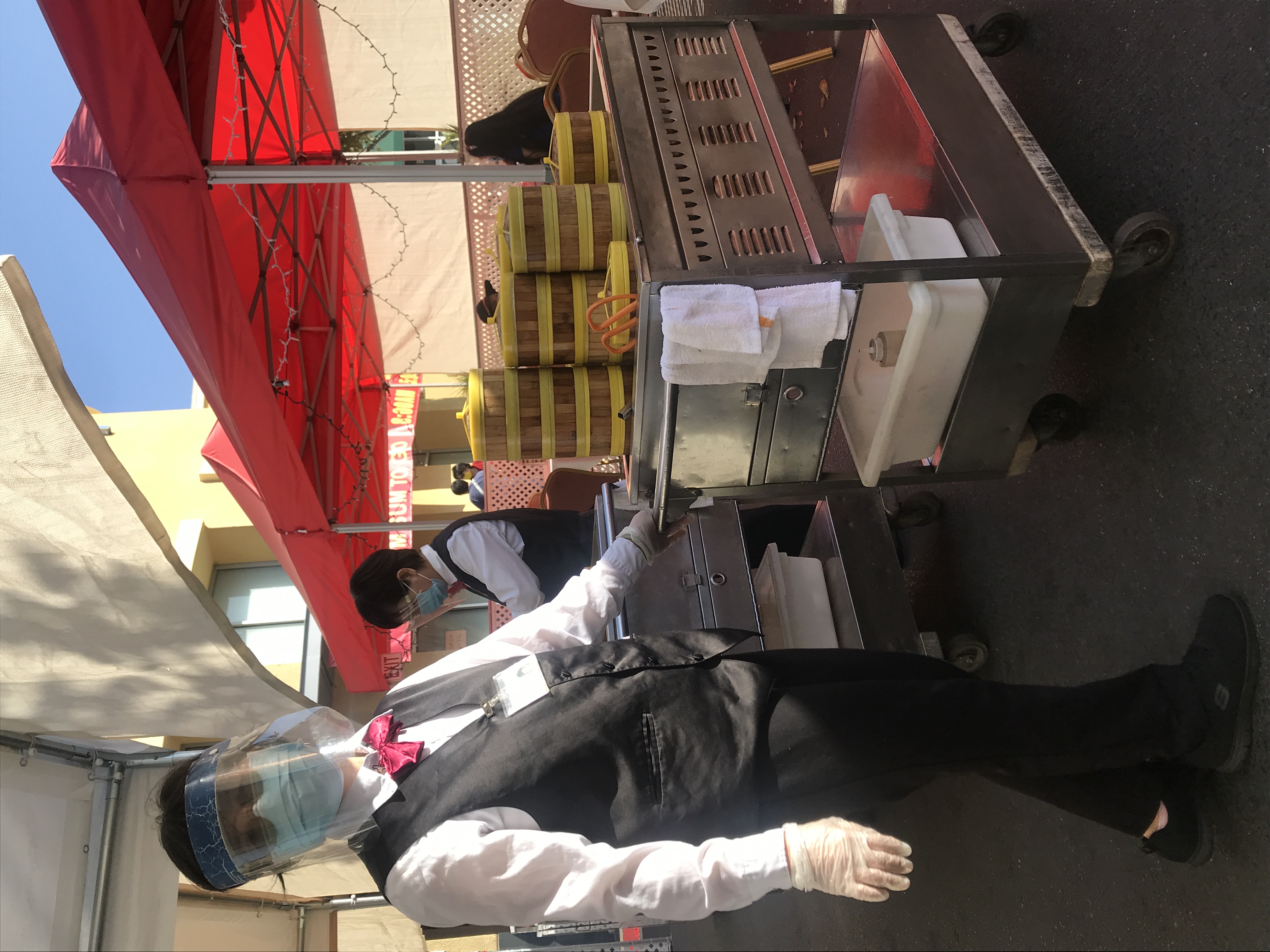 A waiter on the last day of outdoor dining in Los Angeles pushes around a metal cart carrying dim sum at NBC Seafood in Monterey Park. Photo by Benjamin Gottlieb.

Some eateries just aren’t suited for the pandemic.

Take NBC Seafood on South Atlantic Boulevard in Monterey Park, a long-standing dim sum spot that serves Cantonese favorites. The owners rely on their big banquet halls and large, round tables to keep bills and staff paid. Many actually were struggling before the pandemic hit, says Genevieve Ko, a senior editor with The New York Times cooking section.

“A lot of these other large [dim sum] restaurants actually closed even before COVID,” says Ko, who grew up nearby. “For places like this, where a lot of the dining is both intergenerational, but also veer[s] on the older side … I'm not sure that we'll see them come back.” 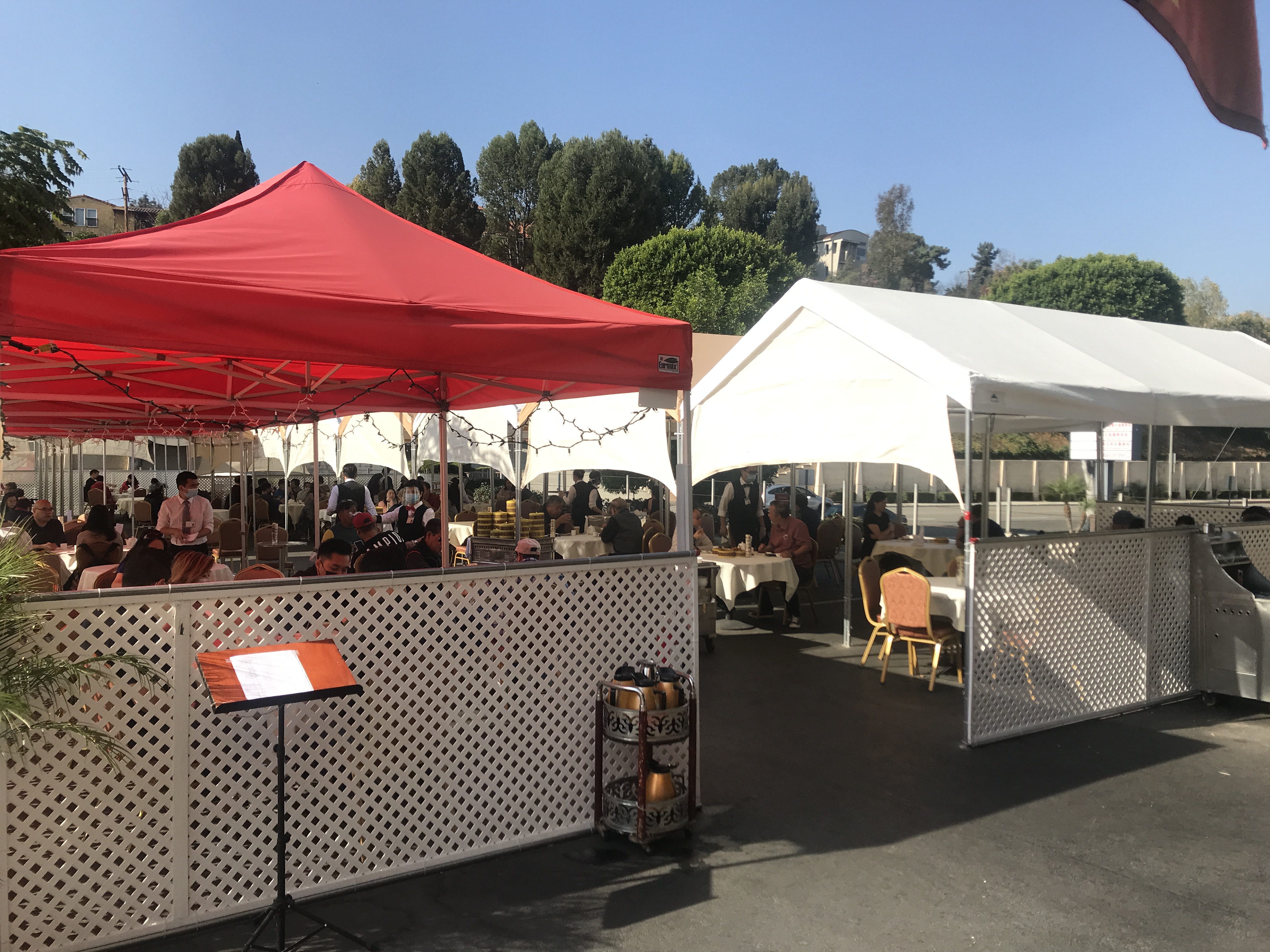 Outdoor dining at NBC Seafood did not come close to generating the same amount of business as eating inside, but it has been enough to keep the place open. Its future now is uncertain. Photo by Benjamin Gottlieb.

For the vast majority of restaurant owners in the San Gabriel Valley, however, their future hinges on support from regular customers. That’s certainly the case at Jiang Nan Spring, a Shanghai and Sichuan-inspired restaurant serving traditional Chinese recipes.

Henry Chang and his wife Frances own the place, which recently was put on the California Michelin Guide.

“Before the pandemic, the majority of our business was about 75 to 85% indoor dining,” Henry Chang says, with his daughter Kelly translating. 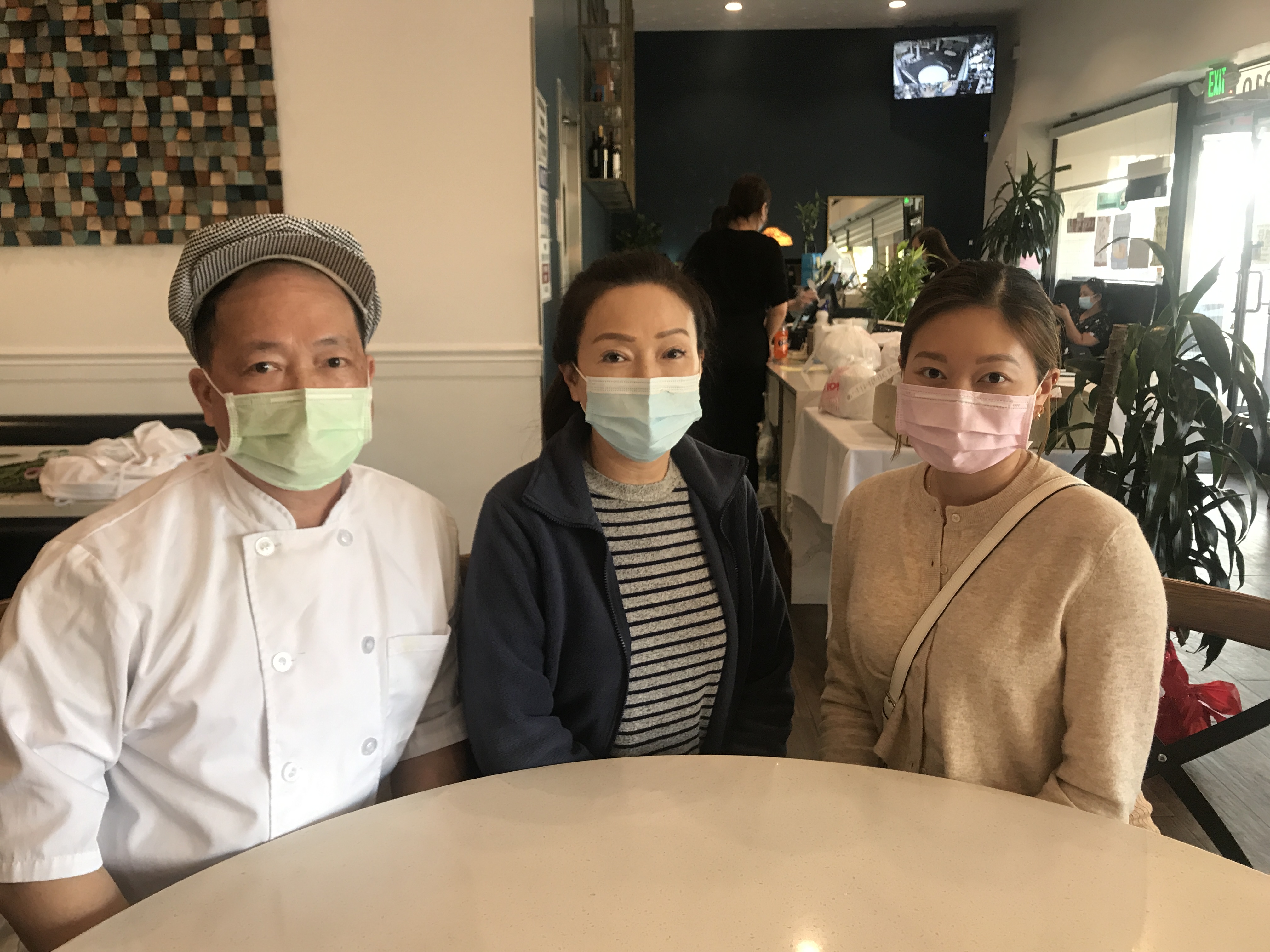 Henry, Frances and Kelly Chang (from left to right) at the family’s restaurant, Jiang Nan Spring in Alhambra. They have been able to keep their employees working, albeit with limited hours, because of regular customers buying takeout. Photo by Benjamin Gottlieb.

Now orders flood in through delivery apps. Their cordless landline rings constantly as waiters prepare large to-go orders on the front counter. This has been a big adjustment for the family. But Kelly Chang says her parents’ immigrant background helps them during this tough time.

“Right now, for all restaurants, it’s about lasting as long as you can,” she says. “But one thing my parents have taught me is the value of hard work. They’re always here at the restaurant when it’s open.”

San Gabriel Valley restaurateurs are determined to make their businesses work, even with mounting losses

Some restaurants in the San Gabriel Valley have been struggling before the pandemic and are unlikely to make it. Others are adapting to — and even taking advantage of — the...

The exclusive Magic Castle sits perched on a hill overlooking Hollywood. The legendary century-old site can only be accessed by membership or invitation, and the likes of...

Is COVID real for OC residents? That's up to debate, says Gustavo Arellano

"If you have more people who are not part of your family around, even if you're wearing masks and even if you’re outside, there's a higher risk. Coronavirus will spread. But...