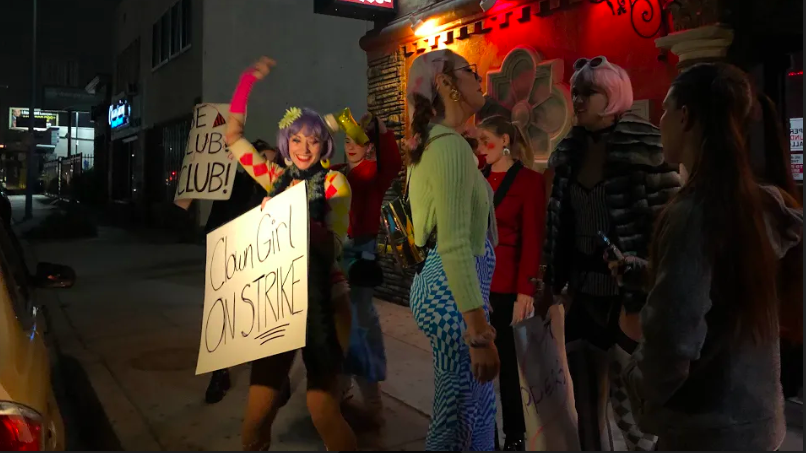 Reagan (left) and other dancers protest their employers at Star Garden Topless Dive Bar in North Hollywood in March. Photo by Robin Estrin.

In the first, she is up on stage, bathed in purple light, feeling sexy and in control. When she looks up, the men in the room aren’t just paying attention to her, they seem genuinely moved by her performance.

“It's like basking in the limelight,” says Velveeta, who agreed only to use her stage name for this story. “I enjoy the attention personally. And I love to dance. And I think I have a great body … I feel confident up there.”

The other story Velveeta tells is darker. Customers are drunk, and their touching sometimes turns into serious aggression – repeated smacking or imminent rape. Velveeta says she once saw a man drag a dancer across the stage by her ankle.

“It's not far-fetched at all to think that we could be stalked or assaulted, stolen from and killed. These are the risks that we take in this industry,” says Reagan, another Star Garden dancer who would use only her stage name for safety reasons. However “there are precautions that are meant to protect us and make the job safe and fun so we don't have to think about these terrible things.”

But dancers at Star Garden say those precautions are not in place at this low-lit strip club on Lankershim Boulevard. Dancers complain that the people who are supposed to protect them at work – the club owners and security guards – don’t. Further, they say that those dancers who have spoken out to management with safety concerns have been fired in retaliation.

That’s why, for the past 10 weeks, these dancers have been picketing outside of Star Garden, trying to discourage any customers from entering.

KCRW reached out multiple times to Star Garden management and their attorney for comment on this story and they did not respond. 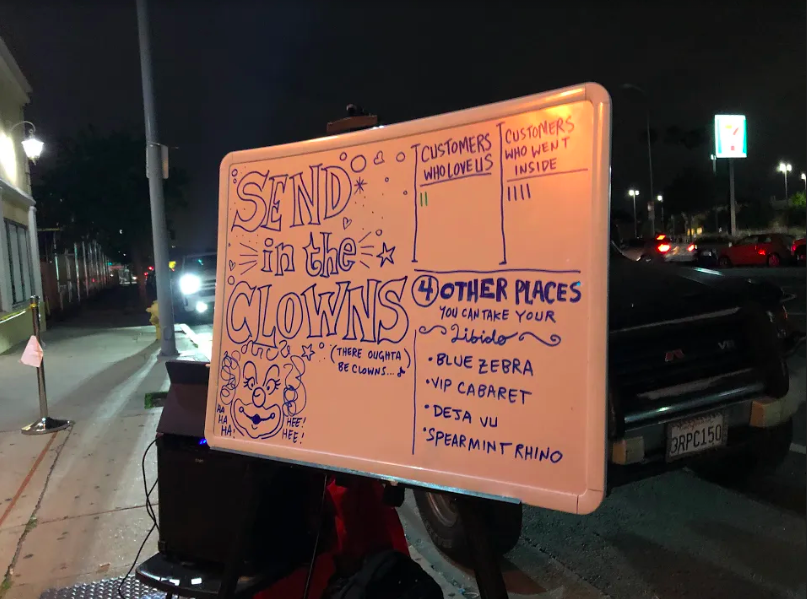 Each night on the picket line, dancers keep a tally of how many customers entered the club and how many they were able to turn away. Photo by Robin Estrin.

Reagan says problems started late last year, when a security guard told her he wouldn’t intervene in a dangerous situation with a drunk customer.

Reagan has danced in clubs across the country for more than a decade, and she says security guards typically take an active role in protecting dancers.

“I had never heard that from a security guard in my life,” Reagan says. “You're ‘not allowed to intervene’? Isn't that your entire job? What are you doing then? You're just standing around for decoration?”

“Anyone who comes in the door is our customer,” she says. “It could be a person who just escaped from a rehab down the street. It could be someone who's on the run. It could be a professional gambler or a politician or a businessman or Steve, the drywall guy.” For every kind and respectful customer who walks through the door, Crane says, others come looking to act out violent fantasies and aggression.

“I've been choked on the shop floor,” Crane says. “I had a client that the DJ nicknamed ‘The Strangler,’ and that's a different client than the one that actually held me in a chokehold.” 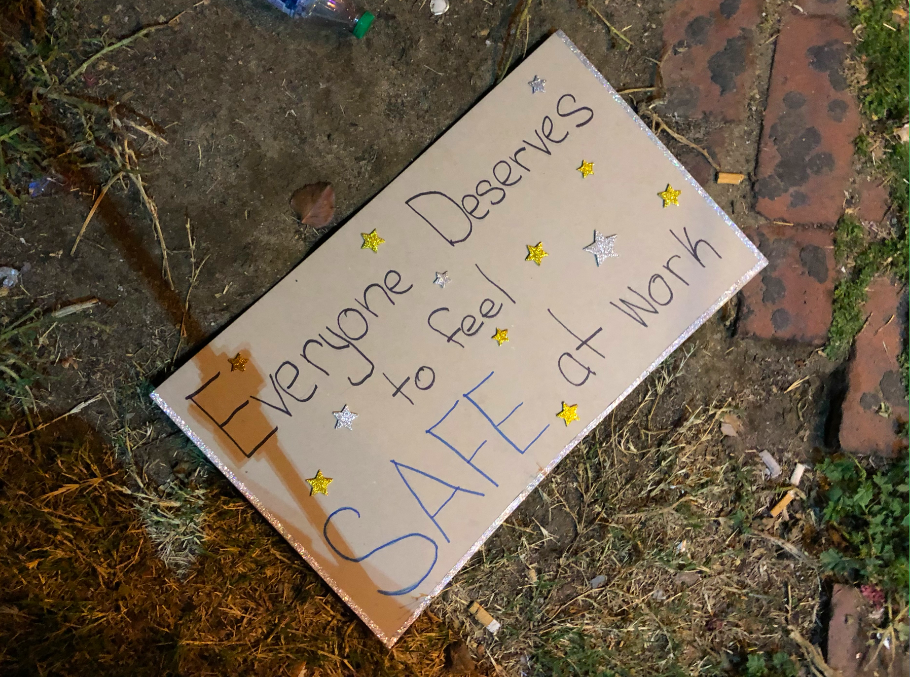 At one protest, this sign reads, “Everyone deserves to feel safe at work.” Photo by Robin Estrin.

Dancers say it’s not easy to enforce boundaries with customers because their livelihood is on the line. At Star Garden, dancers say they have to pay the owners a significant portion of the money they earn giving lap dances.

“You didn't want to just walk away because then you lose your customer, you lose your tip,” Reagan says. “It's so much easier when there's someone that you can have backing you up.”

Reagan says she was fired in late February after an argument with a bartender. She says she went to him with a serious safety concern – a customer was getting possessive.

“And his reaction was to joke to my face that I was going to be murdered, and that this customer was going to kill me,” Reagan says. “I yelled at him, and I was told later that that's what I was fired for.”

Weeks later, another dancer named Selena saw a group of men filming her coworker, – who was topless. She says she was fired after she intervened.

In testimony reviewed by KCRW, Star Garden’s owners, a couple named Stepan “Steve” and Yevgenya “Jenny” Kazaryan, wrote to the National Labor Relations Board that the dancers were asked to leave after acting aggressively toward customers and staff.

On March 18, Star Garden’s dancers walked off the job. Nineteen of Star Garden’s 24 dancers signed a petition and delivered it to management, demanding the couple address the dancers' concerns.

These dancers want management to do away with the policy that prevents security guards from intervening directly on their behalf. They also want panic buttons installed in the lap dance booths, and for management to kick customers out after closing, when dancers walk out of the dressing room in civilian clothes.

But would all that truly ensure the strippers feel safe at work? That question is not easy to answer. 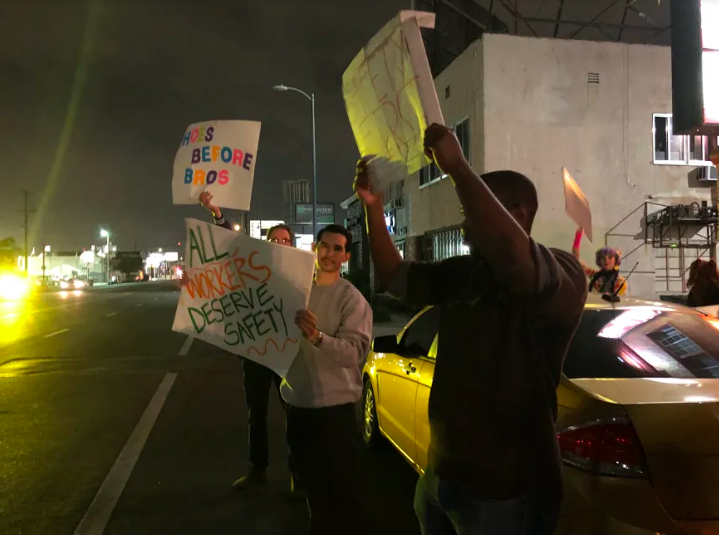 None of the dancers KCRW spoke to for this story – dancers who have worked in clubs all across this country – could name a single model of a strip club where workers routinely felt respected, heard and safe.

“It feels like the industry has normalized so many bad things that it's hard to imagine a club without those issues,” says Reagan.

That’s why the dancers at Star Garden are looking beyond their list of demands. In early May, they voted to unionize with Stripper’s United, the organization formed by Crane in 2018. If their drive is successful, Crane says Star Garden will be the first strip club in the U.S. to unionize since the 1990s.

Then the dancers say they want to come back to work, with policies in place that not only keep them safe, but allow them to have some fun, too.

To save monarch butterflies, this LA group is giving away milkweed seeds

The monarch butterfly population has been dwindling over the years, so the Monarch Fellowship has decided to take things into their own hands to save the species in...

Tiktok’s extreme couponer shares tips on how to save cash

Karla Benavides went from trying to save some cash as a new mom to becoming a coupon savant and going viral on TikTok.