How homeless shelters will pull off Thanksgiving feasts without volunteers In the kitchen of the Santa Barbara Rescue Mission — which provides meals, showers and beds to the city’s unhoused residents — a dozen men are deboning trays of turkeys.

Freddie Rashad, the kitchen supervisor, is teaching men in the mission’s 12-month drug and alcohol treatment program how to cook the mission’s annual Thanksgiving feast. “Anything on the top is the white meat. Anything on the bottom is dark. You see all those tendons here? We’re going to slide it off like that. Get the meat out. The cartilage, we want to take out as well,” he instructs them. 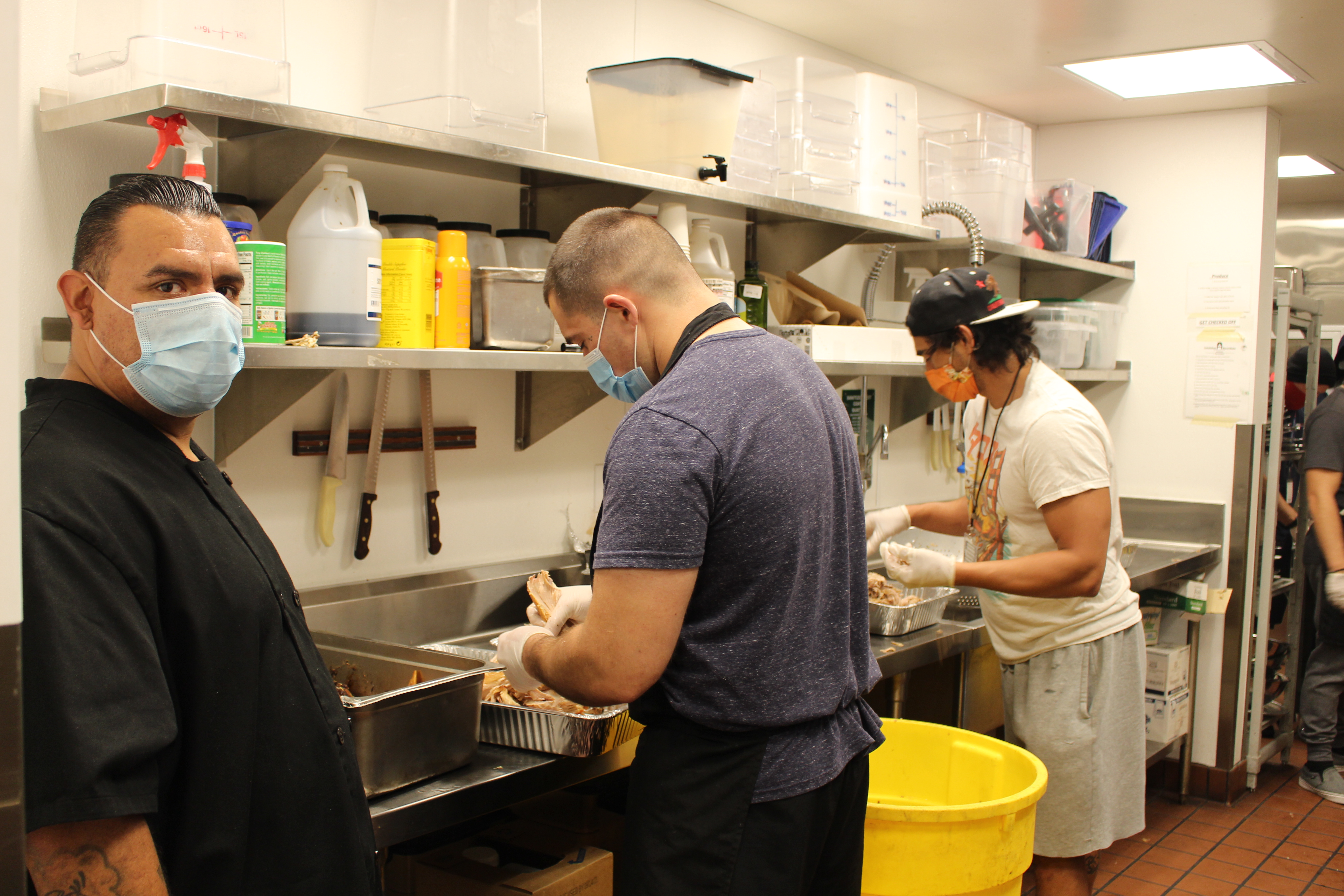 Freddie Rashard (left) graduated from the mission’s treatment program before becoming a staff member. He says a lot of the guys, himself included, came from the streets and can connect to those they serve. “Their past, the destruction … we can relate.” Photo by Kathryn Barnes/KCRW.

A lot of work goes into preparing an all-you-can-eat meal for those who don’t have a home or family to spend the holiday with. Normally volunteers play a crucial role in pulling it off. But this year, due to the pandemic, bringing hundreds of people together to serve and eat food isn’t safe.

The Santa Barbara Rescue Mission, like many homeless nonprofits across Southern California and around the country, isn't allowing volunteers on-site this holiday season.

This will be the first time in years that Santa Barbara resident Trey Pinner won’t serve unhoused guests at the mission on Thanksgiving. He leads a local Boy Scouts troop, and typically brings them along to help.

“I think it's as life changing for [the scouts] as it is for the guests,” he says. “Because many of them don't have to deal with the issues that the folks coming to the Rescue Mission have to deal with. So we’re sad this year. We don't get to have that opportunity.” 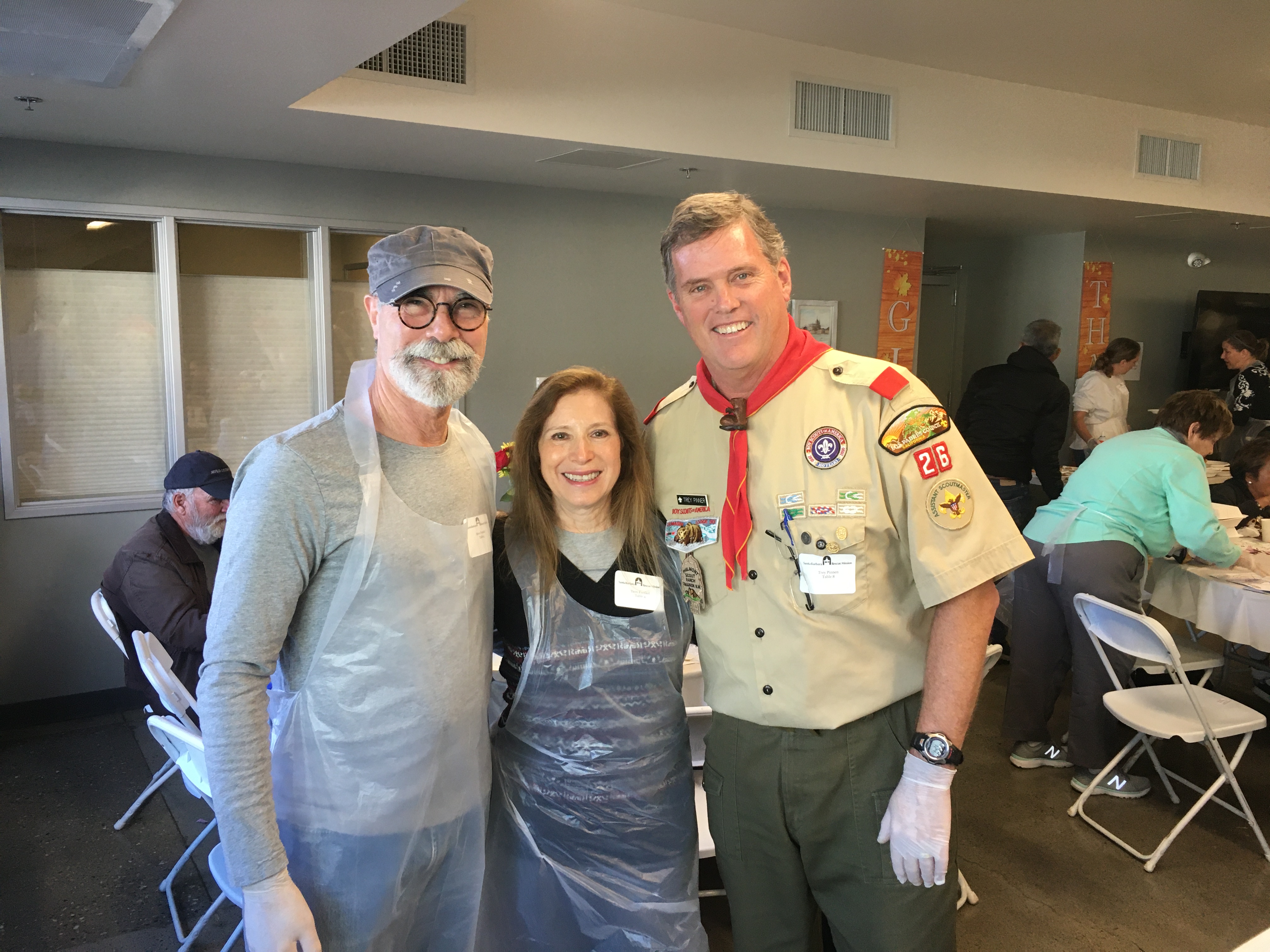 Trey Pinner (left) with other volunteers at Thanksgiving 2019. “The most important thing about the event is everyone is considered and treated like a guest.” Photo courtesy of Trey Pinner. 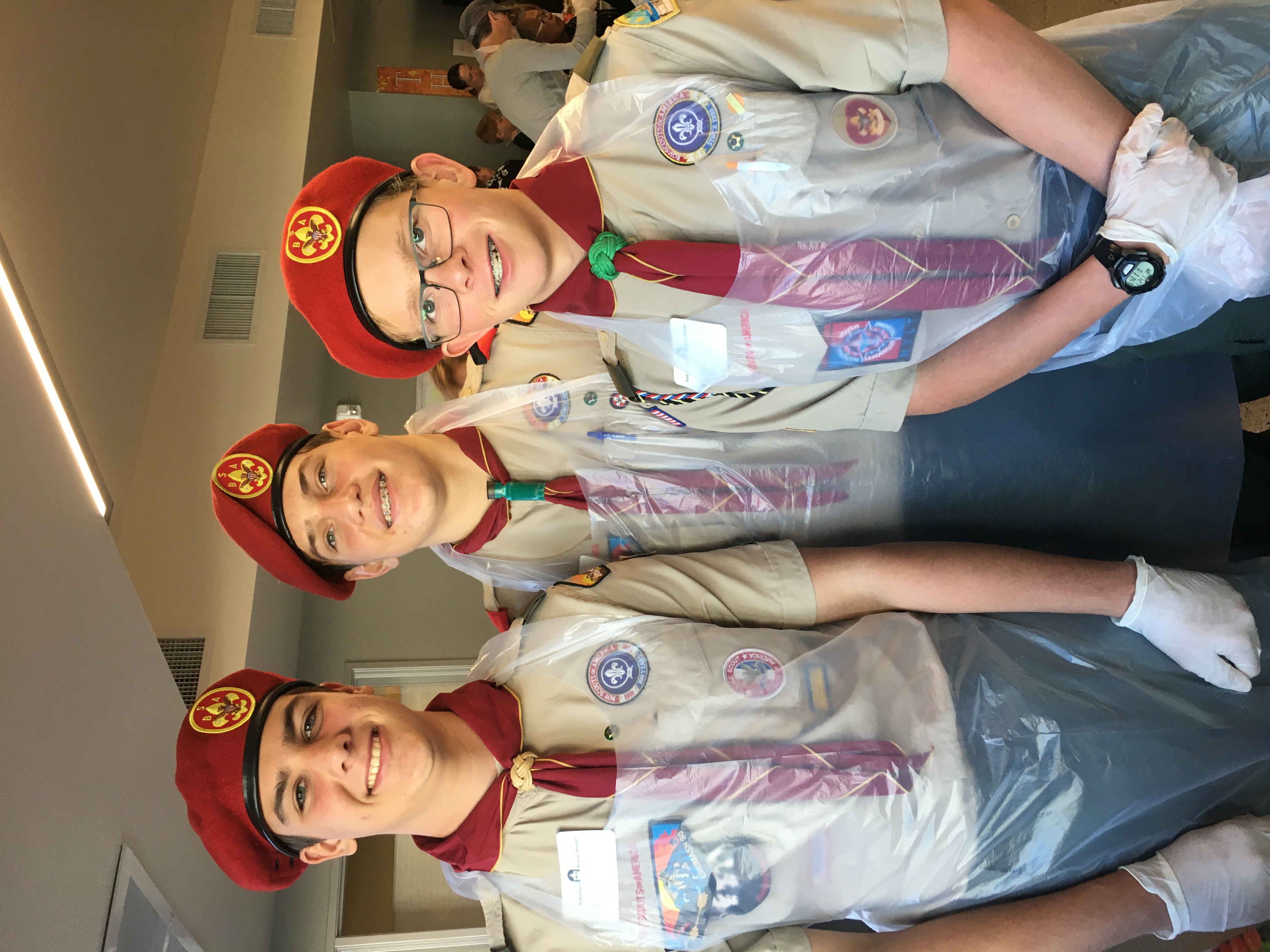 Trey Pinner typically brings members of the local Boy Scouts troop he leads to help serve the meals. This year, due to the pandemic, he can’t. Photo courtesy of Trey Pinner.

Nearby restaurants are closed to indoor dining right now. But since the shelter is deemed an essential service, guests can still eat in the cafeteria. Instead of 100 people crowding in at once, however, only 40 people will be allowed in at a time. Red “Xs” on seats show where you’re not allowed to sit.

“You're sitting by yourself, so it's a little bit different as far as the atmosphere, the energy here,” says Rashad. “It kind of messes up the feeling of interacting with somebody.”

2020 has been a universally isolating year, and those living on the streets have felt that isolation strongly. With limited access to public libraries, sit-down meals, and other resources, there are fewer opportunities for human interaction.

“Looking at our society pragmatically, we have been socially distancing from the homeless for decades. It’s just that the COVID has given us a term for it,” says Rolf Geyling, the executive director at the mission. “When we see the high incidences of mental illness and disenfranchisement among the homeless, part of that comes from not being embraced by a community you’re a part of.”

Other homeless nonprofits aren’t as lucky as the Santa Barbara Rescue Mission, which can at least hold a paired down on-site dinner. Those who stop by the Midnight Mission in LA’s Skid Row on Thanksgiving will get a traditional Turkey Day meal, but in a to-go bag they must take off site.

“Typically on Thanksgiving, we have a huge street fair,” says Georgia Berkovich, who works at the mission. “We close down the street between San Pedro and Wall, we set up a big stage in the intersection of San Julian and Sixth Street, and we have bands play. We set up tables and chairs and serve about 2,500 people on the street. …  Now, with the pandemic obviously, we cannot have an event of that size.”

Five hundred volunteers typically chip in, but, like in Santa Barbara, no one except staff is allowed at the mission this year. 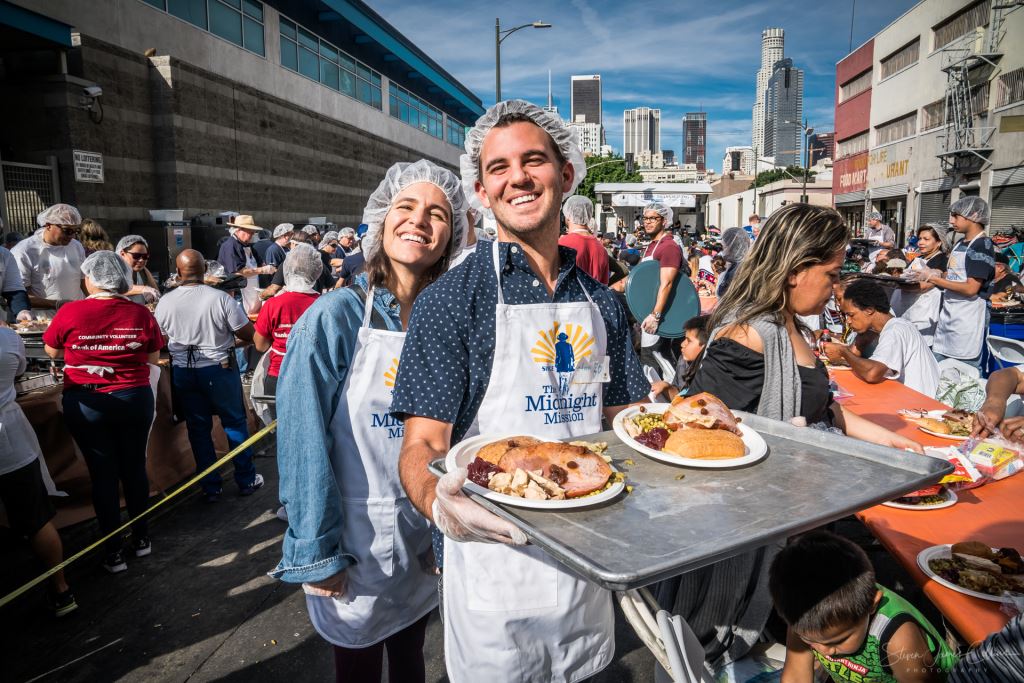 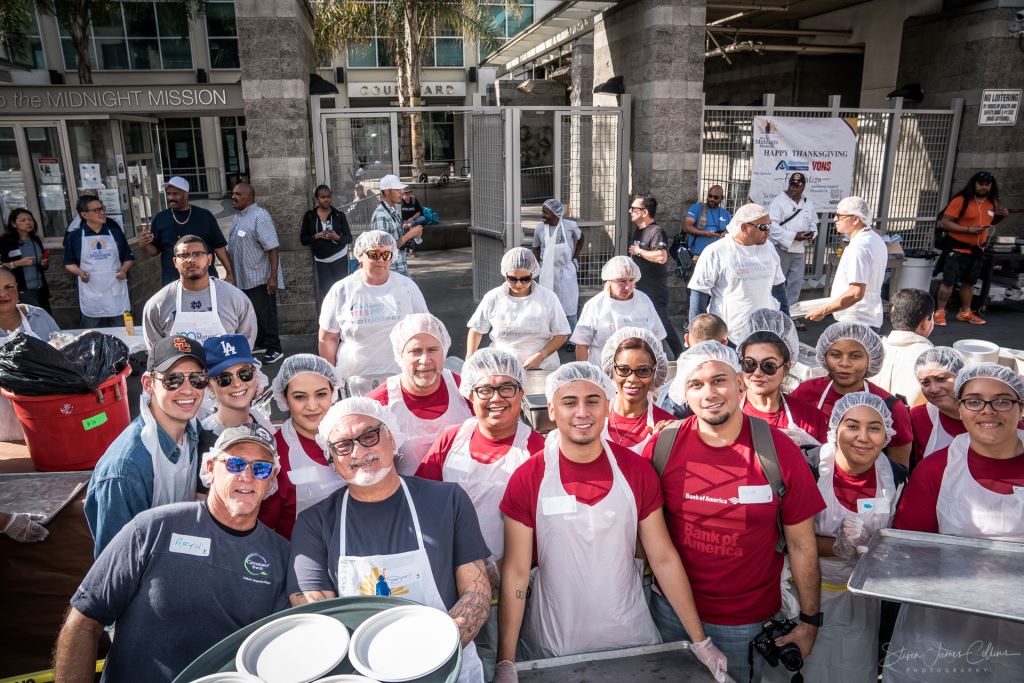 Many people are still finding ways to help from a distance, however. Instead of spreading out decorative tablecloths and piling up plates of food, Culver City resident and longtime volunteer Susie Siverts wrapped the silverware sets that will get placed into the to-go bags.

“We’ll put the knife and the fork and spoon on a flat napkin. And then we’ll fold the napkin up and curl different colored ribbons, you know to make it festive,” she said. “So that’s what I’ll be doing this year from home.”

In Santa Barbara, Trey Pippen and his Boy Scouts troop will be making and dropping off more than a dozen pumpkin pies.

Some homeless organizations are taking volunteers this year, like Union Station Homeless Services in Pasadena.

“It's been tough to get volunteers. People, obviously, are nervous about going out and volunteering,” says the nonprofit’s CEO Anne Miskey. She and her team desperately need help packing and handing out to-go meals.

There are lots of ways you can help out this holiday season, like donating cash to a local homeless services provider, organizing a food drive, creating to-go meals, or holding a virtual fundraiser. If you missed your chance to help out this Thanksgiving, remember, feeding people and showing you care doesn’t stop after the holidays.

Homeless shelter staff are in overdrive serving Thanksgiving without volunteers

How homeless shelters will pull off Thanksgiving feasts without volunteers

In the kitchen of the Santa Barbara Rescue Mission — which provides meals, showers and beds to the city’s unhoused residents — a dozen men are deboning trays of turkeys.

Many people are feeling COVID fatigue. They’re fed up with having to stay inside and perhaps giving up their holidays with friends and family. People working in hospitals...

From potluck door drops to hospital shifts, how Angelenos are navigating Thanksgiving

With Thanksgiving feeling a lot different this year, KCRW asked three Angelenos how they plan to safely celebrate the holiday.