Construction crews contracted by the City of Los Angeles work to repair a stretch of sidewalk in the Pico-Robertson neighborhood of LA. The project is one of hundreds that the city is hoping to fix in the coming years. Photo by Benjamin Gottlieb

Every time Cynde Soto leaves her home in Long Beach, and commutes to work in downtown Los Angeles, she takes a big risk.

“It is like falling off a cliff… that is how it feels to me, to use the sidewalk,” says Soto, who works for Communities Actively Living Independent and Free, or CALIF, a nonprofit that helps people with disabilities. “And if you can imagine yourself doing that, then you will know how I feel.”

Soto is paralyzed from her shoulders down to her feet, the result of a bad spinal cord injury.

“So that means I need to drive my motorized wheelchair with my chin,” she explains.

Soto takes Metro’s Blue Line to work and gets through the day with the help of some in-home care.

However, LA’s sidewalks are a source of tremendous frustration; specifically, she says, the last few blocks of her commute from the 7th/Metro Center stop, south to Spring Street.

“That is where the trouble starts,” she says. 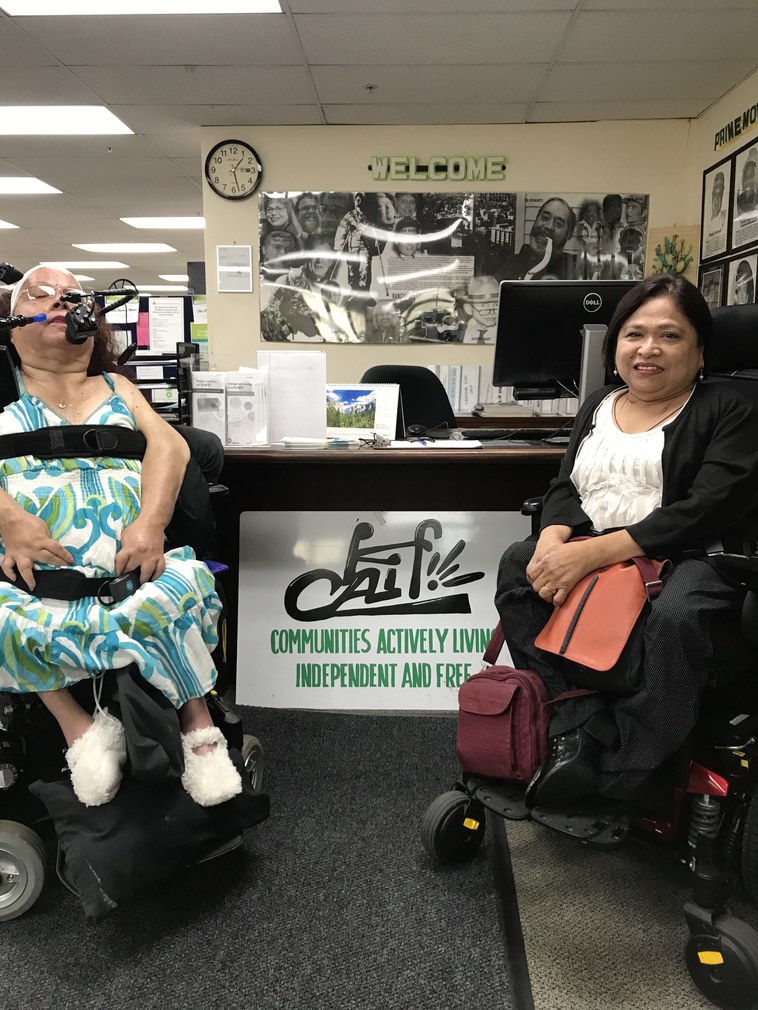 Cynde Soto (left) at the downtown office of Communities Actively Living Independent and Free, or CALIF. Photo by Benjamin Gottlieb

The City of Los Angeles estimates there are roughly 9,000 miles of sidewalks crisscrossing the city and somewhere between 1,500 to 2,000 current repair requests. That number keeps growing.

The reason there are so many requests has to do with a small, yet consequential moment in local history. Back in the 1970s, the city agreed to take over the responsibility of fixing sidewalks damaged by trees planted along its streets. Previously, those repairs fell under the dominion of property owners.

However, the city did not have adequate funding to repair all those miles of sidewalk and thousands of miles of walkways fell to disrepair.

Since then, responsibility has been transferred back to home and business owners. But the damage has already been done.

“We did not even know where all our sidewalks were,” says Julie Sauter, Deputy City Engineer for the City of Los Angeles, who is basically in charge of the city’s sidewalk repair program.

Sauter explains that, these days, the city receives on average 60 to 70 sidewalk repair requests per month, but can only fix about 10 to 15 on average.

“We have a limited amount of resources to address these on a year-by-year basis,” Sauter says. “I think [it] was unexpected, the demand; the tremendous demand for sidewalk repair. I think it really honestly caught people off guard.”

A few years ago, following a court settlement called Willits V. City of Los Angeles, the city agreed to spend $1.4 billion over the next 30 years to fix its sidewalks. The case was filed on behalf of a group of people living with mobility disabilities and set up a system for them to file a request to have their sidewalks fixed.

The LA City Council subsequently agreed to spend an additional $10 million each year on sidewalk repair.

But city officials soon recognized the demand for sidewalk repair extended beyond the needs of people living with disabilities. The city set up a rebate program for repairs, but that quickly became inundated with requests and has since been suspended. 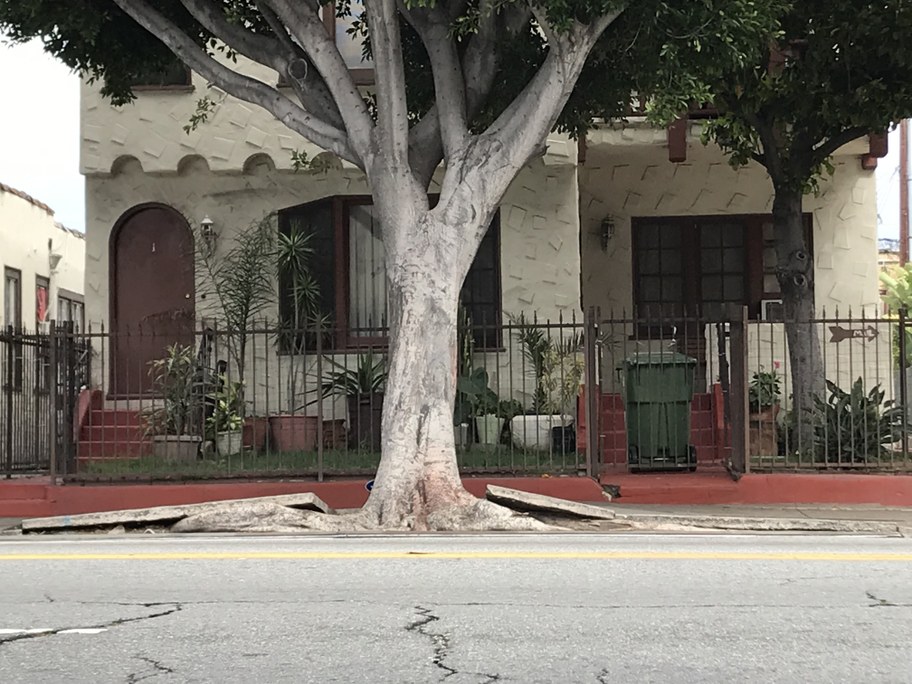 A stretch of Soto Street in Boyle Heights is one of the more extreme examples of a problematic sidewalk in LA. Here, poorly planted ficus trees completely displace slabs of concrete. Photo by Benjamin Gottlieb

This combination of factors - sidewalks neglected for decades, an inundated repair request system and a lack of resources - has created an environment where thousands of miles of sidewalks are in desperate need of fixing.

There also appears to be an efficiency problem with the sidewalk repair program. At roughly 120 to 150 sidewalk repairs every year, it is costing the city roughly $250,000 to $350,000 per repair project.

Those estimates include myriad costs other than just concrete; they include labor and environmental reviews, among many other things. But the estimates highlight just how expensive it is, right now, for LA to fix its sidewalks.

LA is looking at alternatives, such as rubber and other substances that may last longer.

“I think almost every Angeleno starts at the same place,” says John Yi, the executive director of Los Angeles Walks, a pedestrian advocacy group. “Our streets are terrible and we have some of the worst traffic. I think no one would argue against that. The next step is what do we do to fix it? For some reason, I think it is hard to get to that point.” 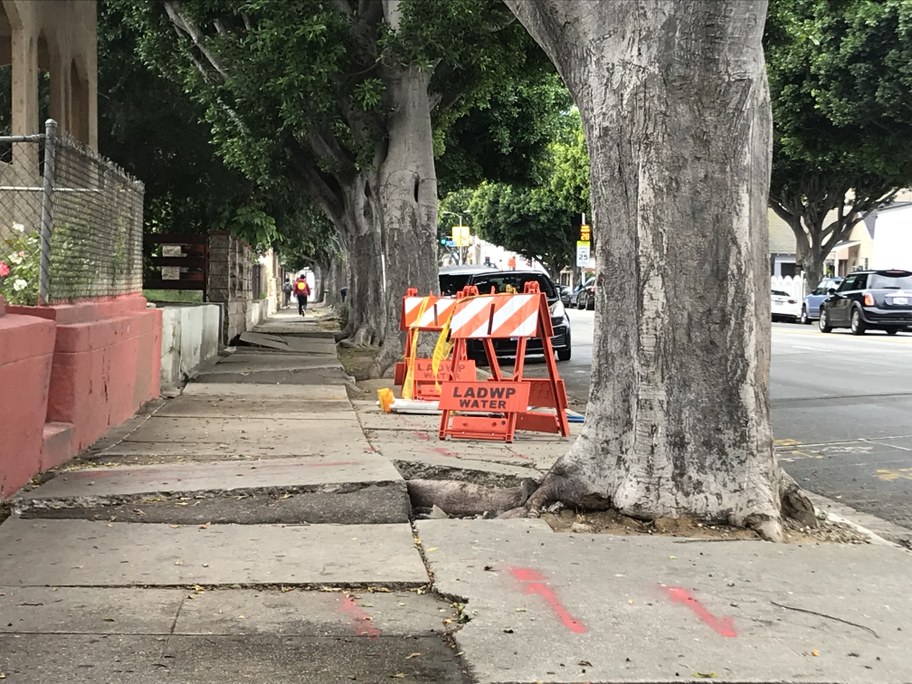 Caution signs litter a stretch of sidewalk on Soto Street in Boyle Heights. Activists say they have filed a request to fix this area, but have not heard back from the City of Los Angeles. Photo by Benjamin Gottlieb.

Every time Cynde Soto leaves her home in Long Beach, and commutes to work in downtown Los Angeles, she takes a big risk. “It is like falling off a cliff… that is how...

Parents who were separated from their children at the U.S.-Mexican border last year are launching a legal fight against the Trump administration.

OC Line: Will Seal Beach be underwater by 2100?

Climate scientists project that the Pacific Ocean could rise anywhere from three to more than nine feet along the California coast by the end of this century.