UCSB student James Estrada looked for housing near his campus for two weeks but had no luck. Now he plans to live in this newly purchased sprinter van instead. Photo courtesy of James Estrada.

James Estrada has driven all over Southern California during the past few weeks, to strangers’ homes and grocery store parking lots, looking for a used van where he can sleep, cook and study math. That’s because Estrada is about to start his fourth year at UC Santa Barbara, and like hundreds of other students there, he has nowhere to live.

“The van kind of seems like the best option,” Estrada says. “I know where I'm gonna be sleeping every night. It's not like looking for housing every day and just not knowing."

Housing has never been easy to come by in Santa Barbara County, and it is especially hard right now. Take one pandemic, with all the changes in planning it brings, add to it a statewide housing crisis, and sprinkle on some Santa Barbara-specific difficulty building new homes, and what do you get? Students planning to live in their cars, hoping the school can provide motel rooms, or wanting to quit school due to frustration.

Estrada looked for housing near UCSB for weeks with no luck. That’s when his friends suggested he look into van life. He’s already overwhelmed at the thought of the year ahead.

“Every day, I'm gonna have to be thinking about, ‘Is this a good place to park?’ Am I gonna get a fine? Is my van gonna break down?’” Estrada wonders anxiously. “It feels ridiculous.”

He blames UC Santa Barbara. “I don't get how they expect people to come to their campus, pay high amounts of tuition, and just be living on the street. It's insane.”

KCRW requested interviews with at least seven officials in UCSB’s housing services, student affairs, and the chancellors’ office. Most of those requests were declined or met with no response. One public affairs official wrote in an email that they have provided housing for “all of our new transfer students and incoming first- and second-year students.”

Two weeks ago, Chancellor Henry Yang announced that the university has been “negotiating with local hotels to make rooms available” for students.

Robin Unander was the only individual affiliated with UCSB willing to speak on the record. She is employed by the school as a legal services advisor for students, but did not speak on behalf of the administration.

She identifies several reasons this extreme housing shortage is happening now. The first: Remote office-workers have left bigger cities for more peaceful Santa Barbara. “What I've seen is a community that has become very appealing for people not university-related to move to for quality of life.”

She also says the pandemic made students hesitant to start their housing searches, not knowing if they would even return to campus in the fall.

And the students that did manage to find a place near campus do not want to live as densely as they used to due to COVID-19 risks. “Where they might have originally lived with 10 people in a place to be able to afford it, now maybe they only want to live with six,” she says.

Unander says she understands why students want to condemn the school for bad planning, but does not believe the school could have predicted this.

But the oceanside town of Isla Vista, home to UCSB’s campus, has long been known for two things: the ocean breeze carrying the scent of saltwater cannabis, and the bewildering number of residents squished into the nearly two-square mile community.

Santa Barbara County Supervisor Joan Hartmann represents Isla Vista and surrounding areas, and she says the housing issue is “acute this year, but it goes back many years. Because students haven't had the housing on campus that they need.”

She blames the Regents of the University of California, which is the governing board for all UC schools, pointing out that other UC campuses such as Berkeley and UC San Francisco are experiencing similar housing problems.

Even before the pandemic, Santa Barbara had its own profound version of this crisis.

In 2010, UCSB promised Santa Barbara County that they’d cap enrollment and build more housing by 2025 or once they hit 25,000 undergraduate students — whichever happens first. The county says UCSB exceeded their enrollment limit, but UCSB has provided data showing they’re just below it.

On the housing construction front, Supervisor Hartmann says the school was “supposed to build about 5000 student units. They have about 1500. They claim that many of the students are living in triples that they've concentrated more on campus. I don't know that to be the case.”

Hartmann says UCSB was also supposed to build 1800 faculty and staff housing units, but so far have built fewer than 20% of those homes.

While administrators scramble to come up with hotel rooms and building plans, Estrada would be glad if the school could just give him a spot to park his van.

“I think I could relax a little bit, just knowing I can keep my van there,” Estrada says. “I don't have to move it every day. I could honestly just keep it parked there and only have to drive it when I have to go get groceries or something. That would be really relieving.”

There is a safe overnight parking program in Santa Barbara County called New Beginnings, but they are set up to help those who have been priced out of their homes, or are experiencing domestic violence, or mental health struggles. Students who do not have access to housing options do not fall into these categories for the most part.

And while it is not illegal to sleep in your car near the university in Isla Vista, Supervisor Hartmann says that is not an adequate housing situation for students.

Asked what message she has for students planning to live in their vehicles, Hartmann says, “Come to me, and I'll march you right up to the chancellor's office and say, ‘This is untenable. And this person needs support housing, get them in a hotel room, that's going to be a lot more expensive than if you built that housing in the first place that you're obligated to do.’”

Meanwhile, with classes just two weeks away, students are using words like “desperate” and “abandoned” to describe their search for housing. 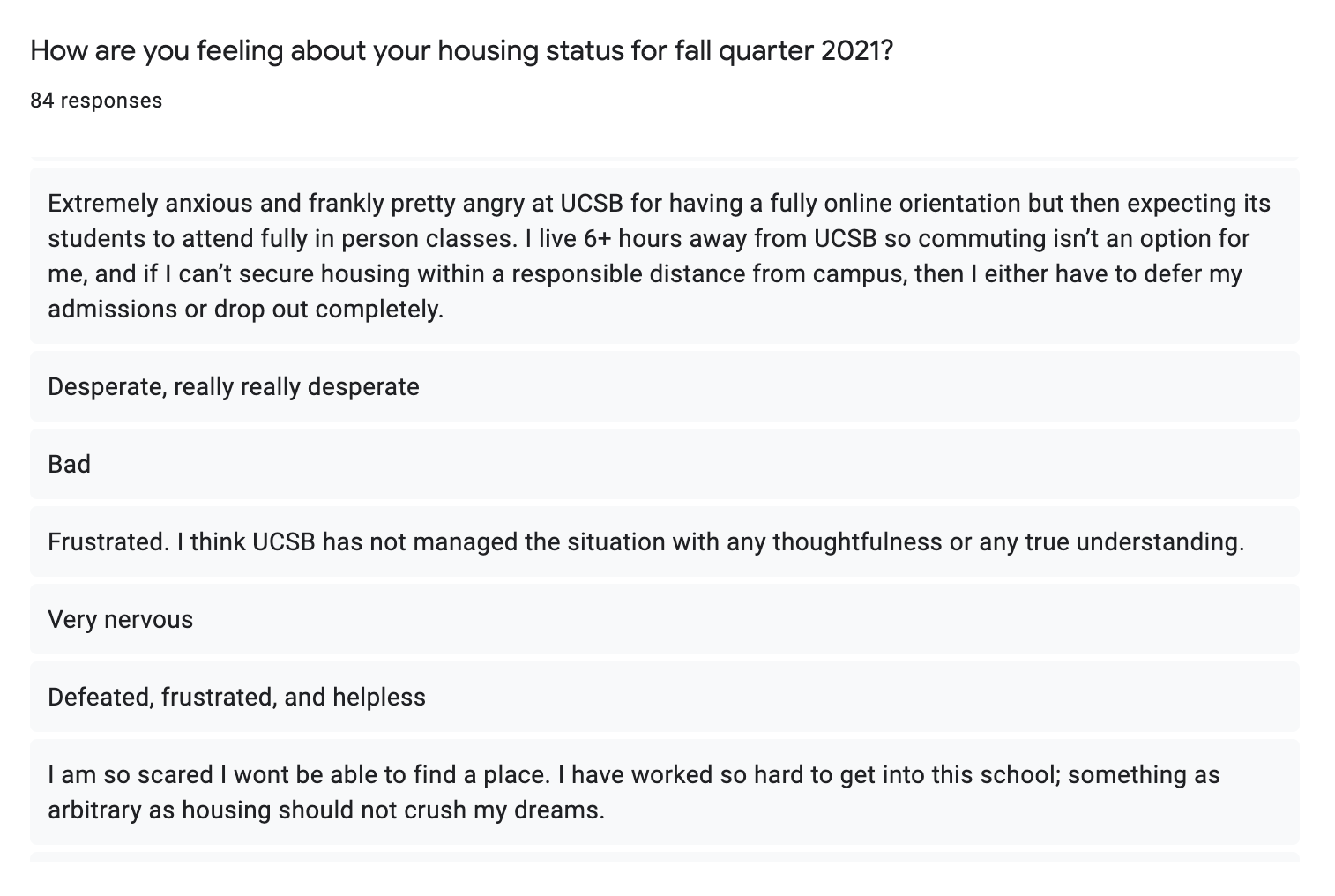 Students’ responses to a survey conducted by reporter Jackie Sedley, regarding their housing statuses for the upcoming school year. Photo by Jackie Sedley

One of these students is Alexandria Matthews, who currently lives in Redding. She was set to transfer to UCSB this fall, but felt blindsided by the school’s decision to offer classes in-person. She says she was reassured by three UCSB staff members that she’d be able to do the quarter remotely.

“Then I find out end of July, as I'm looking for my classes, figuring out what I'm going to take in a few weeks, I find out 99% of them are in-person and none of the classes I need are online,” Matthews says. “And then I talked to another academic counseling person and she was like, ‘Oh didn't you know? You have to be here in person.’ So that's when she pointed out all the housing things that I could look at on Facebook while I was crying to her because I don't want to be homeless.”

After looking for live-in nanny jobs, and even considering living in her mini SUV, Matthews says she has decided she wants nothing to do with the university. She’s currently attempting to withdraw from UCSB. 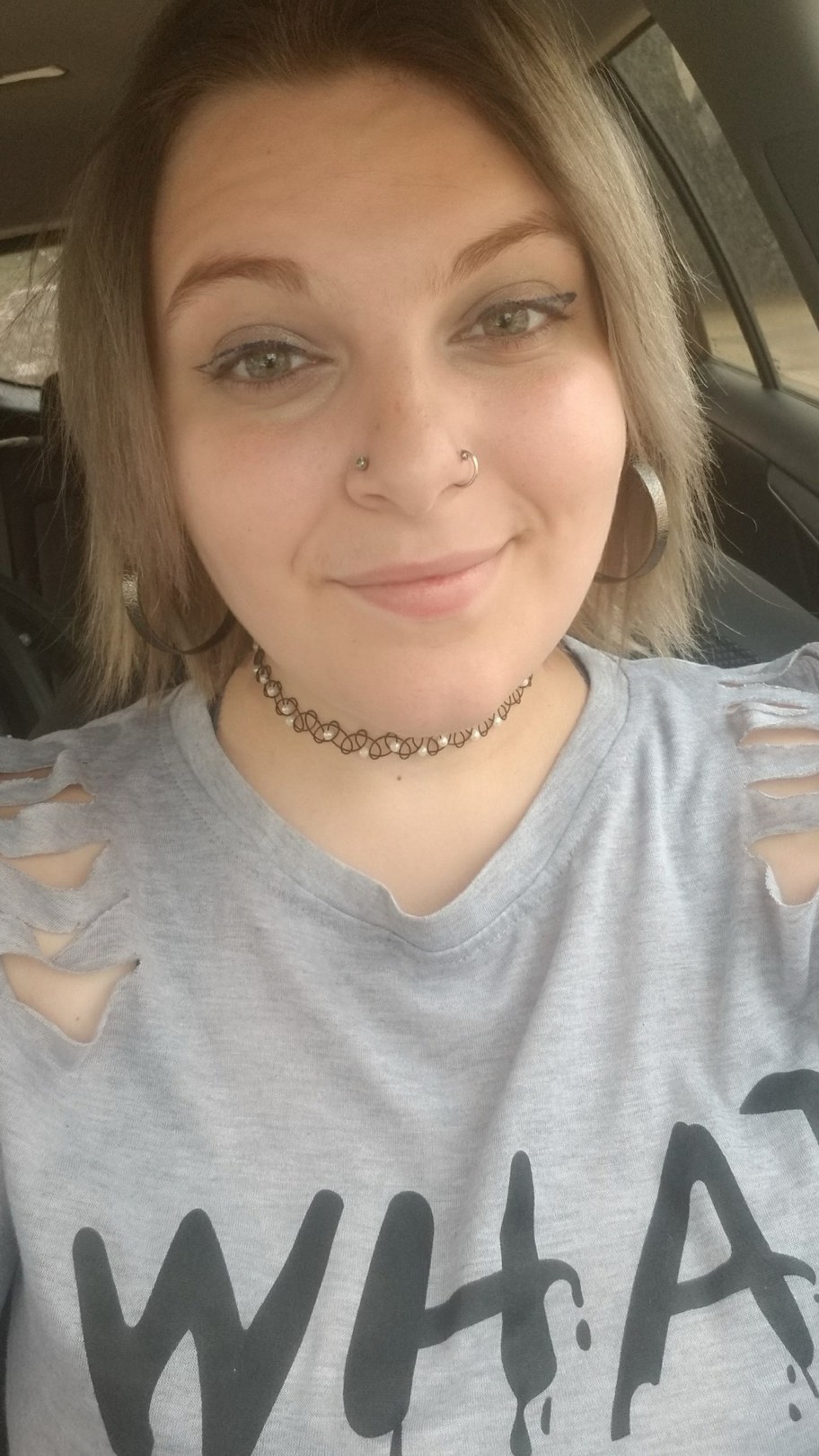 UCSB classes are just two weeks away, and students are using words like “desperate” and “abandoned” to describe their search for housing. Some hope the school can provide...

The Street Medicine program at USC’s Keck School of Medicine is one of roughly 28 programs in California that offer health care to people experiencing homelessness on the...

For Beauty 2 the Streetz founder Shirley Raines, beauty is both a luxury and necessity. The LA-based nonprofit provides unhoused people with beauty services, hygiene...