Blue Line commuter Bobbi Duckett relies on the train to get to appointments and counseling as she attempts to rebuild her life after serving time in prison. She’s just one of the thousands of people whose transportation lives will be affected by the temporary closure of Blue Line stations during renovations. Photo: Saul Gonzalez

Every day, thousands of people between Los Angeles and Long Beach board the Blue Line light rail system to go where they need to go.

That includes Bobbie Duckett, who was paroled from prison 18 months. She uses the Blue Line to get to mandatory appointments with her parole officer and doctor.

“And then I go from L.A. to see my doctor,” Duckett told KCRW as we traveled south on the train.

For Duckett, the 22-mile-long Blue Line is essential to rebuilding her life after prison. But her Blue Line commuting life is going to get more difficult starting Saturday. 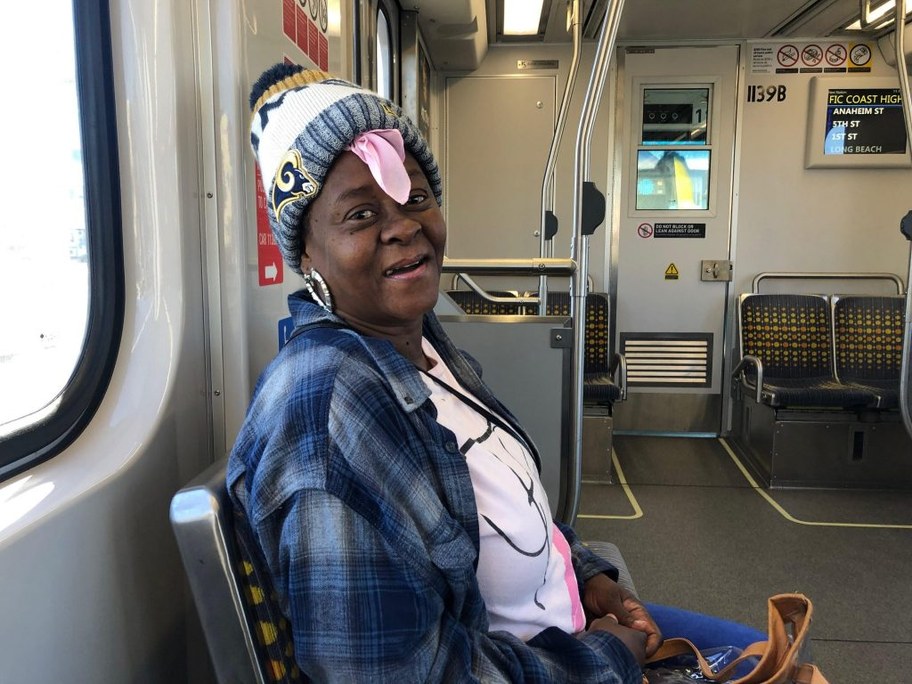 Blue Line commuter Bobbi Duckett relies on the train to get to appointments and counseling as she attempts to rebuild her life after serving time in prison. She’s just one of the thousands of people whose transportation lives will be affected by the temporary closure of Blue Line stations during renovations.Photo: Saul Gonzalez

“It opened in 1990, and it does need upgrades,” said Ayda Safaei a spokesperson with Metro. “There are certain things like,  for example, the overhead power system which is 29-years-old, so it's time to upgrade those systems.”

Other upgrades will include new tracks, signaling systems and electronic signage at stations.

The improvements might also reduce end to end travel times on the Blue Line by up to 10 minutes. Currently, the Los Angeles to Long Beach trip usually takes just under an hour.

The southern half of the line from Willowbrook Station near Compton to downtown Long Beach- 12 stations in all- will be closed from this weekend to May.

Then from May to September, the northern half of the Blue Line, from Willowbrook to downtown L.A. will close. That means 11 shuttered stations.

To move Blue Line passengers during the closures, Metro will deploy fleets of shuttle buses. Some will stop at each closed station, others will offer express service between L.A. and Long Beach

“The express shuttle stops at all the Long Beach stations and then gets on the 405 and then the 110 express lanes,” said Metro’s Safaei.

But Duckett worries that delays for thousands of passengers will be inevitable, no matter how many buses are pressed into service.

Duckett doesn’t own a car and really doesn’t have a choice. She has to endure the Blue Line closures .

Metro’s worry is that people who could drive, but who’ve gotten used to taking the train, will go back to car commuting during the Blue Line closures, and maybe never come back to mass transit.

When asked if she might return to riding the Blue Line when the renovation work is done, Caravalli replies with one word: “Maybe.”

That’s not the kind of answer Metro wants to hear, since it’s already wrestling with a decline in public transit ridership even as it builds new light rail lines.

But Metro’s Ayda Safaei is confident most passengers will stick with the Blue Line after the project is done.

“I truly believe the model that we've set up with these bus shuttles, I really believe that they are going to stay with us,” said Safaei. And that actually it's going to it is going to be a better Blue Line.

And there’s one more change coming to this train. When the work is completed in September, the Blue Line won’t be the Blue Line anymore.

Metro is moving to letter names for its light rail and subway routes, so the Blue Line will be rebranded as the A Line.