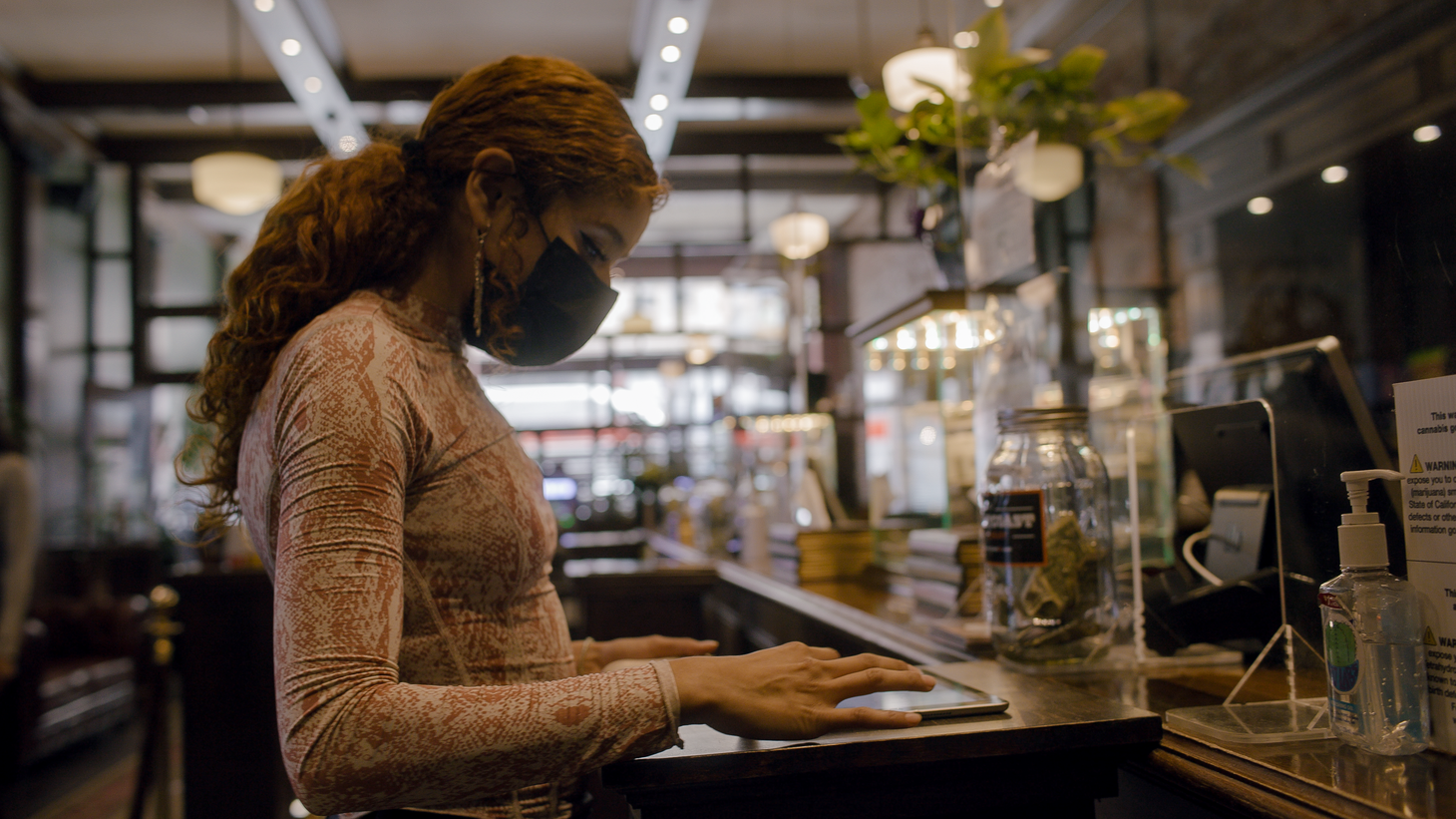 A “budtender” works the cash registers at Barbary Coast dispensary in San Francisco, CA. “Eyes are on Senator Mike McGuire and his cultivation tax relief, especially given that the governor's office has signaled they're open to supporting the cannabis industry,” says Leafly Senior Editor David Downs. Photo by David Downs.

Tax season is upon us. As accountants pull out their green visors, just how much green the tax man takes is causing a stir in the cannabis space.

Industry professionals say pot is overtaxed in California. However, that tax money is doing some good, including subsidizing programs for low-income and at-risk youth.

How much is California receiving a year from cannabis taxes?

David Downs: California is collecting about $250 million per quarter, which came out to more than $1 billion in 2021.

Where is the tax money going?

We found out in 2020 that this money helps low-income children. Specifically, in the fiscal year 2021-2022, 21,486 low-income children received child care that was funded by pot tax dollars. It's the only dedicated revenue stream for these child care vouchers which were radically cut back in the last recession in 2009.

What tax changes could be coming?

Senator Mike McGuire is a Democrat whose district encompasses a lot of marijuana growers. He’s proposing Senate Bill 1074, which would eliminate the cultivation tax as of July 1. It is just one endeavor at the state level.

There are also a number of tax-cutting actions going on at the local level which could potentially be more important. However, eyes are on Senator Mike McGuire and his cultivation tax relief, especially given that the governor's office has signaled it’s open to supporting the cannabis industry.

What is the timeline for McGuire’s bill?

Legislators have pretty much all year to work on the bill if they want to. It doesn't look like it's going to be an urgency bill, but they can change it in the summer. So stay tuned.

What is the cannabis industry saying about taxes?

When I talk to licensees — big and small — they're all looking for a tax reduction. California cannabis licensees are triple-taxed thanks to Proposition 64, and some local levies are hundreds of times higher than on any other business.

Every business size says it could benefit from tax relief, but especially the smaller operators, who operate on bigger profit margins. They're the ones that are screaming the loudest because they're the deepest in the red.

Generally, larger companies can operate on smaller margins and absorb tax burdens. It's the smaller mom and pops who are plowing their cannabis crops because the price got so low that they can't even pay their bills.

What are child advocacy groups saying about cannabis taxes?

They want to defend the revenue stream that they now have access to.  That's really news to me because this welfare bureaucracy has gone from hiding their pot tax grants to touting that in defense of cuts.

It's essentially pot Democrats versus welfare Democrats in the legislature in 2022. I've been on the beat for 12 plus years. And I can tell you the public health bureaucracy has never stepped forward and said, “Hey, pot is good. We want the taxes.” They've gone from hiding that funding stream to actively touting how well it's doing.

Could California’s budget surplus make an impact on the taxes?

I think it should be. The governor is projecting somewhere between a $45 and $60 billion budget surplus for California. The question is whether some of that surplus can make the public health bureaucrats whole while also allowing to reduce the cannabis industry taxes. That's one of those questions that remains to be seen.

Can lawmakers appease both sides?

No. It'll come down to who has more pull in Sacramento —  the vast welfare industry versus the pretty muscular cannabis industry now. California is kind of a post-GOP state and we're seeing the fight between two types of Democrats: the progressives versus moderate Democrats.