“The reputation of America has been broken. America always saw itself as number one. Well now it needs to show that it is number one. I doubt that people will allow for immigration to be kind of overshadowed by other issues,” says Carmen Gonzalez, a 19-year-old undocumented student at Santa Monica College. Photo courtesy of Carmen Gonzalez.

Under the Biden administration, U.S. Immigrations and Customs Enforcement is scaling back arrests and deportations of people who are in the country illegally. Agents will no longer look to deport undocumented immigrants accused of crimes like driving under the influence or assault, and instead will focus on those considered national security threats or who are wrapping up prison terms for violent felonies.

This is the latest in what's been a blizzard of executive orders and directives on immigration policy from President Biden during his first few weeks in office. The changes are being closely watched by immigrants across the country.

Carmen Gonzalez, a Santa Monica College student, is among them. They're 19, undocumented, and originally from Mexico. They came to the U.S. with family members six years ago.

Gonzalez says they're cautiously optimistic about the impact Biden could have on immigration policy and daily life. “I don’t want to jinx it just yet, but it feels like he's trying his best to accomplish the promises he gave the American people. And I do really appreciate that. … Immigration is one of his top priorities, to at least fix the mess and the trauma that the last president gave us.”

KCRW: Biden's immigration overhaul includes a pathway to citizenship in eight years for many undocumented people from Central America. Do you think that's fast enough? Are you pushing for something quicker?

Carmen Gonzalez: “That's not fast enough. That's already what it takes, it takes around 10 years. If you're a sibling of a citizen holder, and then they're petitioning for you.

I just think we're at a point in society where we do need to push for more radical and faster solutions. And I would hope it would be brought down to at least five years. I have a lot of Central American friends, and it’s rough right now for them money-wise, economically, politically. And I wouldn't want to see anyone else be more hurt.”

Under the Trump administration, did you find yourself worrying about your status, your daily life? Were you afraid of being deported any day? Or was it something you pushed to the back of your mind?

“It was a rough four years. There was that one year where he was just having raids randomly through the weekend. There was the rhetoric that he was using that was very hurtful and very confusing for a lot of people, a lot of young people. You're supposed to follow these adults, and they're saying horrible things about your parents or your friends. 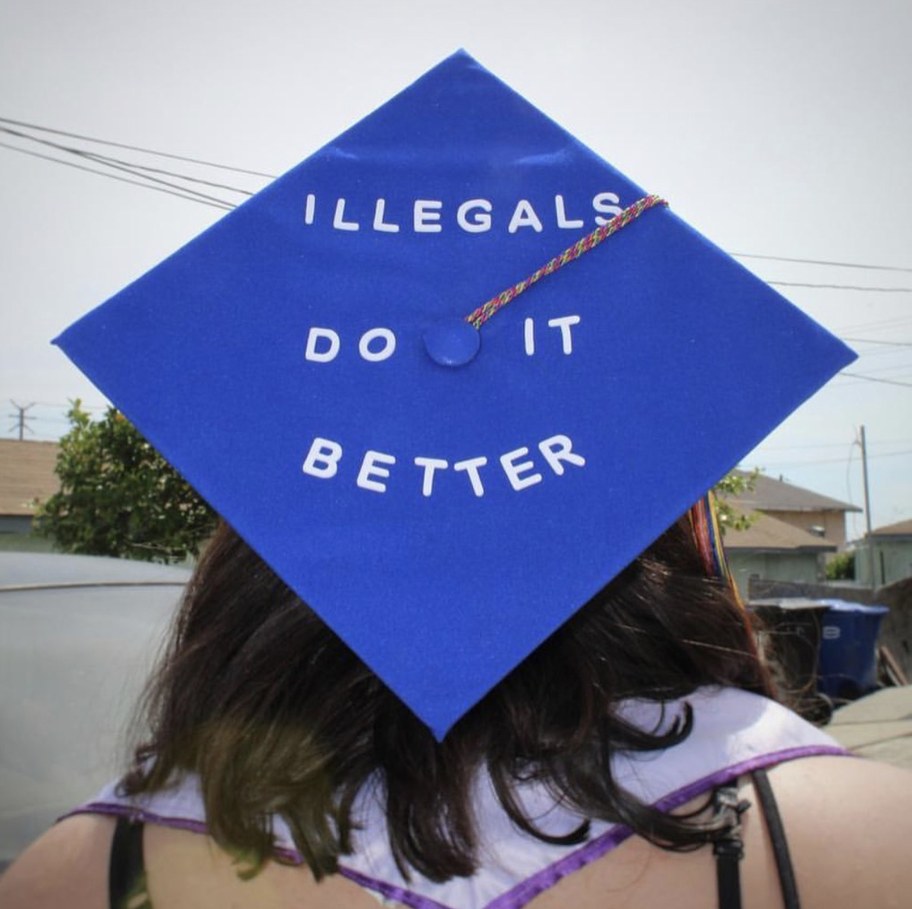 Did you think there are places you shouldn't go because it's too high profile? Were there things that you thought you shouldn't do?

“I remember my senior year, I got the opportunity to speak at Wondercon, which is like a comic convention. It was in Anaheim. And I felt like going through Orange County, I was a little scared. I don't really leave LA. There's a saying: You don't go south, you go more north, but not south, not close to the border.

That was the first time where I really did feel kind of like, ‘Okay, this is not my East LA bubble.’ I gotta be very smart with what I say and who I say it to.”

How is this for your family? Your father has been deported but other family members are U.S. citizens. That must have been scary for your mom and people like that.

“My mom for a long time really tried to overprotect me. But I mean, you can only do so much with a teenager. She tried to stop me from going to protests or just events where there would be police activity and I can only get in trouble. I just have to reassure her that she had my location. My friends … they wouldn't put me in danger. … [The] community would come out to support if anything were to happen”

It sounds like the Biden administration is a breath of fresh air for you, but at the same time, the administration needs to earn your trust and produce results. Is that fair to say?

“I really need some results. And I've seen people being scared that we will allow President Biden to do the bare minimum, because what he was left with was a mess and a very hurt country.

But at this point, I know what is right, and I know I deserve human dignity and humanity from politicians. So I'm not going to ask for the bare minimum from this administration.”

Are you worried about the fact that Democrats have such narrow majorities in Congress? Are you concerned that immigration could stall or get overlooked because of coronavirus relief and Trump’s impeachment trial?

“I do have those worries, but especially with the pandemic stuff, you have to include immigrants if you want to have a holistic vaccine plan, if you want to reopen this country or states. You have to have immigrants in that plan. If not, one, the virus can spread again. And two, the reputation of America has been broken. America always saw itself as number one. Well now it needs to show that it is number one. I doubt that people will allow for immigration to be kind of overshadowed by other issues.” Fully vaccinated Americans: What you can and can’t do Press Play with Madeleine Brand Mar 8

Fully vaccinated Americans: What you can and can’t do Press Play with Madeleine Brand