At the maximum security state prison Attica in upstate New York, more than 1000 inmates overwhelmed dozens of guards and civilian prison workers, and took control of the prison 50 years ago. They killed one guard and took the rest hostage. The prisoners demanded better treatment and living conditions.

Days of back-and-forth negotiations yielded no resolution, so New York’s governor, Nelson Rockefeller, ordered state troopers to retake the prison. The violence that followed left 29 inmates dead, and 10 of the hostages  were killed by law enforcement.

A new documentary looks at the biggest prison uprising in U.S. history. It’s called “Attica,” and it’s directed by Stanley Nelson and Traci A. Curry.

“The guards were especially cruel. The guards were not trained as guards. It was just a job. They came from what was almost an all-white town in Attica. There were no Black or brown guards in Attica,” Nelson tells KCRW.”

Despite the lack of diversity among Attica guards, the inmate population was primarily composed of Black and Puerto Rican prisoners, Curry explains. She says that racial divide helped fuel the rebellion. Guards also ran the prison through fear tactics and refused to talk to inmates.

Tensions mounted in the prison between guards and inmates, both knowing that something big was going to happen. And eventually the powder keg exploded — a fight among inmates then sparked the riot. Prisoners were then able to get their hands on a set of keys, which allowed them to unlock the cells and release the prison’s population of more than 2,000 inmates.

Soon afterwards, Curry says the men joined together: “There was absolute chaos originally, One of the [inmates] compares it to the wild, wild west. You know, every man is an island unto himself. But I think very quickly, there were some prisoners that realized that they had a very unique opportunity to push for some of the changes that they had been wanting to see.”

Leaders included those who were previously involved with political movements or religious leaders outside of Attica. Curry says they were able to bring order relatively quickly among the ranks of inmates.

After taking guards as hostages, many of the incarcerated men wanted to exact revenge on the guards. And although some were initially injured, but Muslim inmates were then tasked with guarding them because they didn’t believe in harming captives.

“Once they [had] gotten to the yard and realized the opportunity they had with the hostages, it strategically did not make sense to harm these people if [they’re] is your leverage to kind of exact some of the changes that you're trying to get,” Curry says. “It kind of naturally fell to the Muslims, which as part of their religious beliefs was you do not harm a defensive person. You do not harm a hostage. And so that sort of became their responsibility.”

Early on, Nelson says the inmates realized that they could harness the power of local TV stations as a form of protection. So they invited TV crews to tape daily life inside the prison.

“The cameras came in and filmed a lot of what was going on. It's just incredible footage of not only them setting up tents and food and digging the latrines, but also the day's progress of the negotiations, and the inmates making speeches,” Nelson says.

In a recorded speech, an inmate outlined some of their demands: “We want to be treated as human beings. We will be treated as human beings. We have come to the conclusion after close study, after much suffering, after much consideration, that if we cannot live as people, that we will at least try to die like men. You people do not understand. If you people do not stick with us. We are dead.” 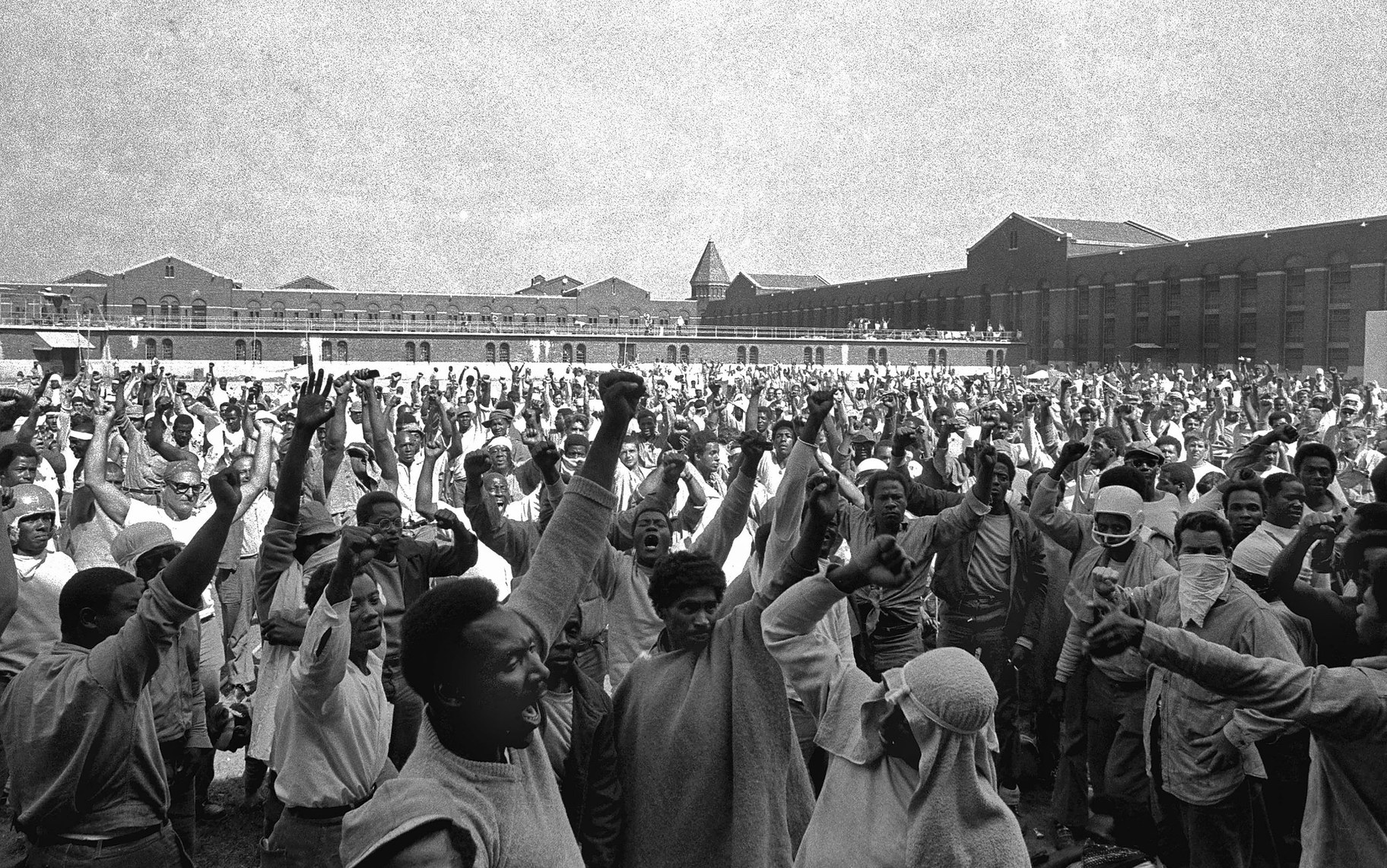 “One of the most remarkable things about the story is how quickly the prisoners were able to find some order out of the original chaos,” says ‘Attica’ co-director Traci Curry. Photo courtesy of Firelight Films.

Curry says demands were centered around human rights, such as religious freedom, more visitation hours, and access to basic goods, such as toilet paper. They also asked for changes to the prison system, such as an end to inmate brutality and amendments to the parole system.

“The essence of what [they were] asking for really was, ‘If we have to be in prison, we just want to be able to live here with dignity and these basic human rights that we should expect as human beings in the system,’” she says.

Prisoners also held leverage to bring in high-profile negotiators — a team known as The Observers Committee. It included intermediaries such as civil right attorney William Kunstler (who defended the Chicago Seven) and New York Times columnist and head of the Amsterdam News Tom Wicker. Nelson says they were chosen because they had been public supporters of prisoner rights.

How a guard’s death signaled the end

As a last ditch effort, members of the The Observers Committee urged Rockefeller to visit the prison. He refused, however.

“[They] said to him, ‘You don't have to go inside the prison. Just come and stand on the outside of the parking lot and just show your concern. The prisoners are tired and hungry, and maybe we can help find a peaceful solution to this thing.’ But Rockefeller refused even to do that. And I think that at that point, yeah, that was the last ditch effort to try to get a peaceful settlement. And when he refused, that was the nail in the coffin.”

Five days into the uprising, law enforcement stormed the prison. They used brute force, including tear gas and live ammunition. As a result, dozens of both inmates and staff were injured, and at least 43 people were killed.

“There was smoke everywhere so they couldn't even see. They [were] shooting randomly. It's unbelievable the amount of shooting. It lasts for like 7, 8, 9 minutes and just shooting in the fog, into the smoke. Anybody down there would get shot. There was no plan. There was just a need to show brute force to establish what they called law and order,” Nelson describes.

Curry adds that the raid was carried out by many members of law enforcement who didn’t have the proper training. She says that led to the lack of strategic execution seen.

“These people had been waiting outside of the prison, hearing all these horrible stories, getting angrier and angrier [and] more and more emotional. We know, as we see in the film, there was some racial animus there, and these were the state troopers. So these are the people that pull you over on the highway and give you a traffic ticket,” Curry says. “In some ways, it almost seems inevitable when you put all of those things together that it would have happened like this. What do you expect after four days of these people hearing that [hostages] are being tortured?”

Today, former Attica prisoners have lasting scars from the raid on Attica. Curry says some still have bullet fragments nestled inside their bodies.

Why the violence didn’t stop with the uprising

In the aftermath of the uprising, guards retaliated against inmates. Former inmates interviewed describe being tortured, stripped naked, and being forced to walk through glass. Nelson says it was important to show those images in the documentary.

Curry says small changes were instituted at the prison immediately after the rebellion. That includes the taking down of dividers that separated visitors and the quality of food improved.

But she says overall, there wasn’t much improvement. She credits that to Rockefeller passing the Rockefeller drug laws, which became a blueprint for drug-related incarcerations nationwide.

“[It] fueled mass incarceration and landed us in the situation where we're in today, where the United States has the largest prison population in the world. So I think there are certain things that you probably could point to and say, ‘This is better than that. There's some educational programs.’”

Curry adds, “But when we talk about,the story and the consequences writ large, I think it's hard to kind of point to anything and say that there has been any really substantive improvement in the carceral system.”

At the maximum security state prison Attica in upstate New York, more than 1000 inmates overwhelmed dozens of guards and civilian prison workers, and took control of the...