Steve "Woody" Culleton rebuilds his home in Paradise, CA after losing it to the Camp Fire. Photo courtesy of National Geographic.

On November 8, 2018, the Camp Fire tore through Paradise, California, killing more than 80 residents, destroying tens of thousands of structures, and causing tens of billions of dollars in damage. It was the deadliest and most destructive fire in California history.

Now nearly two years later, the town is slowly emerging from the ashes. That journey is the subject of a new documentary directed by Ron Howard. It’s called “Rebuilding Paradise.”

KCRW talks with two of the film’s subjects. Michelle John is the recently retired superintendent of the Paradise Unified School District. Steve “Woody” Culleton is a 40-year Paradise resident and the town’s former mayor.

KCRW: Michelle, can you take us back to the day of the fire?

Michelle John: “I started my morning at six o'clock in San Diego, and I was up in the foothills by 11. We had talked the night before about shutting down schools on that day because PG&E was saying they were going to turn off electricity. My response was ‘don't shut down schools’ because they've never shut down the electricity before and who knows what they'll do.

And thank God we didn't because if we would have shut down schools, there would have been hundreds of kids asleep in their beds — and parents would have left the hill already — instead of being on buses at schools. So when the calls first started coming in, I had to balance my personal life about finding my husband to finding out what's going on.

But by 7:30 in the morning, I'd already spoken with the fire chief, who I asked, 'Do we need to call schools?' And he had one word, he said 'now.' Then all communication went down. … So the next communication I really had, I got a few texts from principals. They knew what to do because we had plans, but every evacuation point was on fire.

Finally, one of my principals texted me after he had texted three or four times and his words were, 'We're getting the hell off the ridge.' And then one new principal texted me about, ‘Throwing kids in cars whether they know who the people were, there were no seatbelts, what do they do?’ And I'm like, 'Throw them in cars, just get them off of that hill.' We had staff members texting their husbands goodbye because they were caught in burning schools.

It probably took us a good 10 days to find everybody. So that day kind of melts into the next 10 days.” 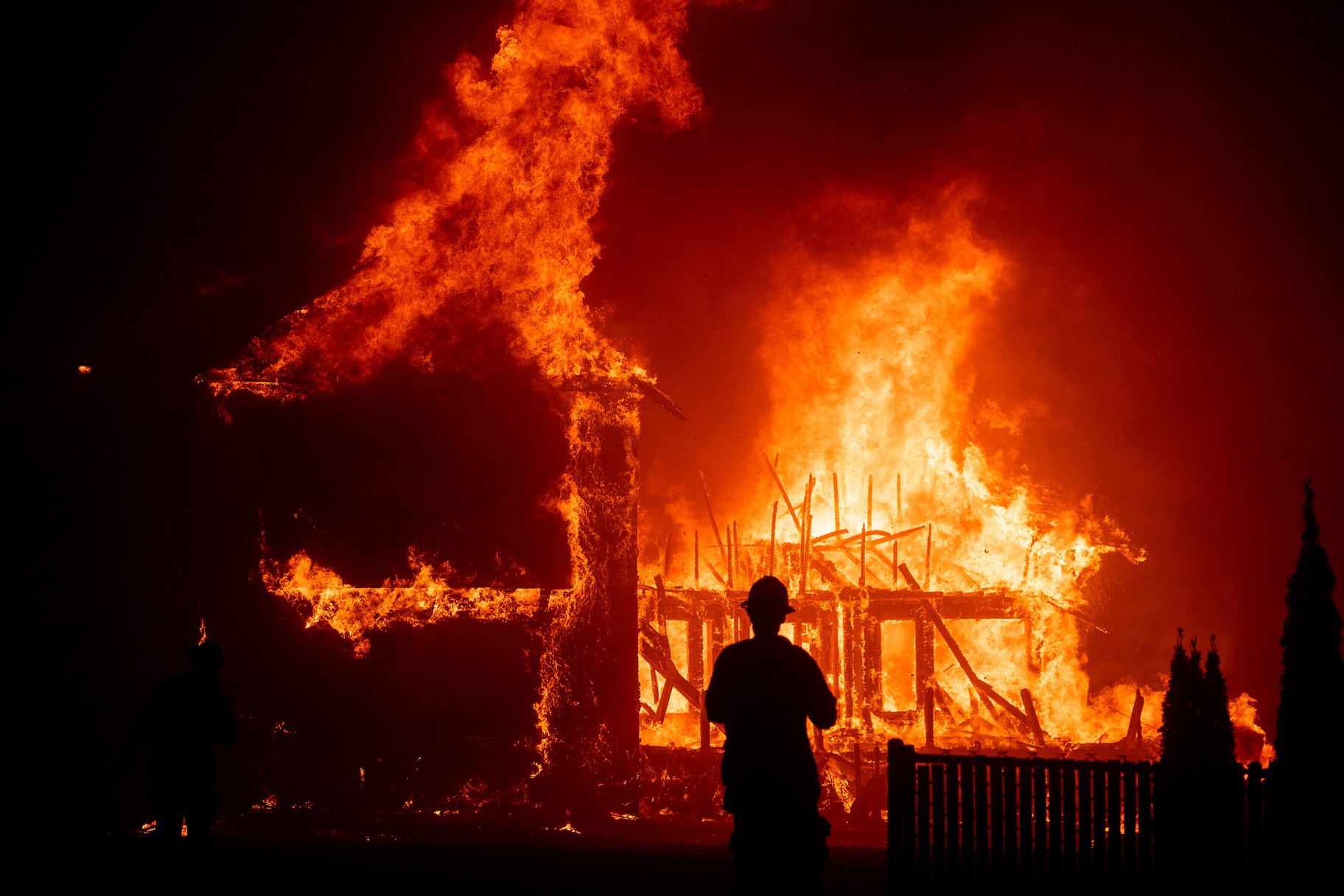 A home burns as the Camp Fire rages through Paradise, Calif., on Nov. 8, 2018. Photo by Noah Berger.

Woody, do you remember coming back to Paradise the first time after the fire?

Steve “Woody” Culleton: “Yeah. I used some of the connections I had with the local editor of the local newspaper. … We got into town on Sunday after the fire. None of the residents that were burned out were allowed back into town for a month. Nobody knew if their homes survived, nobody knew anything.

They're good friends that were trying to evacuate. … Every road was filled with cars. I have friends that had to abandon their trucks and their trailers. … About 100 people were put into Walgreens to try to save their lives, and then they were bussed out. So when we got back up on Sunday after the fire ... we helped get some people's cars and trailers to them.

We just drove around, took pictures, live streams, some video and stuff for people. So they know whether their house made it or not. It was pretty horrendous. I got into town on that Sunday, and I've been in town every day since.”

Michelle, your school district has nine schools. Eight of them were damaged and four were destroyed. Talk about the challenges of going back.

Michelle John: “I knew some semblance of the town would come back, it just was too early to tell. I knew that we were going to do our very best. Kids had lost everything. They'd lost their homes, some of them had lost relatives. And so I was determined to make sure they had their teachers and their friends somewhere, somehow. They were already through so much trauma that I needed to make sure that they had some kind of support.” 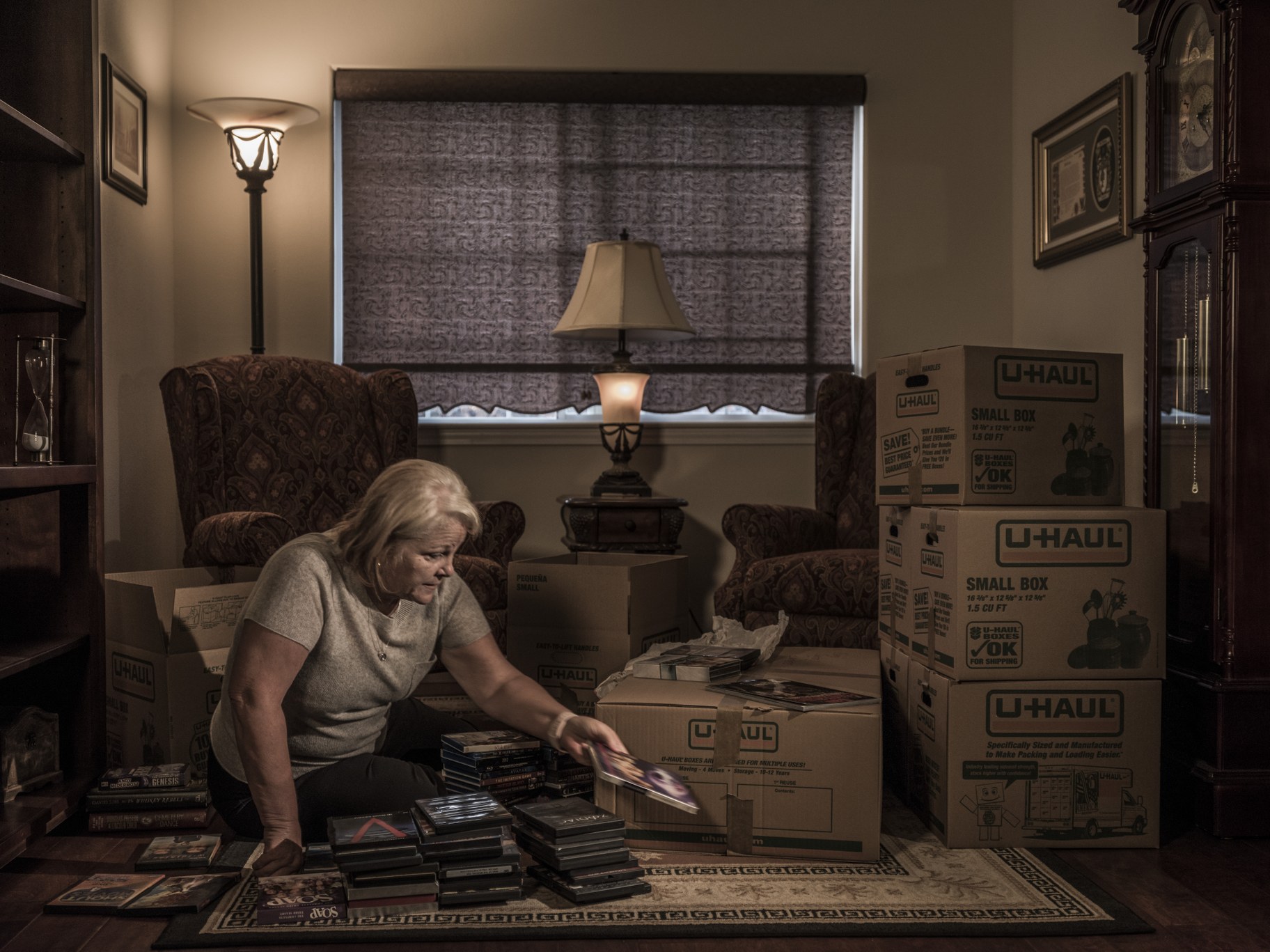 Michelle John, the emeritus superintendent of Paradise Schools, as she packs her home and prepares to move away from the town in the wake of the fire. Photo by Pete Muller/National Geographic.

The fire was a result of a faulty PG&E transmission line. There's obviously a lot of anger and mistrust towards them in Paradise. Woody, how do you feel now knowing what happened?

Steve “Woody” Culleton: “I had the current interim CEO of PG&E sitting in the living room of my new house about two weeks ago. And he spent an hour into everything I had to tell him about PG&E. Yeah, they're at fault, but it's the abuses that went on afterwards.

It was everybody. It was all of corporate America. The news crews that were here. Nobody really took the time to get to know who we were or how we felt. They came in to take their pictures, to get their little clip for the six o'clock news. That's where my anger is at. It's beyond just PG&E.”

Michelle, throughout that first year, your high school seniors wanted to make sure that they could graduate on their football field. But they weren't able to do that. Why not? What were some of the obstacles?

Michelle John: “It was safety. They told me it was water. ... There was a protected stream behind the high school, it was a protected watershed. I'm thinking, ‘Well, we have no water anyway, our water has benzene in it right now, what are you talking about?’ And then they said that there were some protected owls. I love our environment, but the trees were dead. I don't know why the owls were in there.

Then it really came down to FEMA. We had over $1 million worth of tree damage on the high school property that needed to come down before anyone could step foot on that property. Of course the district didn't have $1 million. Our insurance, although we had very good insurance for our buildings, we did not have insurance like that for trees. The FEMA process is years. And the red tape. I think probably when I told them I was going to get my chainsaw, they really started listening.

There's one thing those kids asked for, they asked to stay together. That's where they ended up in the big Facebook building down there, clear an hour-and-a-half drive for most of them every day each way. And then they asked to graduate on the same field that most of their parents and grandparents had graduated. That's all they asked. …

They really stuck in there. They were living in tents and trailers and coming miles and miles to school out to an airport, and they just wanted to be together and graduate. So I was going to do everything and anything I could to make sure that we could at least give those kids that.” 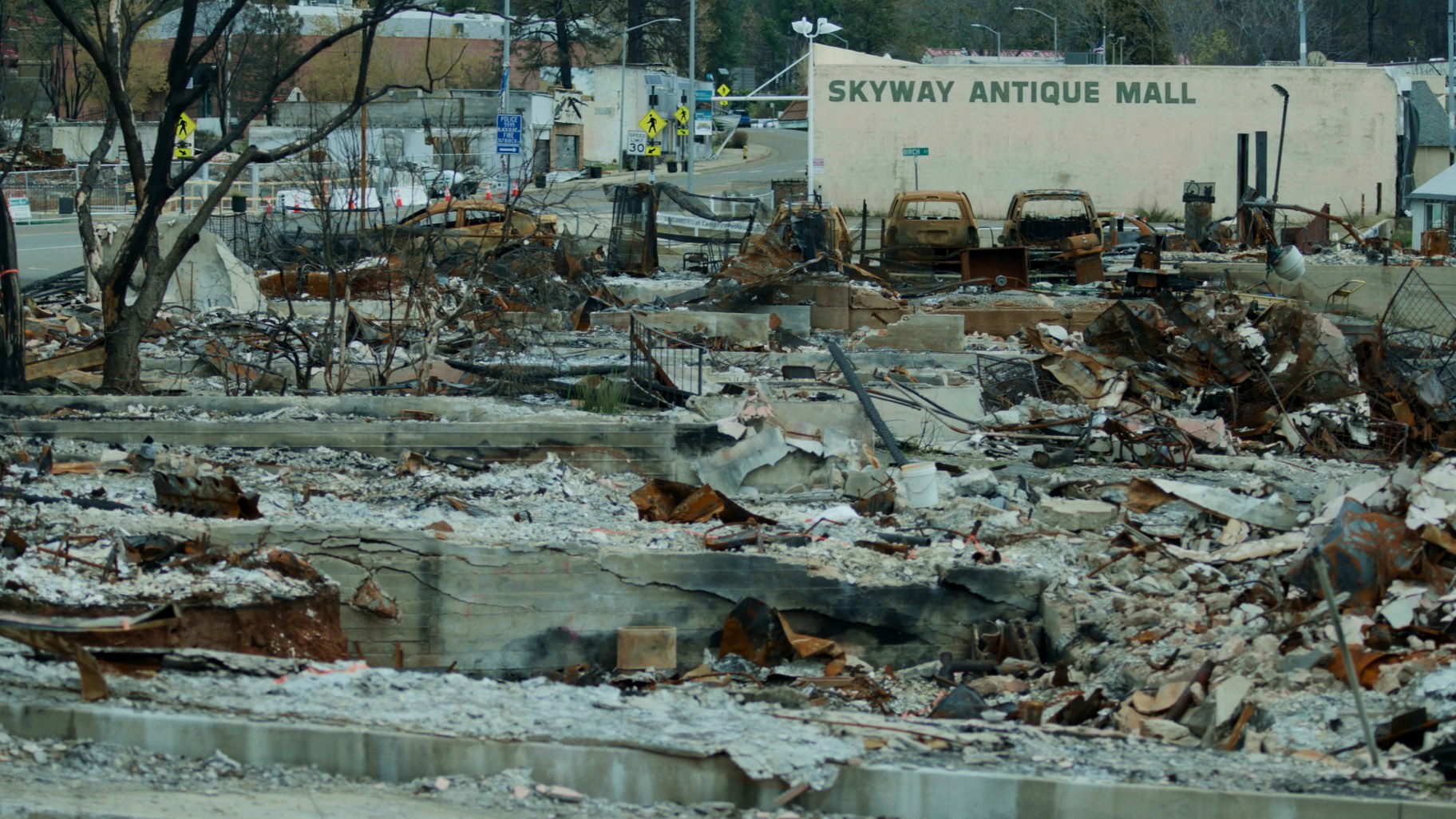 There’s a lot of frustration about PG&E and FEMA, but this film is full of small beautiful stories as well, like the kids getting to graduate on their football field.

Michelle John: “I was just so happy for the kids. And to be honest, I was so thankful for everyone that helped us do that. People donated their time and their equipment. That's the only way we could have gotten it done because there was no money to pay for that.

Gavin Newsom was involved because you just can't have people come on to a public school and cut down trees, no matter what happened. … So they cut through the red tape to make sure that these people could come donate their time and get those trees down so it was safe for those kids to be on that field. … Every day, I'd say ‘Okay, what now? Because we're going to work our way through this.’”

But it was just us, we're helping one another. You call on favors, and you don't give up. Like Michelle said, 'Okay, if you're not going to give me a solution to this, I'm going to go get my chainsaw, and I'm going to cut the damn tree down.' That's what it takes and that's what we do. We help one another.

Right now in the rebuild a year and a half later, 300 homes have been rebuilt and occupied. We've got 800 or 900 permits that have been issued. We have businesses coming back. …

We're all helping one another. There are websites and Facebook pages of survivors where people say, 'Hey, I'm living out of state, I moved, who can clean my lot of all the weeds that have grown up?' So we give them names of people. ‘I need a surveyor or I need an architect.’ And that's what we're about. And that's what we're doing.”