Ever since Donald Trump became president, his opponents have worried that he signalled a democracy in peril. What might democracy look like after Trump leaves the White House? Image by David Mark from Pixabay

Until late Tuesday, Christopher Krebs was the top Trump administration official overseeing election security. The branch of the Department of Homeland Security he led put out a statement last week saying the 2020 election was the most secure in American history. That totally contradicts more than two weeks of unsubstantiated claims by Trump of widespread voter fraud. Trump ended up firing Krebs — via Twitter.

Honored to serve. We did it right. Defend Today, Secure Tomrorow. #Protect2020

KCRW speaks with Steven Levitsky and Daniel Ziblatt, government professors at Harvard and authors of the 2018 book “How Democracies Die.” 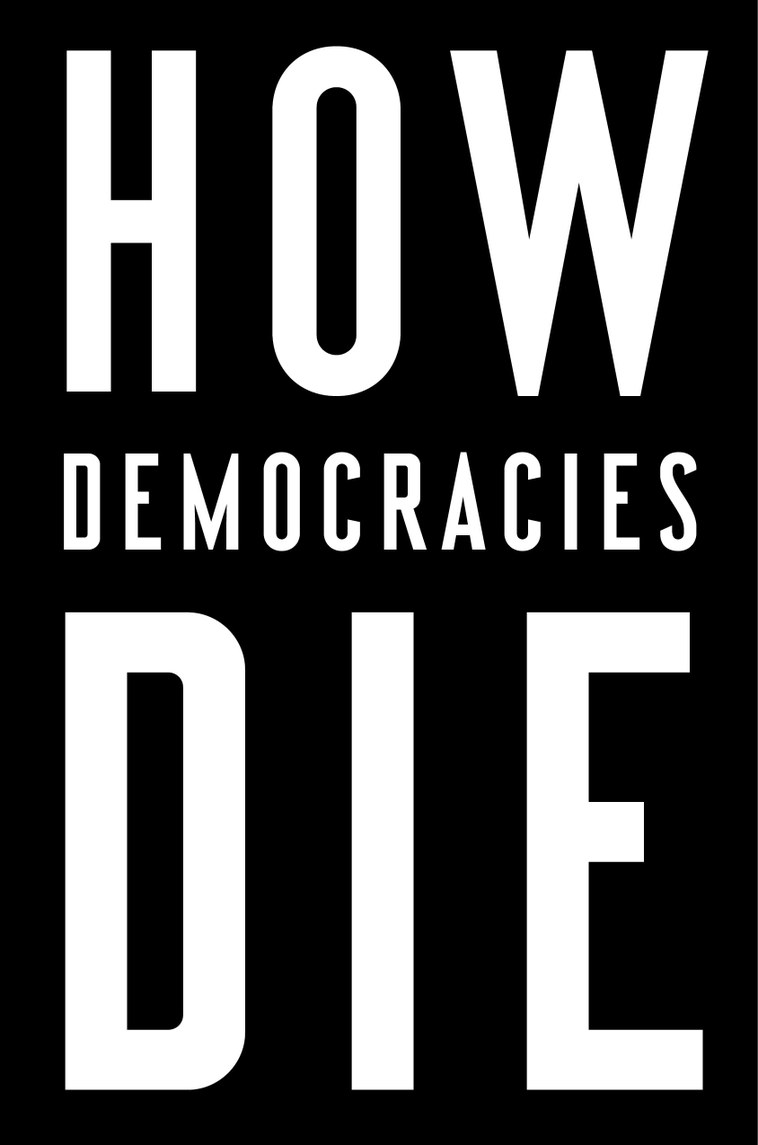 “How Democracies Die” is a 2018 book by Harvard government professors Steven Levitsky and Daniel Ziblatt.

Excerpted from How Democracies Die by Steven Levitsky and Daniel Ziblatt.

We tend to think of democracies dying at the hands of men with guns. During the Cold War, coups d’état accounted for nearly three out of every four democratic breakdowns, and more recently, military coups toppled Egyptian President Mohamed Morsi in 2013 and Thai Prime Minister Yingluck Shinawatra in 2014. In these cases democracy dissolved in spectacular fashion, through military power and coercion.

But there is another way to break a democracy. It is less dramatic but equally destructive.

In Venezuela, for example, Hugo Chávez was a political outsider who railed against what he cast as a corrupt governing elite, promising to build a more “authentic” democracy that used the country’s vast oil wealth to improve the lives of the poor. Skillfully tapping into the anger of ordinary Venezuelans, many of whom felt ignored or mistreated by the established political parties, Chávez was elected president in 1998. As a woman in Chávez’s home state of Barinas put it on election night, “Democracy is infected. And Chávez is the only antibiotic we have.”

When Chávez launched his promised revolution, he did so democratically. In 1999, he held free elections for a new constituent assembly, in which his allies won an overwhelming majority. It wasn’t until 2003 that Chávez took his first clear steps toward authoritarianism, stalling a referendum that would have recalled him from office. In 2004, the government blacklisted those who had signed the recall petition and packed the supreme court. The chavista regime grew more repressive after 2006, closing a major television station, arresting or exiling opposition politicians, judges, and media figures on dubious charges, and eliminating presidential term limits so that Chávez could remain in power indefinitely. After Chávez’s death a year later, his successor, Nicolás Maduro, won another questionable reelection. It was only when a new single-party constituent assembly usurped the power of Congress in 2017, nearly two decades after Chávez first won the presidency, that Venezuela was widely recognized as an autocracy.

This is how democracies now die. Blatant dictatorship—in the form of fascism, communism, or military rule—has disappeared across much of the world. Military coups and other violent seizures of power are rare. Most countries hold regular elections. Since the end of the Cold War, most democratic breakdowns have been caused not by generals and soldiers but by elected governments themselves. Like Chávez in Venezuela, elected leaders have subverted democratic institutions in Georgia, Hungary, Nicaragua, Peru, the Philippines, Poland, Russia, Sri Lanka, Turkey, and Ukraine. Democratic backsliding today begins at the ballot box.

How vulnerable is American democracy to this form of breakdown? The foundations of our democracy are certainly stronger than those in Venezuela, Turkey, or Hungary. But are they strong enough? Answering such a question requires stepping back from daily headlines and breaking news alerts to widen our view, drawing lessons from the experiences of other democracies around the world and throughout history.

We know that extremist demagogues emerge from time to time in all societies, even in healthy democracies. The United States has had its share of them, including Henry Ford, Huey Long, Joseph McCarthy, and George Wallace. An essential test for democracies is not whether such figures emerge but whether political leaders, and especially political parties, work to prevent them from gaining power in the first place—by keeping them off mainstream party tickets, refusing to endorse or align with them, and when necessary, making common cause with rivals in support of democratic candidates.

Once a would-be authoritarian makes it to power, democracies face a second critical test: Will the autocratic leader subvert democratic institutions or be constrained by them? America failed the first test in November 2016, when we elected a president with a dubious allegiance to democratic norms. How serious is the threat now? Many observers take comfort in our Constitution, which was designed precisely to thwart and contain demagogues like Donald Trump. Our Madisonian system of checks and balances has endured for more than two centuries. It survived the Civil War, the Great Depression, the Cold War, and Watergate. Surely, then, it will be able to survive Trump.

We are less certain. Historically, our system of checks and balances has worked pretty well— but not, or not entirely, because of the constitutional system designed by the founders. Democracies work best— and survive longer— where constitutions are reinforced by unwritten democratic norms. Two basic norms have preserved America’s checks and balances in ways we have come to take for granted: mutual toleration, or the understanding that competing parties accept one another as legitimate rivals, and forbearance, or the idea that politicians should exercise restraint in deploying their institutional prerogatives.

The erosion of our democratic norms began in the 1980s and 1990s and accelerated in the 2000s. By the time Barack Obama became president, many Republicans, in particular, questioned the legitimacy of their Democratic rivals and had abandoned forbearance for a strategy of winning by any means necessary. Donald Trump may have accelerated this process, but he didn’t cause it.

The weakening of our democratic norms is rooted in extreme partisan polarization— one that ex-tends beyond policy differences into an existential conflict over race and culture. And if one thing is clear from studying breakdowns throughout history, it’s that extreme polarization can kill democracies.

There are, therefore, reasons for alarm. Not only did Americans elect a demagogue in 2016, but we did so at a time when the norms that once protected our democracy were already coming unmoored. But if other countries’ experiences teach us how democracies can die at the hands of elected officials, they also teach us that breakdown is neither inevitable nor irreversible.

Many Americans are justifiably frightened by what is happening to our country. But protecting our democracy requires more than just fright or outrage. We must be humble and bold. We must learn from other countries to see the warning signs— and recognize the false alarms. We must be aware of the fateful missteps that have wrecked other democracies. And we must see how citizens have risen to meet the great democratic crises of the past, overcoming their own deep-seated divisions to avert breakdown. History doesn’t repeat itself. But it rhymes. The promise of history, and the hope of this book, is that we can find the rhymes before it is too late.