“We kept telling people, ‘We know you're angry, we know you're frustrated. But let the music absorb that so we can have level heads to strategize to move forward,’” says musician Terence Blanchard. Photo by Henry Adebonojo.

Spike Lee’s latest film, “Da 5 Bloods,” tells the story of four black Vietnam War veterans who return to Saigon to recover the body of their squad leader. Nearly a quarter of the American forces in the Vietnam War were Black, a disproportionate share of men who saw combat. Many came home with physical and psychological wounds that never healed. The war film deals with themes of race, patriotism, allegiance and brotherhood.

Jazz musician Terence Blanchard composed an original score for the film. He worked with Lee on the 1989 film “Do the Right Thing” and more than a dozen of Lee’s films since then.

He talks with KCRW about how he composed music for “Da 5 Bloods” and his experiences living as a Black father in America.

This movie is a drama, but Lee weaves in elements of documentary footage. What he's trying to do with this movie?

Terence Blanchard: “What I think Spike has always been brilliant at doing is taking fiction and mixing fiction, comedy, and reality all in one thing. And I think he had a beautiful cast to do just that. Delroy Lindo and the rest of the cast, Clarke Peters. Those guys have range, they're amazing actors. They made it seem effortless. When I watched this film, as I was working on it, I was just totally amazed at how they can stretch and go from one idea to another.”

“What’s This Mission About?” is part of the score for the movie. What was the process behind writing it?

“Every time I talk about that [music] cue, I get the sweats. … It took me five days to write that cue. When I saw this scene, the scene is [sic] brilliantly shot and edited and acted. I think it's a classic movie scene. There was so much detail in it that I didn't want to miss anything. It's one of those things where when I first started to work on it, I said, ‘Oh man, it has to be big.’ But I'm like, ‘Well, it has to get bigger and then it has to get bigger.’ So I decided to just plot out the entire scene. Just the piano. And that took me about two or three days.”

Could you describe what we're seeing when we hear that music?

“We're seeing the initial mission that these guys were on with their brother, where they were transporting some material. They didn't actually know what it was at first, and then they are engaged in a firefight. With this film, what I loved about it, it allowed me to exhaust all of my love for brass and percussion music. I got a chance to write for full brass, full orchestra and a huge percussion section.

The challenge with Spike's films is that Spike really loves very thematic material for his films. And sometimes, you have to figure out a way to make that melody support what's happening onscreen. And it could be a bit of a challenge, but we've been doing it so long, which kind of worked out of style. I think that works on both fronts.”

How did you and Spike Lee first meet?

“I was just hired as a session player on ‘Do the Right Thing’ or in ‘School Daze.’ I forgot which one came first. And I had a Lakers t-shirt and Lakers hat, and I had my Magic Johnson High Top Converse shoes on.”

… As I walked in, he just looked at me and said, ‘Lakers fan, huh?’ And then I said, ‘Yup, definitely.’ Next thing I know, I'm sitting courtside at Madison Square Garden.”

… I became a Knicks fan [Spike Lee is a Knicks fan]. I mean, I was still a Laker fan, don't get me wrong. I got a chance to go to some of those championship games with Spike, and I had a great time. As a matter of fact — he probably doesn't even remember this — one time I went, he kicked my Cracker Jacks all over to court, and they thought I did it. Luckily it happened right in the middle of a timeout or something. The [referee] came over and goes ‘Hey, hey, hey!" I was getting ready to point at Spike, and I said, ‘My bad man, and I'm sorry. It won't happen again.’”

There's a flashback of men finding out that Martin Luther King was assassinated while they were on their mission, and all the guys fire their guns in the air. What were you thinking about when you were composing the scene’s music?

“I kept thinking about the irony of these guys risking their lives for a belief of freedom, and having someone who represented the real idea of what that is murdered, a person who was fighting for their rights, murdered in cold blood while they were fighting for everyone else's freedom. I know that being a part of the fight was an honorable thing for a lot of those guys, and feeling like the world and the country is moving forward. But to have that happen in the midst of this other fight had to be a sobering jolt and shock to the system.

… It sounds like exactly what's happening right now. I think it's one of those sad moments in time when you think that we've moved the needle a little further, and it hasn't moved as far as we thought we'd moved it.” 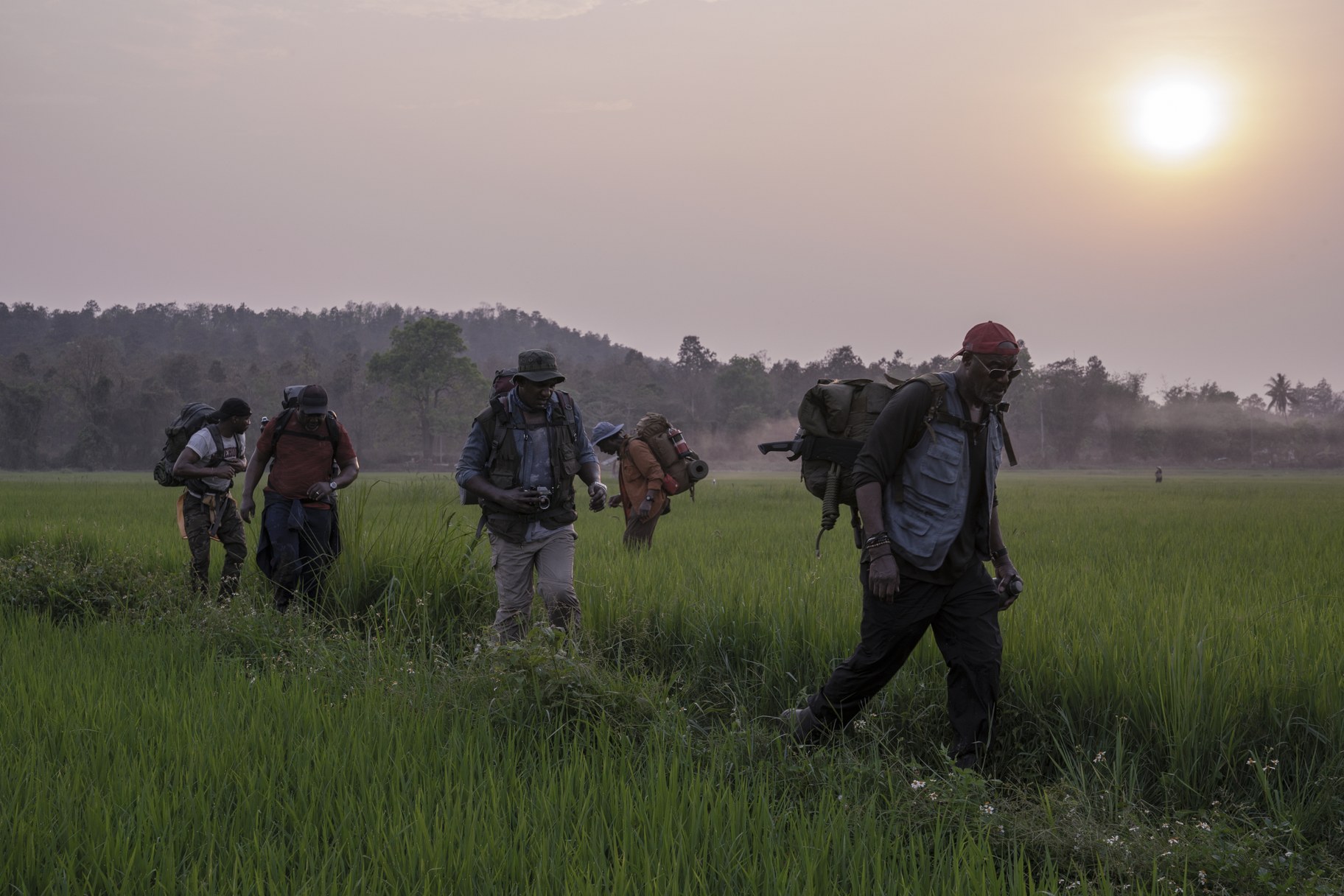 “Da 5 Bloods” tells the story of four black Vietnam War veterans who return to Saigon to recover the body of their squad leader. Photo courtesy of Netflix.

Your 2015 album ‘Breathless’ came out after the death of Eric Garner in New York. His last words were “I can't breathe,” which is what George Floyd also said. What comes into play when you’re thinking about Eric Garner and George Floyd?

“When I first heard about George Floyd and I saw the video, I kept saying to myself, ‘This can't be happening again. Not the same three words.’ The ironic thing is that on ‘Breathless,’ the tune itself, my son is doing the spoken word and he himself had a run-in with the police that wasn't pleasant. A woman accused him of breaking into her house when her husband came home early. The guy followed my son to school and seven police cars entered the school building and handcuffed my son and put him in the back of the car.

Luckily, my son is a very soft-spoken, even-tempered guy. The other thing that was a godsend was one of the cops there on the scene was a guy who literally grew up in the house behind mine. He saw my son in the car and he said, ‘I know this kid, and I know this kid didn't break into anybody's house.’ But just the idea that seven police cars were called, I was scared to death because you don't know what could have happened in any of those situations, you know?

So I got my son to do the spoken word for that particular tune, and I thought he did a great job. The sad part about it is we were talking about possibly re-releasing his tune to help people heal. That was our thing when we first did it. We kept telling people, ‘We know you're angry, we know you're frustrated, but let the music absorb that so we can have level heads to strategize to move forward.’”

It must be so dispiriting that you have to re-release it now again.

“It's sad. It's like when we did it, we kept thinking that this is something that should never happen again. It is just unfathomable to think that this could happen again the way that it happened — over eight minutes of leaning on someone's neck. It's something I can't fathom. To think that his family had to sit down and watch that on video breaks my heart. It breaks my heart that he has a daughter he's left behind.

It's just such a callous thing where people can look at other people and not see value in someone else's life. It's something I just never could understand because I grew up in the church. I grew up with a certain belief system that we're all here to learn how to love one another. And to think that there are people out that cannot compute or comprehend what that means, it's very, very scary and sad.”

The whole idea of breathing is something that most of us don't even have to think about.

“It's something you never think about. The one thing that I was thinking about was how can you restrict someone's breathing while breathing yourself? To me, it's a true act of evil, when I look at it. I've watched that a couple of times. The other people that I really feel sorry for were the people who had to witness it live, because a man is dying. And your reaction is to help someone in distress. And to think that the people who have that phrase painted on the side of their car, ‘to protect and serve,’ are the very people who are preventing you from helping someone in distress — is absurd.”

The fight to end qualified immunity for cops

Several Democratic lawmakers in the House and Senate want to overturn qualified immunity, a 50-year-old Supreme Court doctrine that’s been used to protect police accused of...

While protests in major cities like LA, New York and Chicago got a lot of national attention, small, rural towns across America were holding protests of their own.

KCRW reporter Anna Scott has spent the past year following one woman, Christine Curtiss, through LA’s homeless services system, and getting to know the neighbors who ended...

Terence Blanchard talks with KCRW about how he composed music for “Da 5 Bloods” and his experiences living as a Black father in America.