Sam Dickinson at the Tajiguas Landfill in Santa Barbara Photo by Kathryn Barnes/KCRW.

The hilly canyon looks like a lot of other canyons you pass while heading up Highway 101, but on this piece of land, the terraced, hilly landscape is in fact decades and decades of trash piled up in layers, like lasagna.

“It used to be a canyon that has been filled in with a layer cake of trash and dirt again and again, for 200 to 300 feet deep,” said Sam Dickinson, the program specialist for the Santa Barbara County Resource Recovery and Waste Management Division. “Once we get to a certain height, we cap it off and start landfilling somewhere else.”

Santa Barbara County has buried about 200,000 tons of annual trash here since 1967, but not for much longer. The landfill is expected to hit its capacity in about six years. However, plans are in motion to extend its life expectancy by another decade through the Resource Recovery Project. 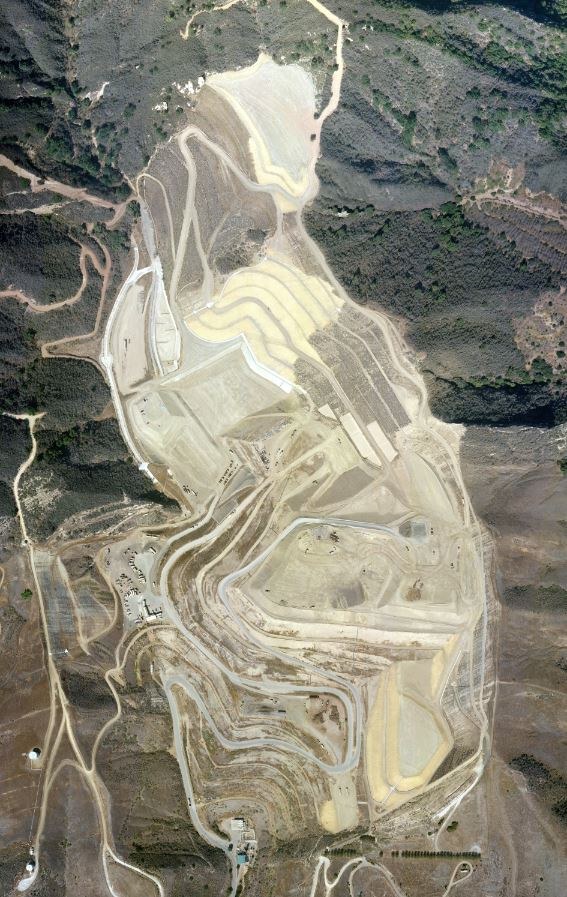 An aerial shot of the Tajiguas Landfill Photo credit: County of Santa Barbara

What gets dumped there

Of the 200,000 tons of waste each year that gets buried at the landfill, about 37 percent is organic material, like coffee grounds or orange peels. Twenty percent is construction and demolition material, like treated wood and insulation. About 24 percent is paper and plastic that either wasn’t or can’t be recycled.

“You just have to imagine a lot of what’s in here could have been reused, recycled or composted,” said Dickinson. 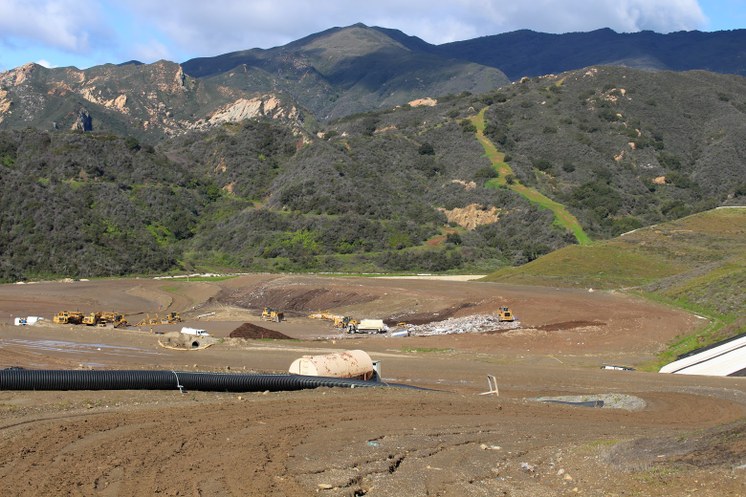 Waste gets delivered, spread out and flattened for about three days before a layer of dirt is spread over it, and the process starts again. Photo credit: Kathryn Barnes/KCRW.

Why isn't recycling the answer?

The county is recycling things like glass, aluminum, dry paper and plastics 1 and 2, but there’s no economic market for plastics 3 through 7 ever since China stopped buying them. So if you throw a plastic grocery bag or yogurt cup in your blue bin, it’ll make its way to a recycling center but ultimately be sent to the landfill.

Secondly, recycling takes a lot of energy. Glass has to be melted, paper turned back to pulp. It all has to be repurposed, which takes energy.

And lastly, a lot of recyclables get shipped long distances. Mixed paper, for example, gets bailed up and sold to Vietnam, which requires fuel.

According to Dickinson, reducing and reusing is a much better way to lessen your carbon footprint than recycling. Buy a reusable coffee mug. Shop at the farmers market where the produce doesn’t come prepackaged. And if you have to buy something in a container, Dickinson recommends choosing something that stays in California like glass (which often gets turned into wine bottles), plastics 1 and 2 (which are often turned into plastic berry containers) and aluminum.

The county doesn’t compost food scraps for residents, but it does offer discounted compost bins. If you live in Goleta, they’re free! Keep in mind that if you order to-go food from your favorite restaurant in a compostable container, it won’t get composted unless you do it yourself. If you throw it in the trash or recycling, it’ll get buried in the landfill just like all the other food waste.

The county accepts food scraps from some restaurants and schools, and turns green waste into mulch. 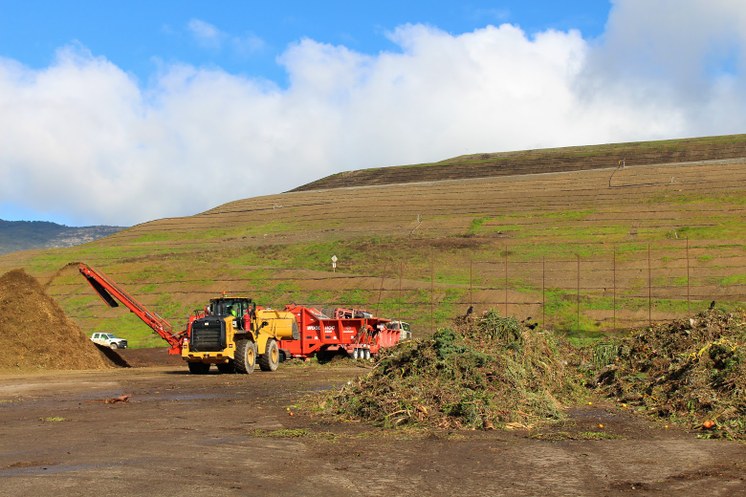 Green waste gets turned into mulch and distributed throughout the county, including to residents. Photo credit: Kathryn Barnes/KCRW

Landfills produce a lot of methane, which is a major contributor to climate change. The good news? 75 percent of the methane created at the Tajiguas landfill is being captured and turned into electricity -- enough to power 2,500 homes a year actually. The bad news? The other 25 percent is getting released into the air. That’s the equivalent of 20,000 cars on the road each year.

To extend the landfill’s life expectancy, the county is beginning to build the Tajiguas Resource Recovery Project, and plans to open the facility in 2021.

“There’s going to be a materials recovery facility to sort through the trash -- using screens, fans, people, magnets, optical sorters,” said Dickinson. “We’re going to basically capture all the missed recyclables and organics from the trash. The recyclables will be sold as a commodity. The organics are going to be loaded into an anaerobic digester, and we’re going to be capturing the methane gas and get a compost product from the material.” 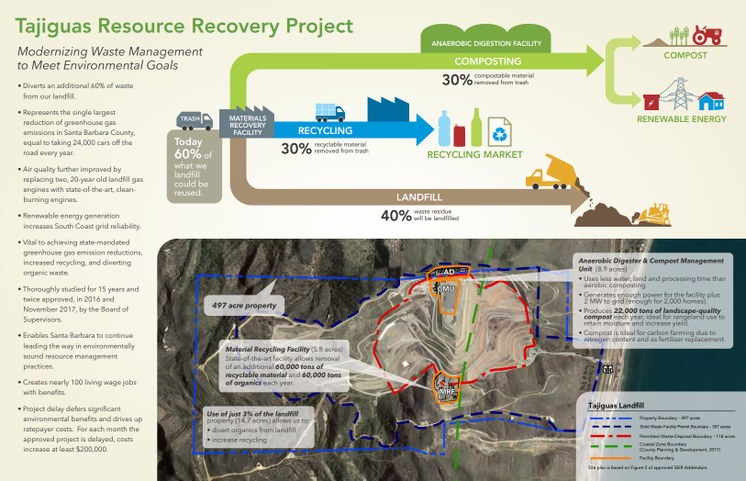 When it's up and running, the Tajiguas Resource Recovery Project will capture and divert recyclables and organic matter in order to reduce methane emissions and extend the life of the landfill. Photo courtesy of County of Santa Barbara

In other words, the county isn’t composting at Tajiguas right now, but soon it will be! That food waste will still produce methane since the system uses anaerobic rather than aerobic decomposition, but the county will be able to capture 100 percent of that methane since it’s in a controlled facility rather than a dirt pile. Once that compost gets dried out, it’ll be sold within the county to places like golf courses, parks and farms.

What happens when the landfill inevitably fills up?

Once Tajiguas hits its capacity, waste will get exported to another landfill, likely in Santa Maria or Simi Valley.

The Resource Recovery Project will continue to run until at least 2041.

According to the Santa Barbara Independent , a sheriff’s deputy and a mental health outreach worker found 16 weapons after visiting a potentially suicidal 27-year-old man...

In a new documentary, ‘The Human Element,’ National Geographic photographer James Balog travels the country to show how water, earth, air and fire have all been impacted by...