New York City has more COVID-19 cases than any other city in the United States. Can it survive the pandemic? Photo credit: Pixabay.

Disease has thrived among dense populations since cities began. But COVID-19 is the worst example since 1918, and New York City is America’s primary victim, with empty streets and skyscrapers.

Warren Olney: You call cities “our greatest invention.” Why?

Facebook, Google and Apple have invested in open-plan work spaces. Now Facebook says its employees who can work from home should continue to do so until the end of 2021. How do big businesses feel about telecommuting long-term?

“We recently took a poll of the National Association of Business Economists, asking how many of their workers would stay working from home after COVID-19. And between a third to a half of them were likely to stay home. So as people transition [to working from home], that will decrease the demand for commercial real estate. But I think that will be a five-year to seven-year blip.

If we can deal with the disease, the strength of cities is so strong that they will come back. The one constant safe harbor for American workers has been in the service industry. People will still pay for a latte, served with a smile, for a piece of cake that comes with someone telling you, ‘You look great today.’ That human edge remains the most employable asset of Americans, and those people are going to need jobs, and they're going to need cities.”

Is it density that makes cities particularly vulnerable to disease?

“It’s not that cities have a lot of people in them per se, but that cities have tended to concentrate poverty. So even in one of the wealthiest cities in the world, New York City, half the population lives at or near poverty. And that's what is posing the risks. Because when people are poor, they can't afford to pay rents, so they end up squashed up together and overcrowded apartments. They may live far from their workplaces and have long commute times, which they accomplish by crowding onto public transport, buses or subway cars. So it's these conditions that made New York City ripe for COVID.

Many people who are poor, who are living under crowded conditions, work in surface jobs that were defined as essential and had to work because they couldn't afford not to work. Those are the conditions, not the density of the city that has made New York City so vulnerable.” 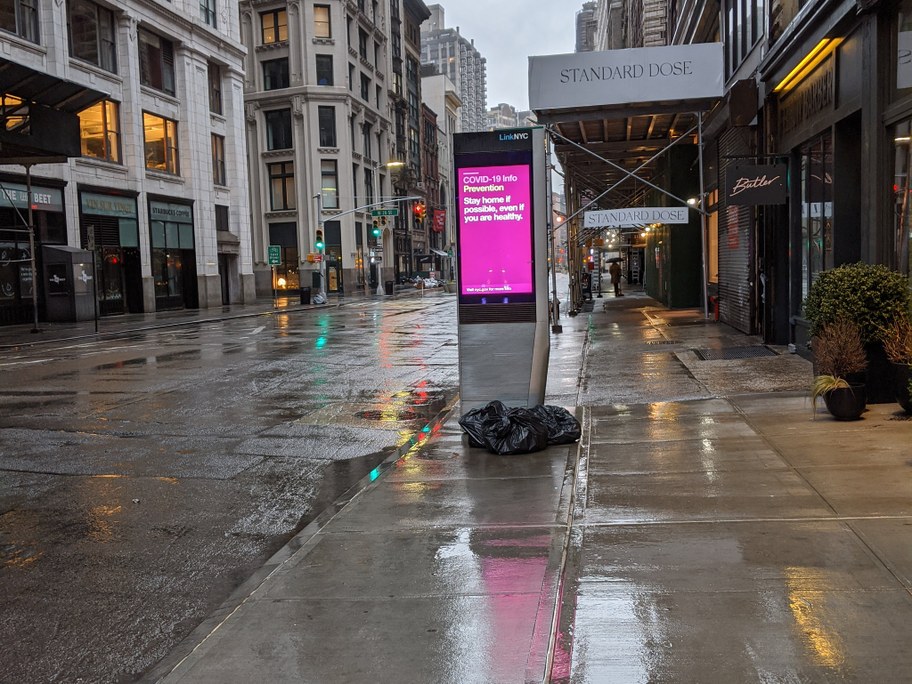 A sign in Manhattan says, “Stay home if possible, even if you are healthy.” Credit: Eden, Janine and Jim (CC BY 2.0).

Olney also speaks with Richard Haass, a veteran of four presidential administrations and now president of the Council on Foreign Relations. His new book is titled “The World: A Brief Introduction.” Olney asks Haass to elaborate on this quote from his book: “We exist in a moment when history is being made.”

Haass says with the emphasis on STEM (science, technology, engineering and mathematics), history is something Americans learn little about, and certainly not enough to carry out global obligations or even self-govern.