It’s called Bird, it powers it along at a top speed of 15 miles an hour, it is booked and located via an App; and after arriving at his or her destination the rider simply leaves the Bird on the sidewalk or in a parking lane (rather than seeking a parking station like Breeze Bikes). The company gathers them up and recharges them overnight. Judging by the number of them now whizzing along the streets of downtown Santa Monica, these motorized scooters have been an instant hit. But the Birds, founded by an Uber alumnus named Travis VanderZanden and headquartered in downtown Santa Monica, have also raised concerns at City Hall. On the face of it, Birds appear like a perfect solution to the First Mile Last Mile problem, and provide an easy, sustainable, space-saving mode of transportation, but the city’s justice department has filed a criminal complaint against the company. Why?

DnA talks to Anuj Gupta, deputy city manager, and learns that while, yes, the City does embrace Birds for all these reasons, “the challenge is that they have been operating in our city without a business license to operate,” they present a “public safety concern because of the fact that these scooters are in the public right of way,” and “they are operating in the public right away without a permit to do so.”

One of the other problems is that Birds are classified in California vehicle code as electric motorized scooters, meaning you have to be over 18 to use them and have a driver's license. And yet middle and high schoolers have taken to them like proverbial ducks to water.

Gupta says the City hopes to arrive at a mutually beneficial arrangement with Bird. “We as a city I think are very excited by the notion of Bird, particularly because they are a homegrown  business and because Santa Monica is a place that is a hotbed of innovation. We stand ready to sit down and partner with them on a way to get their devices onto the streets.”

He adds, “This is just the beginning of a whole new series of devices that we're likely to see. We may need to develop new regulatory approaches to these devices. But we need to do that and then partner with the companies to invite them in and design systems that accommodate their models.”

VanderZanden told DnA in an email: “We are looking forward to working with the city so that we can create sensible, modern regulations for new kinds of technologies like ours that are helping to solve the last mile transportation problem.”

What this means for the teens who love this new mode of transit, however, is unclear. DnA also talks to transportation expert Juan Matute and four Bird users, named Rose, Nemo, Ruby and Kalea. 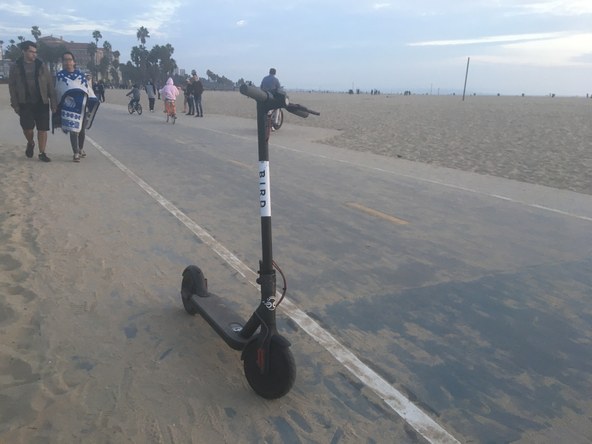 A Bird scooter left on the Santa Monica boardwalk. Photo by Avishay Artsy.

You don’t have to be Elon Musk to pitch an idea for improving mobility in Los Angeles. Say you have an innovative idea for helping Angelenos get around the region. Who do...