The late LA artist Mike Kelley was long preoccupied with Superman comics, specifically the mythical city Kandor, capital of the planet Krypton. Now, if you go to Hauser & Wirth Gallery in downtown LA’s Arts District you can find “Mike Kelley Kandors 1999 – 2011.” The show is made up of architectural renderings, drawings, sculptures, installation videos and set pieces, all tied to Kandor.

“The story is that Brainiac, an evil villain, was running around the universe, stealing cities, shrinking them, storing them in bottles and then taking them to his lair. And Superman goes and rescues his own hometown,” said Mary Clare Stevens, the show’s curator and Kelley’s longtime studio manager.

“And then Superman is forever then guarding and protecting the shrunken city of Kandor with all its tiny little inhabitants, including his parents and relatives presumably, and he's keeping that in the Fortress of Solitude.”

She explains the project fits within Kelley’s other interests: alienation, historic depictions of the future, the nature of memory and nostalgia, and how we project onto self-created narratives.

You begin your visit in a room with a large banner that says ‘Welcome to KandorCon 2000,’ part of an imagined convention of Kandor enthusiasts.

Against the wall you’ll find a series of Superman comic book panels, each depicting the city of Kandor, made by various illustrators over the years. You can see architectural models by local SCI-Arc students of the fantasy cities, and a video of an actor who looks like Superman caressing a bell jar while reciting poems by Sylvia Plath, author of “The Bell Jar.”

But just as you feel it’s getting a little obscure, you walk into a dark room that is filled with 21 large glass bell jars, each on its own stand, each filled with its own little imaginary city made of colored resin. The jars are made of tinted glass and the whole effect is quite beautiful.

“It almost looks more like some kind of modernist sculpture versus a city. It's a very radical interpretation of a city. So there's this openness about what architecture is, what a city is,” Stevens said.

“It's really a breathtaking experience to go in there,” said KCRW art critic Hunter Drohojowska-Philp. She knew Kelley well and even she was stunned by this room. “There's just a sense when you see the work in reproduction that it's a bit more casual than it is. I and many of my colleagues were absolutely astonished at the obsessive level of crafting detail in almost everything in that show and the way those bottles had to be hand blown glass done in Austria… the whole operation of finding that person and developing that technology was really the Kandor triumph.”

Drohojowska-Philp explains the fascination held by Kelley – and fellow LA artist Catherine Opie, also a guest on this DnA – for utopian architecture and cities. Both Los Angeles itself and its 20th century buildings, as well as movie depictions of the future were a source of inspiration.

The Hauser & Wirth show closes this weekend with a series of experimental music performances inspired my Kelley’s own musical forays, including with the Detroit proto-punk band he founded, Destroy All Monsters. 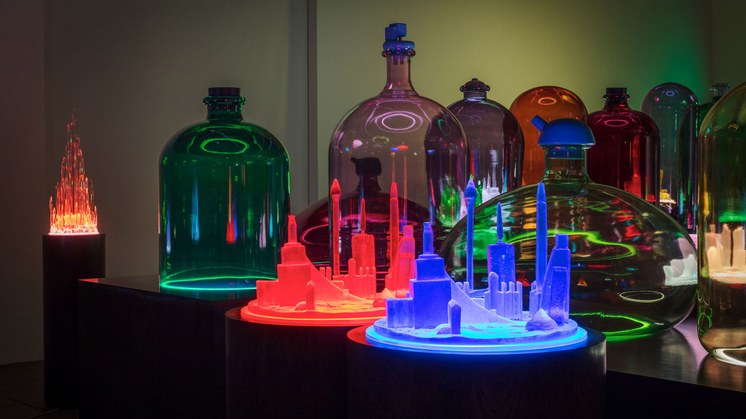 You may have seen LA photographer Catherine Opie’s photos of the LA freeways empty of cars, or of Elizabeth Taylor’s belongings, or of her own naked body, carved and...