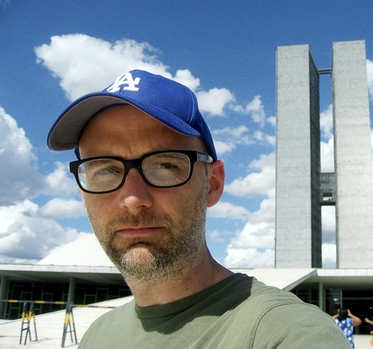 Chances are, you know Moby best for his electronic dance music, often featured here on KCRW. But it turns out the eclectic-minded musician has another life, as an architecture buff who recently moved to LA and now writes a blog about buildings here he loves. The blog is called, simply, Moby Los Angeles Architecture Blog, and features his photos of local architecture—from commonplace courtyard apartments to iconic houses by Frank Lloyd Wright—as well as his musings on the urban environment. In fact, many of the photos are taken in Moby's Hollywood Hills neighborhood, where he himself owns a very architecturally interesting house. Frances met Moby last week, at A+D Museum’s Celebrate event, and asked him whether he had a secret architecture background.

Moby posted this photo of a friend's house to illustrate the often misleading facades of LA homes. "when seen from the outside with its black metal door it kind of looks like a crystal meth dispensary with shrubbery," he writes.

Moby continues: "but then you walk in the front door and you see gigant-o (that’s a technical term in architecture circles) windows looking dramatically out over the hills and mountains and griffith observatory and downtown."

Chances are, you know Moby best for his electronic dance music, often featured here on KCRW . But it turns out the eclectic-minded musician has another life, as an...

For all of LA's sprawl and suburbia, there is a part of our city that has tried hard to be a mini-Manhattan: LA’s corporate downtown.